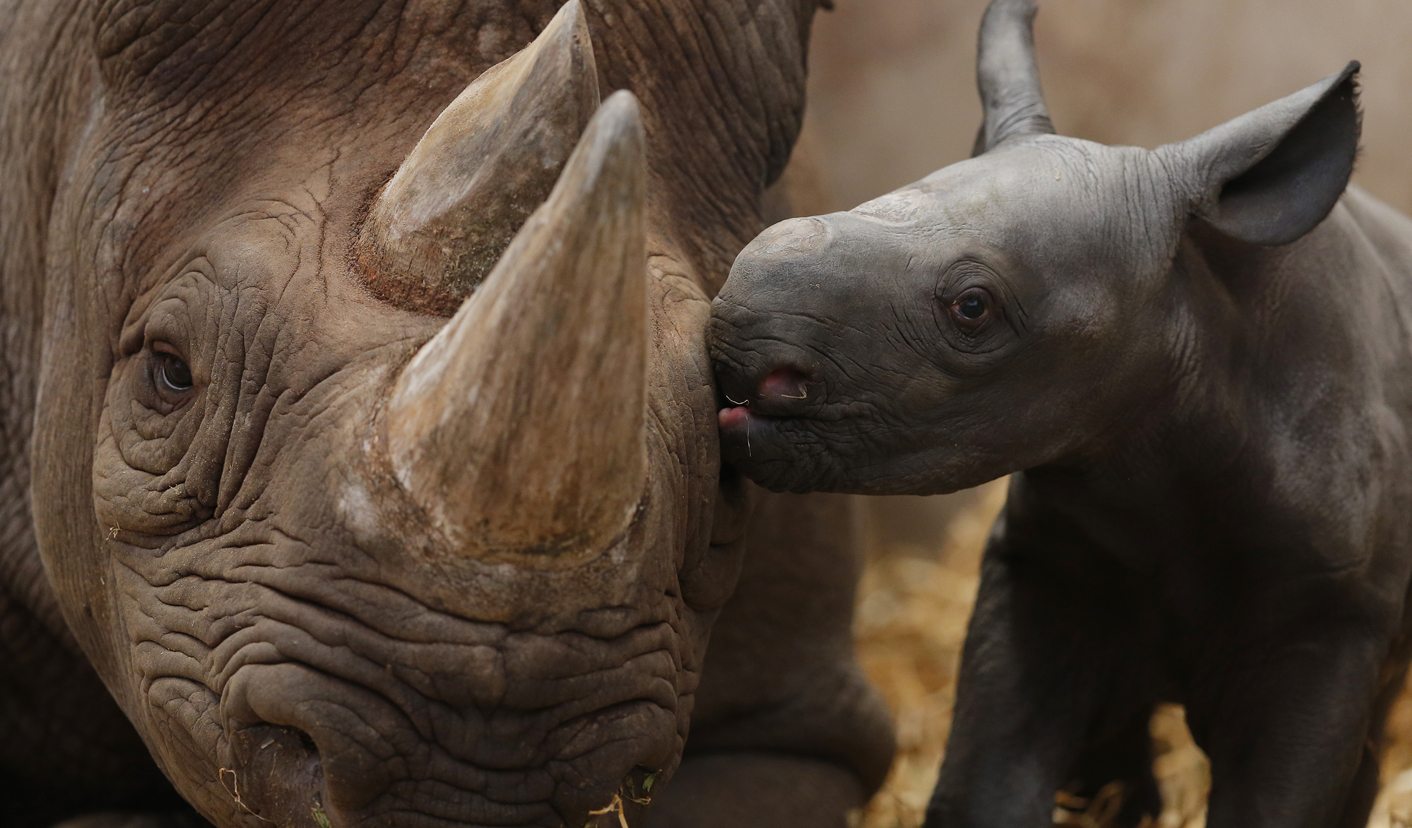 South Africa’s Cabinet is taking unprecedented action to protect the rhino population after it finding that the country is under a “national security risk”. Rhino poaching has now been elevated to a “priority crime” with investigations coordinated by the Hawks, and the SA National Defence Force has been deployed to assist with border security. Cabinet also wants to invest in drones and other new technology to detect poachers. It is the closest post-democracy South Africa has come to going to war – and it’s within our borders. By RANJENI MUNUSAMY.

While all eyes were on the national budget presented by Finance Minister Pravin Gordhan on Wednesday, the Cabinet adopted extraordinary measures to combat the country’s rhino poaching crisis.

“We see it as a war and will fight it as such,” Minister of Water and Environmental Affairs Edna Molewa told a media briefing on Thursday. Part of the far-reaching measures under consideration is the re-erection of the fence between Mozambique and South Africa at the Great Limpopo Transfrontier Park.

Molewa said 75% of the world and 80% of Africa’s rhino population was in South Africa and it therefore had to take more initiative to stop the killings. According to government’s tally, 128 rhino have been poached in South Africa since the beginning of the year. The Kruger National Park continues to be the hardest hit, having lost 92 rhino in the past two months. Twelve rhino have been poached in North West, 12 in KwaZulu-Natal and eight in Limpopo.

“All efforts to protect the country’s rhino population are not just aimed at protecting a species from extinction, but also securing and conserving all South Africa’s natural resources. The fact that the criminal syndicates involved in rhino poaching also undertake other crimes means that this current situation can be considered a national security risk. It is therefore imperative that the national response be comprehensive as it threatens not only the sustainable development path of the country but also the heritage of future generations,” Molewa said.

She said she presented a report to Cabinet based on a national consultation process on rhino conservation. Cabinet adopted the recommendation to develop and implement a funding model for the conservation of the South African rhino population. The Department of Environmental Affairs and the Treasury will be discussing the establishment of a National Rhino Fund. This will be accompanied by a nationally coordinated fundraising strategy, Molewa said.

Rhino poaching has been elevated to a priority crime by the National Joint Operations Centre, which is coordinated by the Directorate of Priority Crimes Investigations (the Hawks). Forty-six people have been arrested in connection with rhino poaching this year, three of whom were couriers.

Molewa said her colleague, Minister of Defence Nosiviwe  Mapisa-Nqakula, was worried about the deployment from a legal perspective as the soldiers were not police officers and did not have, for example, powers of arrest. Their powers, therefore, have to be spelt out so they have the appropriate authority to police the areas they are deployed.

Molewa said SANParks has also received additional funding from the Treasury to increase security in the Kruger National Park.

Cabinet also wanted to invest more in technology such as drones and heat detectors, as well as increasing ground coverage and area integrity by personnel, Molewa said. She said there should also be research into new technological innovations to assist in tracking down poachers.

“Greater cooperation is being sought from communities living adjacent to protected areas housing rhino, with field rangers being employed from some of the impoverished villages.  It is hoped that through interaction with communities, intelligence that could contribute to the arrest and conviction of alleged poachers, couriers and syndicate bosses would result,” said Molewa.

Among the measures being considered by the South African government is the re-erection of the fence on the Mozambican border at the Great Limpopo Transfrontier Park. An open stretch of about 40km is now considered a vulnerable point of entry into the Kruger National Park, with some poachers believed to be living in a village on the Mozambican side of the border.

Molewa confirmed there were bilateral engagements with neighbouring states so that there is “not just free movement of poachers”. South Africa’s security agencies are part of the discussions, she said.

Government also signed a Memorandum of Understanding with the Socialist Republic of Vietnam to increase collaboration on biodiversity and conservation matters. The action plan in this agreement includes measures to target syndicates as well as the exchange of intelligence information.

Molewa said there were still difficulties in convincing ordinary people in Vietnam that rhino horn did not have healing powers. She said her counterpart in Vietnam told her he went to the extent of telling his citizens that if rhino horn was able to cure cancer, people in South Africa would not have the disease. However, the quest to acquire rhino horn continues unabated.

Molewa said the feasibility of dehorning all black rhino and key white rhino populations has been questioned. This was due to costs, risks to the rhino, the potential biological and social impact, and the logistics of undertaking an extensive dehorning exercise. There is also the financial and biological impact of repeat dehorning, considering that the horn grows back. A dehorning study commissioned by the Department of Environmental Affairs found that dehorning is only a deterrent and only a viable option for small populations where other security measures are in place, Molewa said.

Molewa will lead a South African delegation to the CITES (Convention on International Trade in Endangered Species of Wild Fauna and Flora) COP 16 in Thailand where they will looking into possible discussions on the unbanning of rhino horn trade. These are part of the “extraordinary measures” which could be looked at to stop the illegal rhino horn trade.

The deputy director-general for biodiversity and conservation in the Department of Environmental Affairs, Fundisile Mketeni, said there was no single solution to the crisis of rhino poaching, and the South African government could not turn a blind eye to any option which could possibly work to prevent the killings.

“Rhino trade is banned but we are still losing rhinos,” he said.

Mketeni said South Africa currently had an estimated population of 18,700 white rhino and three sub-species of black rhino, totalling about 2,000. Only 12 of the black rhino have been killed as they are able to fight and hide in thick bush. Most of the rhino poached in South Africa have been white rhino.

Mketeni said the mortality rate has not yet surpassed the birth rate but the department was closely monitoring the figures. DM