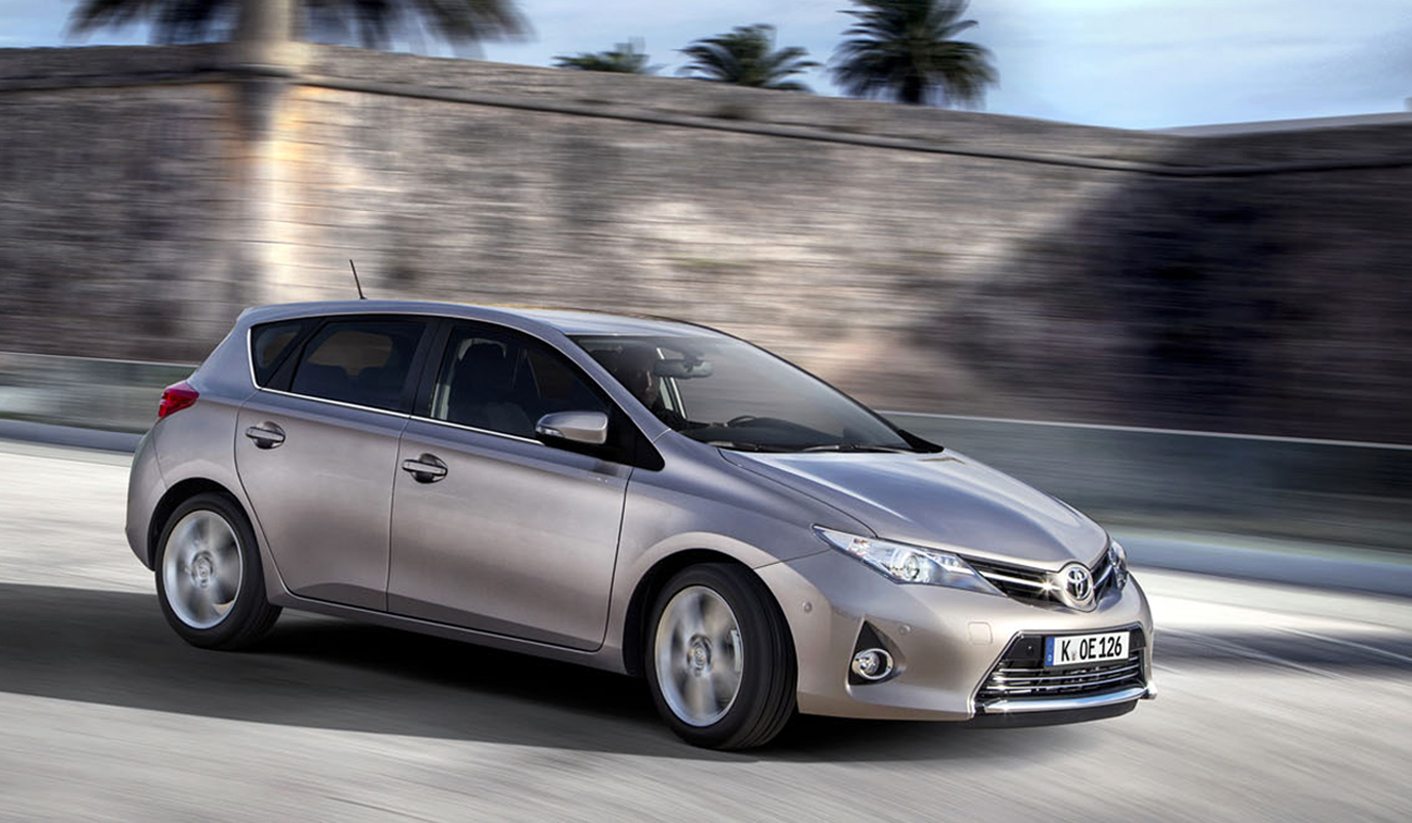 Toyota may be the biggest motoring brand in the world, but the success of its cars relies more on pragmatic qualities such as reliability and resale value, than on emotive or aspirational appeal. Or that used to be the case. The 2012 arrival of the 86 sports coupé signalled a yearning for creating more spirited, more desirable machines. The all-new Auris suggests that it’s a trend Toyota is intent on extending to its mainstream offerings. By DEON SCHOEMAN.

The previous-generation Auris was an awkward car, with an awkward nameplate. After all, what exactly is an Auris? It’s a word that sounds faintly rude, so that you feel as if you’re saying something offensive simply by mentioning the name.

It didn’t help that the hatchback’s bland, featureless styling made it look like… well, like an Auris. Of course, the automotive underpinnings were solid and reliable enough, in true Toyota fashion, but in a market as competitive as the South African one, the Auris deserved better.

The old Auris is a symbol of a bigger and more pressing problem facing Toyota. As the world’s biggest car maker, it has a massive customer base, and a brand identity forged from sensible and predictable attributes: reliability, practicality, good after-sales service, and decent resale value.

In other words, buying a Toyota is buying peace of mind. And that fact alone has earned the brand many millions of vehicle sales over several decades.

But in the 21st-century motoring world, emotive appeal has become as important as all those pragmatic attributes. Style and desirability are vital to the sales success of even the most mainstream of models, while brand reputations need to embrace more than sensible traits.

It’s a fact that will not have escaped Toyota. And while the Japanese auto maker may have offered its brand loyalists the excitement of niche models such as the Celica, the Celica Supra and the MR-2 in the past (let alone rare classics such as the GT2000), its contemporary line-up has lacked anything truly aspirational for some time.

The arrival of the Toyota 86 changed all that. Launched in a flurry of hype last year, the two-seater sports coupé almost instantly demanded a recalibration of public opinion as far as the brand was concerned.

The 86 established most convincingly that Toyota can conceive and produce a dynamic and exciting car, even in the mass market context. But it also posed the question whether its arrival signalled the start of a new era of more imaginative, emotive products from the brand.

The answer, at least in Toyota’s opinion, is to be found in the all-new Auris. Okay, so it’s still been saddled with that awful name. But the good news is that the hatchback looks bespoke and striking, with a visual edge that is light years removed from its pedestrian predecessor.

The new Auris looks so good that, somehow, saying the word doesn’t seem quite as offensive any more…

The shape is certainly keener and more striking, with a lower roofline, a steeply raked windscreen and lower, more athletic stance. That it’s also slightly longer only adds to the more aerodynamic profile.

Toyota will point to the prominent grille, with its large lower air intake ad its V-shaped, chrome-trimmed grille, the slanted multi-element headlights and the carved surfaces of the rear as the primary reasons for the newcomer’s attraction.

But much more important is the fact that this Auris actually exudes some character. It is now a hatchback that turns heads – and for the right reasons.

The interior can’t quite live up the zesty styling’s promise, mainly because there’s still too much that looks more convincing than it feels. Perhaps I was expecting too much from what is, after all, a mainstream model. But to its credit, there’s more eye candy here than in the immaculately presented, but rather sterile space that is the VW Golf’s cockpit.

The packaging is efficient enough to create a pleasing sense of space, and the dashboard presents its instruments, controls and switchgear with flair and panache. Silver detailing lifts the otherwise sombre colour scheme, and the audio panel adds some colour and illumination to the dashboard.

The model supplied for this encounter was the top-line 1.6 XR CVT, which offers a lavish list of standard kit. Of course, it has all the usual mod cons – leather, climate control, keyless entry and operation, a trip computer, auto-activating headlights and windscreen wipers, Bluetooth, a screen-based interface for the sound system – and there’s a lot more.

While so much standard equipment is to be expected in a flagship model, the more affordable variants still manage to treat their occupants to a comfortable and convenient motoring experience. Even the baseline X and Xi models offer the likes of USB/iPod audio connections, electric windows and mirrors, and a leather-trimmed steering wheel.

Keeping occupants of the Auris safe is a comprehensive mix of active and passive safety measures. Front, side, curtain and a driver’s side knee airbag are standard on the test car, while active systems incorporate include ABS anti-lock brake control, electronic brake force distribution and emergency braking assistance.

It didn’t take me long to get comfortable behind the Toyota’s multifunction steering wheel. There’s ample adjustment scope to get the ergonomics just right, and the seats feel well-bolstered and supportive. There’s a decent amount of space for rear passengers, too, although the high waistline and tapering roof can be a bit claustrophobic for taller folk.

The 1.6 XR CVT links a high-tech 1,6-litre petrol engine to continuously variable transmission (also known as a CVT). As CVTs go, this one’s not too bad, keeping the engine ticking over at optimum revs and varying the effective ratio accordingly.

You can also change “gears” sequentially, which creates the illusion of swapping between six “virtual” ratios. Together with the car’s Sport mode, the result makes the new Auris feel brighter and more involving.

However, the CVT shows its rubber-band character all too easily when pressing on, and while I understand that the system’s inherent efficiency is attractive from a fuel saving and eco-awareness perspective, it just isn’t as good as a manual.

The engine, though, is a willing mill. On paper, its 97kW at 6,400rpm and 160Nm at 4,400rpm doesn’t augur well from a dynamic perspective, but it’s actually much more willing than those figures suggest. The trick is to keep the revs up and in the power band – which infers driving with a level of enthusiasm.

Do so, and you’ll also get to sample the new Toyota’s road manners. If you were hoping for some of the 86 coupé’s cut and thrust dynamics, you’ll be disappointed. But in C-segment hatchback terms, the Auris feels agile and sprightly.

The chassis set-up clearly favours comfort, and feels a little soft when driven with a measure of enthusiasm. That compliance is welcome when negotiating our ever deteriorating roads, but I’d happily trade some of the plushness for a slightly tauter set-up.

That’s especially true when tackling a mountain pass or a sinewy country road. But then, the XR CVT is by no means a sports car or a hot hatch, and its target market extends well beyond the petrolhead level.

Still, pedalling the Auris along briskly is a mostly pleasant experience. Overall refinement is definitely in a more sophisticated league than before, and the engine’s eagerness translates into willing performance. The 0-100km/h dash is completed in 11,0sec, and top speed is around the 200km/h mark.

The Auris also doffs a hat to the need for more efficient and eco-friendly cars. Its driving mode can be set to optimise consumption, for instance. The factory-claimed consumption figure is 6.1 litres/100km, with CO2 emissions rated at just 143g/km.

So, does the new Toyota Auris break the mould? In mass market terms, the new version looks crisp and distinctive, with plenty of design flair, and a strong presence. It attracts attention for all the right reasons.

The Auris is also further proof of Toyota’s passenger car rejuvenation, and underscores its intention to create more exciting, more distinctive cars that are fun to drive, and eco-friendly to operate.

Here’s another bit of good news: pricing across the new Auris range is keen, with the entry-level 1.3X retailing for under R200,000, while the flagship model tested here costs R265,600. A five-year/90,000km service plan is standard, too.

No, the new Auris 1.6 XR CVT is not perfect – I would prefer a manual gearbox any time of the day, and the suspension could be tauter. But in broad, overall terms, the Auris has winner written all over it. And you might hear more people saying the word Auris again, too. DM