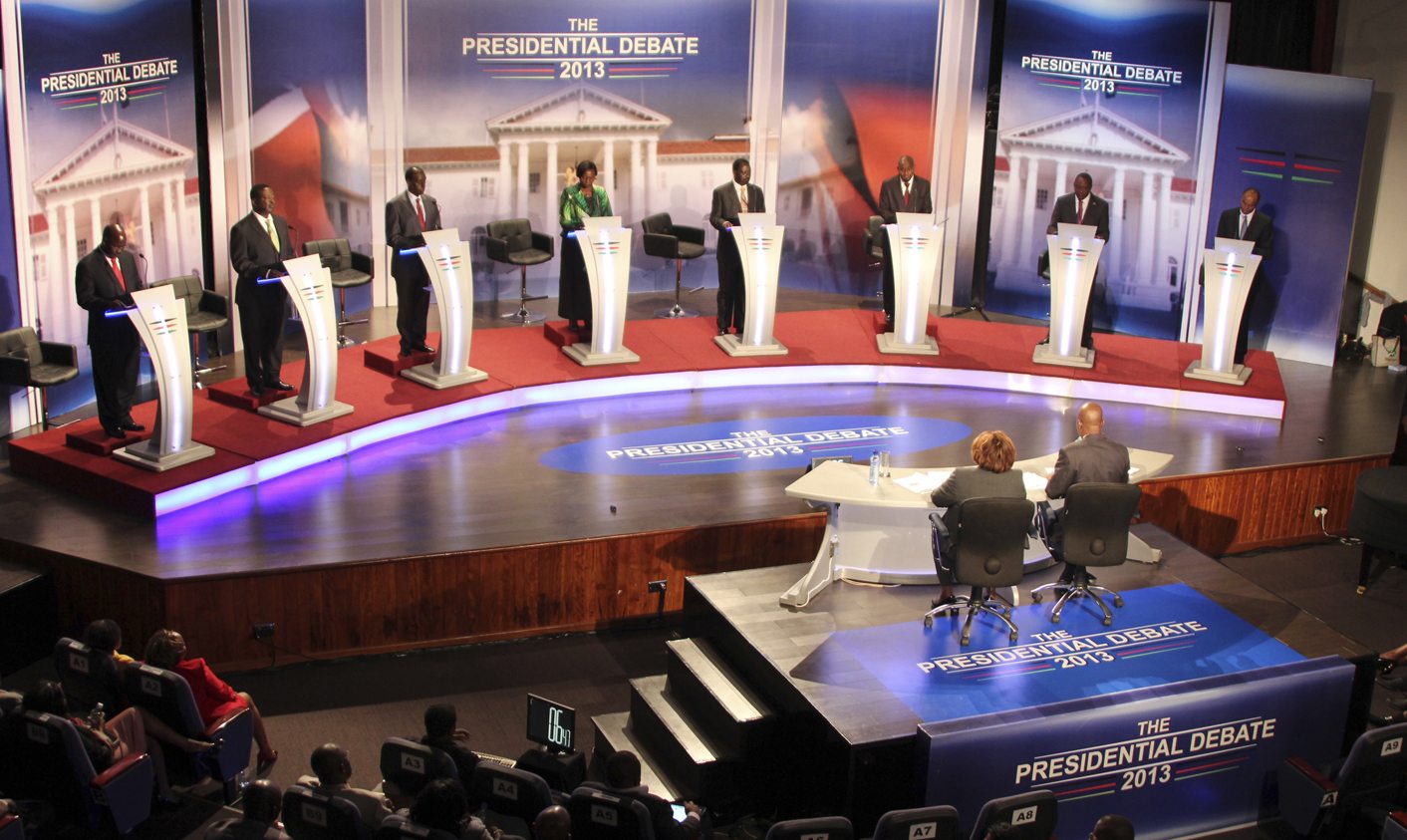 Kenya’s eight presidential candidates took part in the second and final debate before the 4 March elections on Monday evening. Each contestant proved a star at saying very little of substance in the three-hour discussion. By GREG NICOLSON.

Standing in Nairobi’s Uhuru Park on Sunday, six of Kenya’s eight presidential candidates joined hands to pray for peace in front of a crowd of thousands. With the 2007 vote descending into ethnic violence, in which 1,133 people were killed and more than 350,000 displaced, peace has been a running theme in the lead-up to the country’s 4 March presidential election. In Uhuru Park, preacher David Owuor had the candidates vowing that 2013 would be different and swearing oaths as though marrying non-violence.

A day later, the candidates met again in the theatre of the Brookhouse International School, Nairobi, for second presidential debate in the country’s history (the first was on 10 February) inside the school’s medieval-style buildings. This time, the candidates stood a metre apart, behind modern lecterns.

Former United Nations secretary general Kofi Annan warned at the weekend that electoral violence and ethnic rivalries could once again undermine the elections. Despite a new constitution and improved role of the judiciary, Annan sent a clear warning to the presidential hopefuls, some of whom arrived at the debate in helicopters. “Intimidation, electoral violence and ethnic rivalry have the potential to undermine and jeopardise the whole process,” Annan said in a statement. “And that is why recent violent events and increasing tensions in the run-up to the elections are deeply worrying. Kenya cannot risk a return to those dark days.”

If the presidential debates were meant to offer Kenyans a chance to evaluate candidates so they could vote along policy or ideological lines instead of ethnic allegiances, they failed.

The first issue discussed on Monday evening was the minimum wage. Candidates agreed Kenyans need to earn a living wage and government needs to rein in the cost of living while increasing job opportunities. Or that’s what it seemed everyone agreed on. Unlike presidential debates in the United States that generally feature only the Republican and Democrat candidates, the Brookhouse stage was full of hopefuls, each offering a snippet on a poor or even irrelevant question before the moderator was forced to proceed. With no time for in-depth follow-ups, the politicians could deflect and obfuscate.

One of the winners of the night was ARC candidate Mohamed Abduba Dida, who has no chance of winning the election. He was able to play to the crowd while the others plied empty statements and denied they were involved in scandal. The moderator brought up corruption charges with each particular candidate (most have been involved in government for years and are associated with a good scandal or two along the way) and, in turn, each denied the allegations. “Do you expect a thief to accept that they have stolen?” Dida respectfully asked the moderator when the questioning was clearly useless.

Each candidate supported freezing or rolling back parliamentarians’ salaries, a pledge unlikely to eventuate as members of parliament continue to try to boost their remuneration packages. Karua, the sole woman in the group, was focused and tried to slate the others on their links with corruption, or in Kenyatta’s case, the 2007-08 post-election violence. Kenneth dropped the same lines that have made him popular on Facebook and Kiyiapi was honest enough to admit that “power, raw power” drives Kenyan politics.

But the night was really about Odinga and Kenyatta, whose Cord and Jubilee coalitions face off for the presidency position in next Monday’s election. Kenyatta initially refused to pitch, citing biased questions in the first debate. The son of the country’s first president, Jomo Kenyatta, and the country’s richest person, he has been charged by the International Criminal Court in relation to the 2007-08 post-election violence.

Kenyatta has maintained that the ICC charges shouldn’t affect the election and has dismissed potential sanctions that could come from cautious foreign governments by claiming that the economy will survive on trade with neighbouring countries and the Chinese. “I want to say to foreign nations and mostly, and not all of them, because the nations that have been issuing such threats are the ones that colonised us in the past. Even as I see it they are trying to colonise us by imposing a certain leader on us because that leader will provide them with what they need,” he said in a December radio interview.

The charges, however, have obviously rattled Kenyatta. It’s believed he made a powerful pact to join forces with fellow ICC accused William Ruto and secretly agreed to support the election of Musalia Mudavadi. When Mudavadi made the pact public, Kenyatta’s supporters were angered by the deal, leading Kenyatta to claim he was persuaded by “dark forces” to be Mudavadi’s running mate. He later claimed, “Shetani ashindwe (the devil has been defeated)” and announced his candidacy for president.

With Ruto as his running mate, Kenyatta will have strong support from Central Province and the Rift Valley. His Jubilee Coalition is building is focusing on the issue of land reform, promising more efficient use of government land, a reverse in the  pattern of fragmentation, with smallholder farmers on private land, and to establish individual land rights for those on community land.

On Monday night, however, it was Kenyatta who came under fire for the amount of land he owns. “You cannot allow a hyena to protect your goats,” Odinga told the country. Kenyatta, the country’s top landowner, responded: “I have never been accused of grabbing any land.  The land we own as a family is acquired through willing-buyer-willing-seller. We shall ensure that land is used as a factor of production… The National Land Commission should be left to handle the emotive issue of land in this country.”

When it came to why many of the displaced persons from the 2007-08 post-election violence haven’t been relocated, most candidates said it was due to government failure.

Prime Minister Raila Odinga also comes from political stock – he is the son of the country’s first vice president, Oginga Odinga. A longtime opponent of former president Daniel Arap Moi, he was arrested in the 1980s and 1990s as he and his high-profile father were targeted by government as opposition forces. He ran against current President Mwai Kibaki in 2007 and became prime minister in the government of national unity, formed in response to the post-election violence.

Odinga’s coalition has committed to moving past Kenya’s tribal politics (as have the other contenders) and the prime minister claims he will uphold and implement Kenya’s new constitution, which he campaigned against. Coming under attack on Monday for a recent land purchase of his own, Odinga also claimed all his dealings were above board.

Apart from such half-answers and veiled attacks, the eight candidates had little chance to differentiate themselves. No one offered details on how to improve the plight of the landless. Foreign policy barely rated a mention (despite Kenya’s incursion into Somalia and other concerns on the continent) and there were no clear indications of what the candidates would do to reduce unemployment and increase jobs.

The fact, however, is that most Kenyans will have already made up their minds on who they will vote for and, sadly, it’s likely be along ethnic lines. A minority of swing voters might have looked to the debate to sway them one way or another, but in the end it was charm, delivery, and luck of the questions that would determine a winner on Monday night.

In that case, one might expect Dida to be Kenya’s next president. He delivered some of the lines of the night, including this one on parliamentary privileges: “Jesus would not drive home with a convoy of six cars when it’s raining on innocent Kenyans on the streets.”

But with Odinga and Kenyatta going for gloss over substance, one can only hope that they believe in their commitments to peace more than their posturing on Monday evening. DM