Despite Venezuela Homecoming, Chavez Still Out Of Sight

Despite Venezuela Homecoming, Chavez Still Out Of Sight 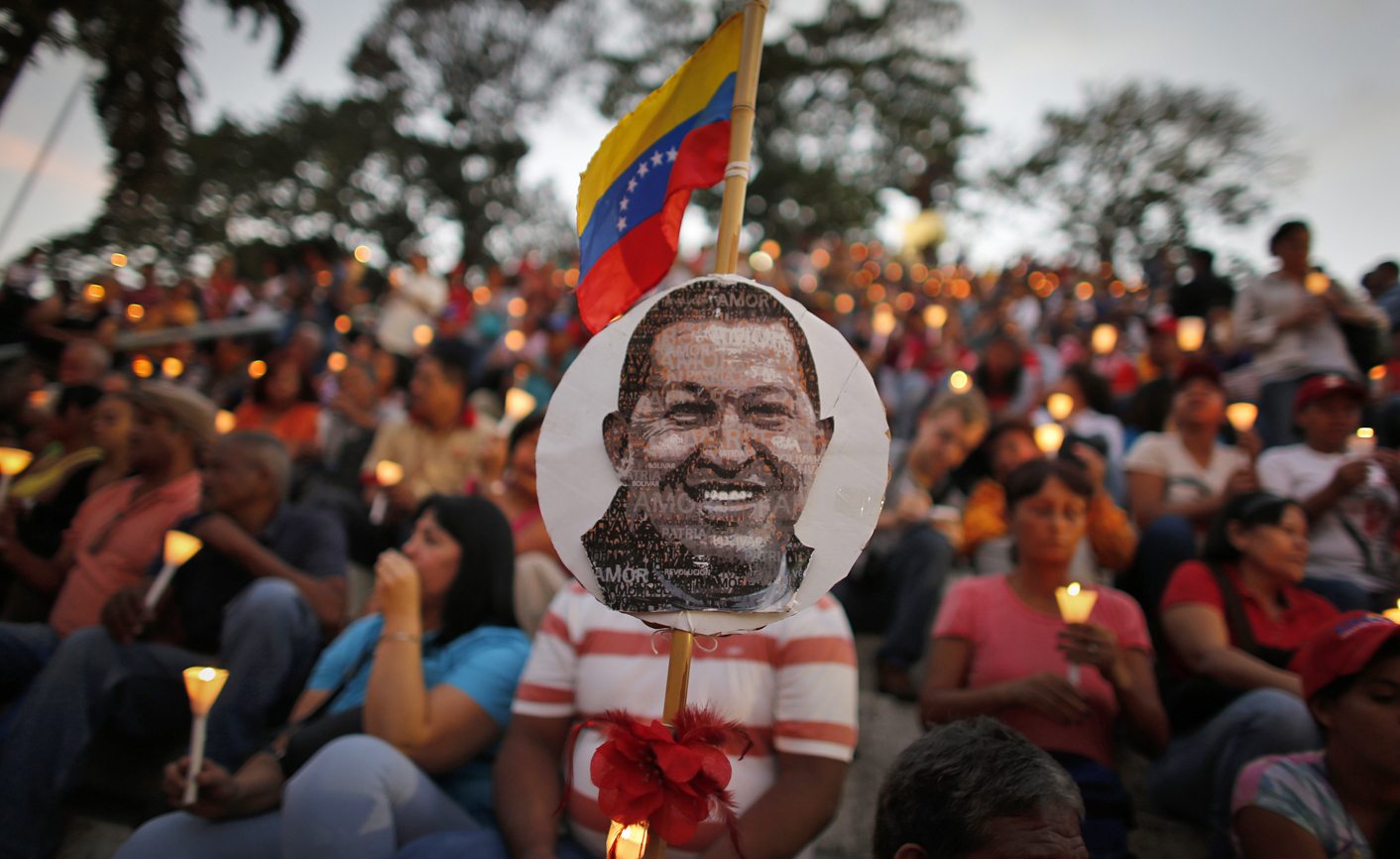 From a billboard bearing his face, to a giant inflatable doll and posters hawked on the street below, there is no shortage of images of Hugo Chavez at the Caracas military hospital where he has been since returning from Cuba. By Diego Ore and Daniel Wallis.

Yet there has been no sight of the 58-year-old Venezuelan president since he came home – during the night and without photos or fanfare – a week ago.

His surprise return to Caracas raised supporters’ hopes of a recovery after December surgery in Havana that was his fourth operation in 18 months. But other than the government saying Chavez’s breathing problem has worsened, there have been no new details about the patient on the well-guarded ninth floor.

“We don’t even know if he’s really here,” said Marlene Vegas, 51, a housewife who lives near the military hospital. “We have only seen cars with dark windows going in and out.”

When Chavez first got back from Cuba, a crowd of supporters gathered outside to dance and sing “He’s back! He’s back!”, until hospital staff came out and asked them to keep quiet.

Now just a few curious onlookers and journalists loiter in front of the complex in the poor downtown San Juan neighborhood, watched by stern-faced uniformed and plainclothes security men.

A source inside said staircases to the ninth floor had been barred, and that the only doctors treating Chavez were Cubans.

Given the number of patients and staff at the facility, which covers more than half an acre (0.2 hectares) and employs 4,000 people, it will be harder for authorities to maintain the same secrecy around his treatment that Chavez enjoyed in tightly-run Cuba.

For the moment, though, their efforts appear to be working.

Nursing staff and others at the military hospital, where Chavez underwent chemotherapy in 2011, told Reuters they knew nothing about his current medical condition.

Apart from a few photos of Chavez in a Havana hospital bed that were released by the government, Chavez has not been seen nor heard from in public since his Dec. 11 operation. He won re-election in October but was unable to swear in at the start of his new term last month.

Some in the opposition say those pictures prove they were right all along, that the president is no longer fit to govern and that a new election should be organized within 30 days.

“Nothing is worse than being governed by uncertainty,” said Antonio Ledezma, the opposition mayor of Caracas. The Cuban hospital photos, he added, did nothing to dispel any concerns.

If Chavez died or had to step down, a new election would likely pit his preferred successor, Vice President Nicolas Maduro, against opposition leader and state governor Henrique Capriles, who lost to Chavez in the October election.

The government, which rejects criticism of being secretive about Chavez’s condition, accuses the opposition of seeking to spread doubt and destabilize the country.

“We show the photo and they tell us it’s Photoshopped and they don’t believe it,” Information Minister Ernesto Villegas said of some opposition leaders. “If we show a video they will say it’s old, and now Chavez is back, they say he’s a clone!”

As conspiracy theories and speculation swirl, many Venezuelans are turning to social media in the hope of discovering any news.

At the weekend, authorities said they would investigate attempts to “destabilize and confuse” people – after Twitter messages circulated about a supposed fight at the presidential palace between the guards of two top Socialist Party figures.

Defense Minister Diego Molero addressed the tweets directly: he denied there was a rift, saying Maduro and his ministers were working “in perfect harmony” with the military, and that the armed forces were “more united than ever, waiting for the total recovery of our Commander Chavez.”

The possibility of such a recovery looks increasingly remote. Last week, Chavez’s friend and leftist ally, Bolivian President Evo Morales, said he had been unable to see the Venezuelan leader during a visit to Caracas because he was receiving treatment.

Given Chavez’s clearly delicate condition, opposition supporters scoffed days later when Maduro said he and other government officials had held a series of meetings with the president on Friday that lasted more than five hours.

The government says the former soldier has difficulty speaking because he is breathing through a tracheal tube, but that he gives orders by writing them down.

“We left full of his energy and force … the immense wisdom he has to focus on themes, on problems,” Maduro said in a midnight speech on state TV from the military hospital.

“We want to continue giving our deep gratitude for the support of the Venezuelan people, which has allowed us to get through these days in peace.” DM

Photo: People hold candles during a praying ceremony for the health of Venezuelan President Hugo Chavez in Caracas February 22, 2013. Venezuela’s cancer-stricken president, Hugo Chavez, is still suffering respiratory problems after surgery in Cuba two months ago, the government said on Thursday in a sombre first communique since his homecoming this week. REUTERS/Jorge Silva.