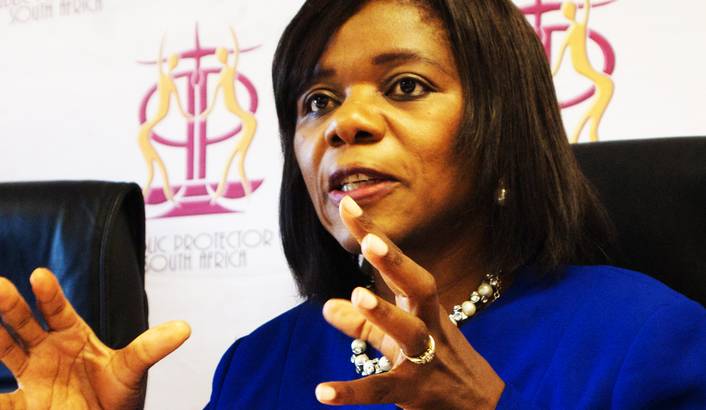 The ANC’s chairman in North West has been arrested in connection with the murder of the party’s regional secretary of the Kenneth Kaunda district, Oubuti Chika. China Dodovu is also the province’s MEC for co-operative governance and traditional affairs. North West premier, Thandi Modise, has called for calm in the wake of several arrests in connection with the Chika killing. In a statement, Modise said while she hoped “justice would be done”, the suspects were innocent until proven guilty. “It is on this basis that we support further and intensive investigation into the matter. We believe that MEC Dodovu will co-operate with the investigation,” she said. Seven suspects, including chairperson of the ANC Youth League in the province, Papiki Babuile, have been arrested so far.

Prince Sifiso Zulu has walked out of prison a free man after serving nine months of his three-year prison sentence. The socialite and businessman from Durban killed two people in the accident for which he was found guilty of reckless or negligent driving, failure to stop at a red traffic light, failure to stop after an accident and driving under the influence of alcohol. The Daily News reports Zulu applied for an 18-month special remission of sentence, announced by President Jacob Zuma in April, which was granted. KwaZulu-Natal correctional services commissioner Mnikelwa Nxele dismissed claims that Zulu was being favoured and released on early parole, saying there was “nothing underhanded” about Zulu’s release.

The Public Protector is considering investigating the minister of police for “possible abuse of power and coercion”, AfriForum says. The rights organisation said it had filed a complaint with Advocate Thuli Madonsela over minister Nathi Mthethwa’s handling of a protest march against farm murders. AfriForum says the minister declared the march illegal, even after the organisation got an urgent declaratory court order from the North Gauteng High Court that the march may proceed. “The Minister paid no attention to the court order and continued to handle the march as illegal,” said Ernst Roets, deputy CEO of AfriForum. Roets said Mthethwa’s spokesman made it clears that AfriForum should not expect a meeting with the minister as long as it used marching as a means to focus attention on farm murders. “ This is a case of blatant political coercion by officials who are serving their own political ideology at the cost of the general public,” Roets said.

A man convicted of fraudulently selling land in Lenasia has begged the Johannesburg Magistrate’s Court not to send him to jail. Bricklayer Mandla Dlamini, in a statement provided by a correctional officer, said he would “do anything”, including paying back money owed to the complainants, if the magistrate didn’t send him to prison.  He said he respected the processes of the court, as well as his guilty verdict, the statement said. The Gauteng housing department said Dlamini illegally sold land to residents in Lenasia and Enerdale, and promised to build houses for the buyers. The case has been postponed until 5 March for sentencing.

The Democratic Alliance is fighting the ANC’s attempts to reclaim power in Tlokwe (Potchefstroom). It has asked the North Gauteng High Court to rule on “irregularities” uncovered in the governing party’s attempts to regain power after its mayor was voted out in a motion of no confidence. DA leader in North West, Chris Hattingh, said the party was paying for its application using its own money, and that details of the irregularities would be revealed when the court hears the matter. “The DA believes that the ANC is resorting to irregular means to gain back power in an attempt to cover up fraud and corruption before it is exposed,” Hattingh said in a statement. He said the ANC driven motion of no confidence in mayor Maphetle Maphetle was based on documented allegations of fraud and corruption.

The South African National Defence Force has confirmed the death of two soldiers at the hands of a third troop. The incident took place in the eastern Free State. Brigadier-General Xolani Mabanga told Sapa there was a “criminal investigation going on”.  Gunner ML Hlubi is accused of allegedly shooting dead Lieutenant Thabiso Ernest Seithati and Gunner Zakhe Nkanyiso Khumalo before removing their bodies from the car and driving off.  The three were travelling from the Fouriesburg Military Base to the Kromdraai temporary base in a military vehicle at the time of the shooting on Friday.

Cosatu believes plans to name and shame government officials found guilty of corruption will make potential offenders “think twice before ripping off their fellow South Africans if they know that their family, friends, and neighbours will find out what they have done”. Cosatu spokesman Patrick Craven also praised the progress of the government’s anti-corruption task team, saying the labour federation hoped “this momentum would be maintained and that the tide of corruption and theft from the public purse had finally been turned”. But Cosatu wants this “tough approach” to be impact also on the business people who collaborate with those in government to defraud the state.

A new state-of-the-art maltings plant, which will cost R700 million, will reduced South African Breweries reliance on imported malted barley and help support small black farmers. BDlive reported that the plant, planned for Alrode in Gauteng, would start construction this year and will be completed by 2015. Head of the beer division, Mauricio Leyva said the maltings plant would have “significant cost saving and growth benefits for SAB”. He said the move made good financial sense, as it would reduce SAB’s exposure to “volatile international markets and replace a significant share of our imported malt and barley with local barley”. DM