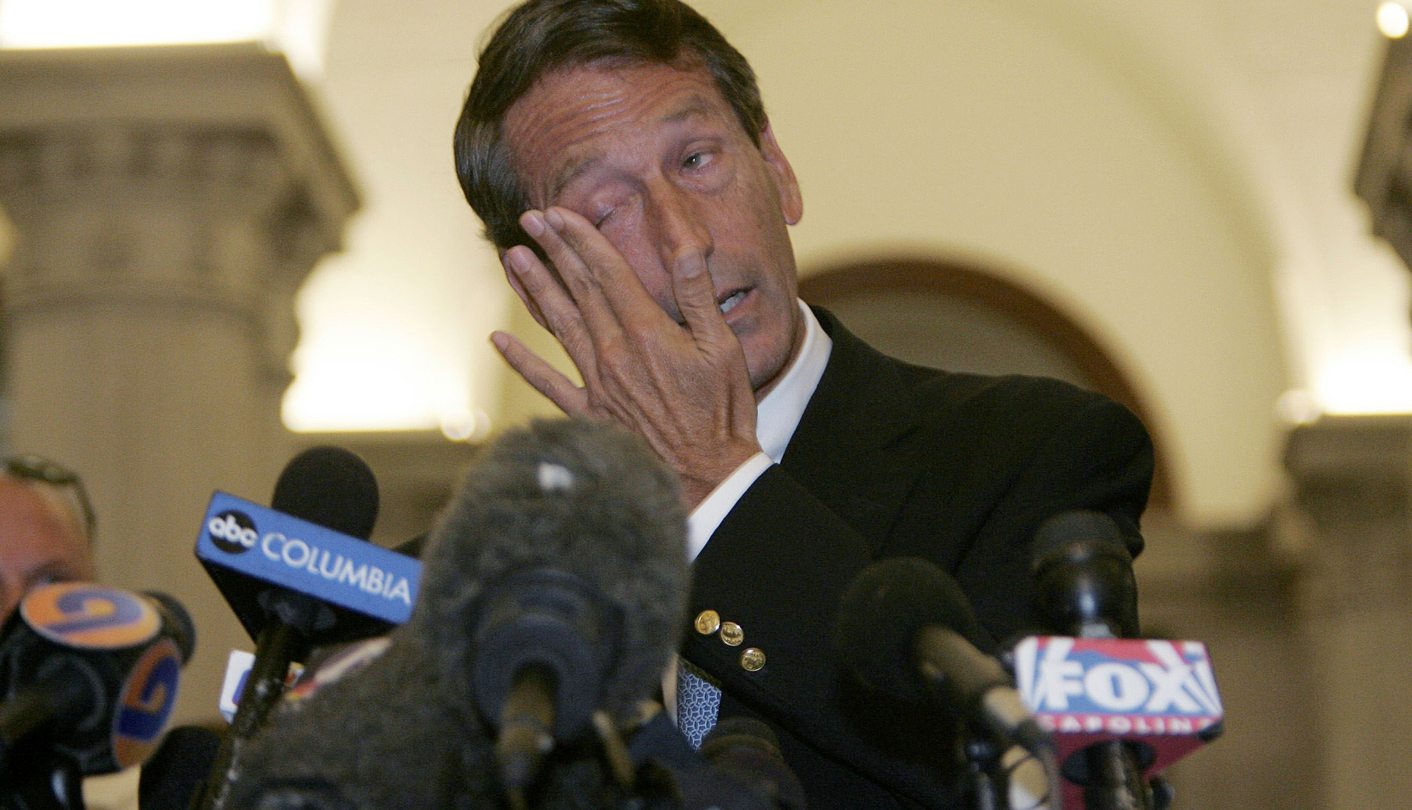 The appearance by a candidate for South Carolina's 1st Congressional District here last week was delayed. The event's co-host, an undertaker, had been detained at his funeral home by an unexpected "delivery." By Samuel P. Jacobs.

A couple of people in the audience laughed as they realized what sort of delivery a funeral home receives. Questions of life and death seemed oddly appropriate because the afternoon’s guest of honor was a man who is trying to undergo a political resurrection: former South Carolina Governor Mark Sanford.

As governor in early 2009, Sanford – a tanned conservative Republican who preached limited government – was widely seen as a potential candidate for president in 2012.

But then he disappeared for six days in June 2009, without telling his family or staff. It turned out he was in Argentina, visiting a woman with whom he was having an extramarital affair. The episode destroyed Sanford’s marriage and earned him a censure from state legislators who agreed that he had brought “dishonor, disgrace and shame” to South Carolina.

And that, it seemed, was the end of the Mark Sanford story.

He served out his term as governor but left office in January 2011 and headed for his family’s farm in Beaufort, South Carolina. He became a footnote in a state whose recent political history has been shaped by the rise of the conservative Tea Party movement and the legacy of the late Strom Thurmond, a one-time segregationist and governor who served in the U.S. Senate for nearly a half-century.

Now Sanford, 52, is back – in search of a dramatic comeback by running for the same congressional seat that he won almost two decades ago, before he was governor.

In talking about putting his life back together, Sanford gives off new-age vibrations. During an interview with Reuters, he seemed well-versed in the language of recovery and often referred to his “inner journey.”

Even without Sanford and reminders of his scandal, the race has the makings of spectacle: It features 16 candidates in the Republican primary on March 19, including Robert “Teddy” Turner, the rebel conservative son of Ted Turner, the liberal cable television billionaire.

For Sanford, it was a surprising opportunity created by the unexpected retirement of U.S. Senator Jim DeMint, which caused a shift in the state’s Republican leadership. Governor Nikki Haley appointed Representative Tim Scott to fill DeMint’s seat. The opening of Scott’s seat gave Sanford a chance to return to public life that Sanford said he found irresistible.

Given that voters are familiar with Sanford – some of whom have cast ballots for him five times – most analysts expect Sanford to outlast the Republican field, even in a district where some religious conservatives could find it hard to forgive him.

Many of the 15 other Republicans concede that they are hoping to finish second to Sanford, then have other candidates’ supporters rally around them (and against the former governor) in a primary run-off vote.

There is another twist: The Republican primary winner is likely to face on May 7 in a special election Democrat Elizabeth Colbert-Busch, an official at Clemson University and sister of comedian Stephen Colbert, who has been known to bring his antics into South Carolina politics. Colbert was scheduled to join his sister at fundraisers in New York and South Carolina this weekend.

The conservative district has sent a Republican to Congress since Ronald Reagan was elected president in 1980. So most political analysts in South Carolina expect Sanford to eventually win back his old congressional seat despite his scandal and a celebrity presence on the Democratic side.

But first, Sanford is making the case that he has learned from his fall and moved past his mistakes.

During a coffee gathering on Thursday, Sanford pointed to a woman in the audience he had talked with earlier.

During the interview, Sanford said the past few years have changed him for the better.

After confessing to cheating on his wife, he was stripped of his position atop the Republican Governors Association. Six months later, his wife divorced him. He is now engaged to Maria Belen Chapur, the Argentine journalist whom Sanford called his “soulmate” during a news conference after the scandal broke, and for whom Sanford gave up his old life.

After leaving the governor’s office and returning to his farm, Sanford said he spent time building a bridge, a cabin and barn with his four sons. He showed off a bruised fingernail, which he said was caused by a falling plank of wood.

“In the wake of so much destruction, I wanted to construct,” he said in the interview.

Sanford’s longtime friend Tom Davis, his former chief of staff, said that Sanford’s time in near-isolation was “Thoreauvian,” comparing the former governor’s days on the farm to the writer Henry David Thoreau’s psychologically therapeutic years living near Walden Pond in Massachusetts in the 1850s.

“I said to a buddy, ‘You know, I’m becoming a Buddhist Christian,’ which is sort of a weird way of putting it, but you know Buddhism focuses on the moment,” Sanford said. “I think that … Western society achievers, whatever your walk of life, are always focused on the next step.”

For the most part, Sanford leaves his personal life out of the campaign. He thinks that voters are willing to do the same – even as some opponents’ ads have questioned his honesty.

“I’ve experienced how none of us go through life without mistakes,” Sanford said in his first campaign ad released this week. “But in their wake, we can learn a lot about grace, a God of second chances, and be the better for it.”

Many people in the state backed Gingrich despite fresh allegations that Gingrich had once asked a former wife for an open marriage. Gingrich supporters said they were less concerned with Gingrich’s personal life than his politics, and that they favored him as a more conservative alternative to Mitt Romney, the Republicans’ eventual nominee for president.

But, “if it had been 25 years ago … good Lord,” said Anne Keigher, 75, an architect from Charleston.

At a time when Washington is viewed by voters as a politically gridlocked failure, Sanford talks about his three terms as a congressman as a success.

He also says he was railing about government spending before it was stylish. His sunny disposition can turn apocalyptic when he talks about debt and the value of the U.S. dollar.

The unfolding drama in Washington over taxes, debt and spending seemed a bit distant, however, when Sanford and 12 other Republican candidates appeared Thursday at a Golden Corral restaurant in Blufton. Each was given five minutes to make a case to members of the Beaufort County Republican Club.

Sanford did not mention his family nor the scandal that put him in national headlines. He did brag about shortening the wait times at the state Department of Motor Vehicles as governor.

Some of Sanford’s rivals are frustrated by the attention he gets. One candidate refused to answer questions about Sanford. Another dismissed the “air of celebrity” surrounding the race.

One challenger, Andy Patrick, a former U.S. Secret Service agent who praised his rivals for their conservative values, has sent out a mailer to voters attacking Sanford.

“Many will forgive,” it reads, “But how can we forget? Mark Sanford. The trust is gone.”

After the turmoil of the last four years, is Sanford comfortable with the attacks that are coming his way?

Photo: Then South Carolina Governor Mark Sanford wipes his eyes as he speaks to the media about his trip to Buenos Aires, Argentina and admits to an extramarital affair at the State House in Columbia, South Carolina, June 24, 2009. Governor Sanford said on Wednesday he was resigning as Chairman of the Republican Governors’ Association after admitting to having an affair and being unfaithful to his wife. “I’ve been unfaithful to my wife,” he told a news conference in the South Carolina capital of Columbia after returning from a secret private trip to Argentina. REUTERS/Erik Campos/The State