And the Oscar goes to … BAIL! 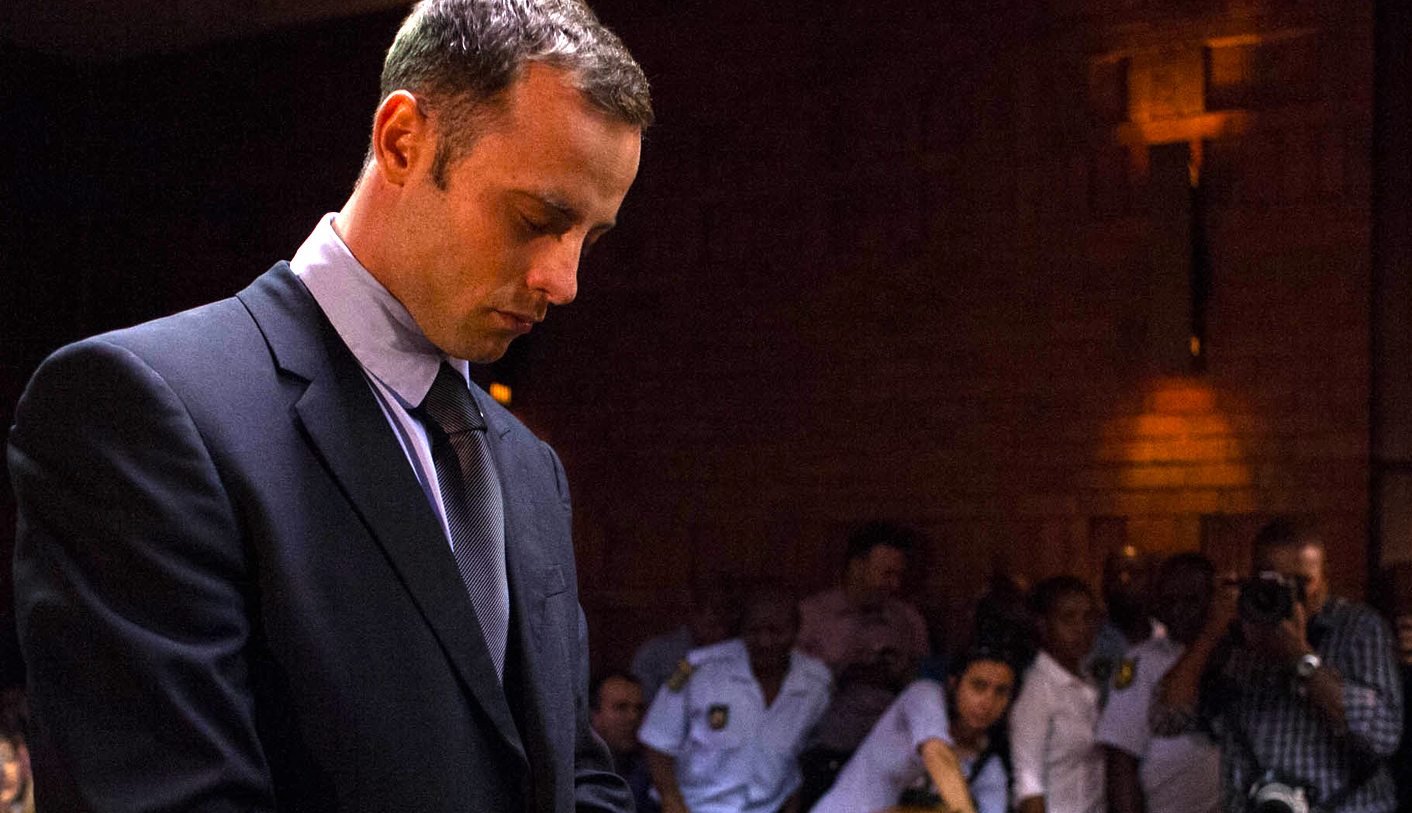 Eight days after Reeva Steenkamp died in a hail of 9mm bullets, Oscar Pistorius got his bail. After a lengthy ruling from Magistrate Desmond Nair, beamed live around the world, the murder-accused athlete has been released from police holding cells to await a trial beginning on 4 June. While the granting of bail is a positive sign for the Pistorius camp, Nair's ruling made it clear that he didn't buy a number of aspects of Pistorius's account of the events which led to the shooting of Reeva Steenkamp. By REBECCA DAVIS.

There has been a massive amount of interest in the Pistorius bail hearing this week, so it was natural that there would be a phenomenal level of public engagement with the delivery by Magistrate Desmond Nair of his ruling on Thursday afternoon. Though Nair justified his decision to not allow TV cameras to broadcast the hearing – and pointed out that cameras already treated Pistorius as if he were “some kind of different species” every time he appeared – his choice to allow a live audio feed from the courtroom for the ruling seemed to represent his concession to the media and public appetites.

Nair had previously hinted that his ruling wouldn’t be particularly comprehensive, but it sure didn’t feel that way. His ruling took just less than two hours to deliver, prompting many to query how he had found the time to write it in the short break between closing arguments and the ruling. Nair’s task was not an enviable one: this has been a hearing where both the prosecution and defence have failed to produce watertight arguments. In addition to the normal judicial pressure attached to such a ruling, Nair had an unprecedented amount of media attention upon him. The audio feed of the ruling was broadcast live not just in South Africa but globally – on CNN, for instance. Those without access to a radio or TV could listen to the live feed via YouTube.

Little wonder, with the eyes (or ears, at least) of the world fixed firmly upon him, that Nair took care to outline the reasoning behind his decision. At times his thoroughness seemed excessive – his historical excursion into Boer bail practices, for instance. But such was the impatience of a jittery audience, both inside and outside the courtroom, that whatever ruling he delivered would likely have felt too long.

Most trial commentators believed, going in, that Pistorius would be likely to emerge granted bail, so the outcome was no huge surprise. But it was also thought that this would most plausibly occur if the magistrate were to downgrade the offence from Schedule 6 (premeditated murder) to Schedule 5, as it is far more difficult to be granted bail under a Schedule 6 offence. Possibly the biggest surprise, then, was that Nair maintained the Schedule 6 classification – but went on to grant bail regardless, due largely to the weakness of the state’s case rather than the defence team’s having proved that Pistorius had exceptional circumstances to deserve bail.

Nair devoted much time to recapping the arguments of both the prosecution and defence: arguments which have now been aired in court several times. Having considered all the arguments, Nair said, it was not his job to decide whether Oscar Pistorius had committed a premeditated murder. But in terms of evidence, he felt that the state had met the minimum threshold to put forward a charge of premeditated murder: in other words, that the Schedule 6 offence would stand. The magistrate called for a brief adjournment directly after this announcement, and it must have been a tense one for the Pistorius family, who would have known that the chances of bail were now much slimmer than if Nair had downgraded the offence.

But if they were quaking then, they may have taken heart from Nair’s pronouncement that he considered that if the defence was able to prove that the state’s case was weak, this would constitute an “exceptional circumstance” demanding that bail be granted. In considering the strength of the state’s case, the magistrate had harsh words for the work of investigating officer Hilton Botha, listing all the slips and errors made by the cop: ranging from a failure to verify Pistorius and Steenkamp’s cellphone records, to mis-identifying a herbal supplement as testosterone. He also made reference to Botha’s shaky verbal performance under cross-examination: at one point, it appeared that every sentence of Nair’s started with the words: “Botha conceded that…”

The only issue on which he cut Botha some slack was on the matter of Botha having walked through the scene without wearing protective coverings on his feet. Nair didn’t seem to find this particularly outrageous – he suggested that most of the evidence would have been dealt with already by the time Botha blundered through the scene. But, despite making it clear that he believed Botha’s work on the investigation to have been shoddy, Nair was adamant: “Botha is not the state’s case”. It was a statement he repeated several times. The mere fact of having an incompetent investigating officer, in other words, does not automatically discredit all the state’s evidence. Nair added too that at this stage, so soon after the shooting of Steenkamp, it would be practically impossible for the state to already have assembled all the pieces of the puzzle.

Moving on the question of whether Pistorius should be granted bail, Nair had to consider whether Pistorius was a flight risk, and whether he was likely to harm potential witnesses. With regard to the former, Nair made it clear that he didn’t buy it. He spent more time on the latter factor, given the history of violent incidents brought forward by the state, but ultimately concluded that he didn’t have enough evidence to conclude that Pistorius had such a propensity to violence that he might endanger witnesses.

Taking all these factors into consideration, Nair said he was granting bail. When he made this pronouncement, there were audible celebrations from what some initially assumed were members of Pistorius’s family, but what turned out to be part of the Kenny Kunene entourage. Despite the fact that the state indicated that they were happy with a bail of R250,000, Nair returned to announce that bail would be set at R1 million. The size of this amount suggests that Nair is taking no chances: after all, nobody wants to be the magistrate under whose watch the most famous murder-accused man in the world skipped the country.

Nair also instituted a set of fairly draconian bail conditions. Pistorius cannot return to the Silver Woods estate in Pretoria or talk to its residents, presumably to ensure that no contact is made with potential witnesses. He has to surrender his passport and cannot apply for any travel documents. He also cannot set foot in the departures area of any airport. He must hand in his existing firearms, and cannot purchase any additional firearms until the trial is completed. He must report to a police station in Pretoria twice a week – and he cannot drink any alcohol or take any prohibited substances. They will be administering random tests for drugs and alcohol.

But Pistorius can comfort himself with the knowledge that the full trial will start relatively quickly, in a country where less high-profile defendants sometimes await trial for years. On 4 June, his trial will commence, meaning that prosecution and defence have just over three months to prepare cases that they hope will convince a judge. The prosecution will be hoping that the replacement of Hilton Botha with the SAPS’ most senior detective, Lieutenant-General Vineshkumar Moonoo, will help get their house in order – though some have pointed out that it is more difficult to lead an investigation when you weren’t on the scene as soon as possible afterwards.
The defence, meanwhile, will be hoping that Pistorius doesn’t do anything over the next few months to draw unwanted attention to him. It’s to be expected that his PR agency, Vuma Reputation Management, will be working hard at building up public sympathy for the athlete again after a bail hearing which has seen some of this ebb away. Given the media scrum which will inevitably attach itself to Pistorius’s every public appearance, however, it’s to be expected that Pistorius will be keeping a very low profile indeed.

For the family of Reeva Steenkamp, nothing changes. Their daughter, sister, niece is still dead; now cremated. As long as a trial verdict remains out of reach, their closure as to the events of Valentine’s morning will be delayed. DM