Pistorius bail hearing: Round One 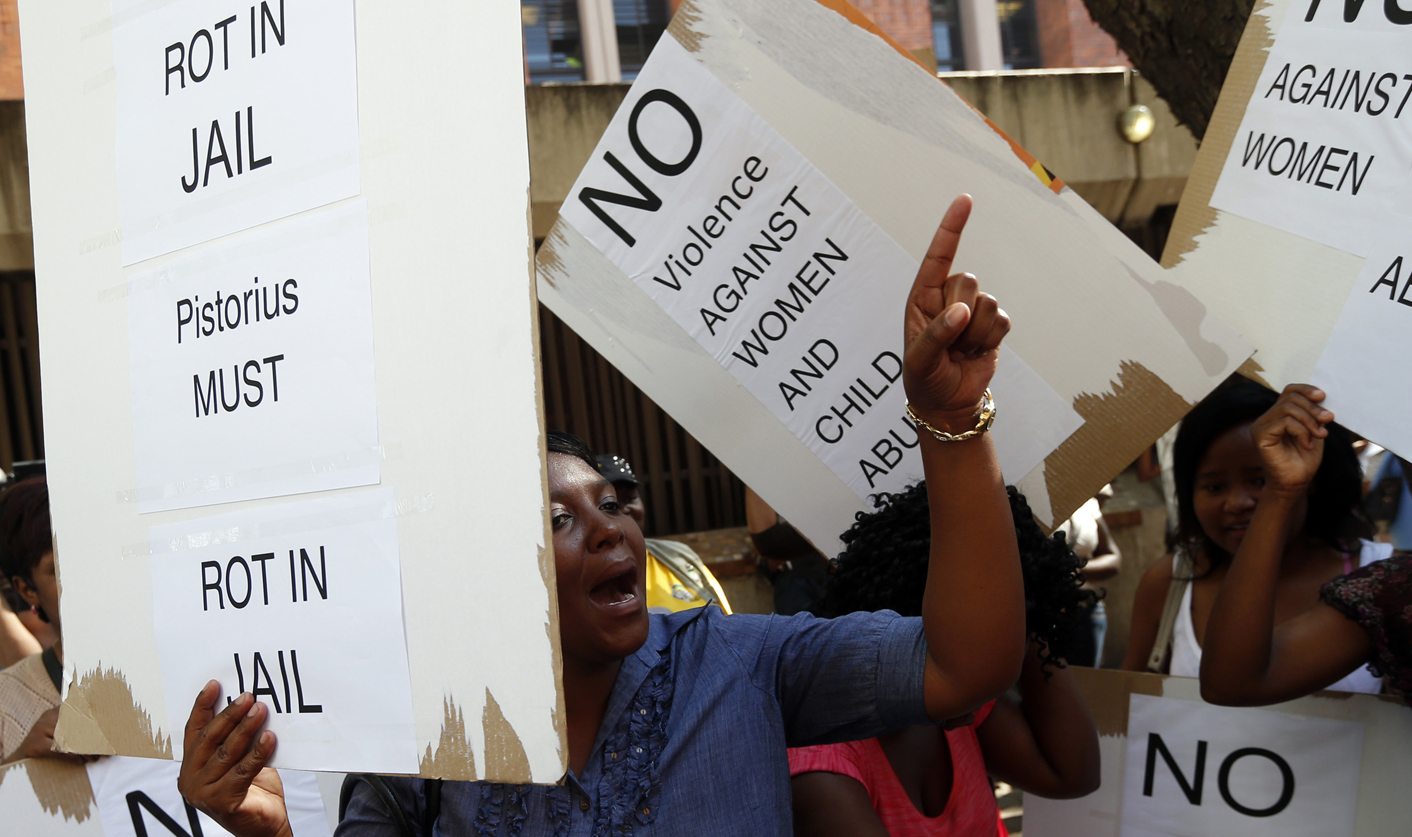 During Tuesday morning’s first session of the bail hearing of murder-accused Oscar Pistorius in Pretoria, there were few surprises for those who have been closely following the case so far in the media. No information beyond that already in the public domain was brought forward by either prosecution or defence – though there may have been some interesting exclusions, based on claims made by newspapers over the past week. By REBECCA DAVIS.

UPDATE: The Pretoria Magistrate’s Court has ruled that Paralympian murder accused Oscar Pistorius should face a premeditated murder charge. In a ruling which will impact on how Pistorius should apply for bail, Magistrate Desmond Nair said the shooting of Reeva Steenkamp was a Schedule 6 offence. Pistorius sobbed uncontrollably as the magistrate made his ruling. Pistorius’ high powered defence team argued against premeditation but Nair said he could not completely exclude “planning”.

The Pistorius case thus far has been characterised by what seems to be a number of police leaks, and a lot of very open speculation in the media. Overseas news outlets have reportedly been stunned by the freedom given to local media to publish details of the case before confirmation via the trial, but as experts like constitutional law professor Pierre de Vos and Media Monitoring’s William Bird have pointed out, South Africa has a different situation in this regard because we don’t follow a jury system. As such, there is no danger of potential juries being compromised by information in the public domain, so stringent sub judice regulations at play elsewhere are less of an issue here.

One result of this free flow of information, though, was that anyone who has been following the coverage of the matter with interest in the media would have been well-prepared for the arguments brought to bear by both prosecution and defence in Tuesday’s bail hearing. They would also have been prepared for Magistrate Desmond Nair’s commencing proceedings with harsh words to journalists and cameramen for breaching his ruling last week that no footage of Pistorius or the court could be captured while the court was in process. The picture of Pistorius crying into his hands – circulated widely around the world – came in for particular criticism.

There was a media frenzy at the court before the hearing kicked off, with less than 30 places granted for journalists inside the courtroom, despite the fact that the likes of sushi king Kenny Kunene found a home inside without trouble. Minister of Women, Children and the Disabled Lulu Xingwana was also present, and outside the courtroom members of the ANC Women’s League sang and held protest placards, one apparently expressing the hope that Pistorius would “rot in jail”.

Appearing for the state, veteran prosecutor Gerrie Nel – who secured the conviction of Jackie Selebi, among others – pulled no punches, insisting that the state would be sticking to its charge of premeditated murder for the shooting of “an unarmed and innocent woman”. Nel cited evidence which showed that Pistorius’s girlfriend Reeva Steenkamp had arrived at his house between 5 and 6pm the previous day (discounting the possibility that she had suddenly arrived to surprise him). Nel also said that there was evidence Steenkamp had brought an overnight bag and a cosmetic bag – further proof that she intended to stay over.

Nel throughout stressed that the charge of “premeditated murder” did not have to mean the act of shooting had been a long time in the planning. Pistorius, he claimed, put on his prosthetics, walked 7 metres to the bathroom, and shot into the door – in Nel’s argument, a sufficiently lengthy process to constitute prior thought.  The fact that Pistorius carried the body of Steenkamp downstairs afterwards proved nothing, he said – only that Pistorius may have felt bad afterwards. Nel argued that Pistorius was aware of the small size of the bathroom – 1,4 x 1,4m – and that to fire into that enclosed space would have had consequences. He claimed further that there was a motive both for Pistorius’s shooting and for Steenkamp having locked herself in the bathroom, but said these would be disclosed during the trial. He hinted that there had been tension in the relationship.

For Pistorius’s defence, the pugnacious Barry Roux said that the shooting was not only not premeditated murder, but not murder at all: the defence, it seems, is sticking with the story that the shooting was an accident. He gave little away of what will eventually constitute the defence’s case in trial, preferring to focus on the technical definition of ‘premeditated’, which will be a major determinant in whether Pistorius is granted bail or not. Roux cited the example of American jurists who have disagreed on the definition of the term, and said that merely picking up your gun and shooting could not constitute premeditation.

Roux said he would be presenting “case after case” where people shot their intimate partners by mistake. If it had not been an accidental shooting, Roux said, why would Pistorius have broken through the bathroom door to try to help Steenkamp afterwards? Pistorius, Roux repeated, believed Steenkamp was a burglar. And how, he wanted to know, did the state know that Pistorius had put on his prosthetics before walking to the bathroom? Did they have a witness there?

When Magistrate Nair announced the adjournment for a tea-break, he seemed to be hinting that he needed to consider carefully what the South African justice system has to say about what defines premeditated murder. The issue of premeditation will be central to the bail issue, above all other factors.

There are still many unanswered questions so far. There has, for instance, been no mention of the bloodied cricket bat City Press claimed was central to police investigation, though this may yet be forthcoming. There has also been no suggestion that Steenkamp was shot first in the bedroom, as the newspaper claimed, which seems to indicate that this detail was incorrect. We have heard nothing about steroid use, which the UK Sun claimed was being investigated as a potential motive for Pistorius – this, too, is clearly not the case, at least from the defence’s perspective.

The defence will need to do enough to instill enough doubt into Magistrate Nair’s mind about the case that he grants bail. But they haven’t yet answered a number of what seem like critical questions: where did he think Steenkamp was, for instance, if he was shooting at what he considered a burglar while she was not in his bed?

Like many other South Africans, we’ll be following closely throughout the day.  DM