Protea win: The pressure cooker kings do it again

Protea win: The pressure cooker kings do it again 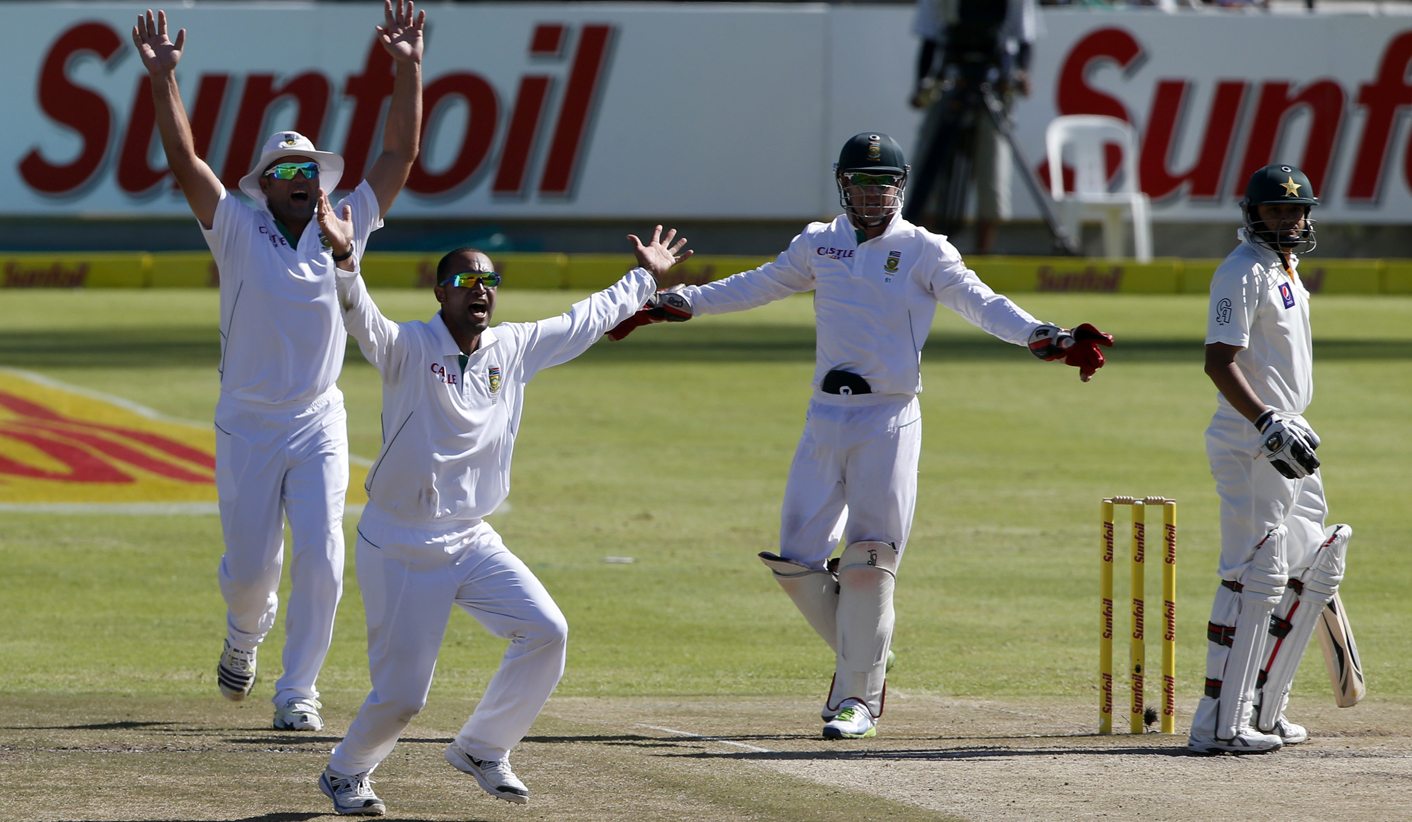 South Africa is racking up the honours in the Test cricket world. After beating Pakistan by four wickets on Sunday, they completed their sixth Test series win on the trot. Despite a hard, grafting Test, the Proteas came from behind to ensure they finished on top, where they belong. By ANT SIMS.

It’s said that escape artists never die. Let’s hope it’s true of the Proteas. After their Houdini exploits in Australia and the less tense moments against Pakistan in the second Test at Newlands, South Africa showed, once again, that they could wiggle out of anything.

They also demonstrated why they’re known as the best side in the world: when the going is tough, there’s always someone who will step up and drag the rest of the team out of the deep end.

South Africa started off the first day of the Test at Newlands in its usual, dominant fashion. After winning the toss and choosing to bowl first, Pakistan fell apart to 33-4, until Younis Khan 111 (226) and Asad Shafiq 111 (230) combined to help the visitors to a respectable total of 338 all out. Tanvir Ahmed also chipped in with 44 runs. It was a respectable total from Pakistan, especially considering that they’d been dismissed for just 49 in their first innings of their first match.

The bowlers were their usual aggressive selves, and despite Morne Morkel cramping up with an injury, Vernon Philander grabbed his usual five-for, while Dale Steyn continued with seamless perfection to support his partner in crime.

Pakistan continued to peg back the hosts and shoved them onto the back foot as they stuttered to 109-5.

The South Africans clearly needed somebody to do something.

Luckily for them, instead of just one person stepping up, two did. One whose performance was expected; the other an unlikely hero who last scored more than 35 in Tests almost a decade ago.

De Villiers wasn’t quite his usual punchy self, but he contributed a patient 61 off 113, and despite some wild sweeps against the spin, he stuck it out to help the side rebuild following Saeed Ajmal’s wizardry.

Peterson, on the contrary, didn’t lie down. Despite having an awful time with the ball in hand in the first innings, he more than made up for it with 84 off 106. He said at the end of play on day three that his teammates thought his tactics were a bit “too crazy”, admitting that he wanted to reverse sweep the spin as often as possible. He played with flair and confidence and helped South Africa rebuild to 326 all out, meaning Pakistan had a minimal lead of just 12.

“I guess I just got fed up with playing tentatively for the last month,” Peterson joked on Sunday.

“I thought I would just free myself up a little and trust my natural insticts. I have also done a lot of work behind the scenes with Gaz (Gary Kirsten), Russell (Domingo) and Robbie Walters to just free myself up mentally and go out there and express myself. They encourage me to play that way and I’m just glad it worked out in the end,” said Peterson, who earned himself a man of the match award for this performance.

That knock, crazy or not, was hailed as one of the match-changing moments by both skippers.

“Robbie was pretty inspirational, and everyone contributed on that day to get us as close to their total as possible. After that it was going to be about creating as much pressure on their batting line up as possible,” Graeme Smith said.

Pakistan held out on the third day to make it to stumps on 100-3, after Philander and Steyn yet again had a magical first few overs with the new ball – leaving the guests reeling until Younis Khan and Misbah-ul-Haq steadied the ship.

The morning of the fourth day, however, saw Pakistan lose the remainder of their wickets for 69 runs and six wickets for 22 runs. Peterson looked a different bowler as he picked up three sticks, and Philander chipped in with four and Steyn with three. It was relentless.

With Pakistan folding to 169 all out, the South African escape artists had set it up for themselves to clinch yet another series victory – their sixth in a row in just over a year.

Although it looked like they lost some momentum toward the end, a crafty knock from the effervescent Hashim Amla set up the win – still a day before play was scheduled to finish. It’s not quite a three-day finish, but it certainly was a fighting Test.

It looked like a hard-grafted Test compared to the other matches South Africa has played on home turf over the summer, and Smith said that even though all the Tests had posed their own unique challenges, it was fulfilling to win a Test in conditions that differed from the usual.

“Results-wise, those Tests we’ve played look easy, but they do take a lot of hard work and different types of discipline and mental strength, and to turn it round like we did is hugely rewarding.

South Africa will play Pakistan in the final Test starting on Friday, and another whitewash would serve them well to help build momentum and confidence before the long hibernation from Test cricket.

Can The Invincibles tag be bestowed upon them yet? Probably not quite, but they certainly are on the right track.

Pakistan 1st innings 338 all out

South Africa 1st innings 326  all out

Pakistan 2nd innings 169 all out