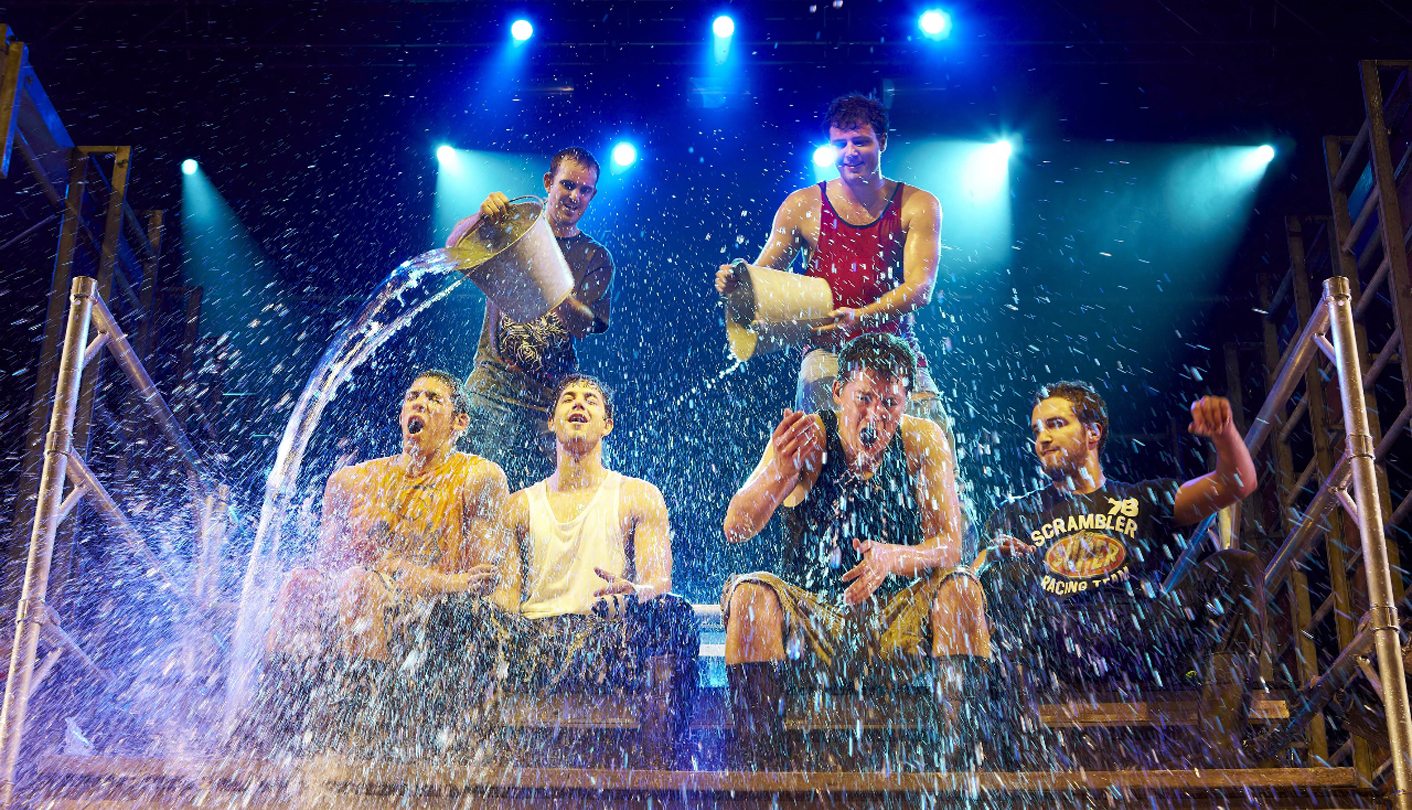 The dancers of Tap Dogs combine some pretty fancy footwork with an industrial, edgy setting to bring you one of the most energetic dance shows of their generation. Top dogs they certainly are, too. By LESLEY STONES.

The dancers in Tap Dogs must have one of the most enjoyable jobs in showbiz for any guy. They dance in the most macho way, full of testosterone and bravado, travel the world, slob about in mismatched street-cred clothes, clearly have enormous fun, and get cheered by delighted females every evening.

Schoolboys everywhere must be growing up saying: “I want to be a pilot. Or a Tap Dog.”

But it’s not just wonderful for them, it’s fabulous for the audience too, as six incredibly good tap dancers present some superb routines. This isn’t the genteel tap of Fred Astaire; it’s bold, brash and thoroughly Australian, if you can say that without it sounding like an insult. And boy, it’s loud, with the taps amplified to reverberate around the theatre and through your ribcage.

Tap Dogs last came to South Africa in 2009 and it was a pleasure to see it again, especially since choreographer Dein Perry has revamped the show with new routines.

They stomp across the stage, up ladders, over metal slats and down sloping bits of steel, all created on the fly by the flexible structure of the stage set. Often the taps are the only sounds, apart from some “yeahs” or whoops when the Dogs do a particularly flashy stunt.

The taps create a rhythmic industrial music in this pounding, pulsating show. Sometimes there’s a recorded soundtrack; then the show’s latest addition, female drummers Cat Hunter and Catarina Percinio, add a new musical touch and give the men in the audience something to look at too. Though really it’s a thoroughly unisex show. My escort was initially dubious that 80 minutes of tap would hold his interest, but the entire audience is quickly captivated as the Dogs make dancing addictive. The pace varies nicely with solo slots, ensembles and props like ropes and baseballs adding an extra dimension.

It’s very clever and often very funny in the moves and interactions between the team. There’s a lovely scene where they dance in water, sploshing around with an infectious glee that ripples across the audience. As does the water that they kick out from the stage.

The lighting effects are excellent too, with a scene of tapping by torchlight and a highly inventive part where they dance beneath the glittering sparks from angle grinders. You don’t want to look away for a moment in case you miss something funny or spectacular.

Part of the delight of Tap Dogs is that it’s extremely slick, while still managing to look funkily rough and ready. DM

*Tap Dogs runs at Montecasino’s Teatro until March 10, then moves to Cape Town’s Artscape from March 13-24.