Chronicles of Chic: Remains of the rainbow day 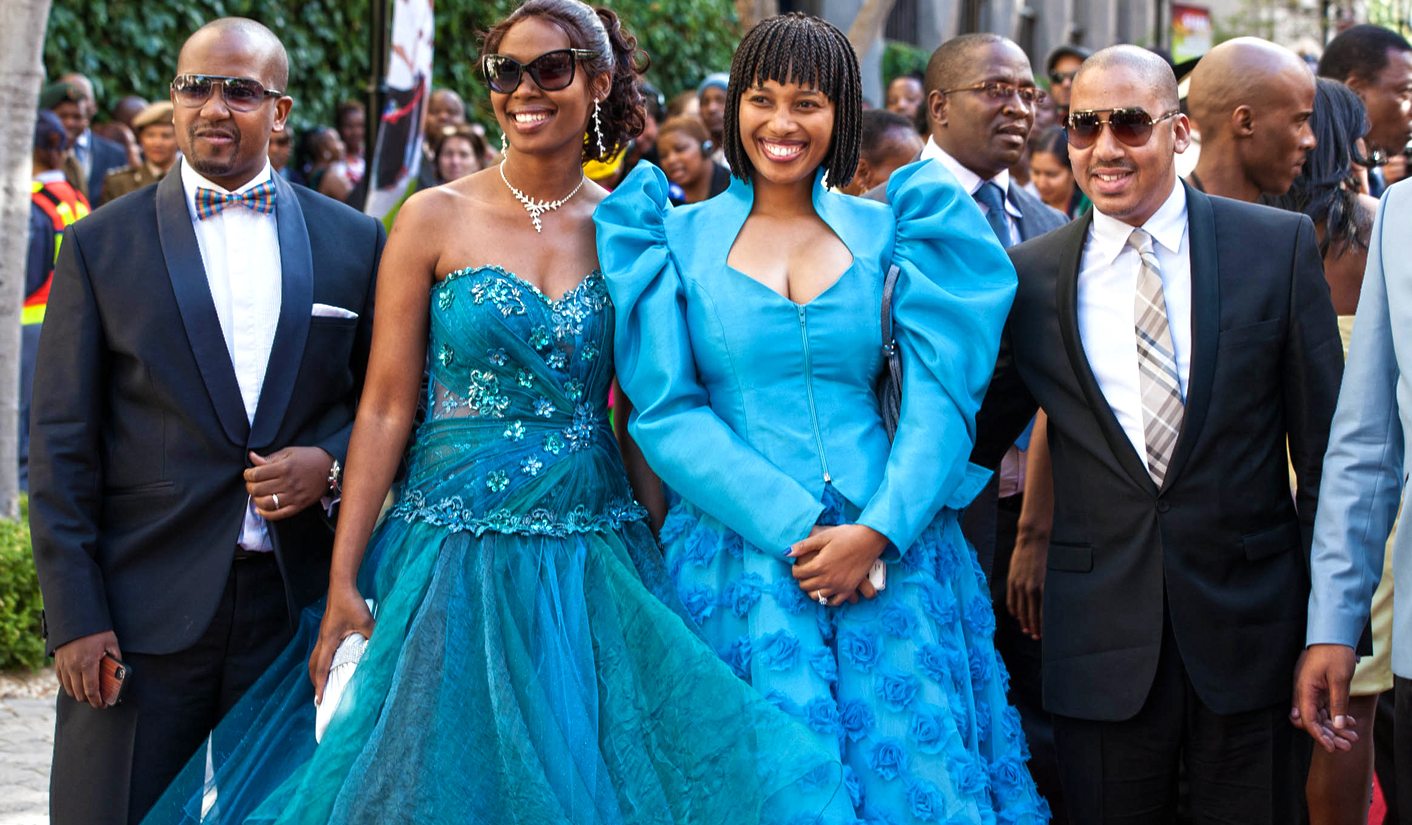 The SONA red carpet is not your usual fashion event, although one may see Chanel bags, model-look-alikes, local celebrities and fashion flops. Still, the rainbow nation every year manages to produce a line up of politicians in suits and evening gowns, weird hats and exuberant feathers. By EMILIE GAMBADE. Photos by GREG NICOLSON.

Fashion events usually set trends; in 1998, Sharon Stone combined a lavender skirt from Vera Wang with a white men’s shirt, rocking the Academy Awards and giving birth to a long series of casual-meets-formal outfits. The 2013 Golden Globes signalled the comeback of fishtails, although they never really left the red carpet, and Barack Obama’s Inauguration Ceremony was all about the coat-dress, the purple colour as worn by Sasha and Malia and, of course, bangs.

SONA, uhm, doesn’t. The red carpet is rolled out to welcome the feet of MPs, MECs, the political and business elite of South Africa and yes, they do dress for the occasion. But calling it a fashion event would be more than slightly exaggerated; not with the heavy dresses, ruffles, feathers, and frocks that look like they were made for drags rather than leaders.

This reporter spotted a turquoise duo that was quite symbolic of the Dynasty look (headline photo), en vogue in the eighties: the combo corset-dress in tulle with intricate flowers, jacket with puffed sleeves on steroids, cut-out Victorian collar and A-line skirt with, again, flowers, is everything but… fashionable.

Sizakele MaKhumalo Zuma chose baby pink for the occasion, but neither the colour nor the fabric nor the confused movement of the dress did her any good; the veil on her hair seemed an embarrassment, not something to punctuate her outfit.

There were also the usual traditional outfits that seem to be recurrent at the SONA. Two ladies stood out: Rachel Tambo, who went for pink and black, quite appropriate on this rather subdued Valentine’s day, marred by the murder of Reeva Steenkamp by Oscar Pistorius. The lady in orange and black is a symbol of South African contradictions or how to clash African and Western together; Karl Lagerfeld might have rolled in his bed. Mandla Mandela’s headpiece was beautiful, in turquoise and light pink, a colour that seemed to be très SONA 2013.

And then there were small gems: understatements, vintage outfits, like Jackson Mthembu’s, who told us that he couldn’t remember where he got it, as it was “an old suit, bought about five years ago or so,” picks of the night made by women in rural areas, colourful clothes that told stories of love for local craftsmanship and South African design.

DA’s Parliamentary Leader Lindiwe Mazibuko was all in black, looking sophisticated in a cropped top from Stefania Morland and a skirt by Thula Sindi. DA Leader Helen Zille was in an aquamarine dress from Johann Smith, with turquoise earrings. One faux-pas: the blue clutch bag in ostrich feather Zille chose to complete the outfit. Responding to a tweet from Ranjeni Munusamy, who asked about the “blue poodle to match the dress,” Zille joked: “Yes, it’s my poodle, I dyed it this morning and put it across my arm…” In fact, she was trying to show support to the ostrich industry, as it “is going through a terrible time with the avian flu.” Though from a fashion perspective, good feelings may be better left at home.

Singer Chomee, often present at ANC rallies, was pretty in a green dress with touches of leopard print and a belt just under the chest; she bought it in a small Johannesburg boutique a few years ago, but had never worn it before.

Pemmy Majodina, Eastern Cape MEC for Social Development, was wearing her advocacy for social development on her sleeves with an outfit specially made by women from rural areas.

It suited her tall stature and if it wasn’t on trend, it was a stylish show of support for the local fashion industry and the seamstresses working behind the scene. Precious Motsepe was loyal to David Tlale, one of the African Fashion International stable designers, in a dress with a plunging V-back in shades of gold.

Gugu Mtshali was impeccable in a chocolate taffetas dress with a cropped shirt belted at the waist and a gold Grecian-style laurels hairband that defined the grace of her face. It was delicate without being misplaced.

DA Spokesman on Finance, Tim Harris, was elegant in a suit from Fabiani and his wife, Cara Williams, looked slightly too casual in her coral dress.

The standout of the night was ANC Youth League MEC Member, Magdalene Moonsamy, dressed in a chocolate dress with white polka dots, ¾ sleeves, exaggerated collar and cuffs, puffed shoulders and belted at the waist, a white clutch under the arm and a turban around her head. It was a retro look, something that could have been designed by Marc Jacobs for Louis Vuitton’s Yayoi Kusama collection, tucked in the fifties; feminine, daring and refreshing to see, cleavage safely out of the way.

The SONA 2013 red carpet was not as extravagant as last year; there was slightly less to celebrate, less to brag about, less to dress up for. Although the outfits shown at the event might not always be of good taste, let’s hope all the colours won’t soon be gone. DM