Out of the Closet: Lindiwe Mazibuko 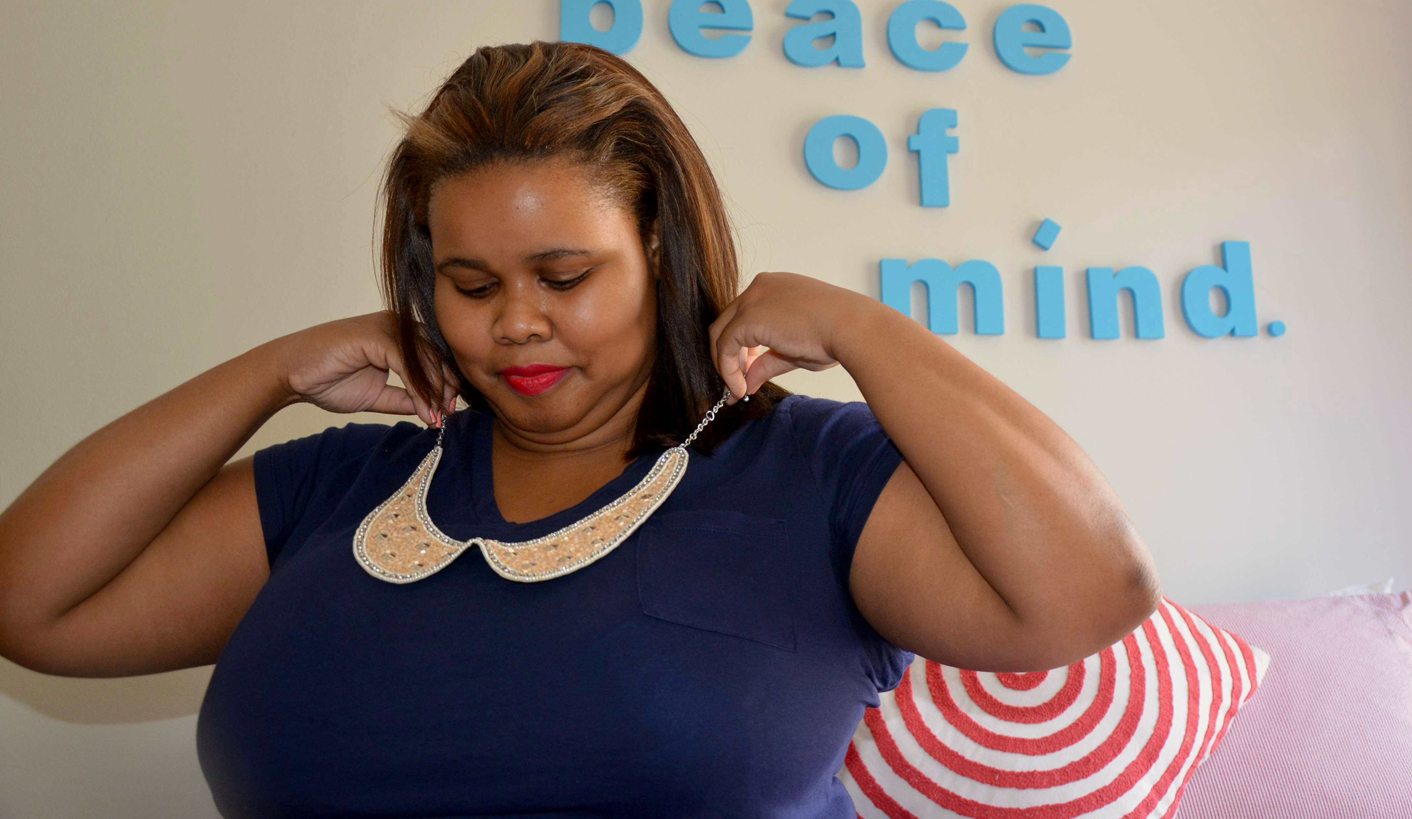 Lindiwe Mazibuko has a lot to carry on her shoulders: at only 32, she is the youngest black woman leader in the Democratic Alliance, the fourth youngest Parliamentarian, a strong voice of the opposition, an active politician and a woman who is frequently attacked for 'lacking authenticity' or for being ‘just a kid’. She opens her closet to Daily Maverick’s EMILIE GAMBADE, revealing her considerable style and panache.

“I am 32 years old and it is very unusual to have a 32 year-old female politician in leadership in politics; people are already thrown by that. There is no point in trying to pretend that I am someone else and use camouflage to hide that aspect of [myself] that I should be celebrating; it should be what makes my offer or what it is that I have to say more compelling.”

Lindiwe Mazibuko’s political statement is everything but a concealed one. The young Parliamentary Leader has a lot to offer: she is the first black leader of the DA in Parliament; an intelligent, articulate and rather thick-skinned woman.

In past, she has been condemned by her detractors for shying away from the race issue, and called a “coconut” by Blade Nzimande for not being “black enough”. Shadow Deputy Minister of Home Affairs, Masizole Mnqasela, blamed her for not having the right resonance with the black population of South Africa while Jackson Mthembu labelled her “naïve” and told her to “get a life”. Then Deputy Minister of Public Works, Jeremy Cronin, gave a speech in Parliament in which he unpacked the reasons why she wears her hair the way she does, as if it mattered, politically speaking.

The least one can say is that she gets people talking.

Photo: On the balcony of her Cape Town flat, wearing a blue T-shirt and assorted pleated skirt, both from Country Road and purple jacket from Habits. (Kate Stegeman)

Despite the aggressive criticisms and the gibes, she doesn’t bend. Rather, she takes her role seriously, sleeves rolled up, eloquence sharpened.

When it comes to power dressing, wearing clothes that back up her political responsibilities and add to her respectability, Mazibuko’s choices are bold and beautiful; she dresses the way she marches through politics, doubts and hesitations draped in a colourful poise. Perhaps the best, albeit harsh, way to describe it is that her wardrobe is an elegant ‘screw you’ to the usual display of black, green, yellow and to the common argument that her Africanness is disputable.

Lindiwe Mazibuko is an African; born in Swaziland, she speaks isiZulu and French, grew up in the black township of Umlazi in KZN, attended a Catholic boarding school and holds a BA in French, Classics, Media & Writing and a BA Honours in Political Communication from the University of Cape Town. She was only twelve years old when she discovered London’s Oxford Street, one of the busiest shopping streets in Europe, and from her walk down luxury lane, she remembers, “I thought, ‘This is everything I have been raised for, this is where I belong.’” Time has proven her wrong: she moved up into the political ring and Selfridges may relax; she didn’t lose her hunger for great style.

Photo: On the floor of her apartment; on her lap, pink cropped-jacket with black parrots from Monsoon; around her from the left, black and white baroque skirt with lace from Primark, tulle dress from Kluk CGDT, cropped top in black mesh from Stefania Morland, red jacket from Woolworths. (Kate Stegeman)

Her wardrobe represents her rather rich personality, a modern mix of influences rooted in her South African upbringing. She is, after all, a 21st Century African, cosmopolitan and experimental woman, much more than a standard-bearer for one type of proudly South African blackness.

She doesn’t wear “twinsets and heels, (but) things that are comfortable and flattering, and colours that pop.” Her closet is a feminine trove: a baroque skirt with embossed flowers from Primark, a cropped-jacket in baby pink and printed black parrots from Monsoon, a clutch on appro from local designer Missibaba, (the brand lent it to her for a period of time) a pair of glittery gold heels, pieces from Zara, Trenery, Kluk CGDT or Stefania Morland.

On the day of the interview, she is dressed head-to-toe in navy blue, T-Shirt, pleated skirt and plastic sandals from Country Road, a textbook sample of colour blocking. Is she symbolic of our local youth? Maybe not. The South African youth is still seeking its identity; it even once had a Malema’s Prada-Breitling combo as a role model.

But for many the devil wears DA palatinate blue, and when Mazibuko weaved a fringe to her hair last year, her authenticity was suddenly questioned. “I never hid the fact that I was weaving my hair; I’m not one of those women who claim: ‘I’m a Mother of Africa, I must wear my hair natural’; I don’t think my hair is a political statement. I think hair is something you must have fun with.”

Her hair did become a subject of a political skirmish, when IFP’s Koos van der Merwe disturbed her speech to ask “on a point of order”: “Before the member continues, could she just explain to the House what she has done to her hair?” Mazibuko thought it was quite inappropriate, that there was a place and time for such comment and it was definitely out of the parliamentarian arena: “I also thought it was sexist; Mr van der Merwe thought he was lightening the mood, he didn’t actually realise he was doing something disruptive. He thought it would be fun to make a joke about my hair in a middle of a speech. There was very much this kind of patriarchal sense that I wouldn’t mind because I’m just a kid; it was incredibly disrespectful.” She brushed the remark off replying that she would gladly share the “secrets of her hairdo with him should he have any hair.” Mazibuko 1, van der Merwe 0.

Her razor-sharpness doesn’t mean she has no doubts or bottomless confidence. For style advice and inspiration, she turns to her “fashion friend,” freelance fashion consultant and blogger, Robyn Cooke. “It’s like having a therapist, she’s got a very good way of encouraging me not to go overboard, also not to go underboard, to find the middle ground… (Even if) there is no middle ground; I just get to be myself. She’s there to tweak my instincts a little bit.”

For the State of the Nation Address, Mazibuko is going to wear black “with some magic to it,” an outfit she describes as “fun but in a demure way.” She chose a silk skirt from Thula Sindi, with a wide waist sitting all the way down her rib cage, and a bow at the back; on top, a cropped jacket in black mesh, embellished with flowers and subtle beads, worn over a corset. The competition is usually fierce on the red carpet, as MPs model their special attires, and the 2012 line-up was, if anything, carnivalesque. Looking at last year’s outfits, polychromatic was the new black and elegance was definitely yesterday.

Photo: Converse takkies in DA blue and glitter gold heels she will wear for the State of the Nation Address (Kate Stegeman)

“We live politics every single day; but people receive us only in small snatches; all they see is pictures of us in the paper and what you see on this picture, what you wear, says a whole lot about who you are. In that sense, the way politicians dress is hugely influential and shows part of who they are and what their personality is. If you use it well and if you are genuine about it, it can be a way of showing your inner landscape to people without having to talk to them.”

Her outfits tell stories of colours, experiments and a soft, distinctly feminine confidence; they also speak about a woman who embraces the world’s many influences while fighting fiercely for her very own. DM