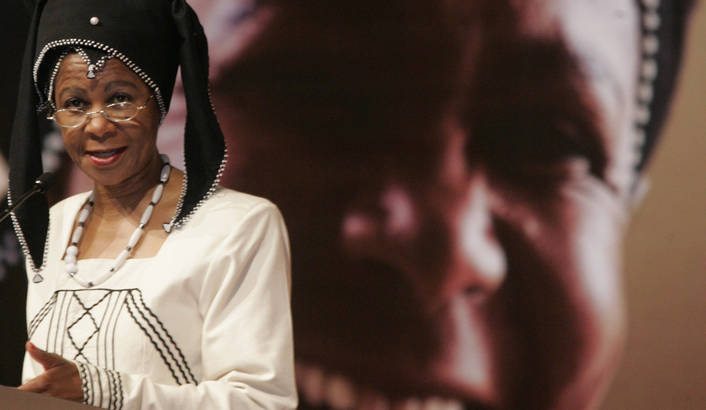 Mamphela Ramphele has resigned as chairwoman of Gold Fields amid speculation she is about to launch a political party to challenge the ruling African National Congress (ANC). Gold Fields, one of South Africa’s biggest mining companies, said Ramphele had decided to retire “to further her socio-economic and political work”. Her decision was “long overdue”, said the National Union of Mineworkers (NUM). “The mining sector requires people with a very strong character to be able to transform, rather than a mere opinion-maker who shouts from the sidelines with no concomitant action,” the NUM said in a statement. Ramphele, a former managing director of the World Bank and vice chancellor of the University of Cape Town, is a fierce critic of the ANC-led government, saying it has allowed cronyism to undermine the ideals of the struggle against apartheid.

Anonymous allegations against public protector Thuli Madonsela should be dealt with and laid to rest, the Democratic Alliance says. Justice and constitutional development spokeswoman, Debbie Schafer, said she supported the justice portfolio committee’s call for the public protector to address those allegations in parliament. Justice and constitutional development committee chairman, Lewellyn Landers, told the SABC Madonsela’s appearance was not an attempt to neutralise her office. He said her office was a “shining light” and a “centre of excellence” but said she had been investigating complaints in the judicial systems, which are beyond her mandate

Earthlife, groundWork and Greenpeace have withdrawn from Eskom’s NGO forum. The NGOs have accused the energy utility of spying on them through Swartberg Intelligence Support Services. “Eskom has demonstrated that it is a completely unscrupulous organisation both in terms of its energy choices and ethical standards,” said Michael O’Brien Onyeka, Greenpeace Africa’s executive director. The civil society groups, which received documents exposing correspondence between Eskom and Swartberg, have demanded an apology from Eskom and an independent investigation into the matter. They also want the National Energy Regulator of SA and the Public Protector to launch their own investigations into Eskom’s espionage. Eskom spokeswoman Hilary Joffe said the company had terminated its contract with Swartberg Intelligence Support.

Police believe three people were responsible for the attack on the CEO of Chrysler South Africa, Trent Barcroft, and his wife Cathy. Gauteng police spokesman Kym Cloete told Sapa the couple were attacked in Midrand on Saturday afternoon. Barcroft was shot in the stomach, and is still in intensive care at the Sunninghill Hospital. His wife, Cathy, was unharmed. The attackers took jewellery, two cellphones, and a handbag, Cloete said, adding that investigations into the case were continuing. Chrysler SA spokesman, Richard Sloman, said earlier that Barcroft’s wife was still in shock and that Barcroft was expected to make a full recovery.  US embassy spokesperson Jack Hilmer said they were aware of the shooting. They were, however, not authorised to comment, because Trent is a private citizen.

Thirteen people involved in poaching have been arrested in the past week by specialised anti-poaching units supported by the Hawks and the South African National Defence Force. Nine poachers were arrested in the Kruger National Park, one in Limpopo and three couriers were taken into custody. A further four poachers were shot dead in the KNP. The department of environmental affairs reports the number of rhino poached since 1 January has risen to 96 with 66 being killed in the Kruger National Park, 11 in North West and 10 in KwaZulu-Natal. A total of 34 poachers have been arrested in the past month.

The Limpopo education department has accused Section 27 of “grandstanding” after it reported on the “shocking” infrastructure of the Jali Secondary School. The NGO said poor infrastructure at the school had resulted in textbooks and stationery being damaged by recent rains and pupils missing lessons. A nearby bridge had been washed away, preventing pupils and teachers from reaching the school. Department spokesman Pat Kgomo said it was “unfortunate that Section27 decided to grandstand and declare themselves champions of service delivery in our schools”. He said the public works department has been asked to refurbish five classrooms and the Council for Scientific and Industrial Research to built extra lavatories.

The Western Cape government believes it is “well on track” in its plan to provide broadband access to all citizens in the metro by 2020. The Cape Argus said Jo-Ann Johnston, the woman in charge of the province’s broadband strategy, had reported that “giant strides” had been made since Premier Helen Zille announced an extensive broadband rollout last year. Zille said that by 2014, 70% of government facilities and every school in the province would be linked to a broadband network.  There would be at least one public information and communications technology access facility in every ward and that the “largest mesh network in the world” would be created to connect households in Khayelitsha, Mitchells Plain and Saldanha Bay. The projected cost of the pilot project is R32-million.

The situation in the Democratic Republic of Congo was the subject of an extraordinary Southern African Development Community (SADC) summit held in Maputo on Friday. International relations and co-operation deputy minister, Ebrahim Ebrahim, that South Africa was opposed to any move to overthrow a government through military means, referring to the 19 people arrested in Limpopo on suspicion of plotting to overthrow the DRC government. SADC is awaiting a mandate from the United Nations Security Council to deploy forces in the troubled eastern region, which is facing a worsening security and humanitarian crisis as the M23 rebel group tries to overthrow the government.