In Bredasdorp, a community searching for its soul 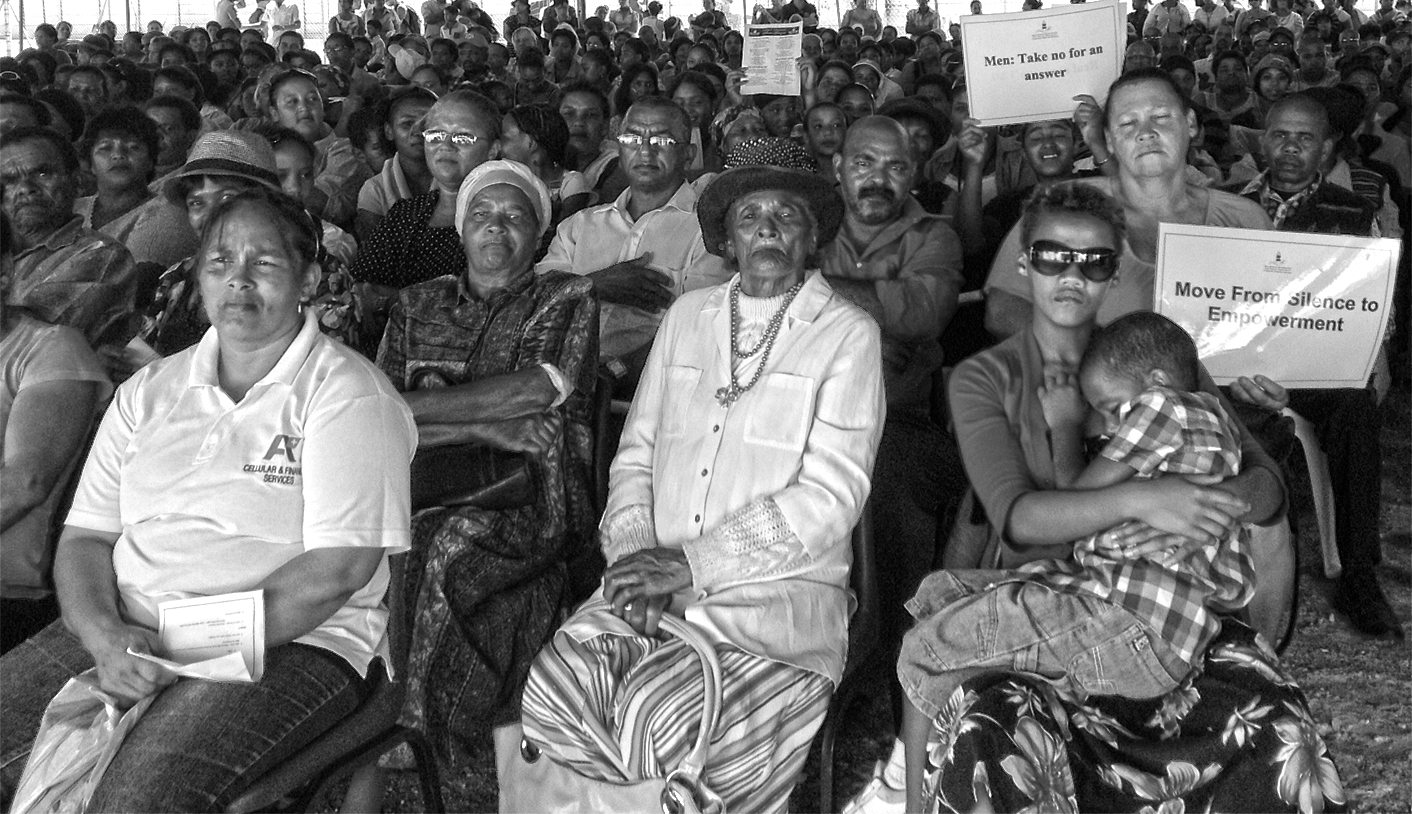 It’s been a dark weekend in Bredasdorp, where the battered body of Anene Booysen was laid to rest on Saturday. As locals struggle to come to terms with the gruesome crime which thrust their quiet town into the global spotlight, difficult questions are being asked. Sunday saw community members gather again to express outrage, and to hear messages of support from politicians – some of whom just couldn’t resist the opportunity to play political games. By REBECCA DAVIS.

Bredasdorp is most often described as “sleepy”. It’s accurate. Around two-and-a-half hours’ drive from Cape Town, the town boasts of being South Africa’s first “dorp”, established in 1838. Today it has a population of about 15,000, the vast majority of whom are Afrikaans-speaking coloured people. Tourism websites will inform you that wheat, wool and wild flowers remain its major industries. Anene Booysen, dead at 17, did not work with wheat, wool or wild flowers. She was a cleaner with Asla Construction.

The Asla Group is an expert in the field of building “community-driven subsidy housing”. They have built 35,000 of these houses since 1995. It was to an Asla construction site that De Doorns worker Letsekang Thokoane was allegedly chased by police in January, before succumbing to his rubber bullet injuries in Tygerberg Hospital. It is also claimed that an Asla construction site was where a security guard found Anene Booysen, two Fridays ago, pleading “Here, help tog net” (Lord, please just help me).

On Sunday, a small heap of flowers marked the spot where Booysen had been left to die by her murderers. The RDP houses which the security guard had been employed to watch over are newly-built and freshly painted in blues and purples. There are many of such houses in Kleinbegin, where Booysen lived. She and her foster mother Corlia Olivier had lived in just such an RDP house for the last few months. Booysen liked to keep her room very tidy.

Bredasdorp is not the prettiest of the Overberg towns, but it has a certain placid charm. In the centre of town on a Sunday afternoon, all was deserted. The town’s premier tourist attraction, a Shipwreck Museum, was locked up, as was the imposing heart of Bredasdorp: its Dutch Reformed Church. On the Tourist Information office’s noticeboard, the list of ‘Upcoming Events’ suggested that Bredasdorp entertainment revolves around the church, schools, and sporting events. This Thursday, locals can choose between a Valentine’s Day Fun Run and the Watermelon Festival at Bredasdorp Primary School.

Locals say the dearth of activities for their youth leads them towards taverns and drug use. Speaking at a memorial service for Booysen at the Nelson Mandela hall in Kleinbegin on Sunday, an ANC Youth League representative for the Overberg received huge cheers when he demanded that municipalities set up recreation centres for young people. It is widely believed in the community that the rape and murder of Booysen was drug-fuelled, though no evidence has been brought to light to confirm this yet. A member of a community police forum told Rapport: “Moenie wonder waarom die moorde so wreed is nie. Dis wat dwelms aan jou doen” (No need to wonder why the murder was so cruel. That’s what drugs do to you).

Specifically, community members suspect that tik (methamphetamine) played a role in the grisly crime. Tik use is associated with aggressive and violent behaviour, and is considered a growing problem in the Western Cape, where it is estimated that about 200,000 people – predominantly young males – use tik. The most recent national crime statistics, released last April, showed that drug-related crime had risen 15,6% country-wide. Bredasdorp-specific crime statistics indicate that drug-related crime has almost doubled between March 2009 and March 2012, rising from 96 incidents to 181. However, this figure is lower than it has been at previous points over the last decade: between March 2003 and March 2004 there were 191 incidents, for instance.

It’s not hard to understand why Bredasdorp locals would be pointing at drugs as a way of making sense of the incredible ferocity of this seemingly motiveless crime. For one, it provides a way of outsourcing responsibility: our sons could not possibly do this unless they were under the influence of a powerful drug addling their behaviour. ANC MEC member Lynne Brown, speaking at Sunday’s memorial, warned against this kind of reasoning more generally. The three men currently under suspicion of having killed Booysen, she said, were born and bred in the local community. “The boys who have been arrested – they’re not anyone else’s child,” Brown said. “They’re your and my child. Dis ons kinders” (It’s our children).

Brown expressed what was clearly a widespread bemusement about why Bredasdorp should have played host to the murder. “When I was 12, I would come here on holiday because it was safer than Cape Town,” she said. The Commission of Gender Equality’s Amanda Gouws also spoke of spending time in Bredasdorp as a teenager, and finding it a safe haven. One after another, speakers took the lectern and expressed the same kind of horror and confusion: How could this happen? Where does this come from? What can we do to prevent it ever occurring again?

Cosatu, in the form of Tony Ehrenreich, called for a governmental commission of inquiry. Eve Marthinus, Speaker in the Cape Agulhas municipality, pledged that a Safe House being built in Bredasdorp would carry the name of Anene Booysen. Lynne Brown appealed to parents to set examples for their children, challenging the audience: “If I asked all men to stand up whose kids have never seen them slap their wife…” Amanda Gouws pledged to personally monitor the upcoming court case of the three accused to see that justice would be done. ANC Western Cape leader Marius Fransman called for a day of mourning, for greater male involvement in the fight against rape, and for the Western Cape government to “re-budget immediately” to ensure that women’s NGOs like Rape Crisis were kept well-resourced.

If anyone had fears that Booysen’s death would become yet another political football, however, they appear to be well-grounded. Bredasdorp falls within the Cape Agulhas Municipality, with the municipal council currently controlled by the ANC by one seat (an independent who formed a coalition with the ANC). On Sunday, Fransman was very much star of the show, granted the “keynote” speech at the memorial service. Fransman’s address emphasised the structural deprivations which led to the vulnerability of a life like Booysen’s, including the legacy of the dop system and the Apartheid-era introduction of guns and drugs to the Cape Flats.

But he also railed against Western Cape MEC for Social Development Albert Fritz, who was reported as saying in the wake of Booysen’s murder: “We want to call on our young men and women to please ensure they don’t get into situations at 3am in the morning, where they place themselves in danger. We don’t mean to say to people they can’t walk around at 3am, but these are very different and difficult times. Please ensure that you are safe and go with people you can trust, who won’t hurt you.” Some NGOs have had sharp criticism for Fritz on this score, saying that he is essentially blaming the victim for being out at 3am.

Others cut him more slack – Rape Crisis director Kathleen Dey was quoted as saying: “He’s echoing the national anxiety of every parent we know. The streets are not safe.”

But Fransman was in no mood to be charitable, saying Fritz was missing a vital point: “Dit was iemand wat sy geken het,” (it was someone that she knew – a reference to the fact that one of the accused is allegedly a childhood friend and ex-boyfriend of Booysen’s). From Fritz, Fransman went on to give Community Safety MEC Dan Plato and Helen Zille tongue-lashings of their own. This culminated in the DA’s Lincoln de Bruyn – Overberg District Municipality Mayor, who had previously delivered a short, low-key speech – very publicly walking out of the hall. This factional bickering seemed tawdry and inappropriate at a memorial service where many emphasised the need for cohesion and cooperation to tackle the country’s scourge of sexual violence.

Booysen’s foster mother Corlia Olivier sat in the front row with other family members, looking somewhat shell-shocked but grimly composed. She could scarcely have imagined that within a week, images of her and her foster daughter’s grainy ID photo would be beamed all over the world. A community member told the audience at Booysen’s funeral on Saturday: “Anene wanted attention in her lifetime, but not like this. Not in this manner.”

On Monday, two of the young men accused of Booysen’s rape and murder will appear in the Bredasdorp Magistrate’s Court for the first time. A community shaken to its core will be watching them, desperate for answers. In the grounds of the ‘Meulhuis’, adjoining Bredasdorp’s church, a sign stands. “Wie vandag se kinders vergeet, het more se jong mense en oormore se volwassenes reeds verloor”, it reads:  Whoever forgets today’s children has already lost tomorrow’s youth and the future’s adults. DM

Photo: Around 1,000 Bredasdorp locals packed out a hall and a neighbouring tent to hear Anene Booysen’s memorial service on Sunday. (Jeanine Cameron)

James Stent for GroundUp • 34 mins ago

Steve Keating for Reuters • 3 hours ago