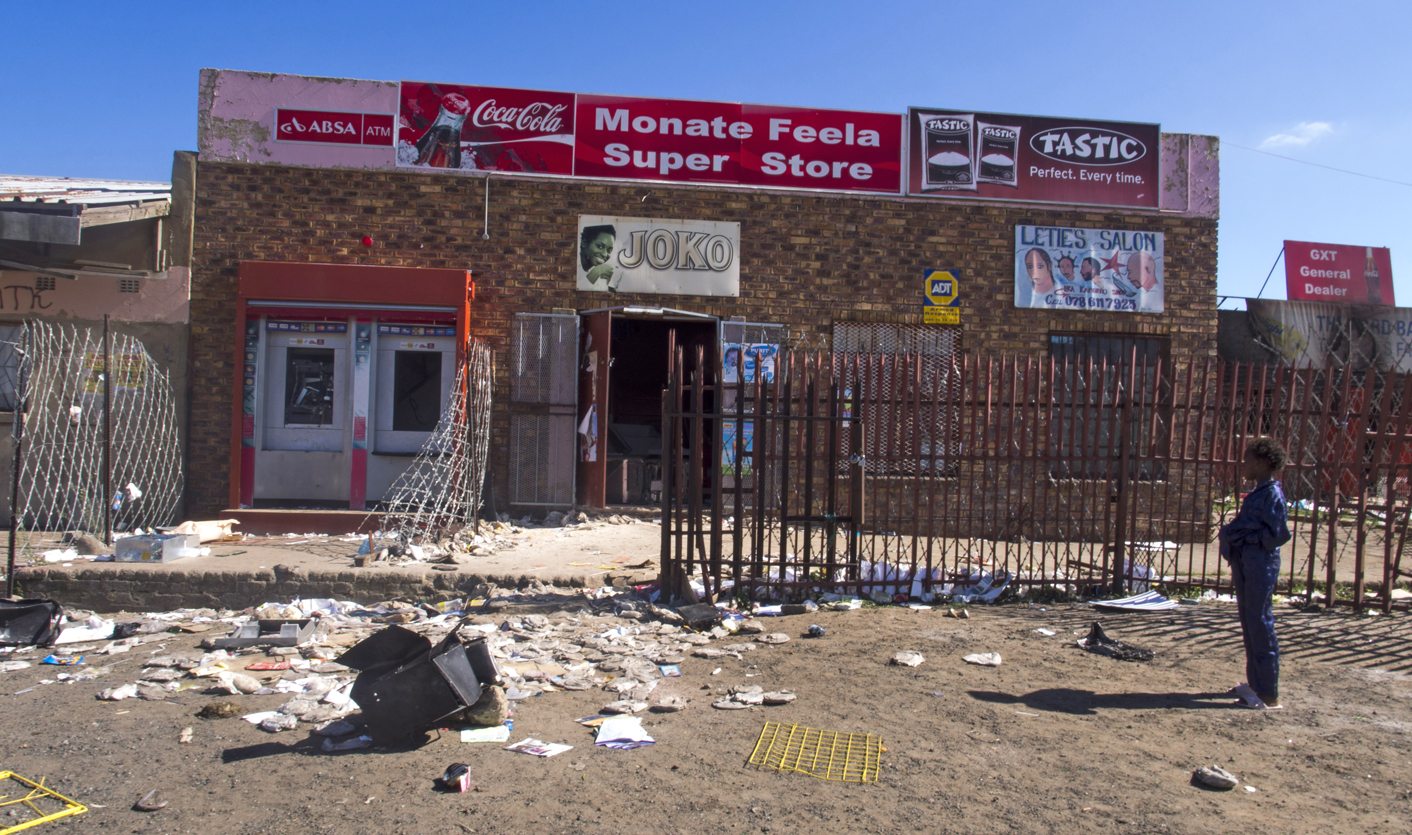 Metsimaholo local municipality, Sasolburg town, Zamdela location has been ground zero of the worst local government protests so far this year. Behind the violence and looting in the headlines, what failings of local and provincial government have contributed to the people’s anger? The picture being painted is that of an administration barely paying lip service to public and community participation. By PAUL BERKOWITZ.

Last Wednesday the Municipal Demarcation Board (MDB) and the Metsimaholo Concerned Residents (MCR) released a joint statement on the proposed amalgamation of the two Free State municipalities (Metsimaholo and Ngwathe local municipalities) that border Gauteng.

The process of boundary demarcations is straightforward in theory but this particular proposal has become synonymous with community anger, protests, violence and a crescendo of accusations against the Free State premier, Ace Magashule. There are a number of interconnected issues: the way protestor violence and looting has obscured legitimate opposition to the proposal; the structural violence of an unresponsive, non-delivering government; and the low regard that most parties have for the law and due process.

Obviously, all criminal acts committed during the last two weeks should be deplored. The violence of a few (or even most) of the protestors does not, however, invalidate the concerns or the rights of the people in the two municipalities affected by the proposed merger.

What can, and should, be addressed is whether the proposed merger, and the way it’s been (mis)managed by municipal and provincial officials in the Free State, is indicative of a larger pattern in the province and indeed the rest of the country. The evidence available isn’t flattering at all. It has become clear that the political machinery failed to adequately communicate with the affected citizens. The demarcation process is recurring and predictable. There’s a five-year cycle that must be concluded in time for the two major electoral events in South Africa: the national/provincial election followed by the municipal elections two years later. The current process must be completed in good time before the 2014 and 2016 elections.

Any proposed change of municipal boundaries or status (e.g. the ‘upgrade’ of Mangaung from a local municipality to a metro) is subject to a consultation process that should involve the MDB, the provincial MEC of co-operative governance (and traditional affairs and human settlements), municipal officials, ward committees, community organisations, and citizens. The process is not, and cannot be, infinite but there are some minimum standards expected from the MDB and the government.

The violence of a few (or even most) of the protestors does not, however, invalidate the concerns or the rights of the people in the two municipalities affected by the proposed merger.

What can, and should, be addressed is whether the proposed merger, and the way it’s been (mis)managed by municipal and provincial officials in the Free State, is indicative of a larger pattern in the province and indeed the rest of the country. The evidence available isn’t flattering at all.

For the MDB’s part, it claims in Wednesday’s release to have discharged its responsibilities. It has communicated on its website that it and the Department of Co-operative Governance and Traditional Affairs are working together to ensure the rest of the demarcation process is as smooth and violence-free as possible.

The joint release appears to be a bit of a touch-up job: only two days before the press was reporting on the MDB asking the minister not to usurp its mandate. Government’s involvement in Zamdela has been a bit confused and ad-hoc from the municipal level up to the national level.

At the municipal level there is enough evidence of insufficient community consultation around the proposed merger. The Daily Maverick has interviewed members of the MCR who state emphatically that the consultation process was inadequate. There is also an earlier article that hints at a few dubious practices.

Firstly, the consultation process was scheduled at a difficult time of the year. It’s not impossible for the affected community and council to have communicated in mid-December, but it’s unlikely given the circumstantial evidence.

Secondly, the Metsimaholo speaker is quoted as saying, “We are supposed to answer on the matter before next week Monday and we are aware that time has run out, but we still have to tell our people through billboards so they can send their objections before January 26. We are confident that our people will like this proposal.”

This statement is bizarre and troubling. The speaker admits that the council hasn’t done everything by the book. He confirms that the council is expecting objections, but ends by claiming that the community will accept the merger in the end.

A source close to municipal government confirmed that this is the order of business for many councils. The scary thing is that the councils genuinely don’t seem to grasp that most important decisions require consultation with the community. They really think that decisions taken in council will just be disseminated and absorbed by the community and that life will go on.

The legal responsibilities of municipal councils to consult with communities are clear and unambiguous. Chapter 4 of the Municipal Systems Act is completely focused on community participation. Among other things, municipal authorities must:

Metsimaholo seems to fall short of some of the sections of the law. There is evidence of advertising in a newspaper but not of much else done. There appear to have been no radio broadcasts or information on the municipal website about the merger. MCR is on record claiming that councillors did not attend meetings that the community convened.

The municipality is certainly not the only municipality guilty of paying lip service to community consultation and participation. The legislation mandating municipal websites (and the posting of all important information to them) has been in place since 2004. In a 2009 desktop exercise I conducted while at the Centre for Applied Legal Studies it was found that 20% of all municipalities didn’t have websites. Another 20% didn’t have a single budget-related document on them.

Residents across the country, in metros and in small rural municipalities all have the same complaint: nobody listens to us and nobody consults with us. Whether the problem is with tariff increases, service delivery or input into the budget process the end result is the same. Questions go unanswered. Concerns are ignored.

It’s true that many community protests have been exacerbated or even instigated by political factionalism, and that shouldn’t be discounted. Internal politics in the Free State has been very greasy of late. There have been accusations from a number of sources against the premier. He in turn might claim that the violence has been politically motivated to make him look bad.

To be honest, criticism of Magashule’s leadership is completely justified. Between the auditor-general’s report on Free State municipalities and their shambolic blundering the evidence of gross financial mismanagement is plain to see.

Leading the pack towards infamy is Nala municipality. It has barely handed over any financial documents to the auditor-general’s office for five years. Last week it had the dubious honour of being the first municipality to have section 216(2) of the Constitution invoked against it when the Treasury cut off funding to it.

The money taps were turned back on shortly afterwards, but one must hope that the message has been conveyed to the criminally negligent in the province: national government is almost completely fed up with the pilfering and the waste and it is ready to put its foot down.

Poor governance of the province aside, the residents of Zamdela did have what appears to be a fruitful meeting with the MDB. That might be because the MDB has been the first party to communicate openly with Zamdela’s representatives. It should have been the last.

The point made by the MDB, that it should not have to do local and provincial government’s communication for them, still stands even if it becomes increasingly softer in the face of pressure from the minister.

The observable violence of the protesters did focus the country’s attention, and hopefully our gaze will not wander when things stop burning. The structural violence of the state’s neglect and disengagement will remain. DM

Photo: Zamdela, Sasolburg, Free State. The residents of Zamdela township rioted for three days to protest the the attempted demarcation of Sasolburg – a reasonably prosperous area due to Sasol and associated industries – into the municipality related to impoverished Parys. The residents blamed Free State premier Ace Magashule for it, as he comes from Parys area. At least four persons were killed in violent clashes. Photo Greg Marinovich/ Storytaxi.com