Behold the ‘second phase of the transition’: ANC’s big plans for the economy and the state 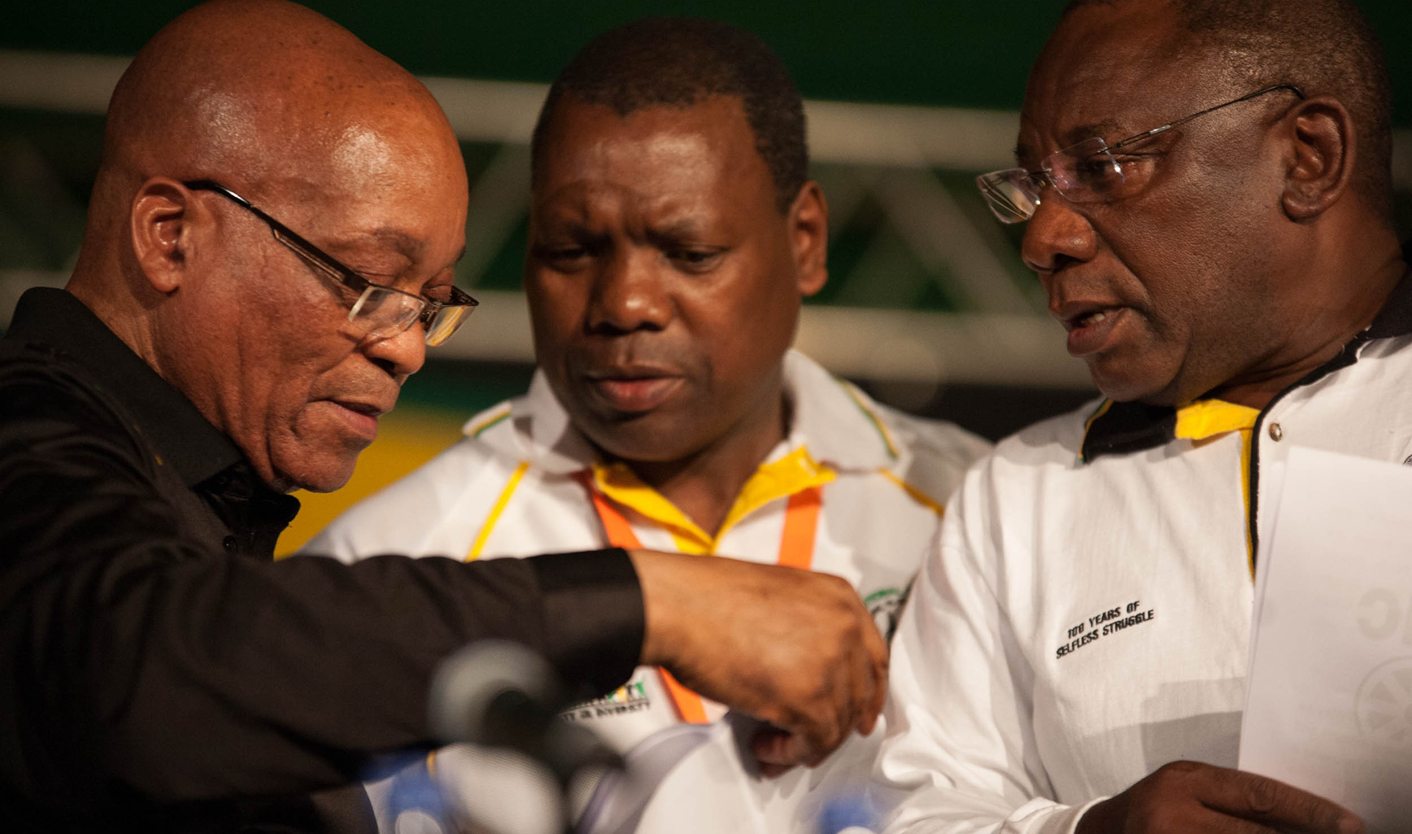 Amid all the election drama at the ANC’s 53rd national conference in Mangaung, the ruling party was also putting meat on the bones of the much-vaunted “developmental state” it has been talking up since 2005. Among other things, the ANC wants a “flexible monetary policy regime” and “bold forms of state intervention” to transform the economy. There is also some tweaking of the structure of government in the pipeline. In case you’ve missed it, South Africa is now in the “second phase of the transition”. By RANJENI MUNUSAMY.

The concept of a “developmental state” arose in the ANC in 2005 and was a central theme at the 2007 Polokwane conference. It envisages adjusting the orientation and focus of government’s policies and programme of action to advance socio-economic transformation in society. In reality though, there have been no tangible derivatives of whatever the state has been doing since then to re-orientate itself in the way the ANC envisaged.

Enter the “second phase of the transition” – in theory, an overarching approach to provide stimulus to shape the developmental state.

Last June’s ANC policy conference will be remembered for its bizarre, prolonged debate about whether South Africa was entering a “second transition”. This was based on the main policy discussion document circulated, before the conference, which argued that the country’s political transition was now complete and that a new transition focusing on economic and social transformation should begin.

The “second transition” document became controversial as it became a proxy debate for President Jacob Zuma’s campaign for a second term, pitting opposing factions against each other. However, it was eventually agreed that the increased focus on economic and social transformation in society should be called the “second phase of the transition”.

The resolutions of the ANC’s Mangaung conference, released this week, provide an insight into what the ruling party intends doing in the next five years to adapt the state so that these grand concepts advance beyond the rhetoric.

While the National Development Plan, adopted in its entirety in Mangaung, will be the guiding light for long-term planning in government, the ANC has spelt out in its economic transformation resolutions some immediate interventions to attempt to halt further stagnation of the economy and to stimulate development and growth.

The ANC says it wants to make government “a more capable and effective state, with the technical and political capacity to lead development and transform the economy”. It therefore wants “bold forms of state intervention”, which include:

The ANC has resolved that state-owned enterprises (SOEs) and development finance institutions (DFIs), such as the Development Bank of Southern Africa, the Industrial Development Corporation and the Public Investment Corporation, should also be transformed to be “key instruments of the developmental state”.

“This will require a comprehensive transformation of the policy framework and institutional architecture governing SOEs and DFIs,” the resolution states.

These interventions, as well as specific programmes, are likely to be fleshed out further in next week’s State of the Nation address as well as the Budget presentation later this month.

The ANC says government should increase its own capacity to deliver on its core obligations, including the provision of social infrastructure.

“This will require eliminating an over-reliance on tenders where this is consistent with the delivery of effective services. Tenders must be issued in an open and transparent manner that does not compromise our objectives in respect of service delivery and economic transformation.”

On macroeconomic policy, the ANC says the key objectives in the period ahead will be to counter economic volatility, support sustainable growth and a competitive exchange rate. After rigid adherence to the policy of inflation targeting, the ANC has bowed to pressure from the left in the alliance mandate for the Reserve Bank to be more flexible. It now wants social dialogue on the coordination of fiscal, monetary and incomes policies to support growth and transformation of the economy.

“South Africa requires a flexible monetary policy regime, aligned with the objectives of the second phase of transition. Without sacrificing price stability, monetary policy should also take account of other objectives such as employment creation and economic growth. In this regard, government should engage with the new wisdom developing on macroeconomic policy around the world in response to past failures and the global crisis,” the resolution states.

The resolutions on “legislature and governance” also look to adapting the state towards a more developmental focus. The ANC resolved that the powers and functions of the three spheres of government should be reviewed to provide greater clarity and facilitate more effective service delivery and development.

“National and provincial government should monitor and support local government in ways that strengthen municipalities, not erode their powers and functions.”

It was also decided that a presidential commission should be appointed to review the provinces, and make proposals on the role of provinces and the number the country should have, as well as their possible boundaries. This commission should report its findings to the next ANC national general council in 2015, and any changes that have to be made to the provincial system will be given effect to in the 2019 national and provincial elections.

The ANC says there are significant differences in the character of municipalities and therefore there should be a “differentiated local government model”. This should include “municipalities exercising different powers and functions from a common list, with differences based on such criteria as human settlement types; spatial characteristics; economic activity; revenue base; finances; and capacity.”

After the damning auditor-general’s report on municipal finances released last year, the ANC wants a major review of the local government financial system. Elements of the review should include research into the viability of a local business tax for municipalities, lowering the cost of borrowing from DFIs for municipalities, greater transparency in procurement processes and avoiding over-regulation of local government finances.

As a result of councillors being targeted during service delivery protests, the ANC has resolved that an insurance scheme of sorts should be looked into to cover damages to councillors’ houses and other properties. The national budget should meet this cost.

Possibly also in response to rampant community protests, the ANC also wants a once-off grant to municipalities to offset the backlogs in service delivery. The ANC appears unsatisfied with some of the decisions of the Municipal Demarcation Board (MDB) and wants a panel of experts to assist with a review of the role, scope and composition of the board.

This comes in the wake of violent protests at Zamdela last month over a proposed merger between Matsimaholo municipality in Sasolburg with Ngwathe municipality near Parys.

The ANC has scrapped the idea of a single election for local, provincial and national government as more frequent elections “give the ANC an opportunity to connect with the masses and renew our mandates”.

“Without separate local government elections, which open spaces in the state, it will cost the ANC more financially to reach our constituencies,” the resolution reads.

Many times in the past, the resolutions made at the elective conferences never really made it to reality. This time, however, the ANC finds itself, for the first time, in the uncomfortable position of having to deliver to the dissatisfied millions, and soon.

With patience running out in communities and the ANC entering into election phase ahead of next year’s polls, it is wholly dependent on these interventions yielding tangible results. The big plans, strategies and concepts that define ANC parlance will mean nothing if they do not produce jobs, improve service delivery and address poverty levels. How many of these resolutions are realistic and will be taken further? Depends on who you ask, of course. In order to even think of a successful developmental state, the ANC must step beyond the morass of incapacity, inefficiency and corruption plaguing the structures of the state.

If it continues to fail at this, no amount of transitions will stop the wrath of the people. This restless nation deserves, and should accept, nothing less. DM

Photo: Mangaung, Free State, South Africa, 20 December 2012. President Zuma was set to give the closing address at the ANC’s Mangaung conference Friday before the power went out. Photo Greg Nicolson/NewsFire