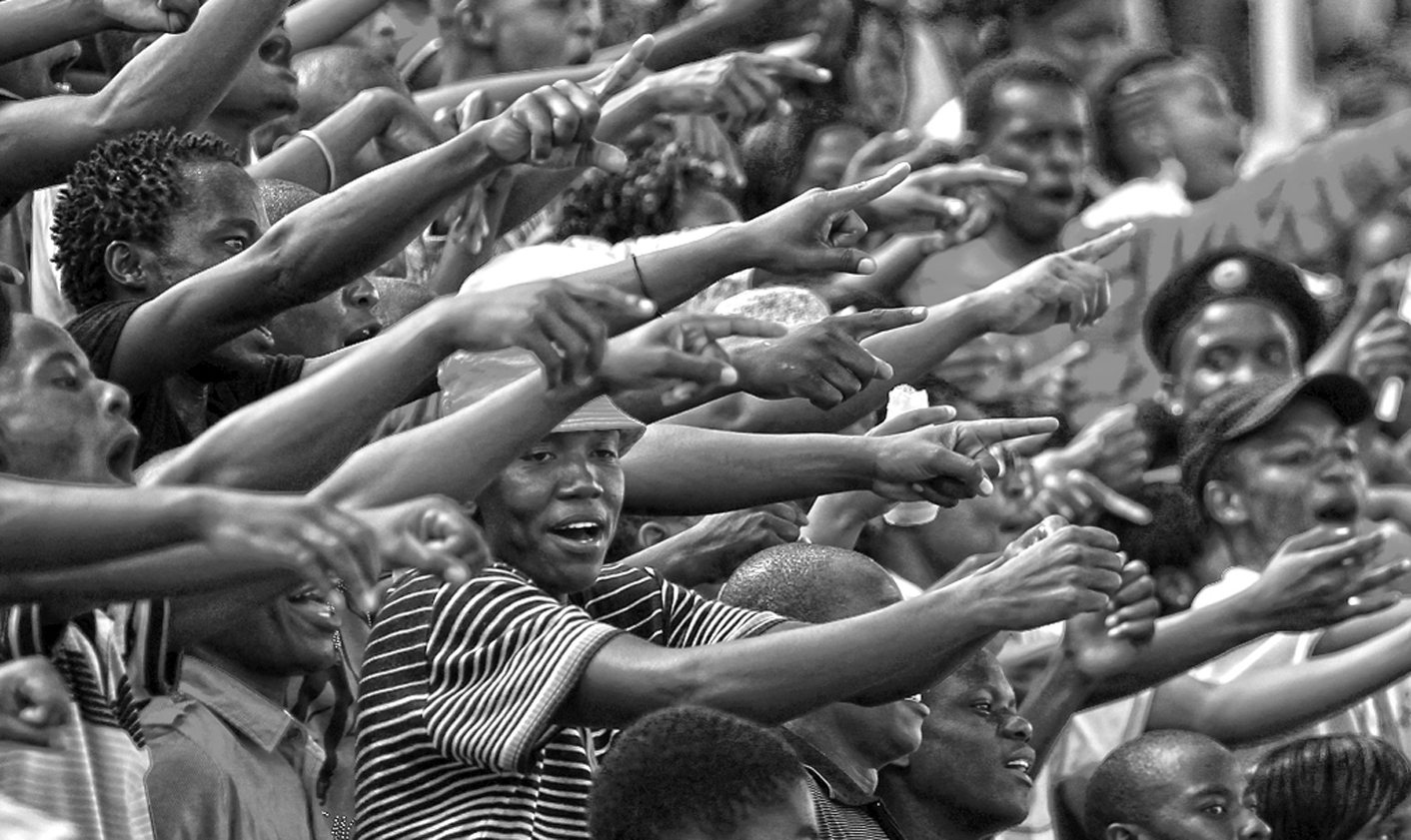 The Progressive Youth Alliance has kissed and made up, bringing together the ANC Youth League, Young Communist League, school and university students after years of bad blood. The key has been the expulsion of former ANCYL boss Julius Malema from the ANC. The alliance is now keen to get actual political work done, and the first hurdle is the debate on the inclusion of education in the essential services category. The choice of the alliance’s organised young people is not the one you’d think they would adopt, though. By SIPHO HLONGWANE.

The Progressive Youth Alliance (PYA) that held a press conference on Tuesday was a very different group to the one that shook the nation in September 2008. Back then, the organisation – made up of the ANC Youth League, the Young Communist League, the Congress of South African Students (Cosas), the South African Students Congress (Sasco) and other smaller youth organisations aligned to the ANC and the tripartite alliance – called the media to announce that President Thabo Mbeki would be sacked. Sure enough, the ANC’s national executive committee recalled him the next day.

This time around, the conference was to announce a roster of inoffensive policies and an upcoming PYA conference – an easy way of getting the press to tell the world on their behalf that all was well again.

A lot has happened between 2008 and now, and the change was illustrated by the most senior ANCYL person present at the conference, the deputy secretary-general Kenetswe Mosenogi. Gone were Julius Malema, Floyd Shivambu and Sindiso Magaqa, as well as the fight they brought to the PYA and the tripartite alliance (ANC, Cosatu and the South African Communist Party) as a whole.

The PYA proclaimed plans to lobby for changes to the matric results announcement policy, the points system at universities, the scrapping of the youth wage subsidy and general support for the National Council of Province’s rejigging of the National Youth Development Agency (NYDA). This is a considerable step away from the PYA’s posture during the Malema years. Its main concern is no longer the ANC leadership question.

Soon after Mbeki was removed from power, the ANCYL and the YCL fell apart. Malema and YCL national secretary Buti Manamela were central figures in President Jacob Zuma’s bid for power at the ANC’s 2007 national conference, and were often seen campaigning together. After Zuma’s victory, communist party leader Blade Nzimande took a public swipe at Malema, and provoked a blistering ad hominem attack that soured relations between the firebrand ANCYL president and the communist party, which included Manamela.

The YCL national committee responded to Malema and said: “Many men far greater and better than Julius have travelled the road that he seeks to embark, and many more of them were doomed to failure. We doubt if the majority of members of the ANC Youth League share his sentiment of insulting Comrade Blade Nzimande, as we know that many of them hold him in high regard. We also do not believe that insults should come first in the place of intellectual discourse, and that hurling insults is merely a form of expressing intellectual bankruptcy.”

The new alliance was quickly over, with Manamela becoming an ANC member of parliament and Malema choosing to go to war against Zuma. Sasco (the university students) began taking exception to some policies introduced by Nzimande as higher education minister, leading to a cooling of friendship with the YCL.

The PYA was split along factional lines, just like the tripartite alliance was.

Then came Malema’s cacophonous tumble from power. He happily took up the yards of rope that ANC secretary-general Gwede Mantashe dished out, and eventually hanged himself in spectacular form last year. With him gone, the entire faction not only lost comprehensively at the party’s elective conference in December, but was punished by being shut out of the top six, with many of them shut out of the NEC. From their side, Malema enemies like the ANCYL treasurer-general Pule Mabe, and Manamela, were elected onto the elite body. The lie of the land for Zuma’s second term couldn’t have been made clearer.

With Malema gone, the ANCYL quickly fell in line. Though it initially refused to elect a new president (under the easily-dismissible excuse that only an ANCYL conference could remove him), its deputy president Ronald Lamola took over those duties, and, crucially, refused to take a hard, anti-Zuma line like his predecessor. Pule Mabe, initially thrown out of the league for trying to campaign to have Malema removed, has been reinstated.

Malema’s brash, reckless ANCYL is no more. And since there is no longer any public disagreement on Zuma’s leadership, the PYA could reform and re-organise again.

Manamela said, “The most important thing is that we came together to tackle the issues that affect young people. There will be situations where we have different views, but that is not enough [to prevent cooperation]. In many instances it was a question of leadership, or who should lead the ANC.”

The YCL, Cosas, Sasco and ANCYL have had education policy campaigns before, but have announced a joint one to have all matric results released on the same day and not to the papers, as well as uniformity in access requirements for all tertiary education institutes, mandatory internships for all FET college graduates, and support for the higher education department’s transformation oversight committee.

The argument against letting independent providers like the Independent Examination Board publish matric results long before the public school system does is that it puts students graduating from the latter system at a disadvantage when applying at universities.

ANCYL’s Mosenogi said that the mostly black and poor students leaving public schools were disadvantaged by universities if their results came later.

The ANC NEC announced on Monday that it would move to have education declared an essential service, thus preventing industrial action in the sector. However, Cosas, Sasco and the YCL are opposed to any such move, while the ANCYL tentatively supports it.

Cosas secretary-general Tshiamo Tsotetsi said, “We are opposed to education being declared an essential service because this will ultimately end up with the demise of Sadtu [the South African Democratic Teachers’ Union] if they are denied the right to strike. Education has no direct link to saving lives. We have to draw the line somewhere, otherwise we will find that all public service will be declared an essential service to protect service delivery.”

“We agree in principle that education is important. But at times, teachers must utilise their right to demonstrate,” said Sasco secretary-general Themba Masondo. “We do not agree that their right to demonstrate, or even the right of students to demonstrate, must be taken away. What this [declaring education to be an essential service] means is that students’ right to strike will also be taken away. We cannot agree with that. Sometimes it is necessary to say ‘fine, we’ll meet on the streets’ if our demands as students are not met.”

By contrast, Mosenogi said that it supported the call to make education declared an essential service, but not the right of teachers and students to demonstrate. While this might sound like a contradictory statement, it is not. The ANCYL has found a way to have its cake and eat it, thanks to the ANC’s own dithering on the subject.

On Monday, Mantashe said that the NEC agreed that education was extremely important, and that it was important to make sure that industrial action didn’t negatively affect students, it did not want to take the next, logical step and have strikes in the sector banned altogether. What it wants to do is try and build social consensus and leave it at that.

“We firmly believe that if problems of overcrowded classrooms, school violence, inadequate infrastructure and learning materials, and under-qualified teachers can be addressed, education in South Africa will improve significantly.”

The ANCYL has chosen to mirror the position of its parent body, and thus keep everyone happy by agreeing that education ought to be an essential service, and then resisting attempts to legislate that position.

This is no mistake, of course. The ANCYL is all too aware of the danger that publicly opposing the ANC position. Soon after Malema, Shivambu and Magaqa were deposed, the ANC made noises about going after the rest of the league’s NEC for tampering with its constitution outside of a national conference.

At the Mangaung conference, there was a drive by some provinces to have the league disbanded, but that was averted by delegating the responsibility of ‘reviewing’ its leadership to the NEC, where it could sit for months like a sword of Damocles. The league knows that if it adopts a Malemaesque posture towards the ANC, it will be put down very quickly. This will be even truer if it alone adopts a confrontational stance towards the ANC without the rest of the PYA.

The slightly disjointed restart to the post-Malema PYA is a sign of its diminished influence and the understandable hesitance of the ANCYL to lead it aggressively once again. The memory of Malema’s downfall is too fresh, and without an external combining force (like gunning for Mbeki’s head), policy disagreements have inevitably taken centre stage.

With education looking like it could become a big tripartite alliance sticking point, the safest thing for the ANCYL to do is take a back seat. This will be vital in convincing the YCL, Cosas and Sasco (never mind the ANC) that it isn’t looking to play the role of king-slayer and disrupter any time soon. DM