Egypt: The messy, downward spiral of heavy-handed police and a beleaguered state 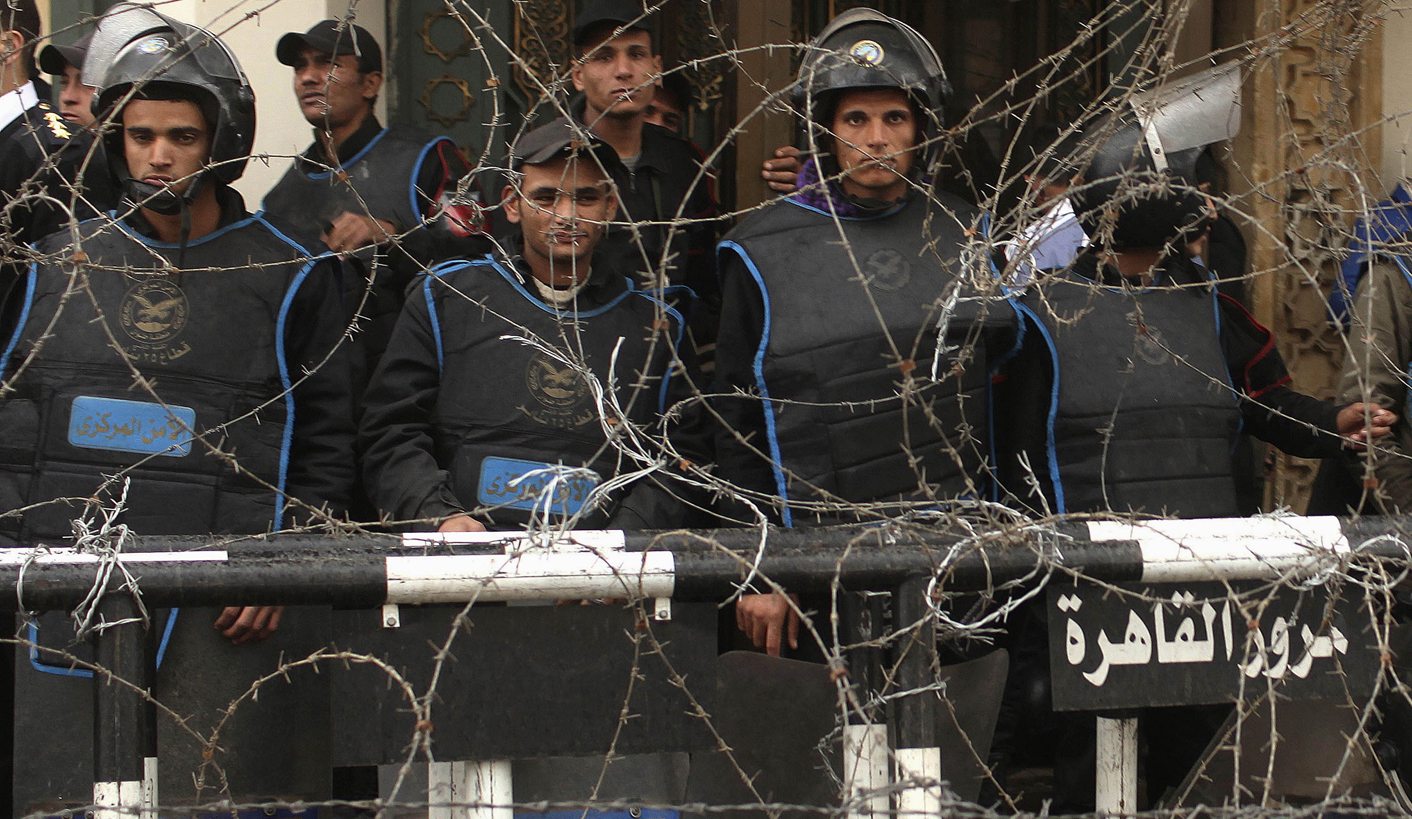 As Egyptian protesters battle police on the street for the essence of what it means to be Egyptian, it is the role of the police that has come under particular scrutiny. By KHADIJA PATEL.

Mohamed Saber, an Egyptian man who was beaten and dragged naked through the streets of Cairo by police during a violent protest last week, recanted an earlier statement and admitted Egyptian security forces were actually to blame for his assault.

Saber changed his story on Sunday, telling prosecutors that security forces attacked him, a day after he accused protesters of undressing and assaulting him. The beating was caught on camera by the Associated Press news agency, showing as well police trying to bundle the naked man into a police van after beating him.

The video, which was broadcast live on Egyptian television on Friday, prompted a swell of outrage in Egypt. Already protests were raging in the streets outside the presidential palace. And while the president’s office said it was pained by the images and called the assault “shocking”, the president, like the police, has been ineffectual in combatting the unrest currently gripping Egypt.

When football fans in Port Said were sentenced to death last month for their role in provoking a stampede at the city’s soccer stadium, killing scores last year, the verdict neglected to analyse the role the police ought to have played.

Writing in Al-Ahram, Khaled Fahmy says the events at Port Said Stadium in February 2012, “highlighted the dubious role of police officers and the top brass in the bloody incident and inability of State Security forces in Suez to control themselves”. He continues:

“These incidents confirmed once again how poorly these troops are trained and how unprofessional the entire apparatus is. Then came the death sentences, in this case against civilians and none of the officers charged in the same case; for many, that was viewed as evidence that the justice system is off kilter.

Instead of realising the dangers of neglecting this issue and leaving the police without reform, President Morsi took measures that deepened the crisis and made matters worse. He neither ordered an independent investigation of the bloody events in Port Said that followed the verdict, nor did he call in the top security brass to question them about excessive use of violence. Neither did he fire the minister of interior.”

Morsi declared a state of emergency, imposed a curfew in the restive Suez Canal cities of Suez, Port Said, and Ismailia, and awarded the military police judicial jurisdiction. But he was soon forced to back down from his decree of emergency law and suspension of civil liberties.

Morsi left it to the provincial governors of the three cities to decide whether or how to implement the emergency decree, or whether to annul it. His spokesman said it was not intended to suspend peaceful protests.

And yet, despite the chequered reputation of the Egyptian security services, the revolution in 2011 sought to remain peaceful. While protesters chanted their demands for bread, freedom and social justice, they exhorted each other as well to be “peaceful, peaceful”. And even though some 840 people died and a further 6,000 were injured in the name of revolution in early 2011, the movement to oust Hosni Mubarak from power was hailed for its emphasis on non-violence.

But even the Egyptian leaders have a lot of work to do to compensate victims’ families and restore Egyptians’ faith in the government. When Morsi took power last year, he was faced with the unenviable task of rebuilding trust in public institutions, which have long been seen as tools of repression and obstacles to justice. Meanwhile, the martyrs of the revolution have become political pawns.

And so it is that in clouds of tear gas, mostly young protesters battle with security forces for the essence of what it means to be Egyptian today and what it will mean to be Egyptian in years to come. Last Friday, when crowds braved inclement weather to demand Morsi step down, they also denounced the “Muslim Brotherhood-isation” of Egypt.

In the Daily News Egypt on Monday, the Egyptian Coalition for Child’s Rights (ECCR) said 91 children under the age of 18 were detained by Cairo police in allegedly inhumane conditions following recent clashes with police on the second anniversary of the January 25th revolution.

Ahmed Meslhey, a lawyer at ECCR, told the newspaper, “They were beaten with police batons and some had army shoeprints on their faces.”

Among a litany of other charges, the children were accused of “assembling on the streets, obstructing public transportation, attacking state employees, use of force, thuggery, beating and resisting policemen.”

CNN’s Ben Wedeman recently described ongoing clashes between Egyptian police and protesters as the “new normal” in Egypt.  In his report on January 29 he warned ominously, “After all this time, something has got to give.”

Significantly as well, Wedeman says senior army and police officers have begun questioning why they should risk their lives for a Muslim Brotherhood administration. Analysts point out that the police find themselves in the curious position of battling protesters they deplore on behalf of a regime they resent.

Egyptian president Mohammed Morsi is certainly not a popular man in Egypt right now. And as much as he has failed to win the confidence of the dissenting youth in the streets, neither has he been able to win over the security services.

Middle East commentator and Richard P. Mitchell Collegiate Professor of History at the University of Michigan, Juan Cole, warns in his blog Informed Comment that Egypt could well be on the path to a civil war. He offers the cautionary tale of Algeria where, in the course of ten years, some 150,000 Algerians died in a vicious civil war between secularists and fundamentalists.

“The same division is emerging in Egypt, and the secular and moderate-religious forces are increasingly rejecting the legitimacy of Morsi’s rule,” Cole writes. “Two competing claims to sovereignty are what make for a civil war.”

Cole, however, has no doubt about who is to blame for the current atmosphere of polarisation. He feels Morsi, by pushing through a fundamentalist-tinged constitution and by forming a Muslim Brotherhood government that excludes his opposition – even though he did not win the presidency by a very large margin – has furthered a culture of polarisation in Egypt. “His tendency to issue sweeping decrees and to favour his Muslim Brotherhood cadres has created a fear that he just wants to be a fundamentalist Hosni Mubarak and does not really have the instincts of a democrat,” Cole says.

Egypt may well be on a “messy, downward spiral”, but its challenges of a police force with ambiguous loyalties and an inclination towards brutality are certainly not unique. Here in South Africa, we too have discovered the pitfalls of a police service with dubious loyalties and a proclivity for unleashing violence on protesters. Tracking parallels in challenges between Egypt and South Africa is, however, far easier than actually finding a solution. But without a solution, Egypt stands on the verge of a return of martial law – and who knows what’s next? DM

Photo: Police officers stand guard during an anti-Mursi protest in front of the presidential palace, in Cairo February 1, 2013. Thousands of opponents of President Mohamed Mursi returned to the streets of Egypt on Friday, demanding his overthrow after the deadliest violence of his seven months in power. REUTERS/Asmaa Waguih