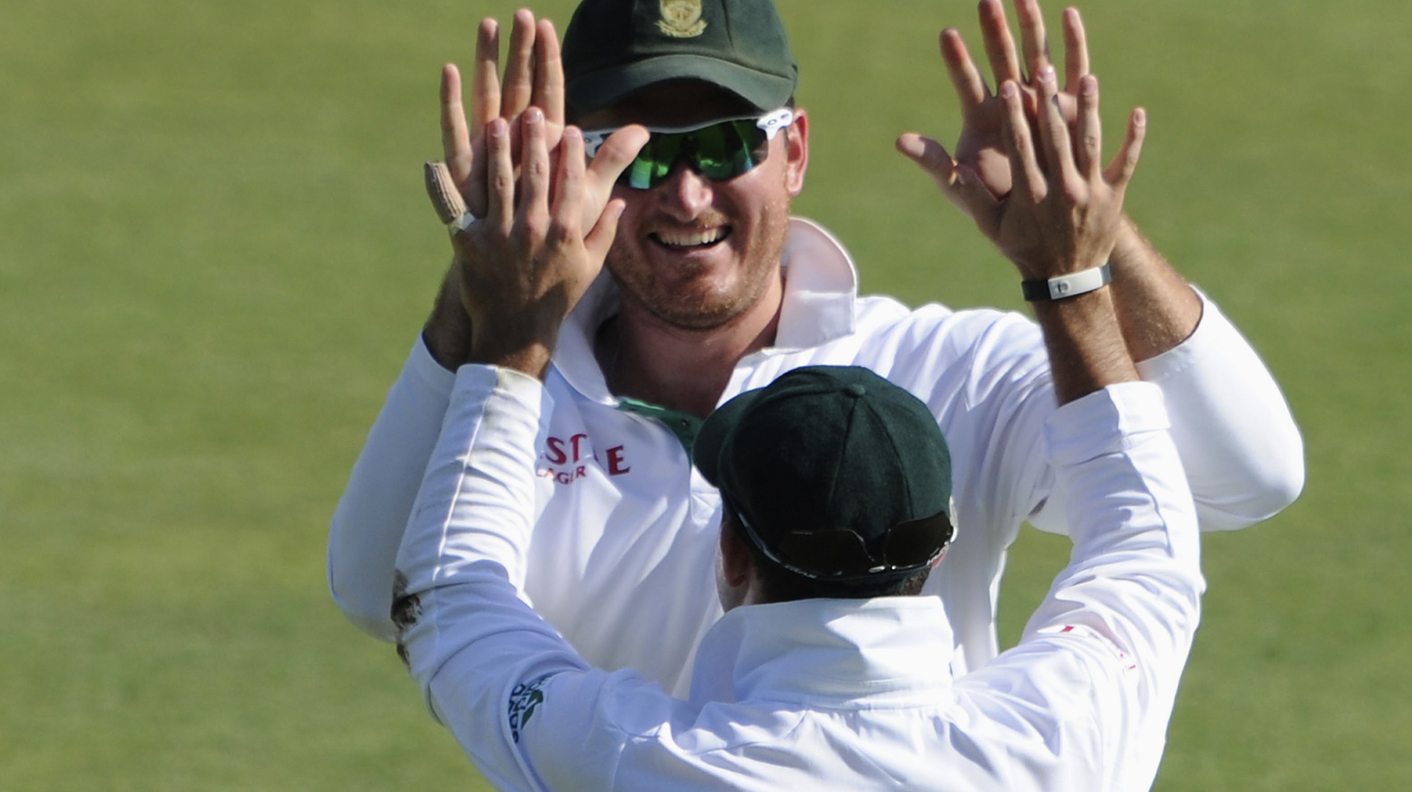 South Africa is getting pretty used to this business of finishing Tests before the five days are done. They have taken a 1-0 series lead over Pakistan with yet another fine and clinical performance, and with nine days off to recoup before the second Test, the Proteas are in the pound seats of the series. By ANT SIMS.

The Proteas did it again on Monday: they clinched a victory against Pakistan before lunch on the fourth day, thanks to some more fine bowling and a solid effort with the bat in the second innings.

It’s a familiar position for South Africa, being 1-0 up in a series and having completely trounced the opposition. What’s more, they’ve inflicted some mental scars that could last for days – while they, in turn, have some time off to reflect on what they achieved.

South African skipper Graeme Smith stood in his 100th Test as captain – while also celebrating his 32nd birthday – on the first day, and the hype leading up to the match was stupendous. Smith admits that there were some butterflies, but despite those nerves, the skipper managed to chip in with 52 at the top of the order in the second innings.

“It’s always nice to win the first Test. With the hype going into this Test, and certainly from a personal perspective, it was pretty busy. You always get a little bit more nervous around milestone games, because if things go wrong, people can ask a few questions. On day two we reached the height I believe we’re capable of achieving as a team, and it was exciting to see us do that,” Smith said.

Dale Steyn was one of the leaders of the assault. He picked up career best figures of 11-60 in a spell of bowling so fierce that a number of people described it as the best they had seen. Much has been written about the South African spearhead in the last few months, and it’s hard to find the words to describe his skill. The skipper, too, lauded the pace ace, saying it was he who sparked the collapse to 49 all out.

“Dale was outstanding in this match. He set the tone for us with the new ball on day two and everybody followed suit after he bowled so well,” Smith said.

Steyn was clinical in all aspects, but the rest of the bowlers might not been able to say the same in the second innings. Two wickets off no balls from Vernon Philander and Morne Morkel will be an indiscretion they need to go back and work on. It’s not something which has cost them a game just yet, but it is a problem, and has persisted for far too long.

Being dismantled for 49 on the first day is not a fun day at the office. Smith hopes the relentless aggression shown by his bowlers will continue to trouble the Pakistanis and set the team up for more success come the second Test at Newlands.

“I don’t know how much getting bowled out for 49 will affect them, but I do hope that our bowlers will affect them. I hope that they think about the type of bowlers they need to come up against and I think the work we put in on day three will stand us in good stead for the rest of the series,” Smith said.

While the series was billed to be much better than the drab affair against New Zealand last month, the Proteas won’t be resting on their laurels. They have become accustomed to being in the driving seat, but Smith knows the opposition will come back strongly, and the batsmen will have to pull their weight.

“I expect Pakistan to get better and better on this tour. The challenge for us is to keep bowling as well. Pakistan has a good bowling line-up too, and we need the batsmen to contribute,” the skipper said.

The hosts now hold a massive psychological advantage, and with nine days off before the second match begins, the Proteas have plenty of time to fine-tune the details.

Pakistan, meanwhile, will have to go back to square one and dissect where it all went wrong – finding a way to counter-attack the best bowling line-up in the world.

Not all is lost for the visitors, though. There were some positive signs, with Junaid Khan doing reasonably well with the ball and Misbah-ul-Haq and Asad Shafiq showing some of the tenacity expected from Pakistan. It will take one heck of an effort for Pakistan to bounce back, but stranger things have happened in sport – and Pakistan can be a rather strange team.