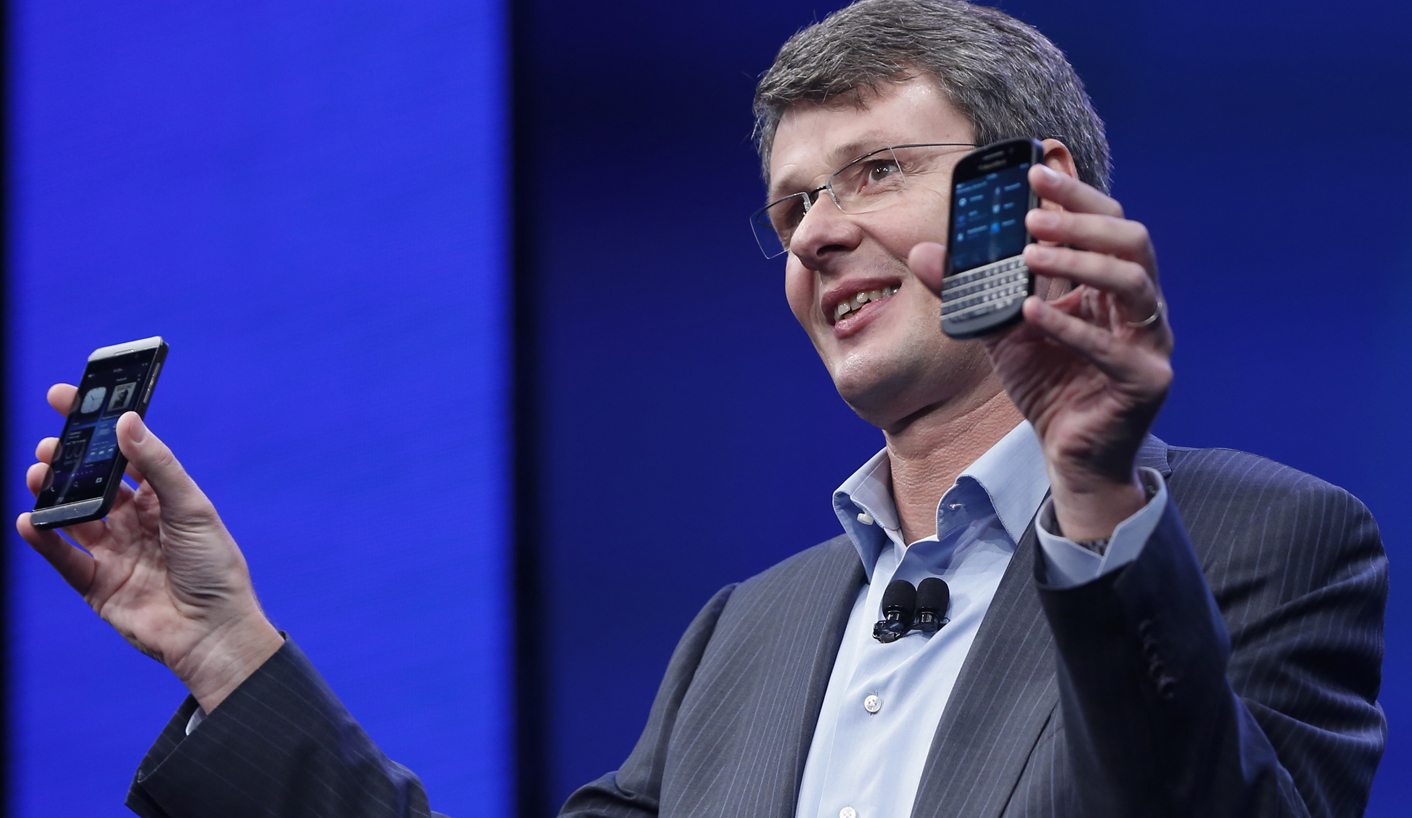 Wednesday was the day. Few iconic companies in recent memory have pegged their fortunes to a single event – even if that event signals a massive shake-up of their product line. But Research in Motion played Wednesday’s release of its long awaited, much delayed BlackBerry 10 OS as a day of universal reckoning. Consumers, however, will have the last say. By RICHARD POPLAK.

Thorsten Heins, the CEO of Waterloo, Ontario, based Research in Motion, stood before the world yesterday, performing the final moves in a yearlong, unsexy striptease. You couldn’t call the release of BlackBerry 10 an “unveiling”, because so much of the operating system, and the two new handsets that accompany it, have been leaked to developers and tech hounds in past months.

So this wasn’t a Steve Jobs moment – there were no “Awww, he’s done it again!” exclamations. More like a “Holy smokes, they might have pulled it off!” moment. Research in Motion is now renamed BlackBerry, most likely to disassociate itself with the disasters of the past few years. Once the market leader in smartphones and the highest valued tech company in the world, BlackBerry can finally stop sending out press releases written in the future imperfect. The company now exists in the present tense.

The present tense, however, is a tough place to exist, especially if your game runs you up against the iPhone, or handsets using Google’s near ubiquitous Android system. To be sure, neither of the market giants currently enjoy unmitigated critical adoration. The iPhone 5 is seen as a small step up from the 4S, with no groundbreaking features and a screen that a Samsung Galaxy would consider a snack. (Apple recently reduced orders of iPhone components from its production partners, which suggests the device is not selling as well as forecasters had expected.) While handsets running Android vary so vastly in quality, the OS itself tends to bear the brunt of consumer fury.

The problem is one of misaligned expectations: we’re all chasing the high of the first iPhone, the moment when we understood that our generation had been defined (or redefined) by a piece of technology. Smartphones are no longer leaping forward in design and capability, but are rather jogging along, making small improvements one release at a time.

Has BlackBerry ushered in the next Great Leap Forward? It has not. But it has nudged things along nicely. Which brings us to Herr Heins, and his BlackBerry 10.

Monday brought the announcement that BlackBerry has signed deals with a host of major film studios and music labels, and their goodies will be available for download at BlackBerry World, once the disastrous BlackBerry App World, which was stocked as poorly as a supermarket in Cold War-era Minsk. It’s a necessary move, but long, long overdue, and a huge indictment of co-founders and former joint CEOs, Jim Balsillie and Mike Lazaridis. (As with iTunes, movies will not be available to South Africans.) About 70,000 apps are immediately available, a fraction of Android of iTunes cache, but almost 90% of the top 600 will be ready for download.

Next, the phones themselves. Heins held aloft two models – one, the Z10, a boilerplate touchscreen phone that, at first blush, falls just about anywhere in the iPhone/Galaxy end of the market. The other, dubbed X10, is a touchscreen/old skool hybrid, clearly designed for the corporate set who have trained themselves to merge and acquire via the legendary keyboard.

But the whole caper depends upon the new OS, which was supposed to be released last year, but has been hamstrung by any number of delays. For the corporate customer, the BlackBerry Balance function will allow their IT masters to segregate personal information and products from corporate data. Should the BlackBerry owner be downsized, he or she can expect all company information wiped from the phone, but will still be able listen to Adele’s 21 as solace when leaving the building.

But what of Good Technology and SAP, older IT management devices that long ago solved the above headaches for tech departments? BlackBerry is going to have to convince them that upgrading to Balance is indeed an upgrade, despite the fact that this is a time consuming software rejigging. That’s an uphill battle that the company should never have been in the position to fight.

There is also BlackBerry Hub, which “flawlessly” integrates messages from email, Twitter, Facebook, IMs, et al, into a unified coagulant. This feature on the new phones appears to be a clear winner, and is certainly better than anything Apple offers. So simple, it makes you wonder why no one else has come up with it. It social networks the heck out of your phone, keeping profiles accessible and decipherable.

I’m not even going to try and describe the predictive text function here, but insta-reviews have been remarkably positive. It works on a swipe system that is supremely fast, and may wean some of those corporate raiders off of their ancient keyboard Jones. BBM now gets video calling, and a neat little feature allows you to share your entire screen with your conversation partner.

The hardware is equally impressive. The screen has more has a better resolution than the iPhone’s vaunted Retina Display, and the camera, front and back, rank with the best of them.

The company now holds about 2.6% global market share, and has been growing in countries like Indonesia and Nigeria – the subscriber base is 79 million people strong. But developing world nations outside Asia are unlikely to leap at a new, more expensive touch phone, so the new line-up is clearly aimed at First World consumers. RIM has about 0.004 seconds in which to capture their ever-roving interest. Incredibly, they might just have done that.

But never rule out BlackBerry/RIM’s ability to snatch defeat from the jaws of victory. In the States, the phones are only available with a three-year contract, which hasn’t exactly been embraced with longing. And there is the phone-maker’s history – not a storied one of late – which gives folks pause. But we’ll see. It could have done worse, that’s for sure. Will we still be BBMing in five years time? No idea. But BlackBerry has made a play, and it isn’t a bad one. DM