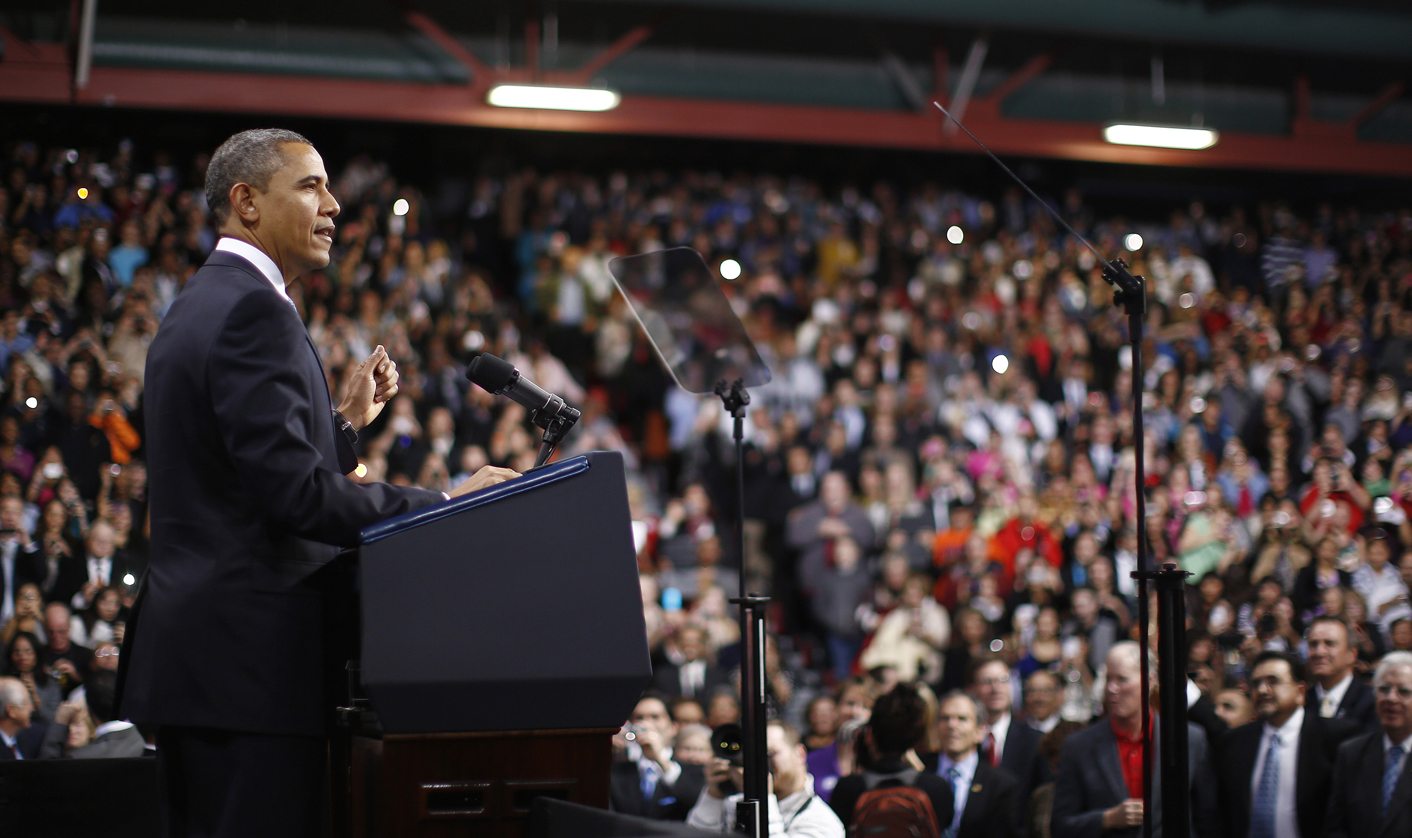 Just over a week into his second term, President Barack Obama took his fight for immigration reform to the West on Tuesday and pushed Congress to quickly find a path to citizenship for 11 million undocumented residents. By Matt Spetalnick.

But as Obama praised a bipartisan immigration plan during a speech in Las Vegas, disagreement emerged between the White House and Republicans that underscored the difficulty of resolving an emotive issue that has long defied a legislative fix.

“I’m here today because the time has come for common-sense, comprehensive immigration reform,” Obama said at a high school. “The time is now. Now is the time.”

After years on the back burner, immigration reform has suddenly looked possible as Republicans, chastened by Latino voters who rejected them in the November election, appear more willing to accept a thorough overhaul.

Action on immigration was sidelined by economic issues and healthcare reform during Obama’s first term but it is part of an ambitious liberal agenda the Democratic president laid out last week in his second inaugural address. That agenda also includes gun control, gay rights and fighting climate change.

Hispanic voters were crucial in winning Nevada for Obama in November and the crowd at the high school was supportive.

“Si se puede,” yelled some, using a Spanish phrase that harked back to Obama’s 2008 “Yes we can” campaign slogan. Some in the audience were brought to tears when he talked about the difficulties some immigrants have experienced.

In Washington, however, differences quickly emerged between what Obama would like and the proposals by the bipartisan “Gang of Eight” senators, whose plan is heavy on border security.

Obama pushed for a pathway to citizenship for illegal immigrants that is faster than the one the Senate group proposed.

Rather than emphasize border security first, he would let undocumented immigrants get on a path to citizenship if they first undergo national security and criminal background checks, pay penalties, learn English and get behind those foreigners seeking to immigrate legally.

“We all agree that these men and women should have to earn their way to citizenship. But for comprehensive immigration reform to work, it must be clear from the outset that there is a pathway to citizenship,” he said.

For Republicans, this is a sticking point. The Gang of Eight plan envisions first taking steps to toughen security along the U.S.-Mexican border before setting in motion the steps illegal immigrants must take to gain legal status.

That difference was enough to raise concerns among Republican lawmakers who are trying to frame a package that can pass the Republican-led House of Representatives.

“I am concerned by the president’s unwillingness to accept significant enforcement triggers before current undocumented immigrants can apply for a green card,” he said. “Without such triggers in place, enforcement systems will never be implemented and we will be back in just a few years dealing with millions of new undocumented people in our country.”

“This provision is key to ensuring that border security is achieved, and is also necessary to ensure that a reform package can actually move through Congress,” said newly elected Senator Jeff Flake of the border state of Arizona.

In addition, Obama made no mention of creating a temporary guest worker program geared to the low-skilled, labor-intensive agricultural industry. Labor unions do not yet support such a program.

Another point of contention is expected to be whether same-sex couples are granted the same benefits as heterosexual couples under immigration reform – something the White House says Obama will insist upon but which the Senate group did not deal with.

Obama’s speech in Nevada, coming a little more than a week after his second inauguration, reflects the growing clout of Hispanic voters, as does Republican willingness to move on the issue.

The president said that if Congress is unable to act in a timely fashion, he will propose immigration legislation of his own and “insist that they vote on it right away.”

Immigration reform could give Obama a landmark second-term legislative achievement, but the White House is mindful that success on such a divisive issue will require a delicate balancing act.

The last major attempt at an immigration overhaul was done by Republican President George W. Bush in 2007. It collapsed in Congress. Obama did not follow through with a promise to seek an overhaul in his first term, fearing a repeat of the earlier debacle.

“We can’t allow immigration reform to get bogged down in an endless debate. We’ve been debating this a very long time. So it’s not as if we don’t know technically what needs to get done,” Obama said.

Republicans who saw their presidential nominee, Mitt Romney, receive only 27 percent of the Hispanic vote in the election loss to Obama are adamant that steps must be taken to draw more Hispanics to their party’s ranks.

This could be a slow process to change hearts and minds.

“I don’t know about voting for them (the Republicans) yet but they definitely are starting to talk about things we want to hear,” said Maxima Guerrero, 22, a community college student in Phoenix. Originally from Morelos, Mexico, she was brought to the United States at age five.

In addition to dealing with Republican demands, Obama needs to watch his left flank, where unions worry about temporary workers’ programs.

And the American Civil Liberties Union warned against an erosion of rights under plans to tighten the employment verification system that determines whether a worker is in the United States legally.

“While there are components of the Senate plan that provide millions of aspiring citizens the legal status they deserve to live, work, and raise their families free of fear, others, such as mandating E-Verify and continued wasteful and unnecessary spending on the border, raise serious civil liberties concerns,” said Anthony D. Romero, ACLU executive director. DM