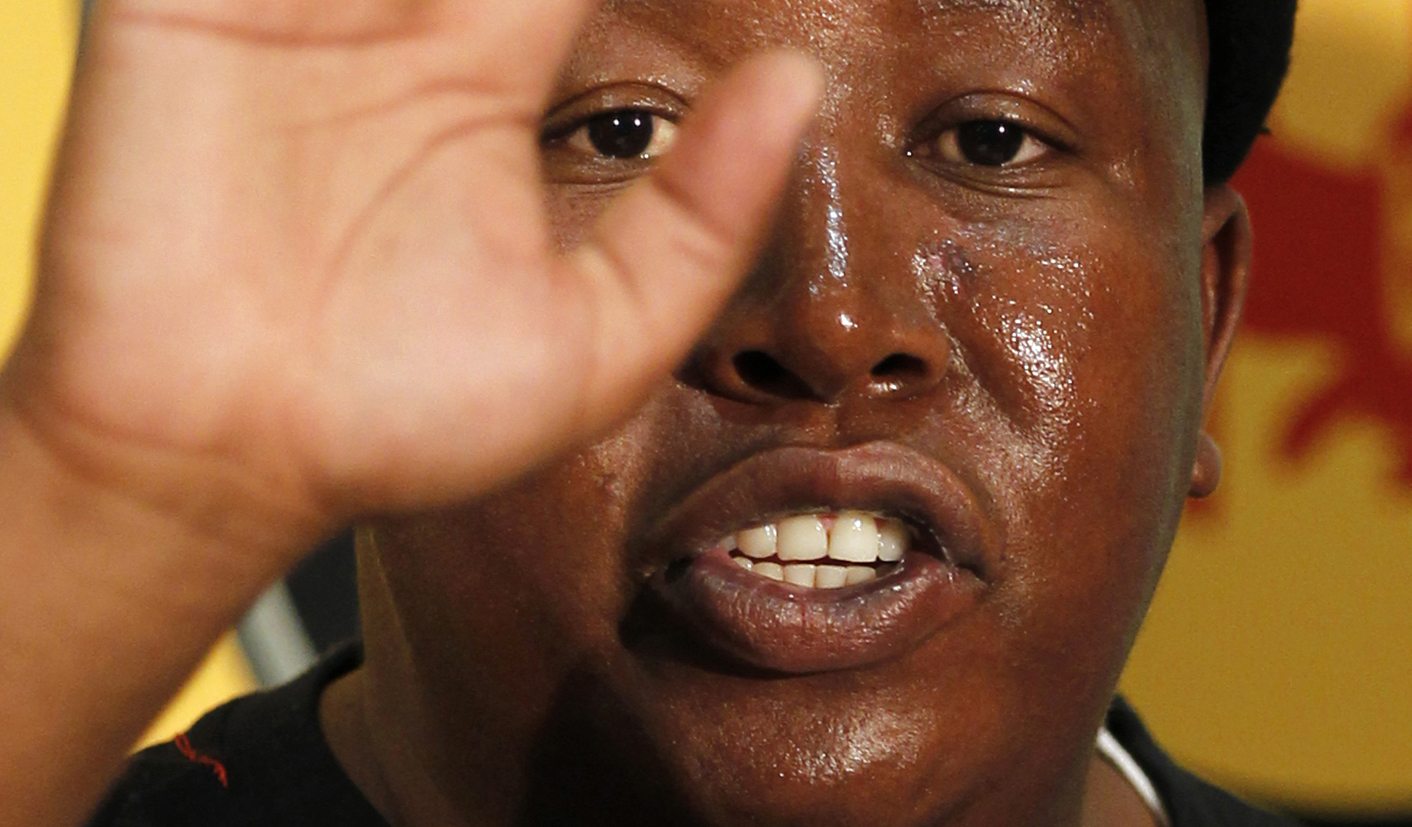 At the height of the battle between the ANC and its youth league, there were plans to disband the latter and convert it into a youth desk of the ruling party. But that turned out to be unnecessary. In a year, the ANC Youth League went from a militant force to a pacified, grovelling structure, surrendering completely to the will of the mother body. And it finally let go of its former leader Julius Malema, abandoning him to the political wilderness. By RANJENI MUNUSAMY.

ANC Youth League (ANCYL) press conferences used to be the biggest show in town. They were fiery affairs – invective overflowing, teeming with quotable sound bites and animated with the antics of Julius Malema and his crew. The media was in a constant debate with itself, wondering whether it was giving Malema and the league undue attention and the space to hog the news agenda.

Malema had become the politician South Africa loved to hate, scaring and infuriating people at the same time. He not only dominated the news agenda, he sometimes owned it. The ANCYL was shaped in his image and become an extension of him. He wanted the league to live up to its name as the Young Lions in the ANC, pushing the boundaries of militancy and shaking the foundations of the ruling party with radical statements. He claimed that was the intention of the league’s founding fathers.

Malema was created by President Jacob Zuma as a political Dr Frankenstein’s monster to bludgeon his enemies and help him fight off his legal battles. But Malema became a force unto himself and eventually turned on Zuma. When Malema declared war on Zuma and ANC secretary general Gwede Mantashe, the league was behind him, spitting insults and vowing that leadership change would come.

The top officials of the league, including its deputy president now acting as president, Ronald Lamola, and spokesman Floyd Shivambu were Malema’s support cast, keeping people spellbound with their tirades and colourful statements.

The country watched in anger and fear as the youth league’s supporters wrecked downtown Johannesburg in August 2011 and with incredulity in October 2011 as Malema and the League leadership led thousands of young people in an “Economic Freedom in our Lifetime” march on foot from the Johannesburg to Pretoria. Those were the glory days of Malema’s league, but the end was already close.

The following month, the ANC decided it had enough of the ungovernable force the ANCYL had become and Malema, secretary general Sindiso Magaqa and Shivambu were all suspended on various charges of ill discipline. It was the start of the unravelling of the league. Three months later, Malema was stripped of his title and membership of the ANC by the party’s appeals committee. Magaqa and Shivambu were suspended for one and three years respectively.

The expulsion of Malema was a masterstroke by Zuma and Mantashe to cut off the oxygen supply of the faction advocating for leadership change at the ANC’s national conference in Mangaung. The Forces of Change fell apart, Malema became increasingly irrelevant in the ANC and the league lost its militant edge.

But under Lamola’s leadership as stand-in president, the ANCYL vowed to fight to get Malema reinstated, to advocate for Zuma and Mantashe’s removal in Mangaung, and to forge ahead with the campaign for economic freedom, which entailed the nationalisation of mines in particular. This three-pronged campaign was dubbed “Asijiki”, an evocative Zulu phrase used in youth politics during the liberation struggle, which means literally “we do not turn back”. The only person in the league leadership swimming against the tide was the treasurer, Pule Mabe, who was suspended after being accused of supporting Zuma in the succession battle.

But by the time Malema was charged with money laundering in September last year, the league was showing signs of strain. It was becoming increasingly difficult for it to support its former president through his legal battle and also keep up the campaign in the ANC for leadership and policy change in an environment of heavy factional battles in the ruling party.

Without any binding force to hold the Forces of Change together, the league could not sustain its militancy and became progressively subdued. It had the additional problem of its candidate for president, Kgalema Motlanthe, being unwilling to give it any assurances that he would stand against Zuma and therefore be the figurehead of their campaign.

By the end of November last year, the relationship between Malema and Lamola had soured. In the days before Malema reappeared in the Polokwane Magistrates Court, he launched an extraordinary and brutal attack against his former deputy and ally, accusing him of being a “traitor” and “sellout”.

“He is compromised. He is gone. He has sold out… [With] his sellout tendencies he will never the lead the youth league,” Malema told The Star.

He claimed Lamola was quietly pandering to Zuma in the hope of taking over the league leadership after Mangaung.

“Without being asked a question, he just said we will accept the results even if Zuma wins. Even among the Forces of Change, Lamola is not anybody to be listened to. He is a traitor, he is not going to carry that mandate to its logical conclusion,” Malema said.

The attack on Lamola prompted the ANCYL to retaliate against its former leader, saying the comments were “mischievous” and that Malema was a disappointment to the youth.

“These blood-curdling remarks are not worthy of any leader, let alone one trusted by not only the youth, but thousands of South Africans, as he has demonstrated time and again,” the League said in a statement. Most of the League leadership did not turn up to support Malema during his November court appearance.

Since then, Malema’s world has come completely undone. The criminal charges against him and his business associates led to his financial support lines being severed, his political allies fled, his relationship with the ANCYL collapsed and his personal currency withered entirely. As Mangaung came and went, with the Zuma faction’s sweeping victory, he was cast further into isolation, having no role or relevance to any of the events.

Malema’s letter to the ANC conference asking for his job back was disregarded and the ANCYL made no real effort to petition on his behalf. In contrast to its former role as kingmakers in the ANC, the league was punctured during the Mangaung conference, even abandoning its campaign for the nationalisation of mines.

But this was not enough to appease its critics. A proposal was made to the conference plenary to disband the ANCYL national executive committee (NEC) due to its untoward behaviour during its term in office and the manner in which Mabe was suspended. Agreement was finally reached that the new ANC NEC would deal with the matter.

And deal with the league it did. Guns are out for the ANCYL, even though the acting leadership has made a concerted effort to lessen the aggression and wayward behaviour. Following a hard meeting with the ANC’s top officials, the ANCYL held an NEC meeting over the weekend. Its media release on Monday was a far cry from the fiery statements issued by the league in its former incarnation.

53rd national conference of the African National Congress; and committed itself to working with the ANC leadership collective elected and all members of the ANC in the implementation of the resolutions adopted at congress…

Its final word on Malema and his cohorts in exile was brutally curt.

“The ANCYL had taken and implemented a resolution to explore and exhaust all internal processes of the African National Congress on the expulsion and suspension of Comrades Julius Malema, Sindiso Magaqa and Floyd Shivambu. The 53rd national conference, a highest decision making body of the ANC, was to be the final arbiter in this matter… We accept and respect the outcome of the national conference, thus bringing the matter to finality.”

And the final insult to Malema’s legacy is the return of one of his arch-enemies to the fold.

“After intense and frank deliberations, the NEC resolved to reinstate the treasurer-general of the ANC Youth League, Comrade Pule Mabe to his position. The NEC acknowledged that no proper process was followed in the removal of Comrade Pule and resolved therefore to reinstate him to his position unconditionally. The NEC also congratulated Comrade Mabe on his election to the national executive committee of the ANC.”

It is not yet clear what process will be followed to elect a new leadership of the league and whether Lamola’s capitulation to the newly elected ANC leader will be enough to secure him the ANCYL presidency.

What is clear, though, is that this is officially the end of an era of the ANC Youth League as a gang of firebrands, churning up militancy among the ruling party youth and pushing the boundaries of political engagement in the ANC and the country.

Malema’s star has fallen. His ANC Youth League is dead. Asijiki is no more. The Young Lions have surrendered. But make no mistake: In their place could come a new crew of  Inglourious Basterds, this time better controlled by Dr Frankenstein. DM