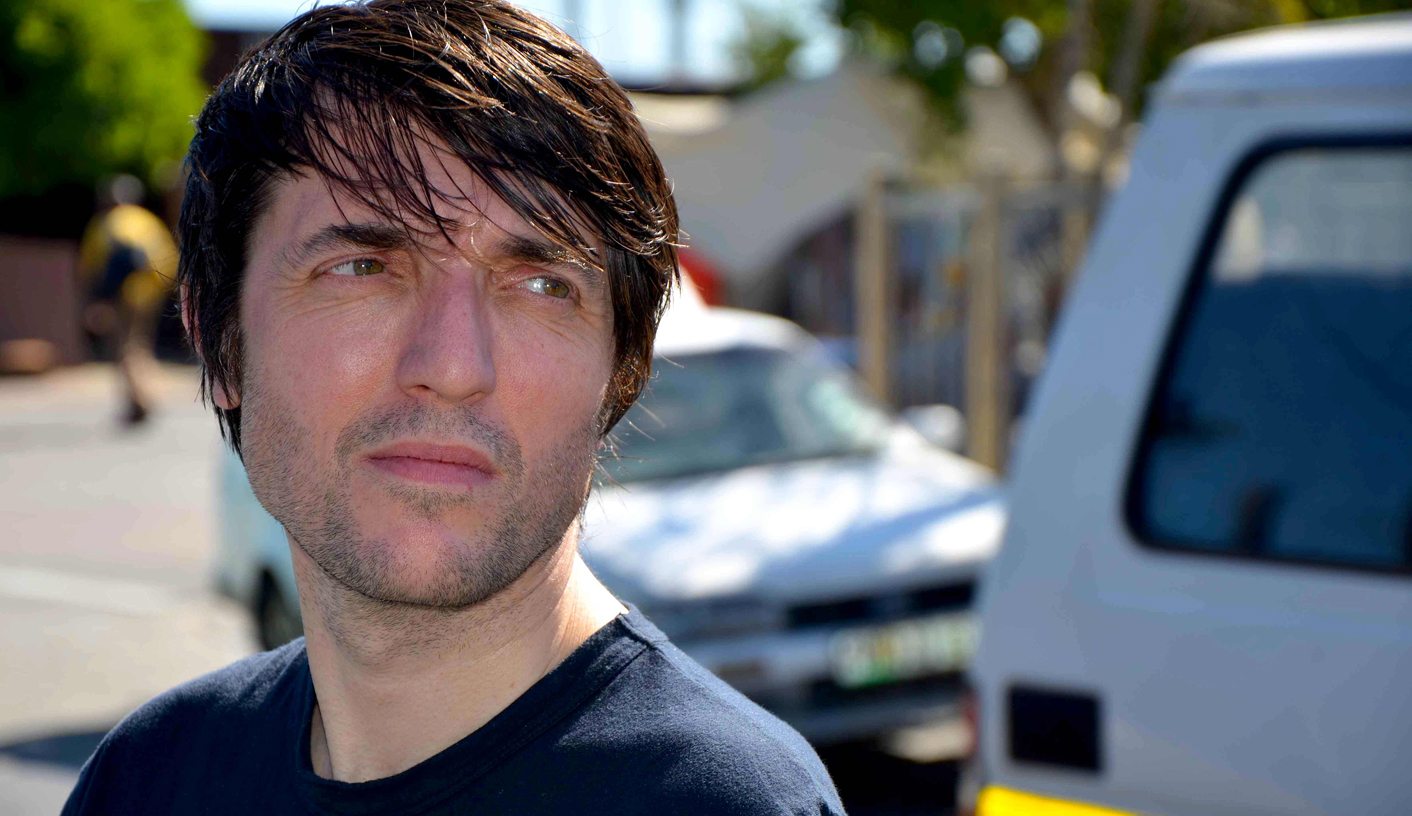 When the Daily Maverick caught up with Radiohead’s transcendent bassist and Radio Children’s Foundation (CRF) Ambassador Colin Greenwood in Cape Town last week, he jokingly inserted his legendary band’s name into that of the Foundation’s. Considering a seemingly genuine commitment to community-oriented work that sees Greenwood engage young radio reporters on what can comfortably be described as an equal footing, maybe the NGO’s revised title should stay. After all, it might be the only tie Radiohead has with SA. Oh, and to get shot of the question on fans’ minds upfront, alas, there are still no firm plans for the band to perform here. By KATE STEGEMAN.

Celebrity endorsements, attempts to attend (often corporate-sponsored) benefit gigs in order to “meet Madiba”, big bands dabbling in seldom-actually-substantive-and-sustained-Aid… These kinds of PR-loaded community endeavours are often met with skepticism. Charity handouts as a means to court public favour (not to mention tax breaks) and disingenuous commitments to addressing poverty and inequality in the developing world in general – and Africa in particular – get many a gag reflex going. So when certain excessively wealthy and pretentious stars smugly lap up credit for the so-called work they do to achieve world peace and stuff, they deserve to have snide comments and pot shots fired their way.

English musician Colin Greenwood, however, restored this journo’s faith in the big name-development nexus. Greenwood challenges many pre-conceived notions one may have of a rock ‘n roller – instead of being laden with a rather large ego as one might expect, for example, he’s an unassuming and softly spoken Brit. (In fact, his gentle demeanour borders on bumbling.) It’s as if his character matches his on-stage persona, as bassists often take a back seat; they are not the most visible, yet they are the backbone of any rock band. The complex rhythm and cadence provided by Greenwood’s basslines in particular are known for weaving ethereal and intoxicating spells into Radiohead’s songs, yet he has historically not received as much media attention as frontman Thom Yorke.

According to an interview he had with Rolling Stone in 1997, Greenwood (now 44) and Yorke co-founded the band back when they were teenage schoolboys, circa 1986. Some may call their songs music to slit your writs by; others laud the band for its ability seamlessly to blend contrasting rock riffs, modern electronica sounds and dark, moody lyrics littered with existential refrains.

So much for the background, then. What about the Foundation, and why? Greenwood tells Daily Maverick, “The Children’s Radio-head (laughs) Foundation gives young people the confidence and voice to describe their world and share stories that tell people what is going on in their lives.

“The main thing I love is the affirmation of young people’s curiosity.”

Supported by UNICEF, the Children’s Radio Foundation (CRF) operates in five countries across Africa. Executive Director Michal Rahfaldt explains, “CRF works with community radio stations to create spaces for young people to engage with the most pressing issues in their communities, from the quality of schooling to health services. Some projects have looked at drug abuse in their communities, and rather than just referring to statistics, the young reporters shared the stories of young people who were, or still are, addicted to drugs.”

Radio is a useful platform for pro-social engagement, believe the organisation’s leaders, as it is the most accessible, ubiquitous and equitable of mediums. And Greenwood’s commitment to the same principle shows: during a training session hosted by CRF’s HQ in Cape Town, the somewhat eccentric Cambridge graduate’s focus is on listening. His interactions with young broadcasters to are thoughtful, considered, open.

Rahfaldt is, predictably, excited about Greenwood’s dedication to the foundation: “He’s a die-hard supporter who pays attention to everything we do. He listens to youth-produced audio on our website and comments on and is concerned about it.”

As part of the CRF’s training, the young reporters and facilitators learn about different low-tech audio formats that require minimal editing. These include Public Service Announcements and “postcards”, radio programmes that endeavor to capture the essence of a place through the recording of natural sound alongside the presenter describing the scene and interviewing people in the space. “The teamwork of the three young trainers reminds me of my band practices when we were kids in a village hall in Oxfordshire and we didn’t really know what we were doing,” explains Greenwood. “The first time didn’t go very well and then the second time went a bit better and you’d learn from that… so what these young reporters are doing is like a live performance; if a mistake happens or something goes wrong, it flies by and you just carry on because you can’t stop.”

Acting as the presenter, Rishie Julius freely admits to finding the exercise difficult. Her baptism of fire becomes apparent when she struggles to get veteran flower seller Soraya to play along. Soraya gives the young reporter grief when requested to “tjop, tjop” the stems and rustle the flower wrapping for a second time. Soraya later seems mollified by Greenwood’s offer to act as a customer and buy a bunch of flowers, though; eventually, the strong-willed flower seller opens up – and admits that her flower-selling business is her whole life, the bedrock of her livelihood. Photo: Colin’s camera: as an avid amateur photographer, Greenwood taking pics and blogging about his experiences in SA (Kate Stegeman)

Reflecting on the experience, Julius tells the Daily Maverick: “When I first went up to Soraya, she was like, ‘You’re in my territory and now you’re trying to explain to me what I should do.’ I thought Id try make it better by saying to her because she is coloured and I’m coloured we could speak in Afrikaans. But she just looked offended and replied, ‘So you think I can’t speak English?’ Ja, she was very feisty, hey!” Lisa Zondo, who produces the flower market postcard, is confident, sassy and charismatic. The 22-year-old Vibe FM presenter and Young Reporter Network facilitator for CRF lives and works in the township of Kwa-Mashu in Kwa-Zulu Natal.

“Kwa-Mashu is known for the whole protest thing,” she says. “It’s scary – the protests happen across the road. The reporters in the station I work for are afraid of doing those kinds of stories.”

It’s not a safe place for a female reporter either, she adds. “Where I come from, there are so many gangsters, and the scariest thing if one of them wants a woman they want you and can take you by force.”

Nonetheless, Vibe’s involvement has had some impact in certain areas. “We do talk about corporal punishment in schools,” Zondo cites as an example. “My young reporters not so long ago tackled a principal about it. I don’t think they hit kids anymore, ‘cos they’re scared of our [exposes].”

Thierry Delvigne-Jean, chief of Communication and Partnerships at UNICEF, is full of praise for the positive achievements of the CRF and its trainees. He explains, “When UNICEF looks at the impact… its not only about [developing] technical skills, but it’s about life skills, which are particularly relevant in a country like South Africa, where young people have very [few] opportunities to look forward to.”

Rahfaldt, for his part, believes that the CRF facilitates a culture of greater faith in young people. He adds that the work CRF produces “shows communities that young people are not apathetic. They’re not lazy; they want to do things and they just need to be given the proper framework to engage.”

Greenwood, meanwhile, does not merely want to hear about the harsh realities faced by the majorities of South Africans. To him, it was important to get involved on the ground. He wants to visit impoverished communities and witness township living first-hand. So, following the training, we head to Site C in Khayelitsha. The first stop is a local HIV youth clinic, where we meet up with some iKasi Youth Radio Club volunteers and Medecins Sans Frontieres (MSF) staff members. Their partnership with CRF has seen the establishment of a youth-led radio club that produces a magazine show to encourage young Khayelitsha residents to visit the clinic, where they have access to advocacy-oriented material on health, education, human rights, gender activism and the like. After the clinic we walk the streets, stopping at a beautifully maintained library, a Spaza shop for Stoney, and a Tshisha Nyama place. Not surprisingly, the scenery is less filled with fake plastic trees  than very real corrugated iron shacks. The final stop is Khayelitsha’s Lookout Point. Photo: Greenwood snaps a pic of the view from atop the Khayelitsha Lookout Point (Kate Stegeman)

En route, Greenwood shares an anecdote about Radiohead’s tour of Brazil, which is plagued with similar levels of violence and inequality. On one of their days off in Rio, the band was keen to visit a favela, but had been warned they could only enter one of the notoriously unsafe slums if they were accompanied by private security guards. Greenwood explains that the Brazilian police seldom operate in any of Rio’s favelas and that the army is in charge of those impoverished areas. For Greenwood, South Africa is a refreshing experience: after all, we visited Cape Town’s largest informal settlement sans any backup. (That’s how we roll in Mzantsi, right?) Photo: Radiohead’s Colin Greenwood got to soak in some township street scenes when he walked around Khayelitsha (Kate Stegeman)

The next day, Greenwood heads to Manenberg in the Cape Flats, where he is interviewed by young radio reporters in a youth community centre. Greenwood quips that some of the more personal questions about his family are challenging and that the whole experience is one of his cooler rock interviews – better than some of the ones he’s done with Rolling Stone.

When I ask him the million Zim dollar question – whether Radiohead will perform in SA any time soon – Greenwood intimates that he is keen, but remains vague as to when it might happen. He doesn’t seem to be bothered, either, that many of the young community reporters he encounters on our trip through the townships don’t seem to be familiar with Radiohead’s music. Rather, he seems more interested in discovering some cutting-edge tunes born and basslined in South Africa (my parting gift to him is a Spoek Mathambo CD).

Greenwood will be spending the rest of his time in South Africa visiting community radio stations in the Northern Cape, North West and Gauteng. As for CRF’s radio newbies, best the likes of Redi Tlhabi, Eusebius McKaiser and Belinda Moses watch their backs, because there’s a good chance these talented young bloods will be vying for their jobs any day now. In the meantime, Rishie Julius, S’tembiso Ndumo, Lisa Zondi and the rest of the trainers will no doubt keep ripping up the airways and speaking the community’s truth to power.

One hopes that other famous folk visiting Africa in the future will start spending less time hobnobbing and backslapping at charity galas and more time interacting with the communities they purport to help. Then again, maybe Greenwood is a rare find. DM