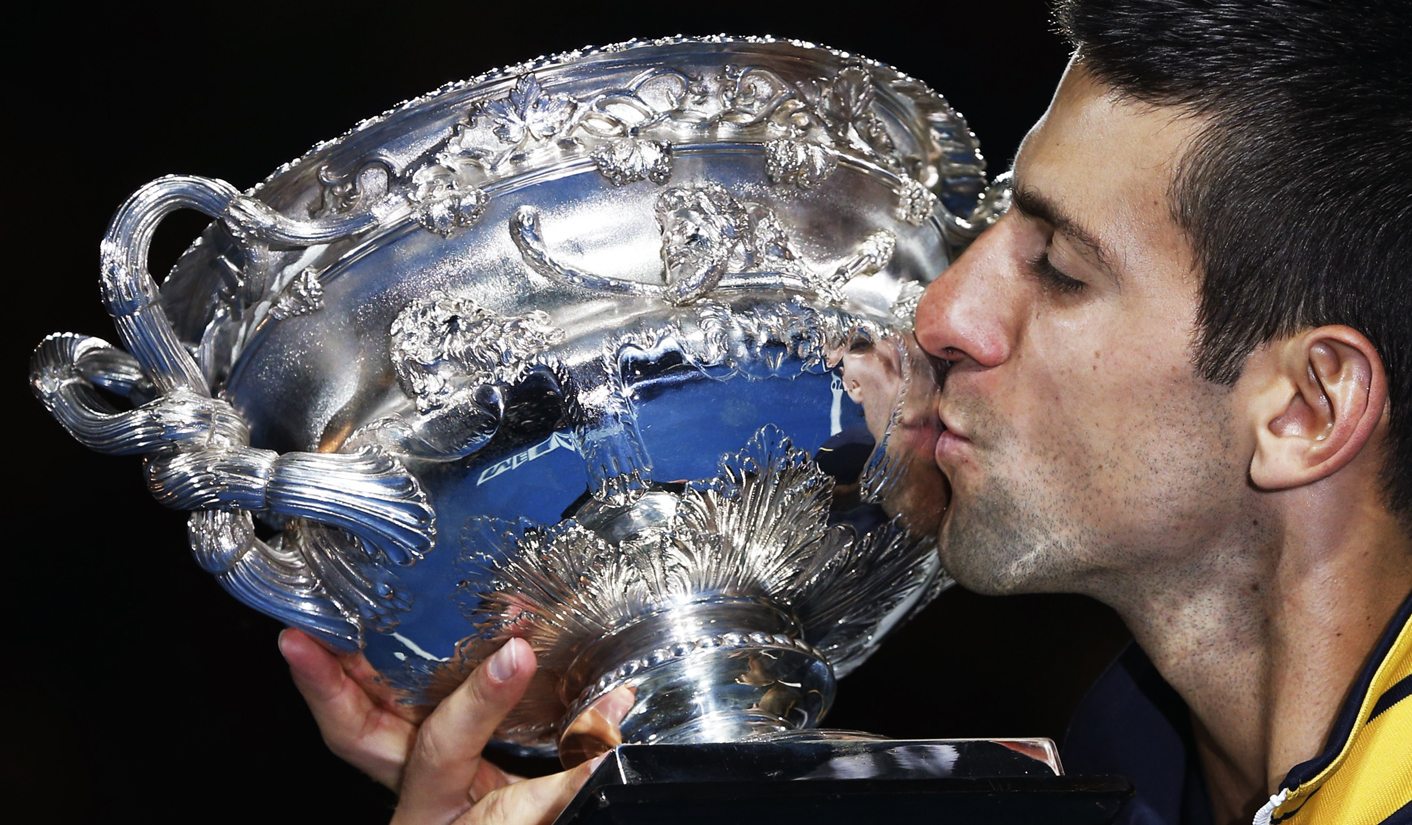 Novak Djokovic came up with his best tennis when it mattered most to reassert his grand slam dominance over Andy Murray on Sunday and become the first man to win three successive Australian Open titles in the professional era. By Nick Mulvenney.

The Serbian world number one played 171 minutes of cat and mouse with his British rival before pouncing when the U.S. Open champion blinked and racing away to a 6-7 7-6 6-3 6-2 victory.

There was no ripping off of the shirt and no victory roar like Rod Laver Arena witnessed last year, but there was no disguising Djokovic’s delight at claiming a fourth title at Melbourne Park.

His three successive titles were a first since Roy Emerson won his fifth straight in 1967, while a quartet of crowns matches Roger Federer and Andre Agassi, the latter being on hand to present him with the Norman Brookes Challenge Cup.

“What a joy, it’s an incredible feeling to win this trophy again. This is definitely my favourite grand slam. I love this tournament. I love this court,” said Djokovic, who lost to Murray at Flushing Meadows in September.

“Every tournament, especially the major tournaments, is very special (but) winning it three in a row, it’s incredible.”

The similarity of playing style meant the match, although studded with some brilliant rallies, was not the classic that fans have come to expect from grand slam finals in the golden age of men’s tennis.

So little separated the two 25-year-old baseliners, however, that two hours and 51 minutes of the contest had passed before the first break of serve.

Crucially, it went to Djokovic and 49 minutes later he was celebrating his sixth grand slam title.

For Murray, hampered by a badly blistered toe, distracted at a key moment by a white feather and physically compromised by his four-hour semi-final against Federer, it was a third final defeat in four years in Australia.

The Scot took some solace from the fact that this match was a much tighter affair than his defeats by Federer in 2010 and Djokovic in 2011.

“There’s going to be some obvious reasons for me feeling a little bit better,” said Murray, who was hoping to become the first Briton to win the title since Fred Perry in 1934.

“The last few months have been the best tennis of my life. I made the Wimbledon final, won the Olympics, won the U.S. Open. I was close here as well. It was close.

“I know no one’s ever won a slam the immediate one after winning their first one. It’s not the easiest thing to do and I got extremely close.”

Djokovic needed nearly six hours to beat Rafa Nadal in last year’s final and few were betting on a pre-midnight finish after the first two sets on Sunday took 133 minutes to get through.

The Serbian’s aggression gave him a slight edge in the first set and he claimed five break points only for Murray to save them all and then scoot through the tiebreak 7-2.

Murray took the momentum into the second set, where he won the first seven points to earn his first three break points but he fluffed his chances and Djokovic saved his serve.

“After that I felt just mentally a little bit lighter and more confident on the court than I’d done in the first hour or so,” said Djokovic.

A white feather which drifted down from the birds nesting in the rafters distracted Murray when he was serving during the tiebreak and he double faulted on his way to losing it 7-3.

“At this level it can come down to just a few points here or there,” said Murray. “Probably my biggest chance was at the beginning of the second set, I didn’t quite get it.

“When Novak had his chance at the end of the third, he got his.”

Djokovic opened the key third set game with a brilliant winner that just caught the back of the line at the end of a 36-shot rally.

He closed it out to go 5-3 ahead when Murray smacked a forehand into the net tape and then won seven of the next nine games to claim the title.

“I didn’t expect an easy match,” said Djokovic. “You never get the grand slam trophy in an easy way. You have to earn it.”

There was more success for 25-year-olds earlier in the day when Australians Jarmila Gajdosova and Matthew Ebden clinched the mixed doubles title, beating Czech pair Lucie Hradecka and Frantisek Cermak 6-3 7-5.

The day belonged to Djokovic, however.

“I’m just trying to play this game with 100 percent of devotion, love, passion, and fun also,” he said. “I mean, 25 years-old and I won six grand slams and have a lot of trophies.

“It’s amazing. I’m just trying to embrace this moment and enjoy it as much as I can and see where tomorrow brings me.” DM

The tortoise and the hare: Why a Covid-19 vaccine is outrunning its HIV counterpart

The paradox of local government: Sacrificing service delivery at the altar of equity