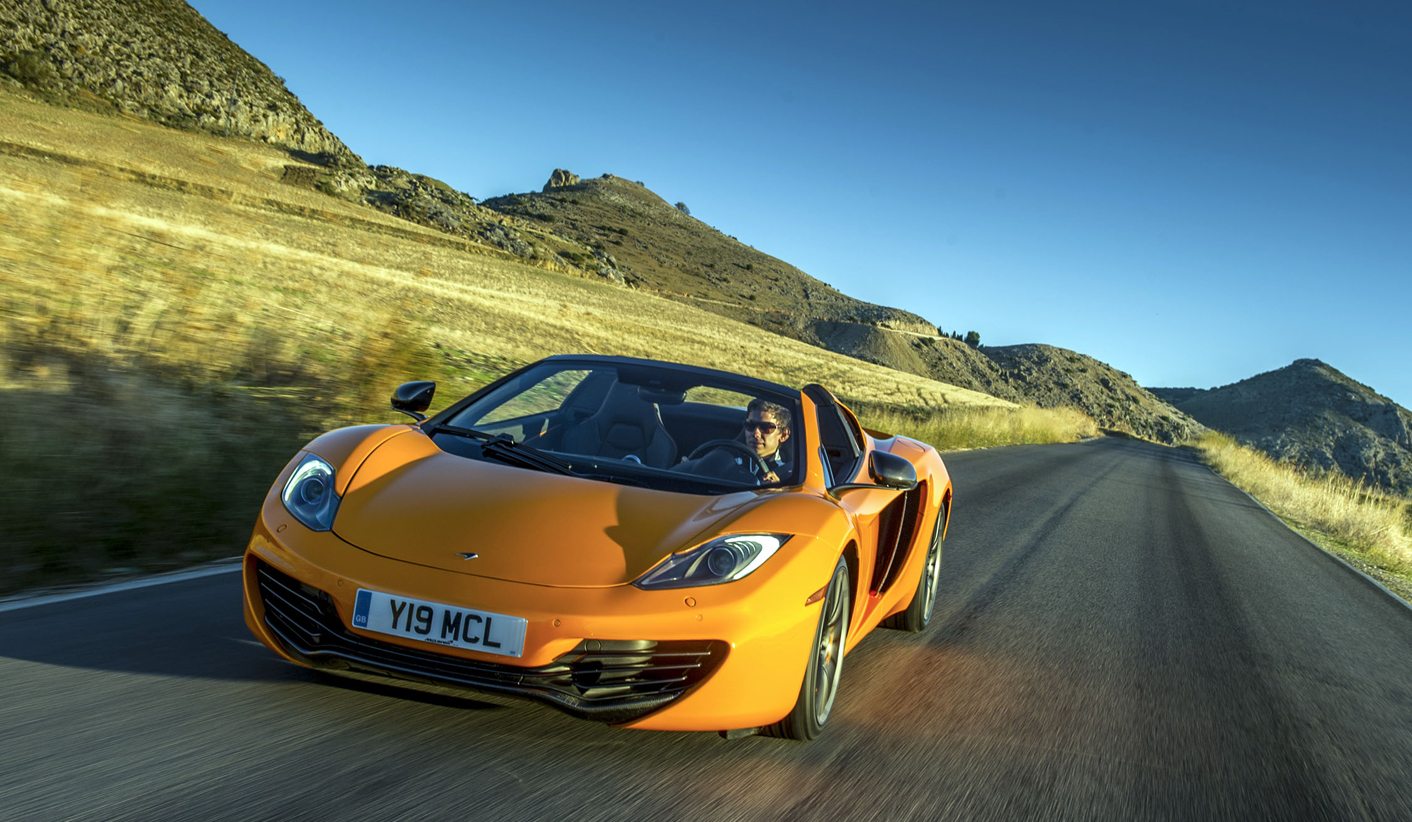 As the young upstart on a crowded supercar stage, McLaren has not always found the adulation and respect it had hoped for, despite the innovation and dynamic excellence of its supercars. But small production numbers mean it does have exclusivity on its side. And for now, the all-new Spider version is the most exclusive MP4-12C of all. DEON SCHOEMAN gets to drive it.

Supercars. Just the word creates an image of something low. And wide. And fast … and, most of all, exclusive. It’s that last word that, at least for now, is at the core of the McLaren MP4-12C’s appeal.

McLaren may have a 50-year racing heritage festooned with legendary racing machines, mostly in Formula One. But its road car history is not quite as illustrious. In 1992, the legendary, Gordon Murray-designed McLaren F1 road car recalibrated the very essence of supercar design. But in the six years that followed, only 102 were built.

Fast forward almost two decades later, and the McLaren MP4-12C became only the second road car produced by McLaren Automotive. As far as technology, innovation and desirable aesthetics are concerned, one could argue that the MP4-12C is the natural successor to the F1. But in reality, it is a very different expression of the supercar theme.

The Spider version has only just joined its fixed-head coupé sibling, but according to McLaren, it was developed in tandem with the coupé, and therefore is not merely an adaptation of the original. The most important benefit of this design’s approach is that the Spider needs no extra reinforcement, and that its performance data is therefore identical to the coupé’s. Yes it is slightly heavier, but only because of the roof mechanism and a different exhaust.

Supercars lend themselves to hyperbolic descriptions. Words like aggressive, low-slung, sleek and sculpted might all ring true, but none really capture the essence of the MP4-12C’ Spyder’s shape. The best single word I can come up with is “striking”. It’s a design demands attention, and gets it.

Penned by ex-Ferrari designer Frank Stephenson, the Spyder is every millimetre an MP4-12C with the roof up. In fact, only the narrow shutlines around the pillars give away the fact that this roof isn‘t fixed, but will articulate its way out of sight in just 17 seconds at the push of a button. Once the roof has been stowed in a hard-lidded compartment behind the seats, the Spyder’s true identity comes to the fore: it becomes the glamour kid in the McLaren stable, designed for leisurely cruises and occasional blasts down the boulevards of the Cote d’Azur, Cap Ferrat – or Cape Town’s Camp’s Bay, for that matter.

Something you’ll see a lot of on the Spyder is carbon fibre. And that’s no coincidence: carbon fibre is at the very core of the McLaren. Gordon Murray’s 1992 McLaren F1 supercar was the first to use a carbon chassis and monocoque. The MP412C follows that example, employing an extremely light, but very strong and rigid carbon fibre chassis with composite body panels.

Much of the carbon fibre is under the skin, but this test car also has a lot of carbon fibre trim in the cockpit as a fitting tribute to the car’s construction. And besides, it looks good, too.

The carbon fibre tub is fitted with front and rear aluminium subframes, each of which provides a home to a dual wishbone suspension with active dampers. Called ProActive, the dampers are interconnected, with a central air reservoir, and use sensors to determine the attitude of the car, allowing them counter lean and roll. The dampers can also be adjusted to suit road conditions and driving style.

The MP4-12C Spider has been designed as a driving machine, and the cabin layout expresses that intention convincingly. Given the car’s technical complexity, the controls and switchgear are lucidly arranged and easily operated.

But it’s the way the bucket seat is located low down and near the centre line, with the steering wheel framing a big rev counter directly ahead, and the pedals perfectly positioned, that sets the stage for an unequivocal dialogue between car and driver.

The cabin also offers a nice mix of high-tech functionality and elegantly executed comfort – nothing opulent, but special enough to create a powerful sense of well-being.

All the creature comforts are provided – from dual-zone climate control to keyless starting and remote central locking. A rectangular touchscreen display in the centre console provides access to Bluetooth telephony navigation and media from USB-equipped storage, iPods and iPhones.

Setting the handling and power delivery characteristics is as easy as using two rotary switches in the centre console to choose between normal, sport and track modes. Each setting changes damper rates, steering response, throttle mapping, stability assistance – and even the sound and loudness of the engine. Talking of the engine, one of the showpieces of the MP412C is the 3.8-litre twin turbo V8, mid-mounted behind the cabin. The all-aluminium unit is compact and lightweight, and drives the rear wheels via a seven-speed dual-clutch gearbox. The stats are impressive: 460kW of max power at 7,500rpm, and 600Nm sustained between 3,000 and 7,000rpm.

But the figure that really put things into perspective is the power to weight ratio. The MP4-12C Spider weighs just 1,376kg, which means the power-to weight-ratio is an eyeball-flattening 334 kW/ton.

The engine is a masterpiece. It revs with the rapid-fire linearity of a normally aspirated engine, yet delivers the low-down shove of a turbo unit, and revs to 7,000 rpm and beyond. Midrange response is exceptional, partly because of the McLaren’s relatively low mass.

The gearbox is at its best when the McLaren is driven with intent. At low speeds and gentle acceleration, it’s too tentative, especially in the first two gears – a malady common to many dual-clutch gearboxes. Sport should be the default setting, and once you start chasing the revs into the red, the cog swaps are quick and percussive, with a nice exhaust crackle when shifting down.

Supercar status infers the kind of supersonic performance that only the cream of the crop can manage. McLaren clams a 0-100 spring time of 3,15 seconds – quite astounding, considering this is a rear-wheel drive car.

The 0- 200km/h dash takes less than 10 seconds, and the quarter-mile drag will stop the clocks at 10,8sec, with a terminal speed of 221km/h. Top speed levels out at 326km/h, if you can find anywhere with enough space to cope with those kind of velocities.

Perhaps more important then, are the McLaren’s road manners. And in many ways, it is where the MP4 12C shines brightest. The ride is particularly impressive – pliant and composed, even over less than perfect surfaces, with an overall refinement that is plush in the supercar context. It corners with flat precision, and sticks to the chosen line with almost nonchalant ease. Grip levels are extremely high, and the steering has the kind of life and heft that allows precise, informed inputs.

The brakes are worth a specifc mention. Nothing exotic here: just big, well-vented cast iron  discs with massive callipers. The brake feel is on the sharp side, and could probably do with a little less boost, but fade is non-existent.

Of course, the MP4 12C has a secret weapon: an active airbrake that is deployed under hard braking, and contributes a retarding force equivalent to the stopping power of a Golf GTI.

There is no penalty for driving the Spider as opposed to its fixed-roof siblings:  no flex, no scuttle shake, no vibration or resonance. Top up or down, the McLaren pulls, steers, brakes just like the coupé – while entertaining you with that magnificent, bespoke V8’s aural pleasures.

Is the McLaren MP4 12C Spider a true supercar? Absolutely. And is it worth the R3,7 million base price, let alone the R4,6 milliion investment represented by the test car? In terms of performance, execution and innovation – almost certainly.

But – and here’s the million dollar question – can it stand its ground in the company of established marques such as Porsche, Lamborghini and Ferrari?

In pure engineering terms, it’s up there with the very best – perhaps, even, the best of all. But right now, the MP4-12C lacks some of the emotive appeal that only time and heritage can create.