ANALYSIS: Mamphela Ramphele to the rescue? 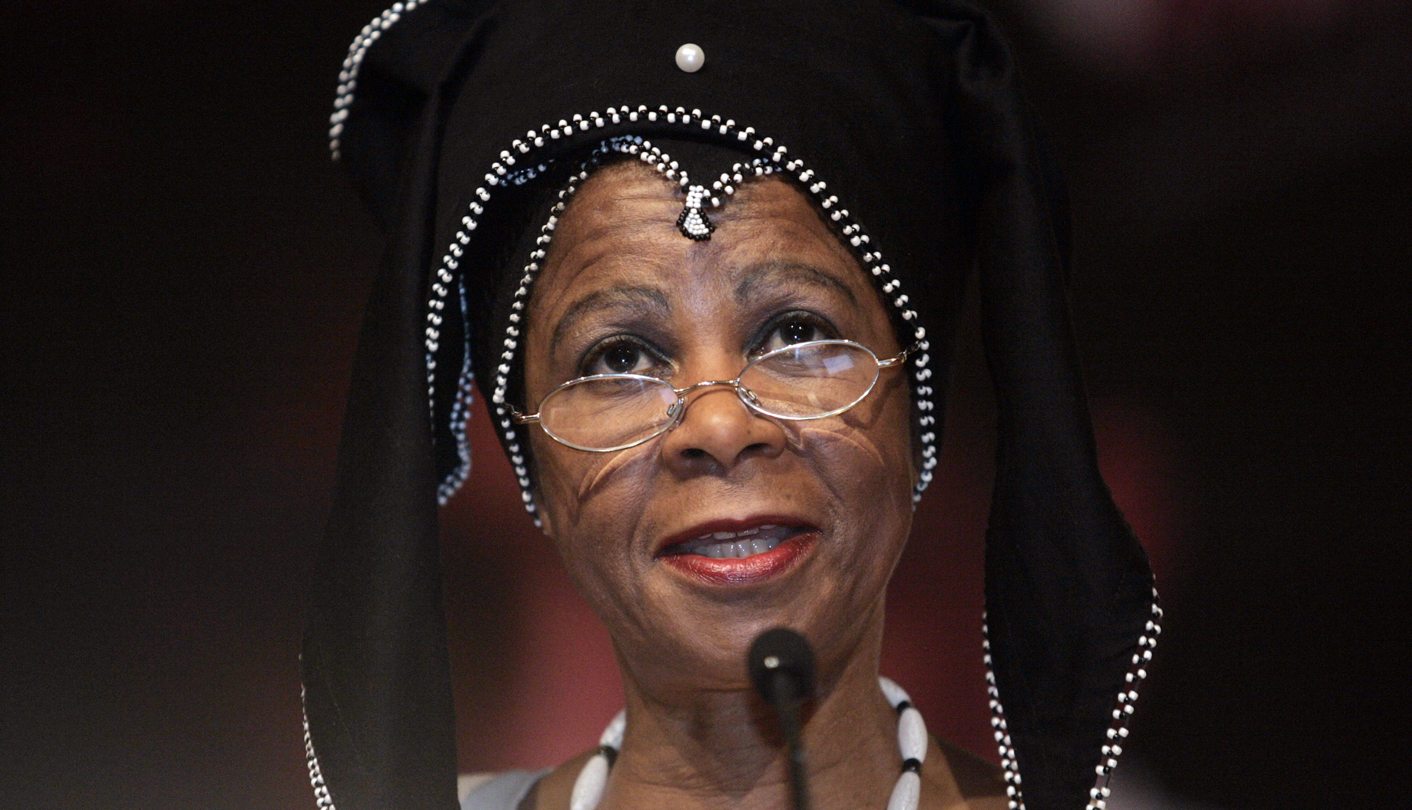 In what could be a game-changing move, the weekend media declared that all-round “superwoman”, Mamphela Ramphele, is set to enter politics. The ANC should take note and be afraid. Very afraid. By MANDY DE WAAL.

In one of the most optimistic developments in local politics in recent years, Black Consciousness Movement (BCM) forerunner Mamphela Ramphele looks set to enter South African politics. The weekend press reported that Ramphele said she was “entering politics to save her country”.

A former anti-Apartheid activist, who was in a relationship with Steve Biko (SA’s most influential black consciousness leader) until he was murdered by security police, Ramphele was Biko’s intellectual companion and sounding-board, helping him frame many of his political ideas.

One of the most respected women in her own country, and across the globe, Ramphele is a medical doctor who has spent much of her life championing civic activism, human rights, education, self-actualisation and a value-centric approach to politicking. A former managing director of human development at the World Bank and one time Vice-Chancellor at the University of Cape Town, today Ramphele is more recognised as an outspoken critic of the Zuma regime, an agitator for systemic change in SA through civic organisations she’s created, and for her numerous business interests. The chair of the board at Gold Fields, Ramphele is also holds directorships at Anglo American, Medi-Clinic, and Remgro. She also chairs education finance specialists, EduLoan, and Circle Capital Ventures, the empowerment investment company founded with her son, Hlumelo Biko.

City Press claimed that an announcement from Ramphele was imminent, and that she’d travelled to the US, where she told audiences she was raising funds for a political party. The weekly newspaper stated that she’d been lobbying support from ambassadors abroad.

Former DA leader and ambassador to Argentina, Tony Leon, told City Press that he’d had independent confirmation of this news from at least two people who’d attended the meetings. “One of these meetings was in Boston, where she spoke at the residence of South African-born (retired) Chief Justice of the Massachusetts Supreme Judicial Court, Margaret Marshall,” Leon told the weekly. “A friend of mine from South Africa was there. She said Ramphele was starting a political party and she was there to raise money,” said Leon.

One month short of a year ago, City Press announced that Ramphele was being courted by the DA. After the high-profile intellectual participated in a DA organised youth debate, the paper quoted sources close to Helen Zille, who said that the party leader had “been asking Mamphela for years” to throw her lot in with the opposition.

At the time, Ramphele’s retort was that she’d never joined a political party in her life. “I am not a joiner but a change agent. I have always seen my role as a change agent supporting any appropriate transformative process initiated by any South African,” Ramphele said at the time. The DA moved quickly to quash what it called “unfounded speculation” just before the party’s elective conference.

Ramphele has indicated that she will make an announcement shortly, and if City Press is on the money, there are three scenarios – that she’ll join the ANC, join the DA, or start a new party. Fiercely outspoken of the failings of the ruling party, the likelihood of Ramphele joining the ANC is the most remote. The black consciousness founder has lambasted the ANC and its leadership, calling the ruling party a bunch of partying, “champagne drinking” captains steering a sinking ship.

Her view is that under Zuma, the ANC is a regime that is destroying democracy, and that the ruling party has betrayed its founding principles as well as the Constitution. Censure aside, there’s a gulf in ideology. While the ANC purports to embrace the principles set out in its own constitution and The Freedom Charter, which speaks to equality, shared wealth, education, peace and friendship, the reality is very different. It has lost its liberation lustre, and is proving itself a conservative, nationalist organisation that’s “buying” loyalty through welfare pay-outs and cadre deployment. All the while, the ruling party’s building a self-serving, in-fighting elite that’s forsaken governance to enrich itself, and feuding to the point of policy paralysis and government collapse, in some geographies and departments. The ANC under Zuma can be summed up in one word – disappointment.

Or, as Ramphele told the BBC’s Andrew Harding when they met last July, “The key issue of the ANC is not a lack of policies. The key problem is leadership and capacity to govern. Is it possible to have a liberation movement transforming itself into a democratic governing party?” she asked. “There were glimpses of it during the Mandela administration… but the rest of the ANC, quite frankly, from the very beginning was more about taking control and… stepping into the shoes of the former coloniser. What we have currently is a corrupt, unaccountable government.”

Suffice to say it is likely to be a cold day in hell before Ramphele throws her lot in with a group she largely sees as morally bankrupt and incompetent. But what about the DA, given those earlier rumours about her supplanting Zille, and reports that the two are good friends? Zille did the exposé on Biko’s murder, uncovering the hidden story of the death-in-detention of the leader of the Black Consciousness Movement, at the hands of the Apartheid security police. Reportedly Ramphele has on occasion helped Zille pen policy documents and been a sounding board to the opposition leader, as she was to Biko.

Then there’s the matter that Ramphele has publicly supported Zille on certain issues, as she did when the DA leader was hauled over the coals by ANC secretary-general, Gwede Mantashe, for invoking Mandela’s image in the name of the opposition. The academic and civic activist rightly said that Mandela belonged to all, and made an important point about the local discourse being consumed by personality politics, rather than focusing on issues. “Voters need to know that they are the shareholders of South Africa Inc. and the real sovereigns of our democratic state,” Ramphele wrote in The Sunday Times. Mantashe is no fan of Ramphele, and has stated on record that he believes she’s campaigning for the DA.

Daily Maverick’s own associate editor, Ranjeni Munusamy, has spoken to DA “deep throats” who say it is only a matter of time before Ramphele joins the opposition. “Apart from being a respected figure in South African society, Ramphele happens to be one of the founders of the Black Consciousness Movement (BCM) and is also a strong advocate of ubuntu. Her BCM background is directly at odds with the DA’s principles, but her outspoken criticism of the ANC and standing in society overrides the contradictions,” Munusamy wrote.

Another option would be for Ramphele to start a new political party, which ironically is the advice that ANC spin-doctor, Jackson Mthembu, offered to her in November 2012. In reaction to Ramphele’s denunciation of the ruling party, this time because of its “exclusive elite transition” in the mining sector, Mthembu retorted that he “[did] not understand Dr Ramphele’s passionate hatred for the ANC and the president”, and added: “We do not know what we did to her … if she wants to be a politician she should start her own political party.”

Even more ironically, the formation of a new political party had been announced a month earlier in the Government Gazette, number 35,761 published on Friday 12 October 2012: “Notice is hereby given that the South African National Congress is applying for registration in terms of the Electoral Commission Act, 1996 (Act No 51 of 1996),” the Government Gazette read. The ANC immediately contested the name, and the media speculated that the party could have been founded by disgruntled members in the North West – a group sympathetic to Kgalema Motlanthe – who was trounced at Mangaung; or by Julius Malema loyalists. Some of the voices reported the news as Zuma’s move and part of his pre-Mangaung spin campaign.

While establishing a new party would be an expensive and formidable task, Ramphele commands respect and has the capacity to effect the improbable. Business accomplishments aside, she threw her weight behind the Freedom Under Law effort to challenge Zuma’s reinstatement of former police intelligence boss, Richard Mdluli. Ramphele went head-on with the National Director of Public Prosecutions, police commissioner, Minister of Safety and Security, the Specialised Commercial Crime Unit and the Inspector-General of Intelligence in the North Gauteng High Court. The outcome was that Mdluli was suspended. With her record and a battalion of heavyweight support, Ramphele could indeed accelerate the outcome of a new party launch.

A new party led by Ramphele would likely damage the ANC’s dominance, just as Cope did in 2009, when it eroded the ANC’s majority. The move would boost Zille’s vision for the “realignment” of local politics, through the creation of a broad coalition to unseat the ANC. Zille’s call to parties was that to give “up a small part of our political identities will be worth it if we can build a brand-new political vehicle to put SA on course and stay the distance.”

Speaking at the Cape Town Press Club in September 2012, the DA leader said: “I think South African politics will look different in a short while. I have discussed this with the leaders of other political parties and there is a broader understanding that political realignment cannot be avoided in the years ahead, although some people are desperately trying to prevent it.” Ramphele’s weight would give more credence and acceptability to a broad coalition opposition of this nature.

Most everyone but the tripartite alliance is likely to embrace Ramphele’s entry onto the political stage – if indeed she does confirm this move. The ANC and its cronies will undoubtedly try to undermine her, probably pushing ad hominem charges related to her “elitism”, being “clever” or being Biko’s “mistress”.

But one can just imagine Ramphele’s response. This is a woman who was shaped by the cruellest of life’s blows – she suffered enormously during the Struggle, and lost the man she loved and their firstborn child. There’s nothing in the ANC she fears. With the Constitution clasped firmly to her bosom, and Lady Justice by her side, Ramphele will hit the ANC where it hurts most – in the courts, at the feeding troughs, in the service delivery failures, the maladministration, the frauds, the lies and the chronicles of incompetence. And, given that she’s able to hold the moral higher ground, and loves her country and values, she’s likely to be a powerful alternative to the current political setup. DM

FROM OUR ARCHIVES: Hiroshima 70 years on: Was the Armageddon worth it?