Western Cape strikes: It ain’t over until unions say it’s over 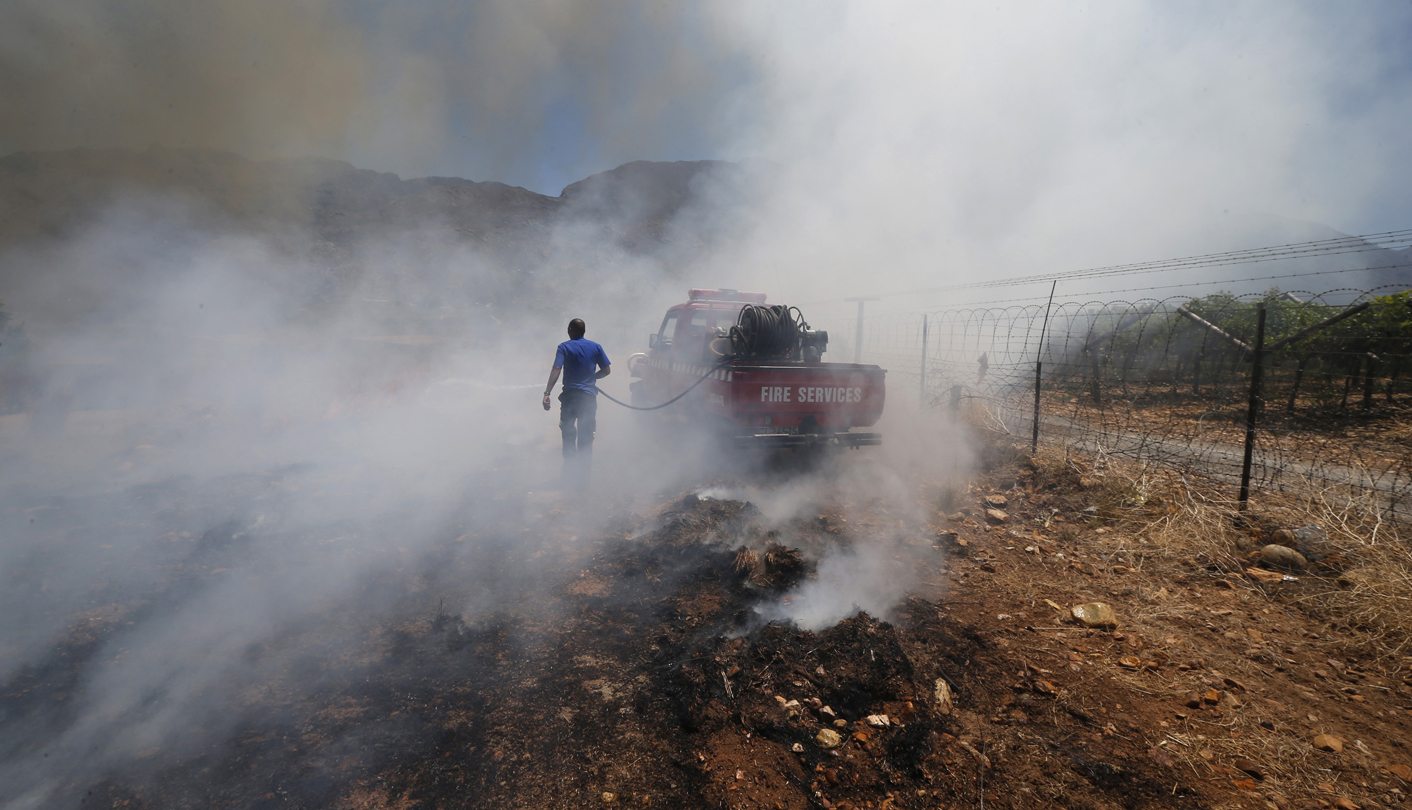 We at the Daily Maverick have already written our retrospective take on the apparently concluded farmworkers’ strike in the Western Cape. But it appears we may have been premature. Unions claim farmers are scuppering the strike’s suspension by not allowing striking workers back to work. Unless government urgently intervenes this weekend, they say, renewed protests will flare up again on Monday. By REBECCA DAVIS.

When the Congress of South African Trade Unions (Cosatu), the Food and Allied Workers’ Union (Fawu) and the Bawsi Agricultural Workers Union of South Africa (Bawusa) called off the Western Cape farmworkers’ strike this week, they said they were doing so on the understanding that striking workers would be allowed to return to work unmolested.

“We are cautioning farmers not to take any disciplinary action against workers for participating in the strike and will take action against farmers guilty of intimidation and victimisation,” Cosatu announced. “We are also cautioning farmers who have discriminated against workers participating in the protest. We are calling on the courts to release workers whose only crime was saying their children and families are starving.”

Yet there appeared to be no official acknowledgement of this requirement from farmers’ union Agri SA. In fact, it’s notable that Agri SA’s response to the strike being called off, issued on Wednesday, gave no specific assurance that returning workers would not face penalties from farmers. Indeed, the statement gave no particular commitment to change within the agricultural sector, and admitted no culpability from farmers or their representatives in how the labour dispute was handled.

“Whilst we acknowledge that farmworkers’ voices should be heard, we cannot condone their advisors and representatives’ actions which led vulnerable people into an unprotected and violent strike,” Agri SA president Johannes Moller said. He blamed the unions for putting out “continuous misrepresentations” about what was achievable both legally and economically. Moller said that it was inaccurate to claim that Agri SA should have been solely responsible for solving the dispute, as Agri SA was only one member of umbrella body Agri Sector Unity Forum.

Moller also took a defiant swipe at the perception of farmers as being particularly negligent employers. He described farmers as being “as law-abiding and caring employers as any other employer in the South African economy”, and added that “ironically, these so-called ‘bad farmers’ are in high demand in the rest of Africa.”

Now unions are claiming that striking farmworkers who attempted to return to work have been fired, sometimes in “large numbers”. Bawusa general secretary Nosey Pieterse told the Daily Maverick on Thursday evening that workers in Wolseley, De Doorns, and possibly a few other areas, had not been let back to work. “We are busy cataloguing numbers and cases now, and we will have exact numbers on Friday morning,” Pieterse said.

Bawusa claimed that there was one instance in which “truckloads” of workers were dismissed, and another in which “trucks drove into townships and dumped the clothes of farmworkers that were left behind on the farm on a heap on an open field.”

Bawusa has called a public meeting in De Doorns on Friday at 3pm to discuss the issue. If farmers and government do not collaborate over the weekend to resolve the matter, Bawusa says the strike will resume on Monday: possibly only in De Doorns, but possibly in other regions too, depending on reports they receive about worker intimidation or firing over the weekend.

This time around, both Bawusa and Cosatu are directing their pleas to national government, the Labour Ministry and the president rather than provincial government. Pieterse told the Daily Maverick that it was time for President Jacob Zuma to break what has hitherto been his “deafening silence” on the matter of the farmworker labour dispute. He also said that the government must step in to address farmers. “Government must call on farmers to show a change of heart,” Pieterse said. “Workers have agreed to go back to work in good faith, without any money on the table yet.”

Cosatu called on Labour Minister Mildred Oliphant to “urgently intervene” and immediately dispatch the Commission for Conciliation, Mediation and Arbitration (CCMA) to try to resolve the issue. “Should this matter not be resolved over the weekend, there is a bleak forecast for Monday, is all the workers would say,” Cosatu warned. “This renewed protest seems set to flare up in De Doorns tomorrow, and there is a real danger that it will spread to other towns. The historical hostility between farmers and farm workers can boil over into a revolution at any time and the attitude of certain farmers is not helping this situation.”

Cosatu has been particularly vehement in its criticism of Michael Laubscher, head of the Hex River Valley Table Grape Association, a fifth-generation farmer. Cosatu claims Laubscher has been refusing to engage with workers. They also allege that there is a growing rebellion against Laubscher by farmers in the De Doorns area because his own labour needs are relatively small, so he is largely untouched by the dispute, whereas other farms are more dependent on local workers.

Both Cosatu and Bawusa have called for donations to help sustain the striking De Doorns workers. Cosatu said that such workers had its full support, and that if the weekend did not bring resolution, it would file a Section 77 application against “bad farmers”. (Section 77 of the Labour Relations Act deals with the rights of workers to engage in protest action to promote or defend socio-economic interests of workers.) Cosatu also promised to call for a boycott of the purchase of supermarket grapes, and said it would call on workers not to handle grapes.

Meanwhile, the call to boycott South African wine and fruit has spread to the UK following a Guardian report on the farmworkers’ protests. On Thursday evening a poll was running on the Guardian’s Comment is Free section, explaining: “Agricultural union leaders in South Africa are calling for consumers to boycott wine, grapes and granny smith apples as workers protest against pay and conditions. Many of the 500,000 farm workers on the Western Cape are demanding a pay rise from £4.92 to £10.62 a day – will you join the boycott?” The results of the poll were unclear at time of writing.

UK supermarket giant Tesco told the Guardian, however, that it would likely not be getting involved. Director of ethical trading Giles Bolton said: “The whole South African agriculture sector is very little unionised and it would help if there was a more mature industrial relations atmosphere. However, it is not for us as a company to dictate to a foreign country that ‘you must pay X’. I think the African National Congress government would query us for saying such a thing.”

Agri SA’s Moller labelled boycott calls as “a short sighted sabotage effort against this country, its industries and its workers”, adding that those responsible should be “held accountable by those who could be negatively affected in this regard.”

The Employment Conditions Commission was set to meet on Thursday for a “decisive” meeting to consider all the submissions made during their public hearings into the wage issue. Cosatu claimed, when calling off the strike on Wednesday, government had definitely agreed to a new minimum wage above R100. “We welcome the announcement by National Government to increase the minimum wages by 1 March 2013 by more than R100,” its statement read. In reality, there is no indication that any such commitment has been made. Titus Mtsweti, a senior official at the Department of Labour, told Reuters on Wednesday that “There is no indication on what the wage increase will be,”

In the meantime, there’s more fighting talk from Bawusa.  A hint that Bawusa was never fully convinced of the wisdom of calling off the strike was given by Nosey Pieterse in a Facebook update on Thursday, where he wrote: “I consistently said that we cannot call off the strike because our people are in jail and more than 500 have been charged. I said that we are going back to the lion’s den. Vindictive boers who are going to fire our people. All this was and is true.”

Pieterse continued: “It is clear that the strike will resume much earlier than what I have anticipated. But this time it must be bigger, better and bolder. All justice loving South Africans must join us. Prepare and report for battle. Aluta continua. See you in the trenches.” DM