The DA’s future: When ubuntu, Africanness and liberalism collide 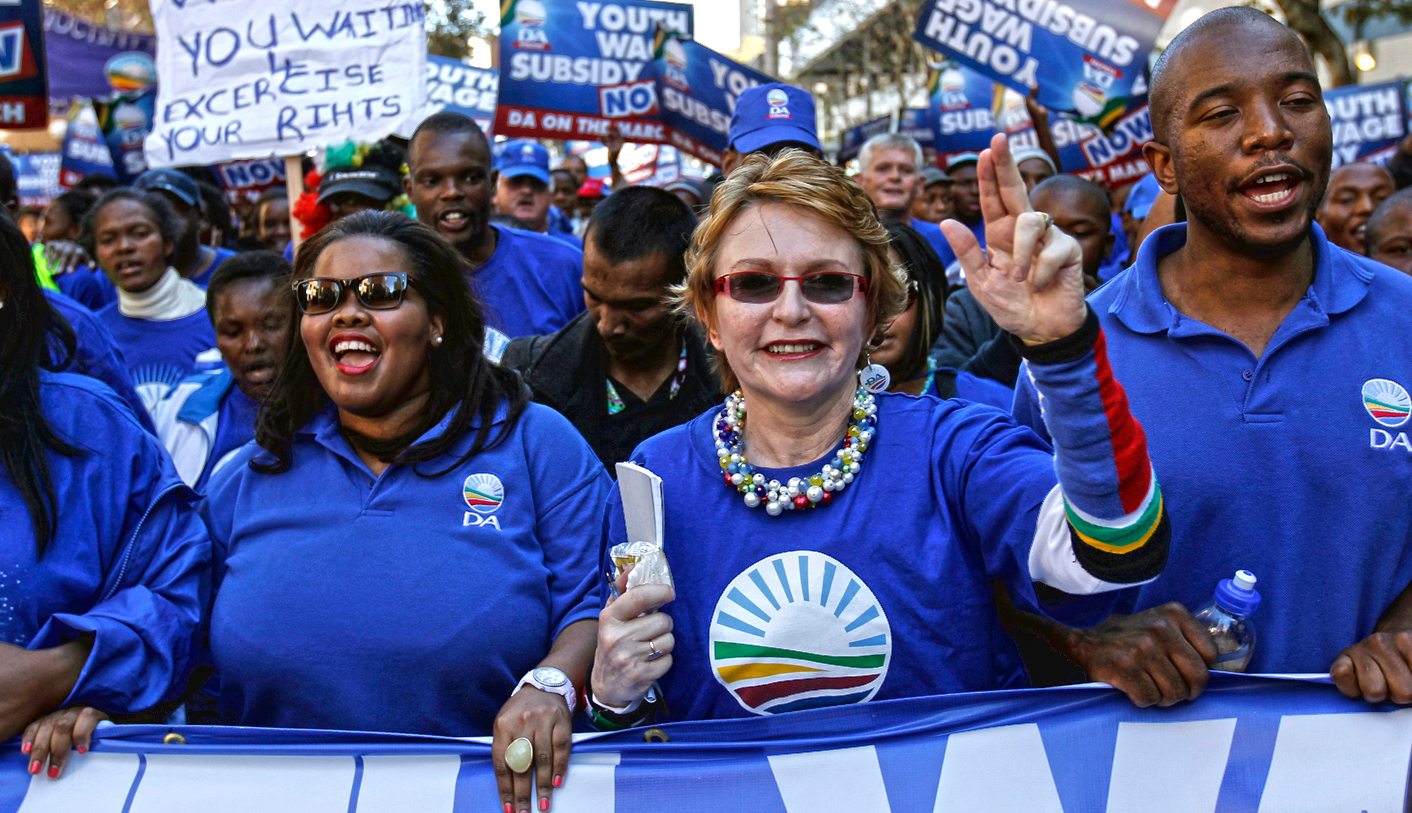 As scandal and evidence of poor leadership mounts against the ANC government, some traditional ANC voters might be looking elsewhere to cast their vote in 2014. The Democratic Alliance is hoping to draw a large portion of the disgruntled and disillusioned vote from the ANC. But the DA has its own ideological and identity battles, and appears unsure about the direction in which the strategy of being everything to everyone might take the party. By RANJENI MUNUSAMY.

An odd public debate among senior Democratic Alliance (DA) members occurred this week. Normally the DA is like the movie The Stepford Wives: nobody quite knows what goes on behind closed doors but the leaders always appear outside, overly polished and smiling. Senior members rarely challenge or contradict each other out in the open.

The DA’s former director of political analysis and development, Gareth van Onselen, took issue with a piece on Africanness in the Sunday Times by the party’s national spokesman, Mmusi Maimane. The piece was written in reaction to the ANC’s attack on the DA’s parliamentary leader Lindiwe Mazibuko, in which the ruling party claimed that her condemnation of President Jacob Zuma was due to her naiveté about African traditions.

Maimane claimed politicians are increasingly using their Africanness as a political shield and this misrepresented what it is to be African.

“Africanness is defined by one’s commitment to the issues and lives of the African people. And nothing can better measure that Africanness than one’s commitment to the spirit of ubuntu. When the government – or a president – is corrupt and steals money from the collective wellbeing of our people, it violates the principles of ubuntu. Corruption is therefore anathema to the spirit of ubuntu and Africanness,” Maimane wrote.

Van Onselen, who quit his position as a senior strategist in the DA and now runs a political blog to promote liberal thought, questioned whether Maimane’s views was not eroding the liberal values on which the DA hangs its ideology.

“At various key points it is contradictory and, while seemingly consistent with Maimane’s personal views on the subject of “Africanness” (he was speaking as the DA’s national spokesperson so, one must assume, on behalf of the party), there are inherent to it a number of ideas which are profoundly illiberal. The article is, perhaps, illustrative of a certain vein of politically correct but ideologically incompatible rhetoric starting to creep into the DA’s language,” Van Onselen wrote.

Presumably he did not leave the DA on the best of terms then. But his 2,949-word dispatch in response to Maimane provides a rare glimpse into the internal convulsions of the DA as it tries to position itself as a government-in-waiting after the ANC self-destructs. Van Onselen’s views are representative of a portion of the DA’s traditional constituency which is increasingly concerned by the progressive extreme makeover of the party to make it friendlier to the black middle class.

There is clearly a debate in the DA as to whether it maintains its primary liberal identity or shifts towards an ideological hodge-podge incorporating populist and even socialist ideas. The party’s strategists have realised that there is no way of growing the party in large numbers and beyond its traditional constituency without lending itself to black African identity. Without any firm ideological grounding to its metamorphosis, the DA has to borrow philosophies like Africanness and ubuntu to appeal to its target audience.

The other big drive in the DA is to attract high-profile African leaders, preferably notable names in the liberation struggle, who could help change the party’s identity as a white party looking after white and business interests. Prior to the DA’s elective conference in November last year, rumours again mounted that prominent academic and businesswoman Mamphela Ramphele would be joining the party and would take over the reins from Helen Zille. The rumour never materialised and Zille was re-elected unopposed, but party deep-throats insist it is a matter of time before it happens.

Apart from being a respected figure in South African society, Ramphele happens to be one of the founders of the Black Consciousness Movement (BCM) and is also a strong advocate of ubuntu. Her BCM background is directly at odds with the DA’s principles, but her outspoken criticism of the ANC and standing in society overrides the contradictions.

Van Onselen argues that the DA’s liberal values are being drowned in its transition to the South African party of the future.

“You have to search hard these days to find the word ‘liberal’ in any DA communication. Certainly the party engages far more in accommodating and indulging ideas like ubuntu, ‘Africanness’ and a single common identity than it used to. And so these sorts of questions are going to be become far more commonplace as it seeks to grow. Where do the DA’s foundational values start and stop? Or is the DA going to become only the latest person on the politically correct soapbox, trying to advocate for and define those illiberal ideas about which the ANC and its alliance partners spend so much time trying to legislate for already,” he says in his riposte to Maimane.

He also quotes from an article by former DA strategist Ryan Coetzee which stated: “[The DA] runs a great risk by pandering to group identity, as opposed to promoting the right of individuals to self-identify with groups. Because when we do that we divide people in a way that sets them up as antagonists, and we deny their individuality and agency, and so trample their dignity.

“And so we must embrace the legitimacy and importance of group identities, but we must not embrace ‘identity politics’ which reduces people, whether implicitly or explicitly, to mere representatives of groups and seeks to advance or retard advancement on this basis.”

But the DA’s communications director, Gavin Davis, has written a public response to Van Onselen’s missive, warning that: “We must guard against self-appointed custodians of liberalism unilaterally deciding what liberalism is and what it isn’t, and who is in and who is out. If we do not, you can be sure that authoritarianism will follow suit.”

Davis also contests Van Onselen’s argument that there is no such thing as Ubuntu and, if there was, it would be anathema to liberalism.

“It is true that the concept of ubuntu is ill-defined. But, because of this, it is difficult to ascertain whether it is compatible with liberalism or not. Since both concepts are open to contestation (even if liberalism is far better defined), it is feasible for a person to self-identify as a liberal who believes in ubuntu,” said Davis.

He said terms like Africanness, liberalism could not be defined and prescribed by any one individual and were not static. “Liberalism is constantly evolving, particularly as it is applied in new contexts on our continent and across the world,” said Davis.

As the DA seeks to grow and break into traditional ANC constituencies, these debates will no doubt abound – though probably not always in public. But although these might be important issues for the party leadership and strategists, the debates will have little resonance on the ground.

If the DA really wants to expand and threaten the ANC’s dominance, it needs to aim for the grassroots where disgruntlement is most evident and leadership is most needed. It needs leaders who can stand in front of the people of Zamdela and Marikana, understand their pain and frustration, and win their confidence to represent their grievances.

The DA cannot become a black party by introducing black leaders into its ranks or infusing new concepts into its ideology. The DA needs to be present in the daily struggles of those who live and work in South Africa. If it wants to someday represent the majority of the country’s people, occasional visits and roadshows in townships, informal settlements and rural areas will not achieve that goal. Loyalty to the ANC is complex, runs deep and is difficult to severe.

The primary source of the ANC’s disconnect from its constituency is the broken link to local communities, mostly through its leaders leaving them behind as they attained power and resources. If the DA wants to connect to those communities, it cannot relate to them artificially through high-level philosophies. It must draw in local leaders and speak directly to their needs. That requires new thinking and, possibly, a whole new leadership core. DM