In Harmony’s church of uncertainty 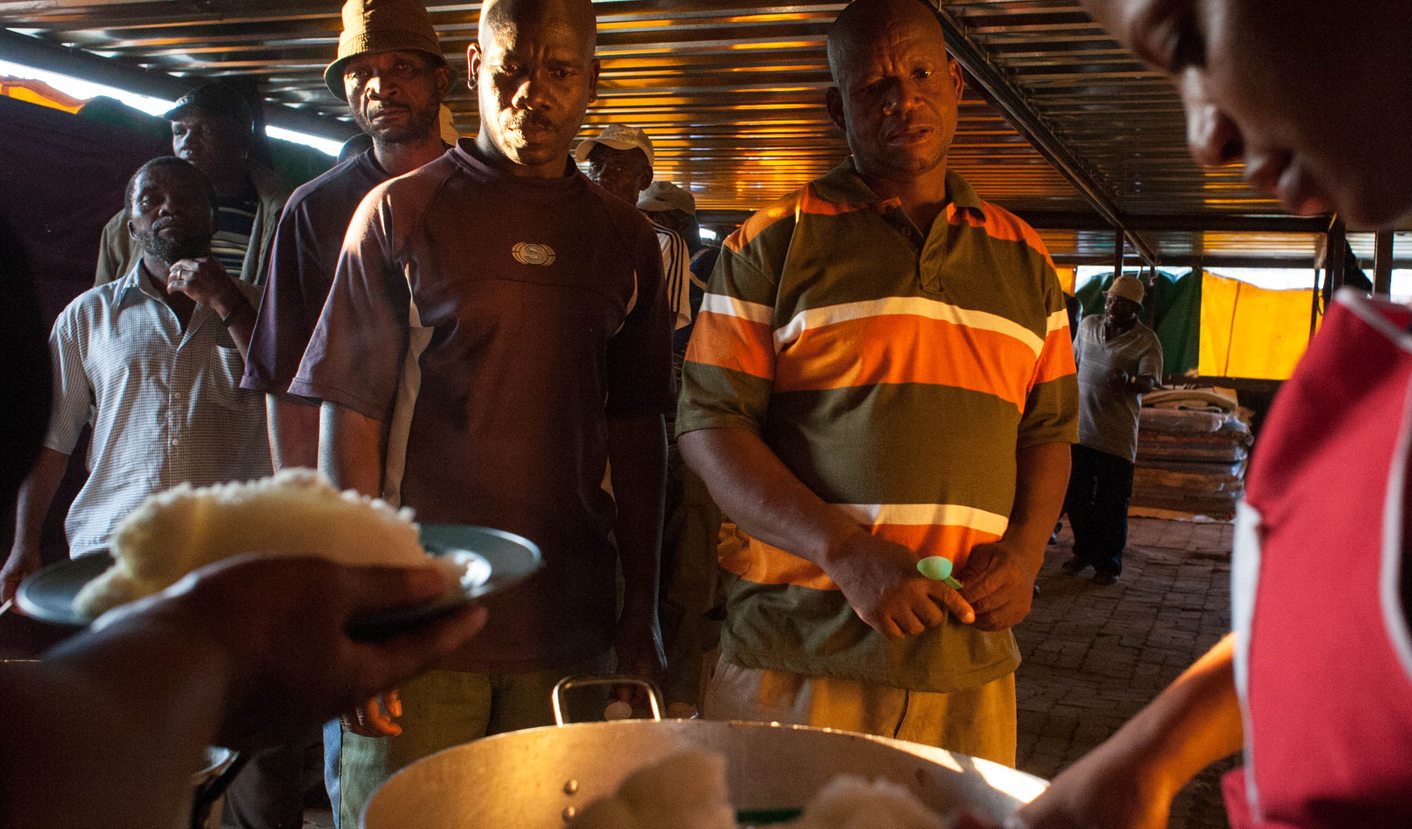 For more than three weeks now, employees at Harmony Gold’s Kusasalethu mine in Carletonville have been stranded after they returned from their homes across Southern Africa to a closed mine and locked hostels. GREG NICOLSON visits them and observes the utter depression of their uncertain state.

Five men sit on rocks under a tree. They look across the open yard to the shed where they have been sleeping. A tarpaulin hangs as one wall of the makeshift room. A trench has been dug around it after the weekend’s rains made sleep impossible. A Marvin Gaye song plays in a nearby house. Eight men lie on the grass under the shade of an acacia tree. A bird calls. Another returns the call. A beetle climbs a rock the size of a fist, then it descends.

In their boredom, most of the men just looked in different directions, occasionally chatting, and waited. Since they returned from their Christmas break on 2 January, hundreds of miners at Harmony Gold’s Kusasalethu mine have been homeless. Management suspended operations at the mine after strikes last year were marred by murder, underground sit-ins, vandalism, and violence. “Most importantly, it was unsafe for the mine to continue to operate,” said Harmony CEO Graham Briggs in an open letter advising stakeholders of the suspended operations. Photo: Sondi Xhego, 42, lies on the pile of blankets which are stacked each morning in the church where some of Harmony Gold employees have taken refuge. The father of three is from Mthatha and while he waits for Harmony to welcome its workers back to the Kusasalethu mine he worries about what may happen to his job. Greg Nicolson/Daily Maverick.

The workers staying at St Benedicts Roman Catholic Church in Wedela say they didn’t know the mine wouldn’t be operating until they arrived to a locked gate on 2 January. They left to see their families in December, taking a R500 cash advance, like they do most years, and returned for work. Some of the 6,000 people employed through the Kusasalethu mine have been staying in their homes in Wedela. Others live in, or have family or friends, in nearby Carletonville. However, some of those who stayed on site in the hostels, had nowhere to go.

Some of them tell of how they were allowed one trip back to their rooms with a security guard to collect their belongings. Others say they didn’t get the chance and their possessions remain on site. For days they all camped outside the mine gates until rain finally drove them to the church. The Democratic Socialist Movement (DSM) and the Association of Mineworkers and Construction Union (Amcu) helped them secure shelter. The rain gets in there too, but at least it has a roof. Photo: A group of Harmony Gold employees take shelter from the sun under tree. The makeshift room where they are staying gets sweltering hot during the day so some of the stranded men sit under trees in the yards of their colleagues and other locals who were not affected by the hostel lockout. Greg Nicolson/Daily Maverick

Harmony says it wants to keep the mine open. “Kusasalethu is a mine that is worth saving. Together, employees and management at the mine have delivered enormous success in recent years. This mine has significant reserves to operate until 2038 (25 years from now). We need to find a solution to continue mining this great asset,” wrote Briggs. He wants to be sure workers will behave if they return.

Harmony has begun the mandatory consultation process with the National Union of Mineworkers (NUM), Amcu, the Union Association of South Africa (Uasa) and Solidarity, stipulated under Section 189 of the Labour Relations Act, to discuss the mine’s closure. It’s also talking to the unions about how it can ensure a safe working place. There are about 45 days in which to discuss the issue. Workers believe they are being paid their basic wage (without the opportunity for overtime) in the interim. Photo: A Harmony employee stands in the yard of the St. Benedicts Roman Catholic Church in Wedala. Those waiting to go back to the hostels and their jobs have little to occupy their time. They wash their clothes, walk the small township, and talk to each other. Greg Nicolson/Daily Maverick.

While 6,000 jobs are at risk, the Daily Maverick saw about 80 people stranded at the church, of a total of 1,800 hostel residents. Amcu took Harmony to the South Gauteng High Court on Wednesday in an urgent application for workers to get access to the hostels. Amcu’s representative said the workers have no place else to go. Harmony called the union’s application a publicity stunt.

Those stranded at the church are hopeful they will soon get back into the hostels where they have cooking facilities, toilets, beds, and showers – none of which are available to them now. The DSM had scheduled a march against the mine’s closure for Thursday but postponed it after not receiving the necessary permit. Now, the movement is talking of marching regardless, which could further raise the temperature. Photo: Harmony Gold employees from the Kusasalethu mine eat dinner in the yard of the St. Benedicts Roman Catholic Church in Wedela. Greg Nicolson/Daily Maverick

The stranded Harmony workers are more muted in their response. They remain hopeful they can work and provide for their families. These are the men of the mines. From across Southern Africa, they came to work underground. They came as men have come since prospectors found they could make money from digging the soil. They wear simple clothes: jeans, T-shirts, sandals. Even the bodies of the oldest men are firm. Their eyes speak of toil and they prefer to hold their tongues or joke rather than discuss their situation.

On the roadside, with the music playing from an Amcu member’s bakkie, a few Harmony and Amcu T-shirts are the only things separating them from looking like the unemployed. That’s the fate they fear. While they contemplate the idea, they can only wait. DM

Main photo: Workers wait to be served dinner in a room of the church where they have been eating and sleeping. Some of the female employees from the Kusasalethu mine and mothers in the area help prepare breakfast and dinner for the stranded Harmony employees. Photo: Greg Nicolson/Daily Maverick.