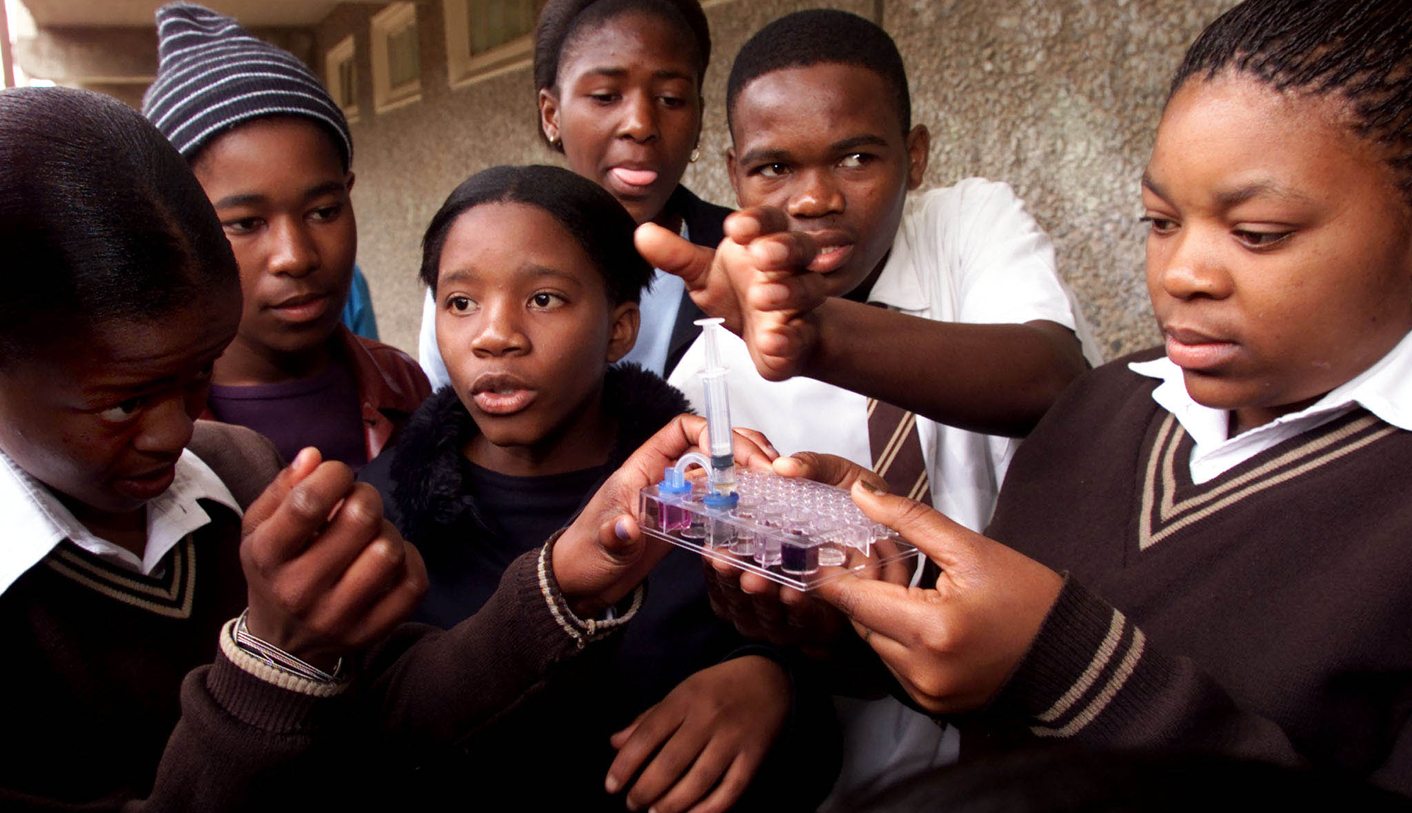 Hundreds of thousands of learners have exited the school system and are now trying to enter the job market with their Matric certificates in their hands. For most, their chances of employment are bedevilled by functional illiteracy and innumeracy. Despite this, the Minister of Basic Education, Angie Motshekga, wants us to believe that the education system is improving. By MANDY DE WAAL.

In the heaving centre of downtown Johannesburg, you’ll find a steady stream of youths entering a shop front in the hope of converting their newly earned Matric certificates into another currency. They’re flocking into a recruitment-cum-filtering business called Lulaway that services mass market employers like supermarkets, fast food companies, or security firms. But for every ten people that walk through the door, only two may be eligible for a job. Despite boasting a Matric pass, many are functionally innumerate or illiterate, and will likely be locked out of the employment market.

“Lulaway has a network of 25 screening centres in Gauteng where job hunters come in looking for work. As part of our filtering system, we also conduct basic literacy and numeracy tests as part of our service to big companies like KFC. The tests are very basic but the pass rate we get is extremely low. About 80% of all the people we interview can’t pass these tests. They fail, which means that we can’t help them find a job,” says Errol Freeman, MD of Lulaway, adding: “We put these people on our system, but their real chance of making any impact in the working world is very slim.”

“We see about 250 people a day, and at any given time we are trying to fill 350 to 500 jobs, but once we sit people down to test them we are shocked. The people who come into our recruitment stores are well groomed and dressed, present reasonably well verbally, but struggle with basic numeracy and literacy. In some instances we find Matric leavers with English levels that are comparable to that of a Grade 1 or 2,” Freeman adds.

A total of 527,335 full-time learners sat and wrote Matric last year, in the hope of getting their National Senior Certificate. Only those who made the grade qualify to enter Freeman’s recruitment system. “If you haven’t got a Matric you unfortunately don’t stand much of a chance of getting employed. For us, Matric is the minimum prerequisite for a basic job. It sounds a bit callous, but we’re a filter system. We’re not councillors; that’s not our business. If you don’t have Matric, or if you aren’t basically literate or numerate, we can’t help you.”

What Freeman’s talking about is an established and commonly accepted issue in South Africa. This country invests heavily in education but when compared to other countries our education outcomes are amongst the worst. It is an undisputed fact that our education system is simply not up to scratch.

But that’s changing – or so says the Minister of Basic Education, Angie Motshekga. Motshekga had much to prove when she announced the Class of 2012’s Matric results  a couple of weeks ago. Minutes before she released the results, Motshekga declared: “Our national strategy for improving literacy and numeracy has assisted in improving education quality.”

But can we trust the minister when she tells us that the education system is improving and that she’s got the data to back this up?

But Motshekga didn’t just rely on the Matric results to buoy her claim that her department’s national strategy was achieving results. She recalled the results of the Annual National Assessments (ANAs), which tests some seven million learners yearly. These assessments –in their second year in 2012 – reportedly showed some improvement too, particularly in Grade 3 literacy and numeracy.

But don’t be fooled. Despite this ostensibly ‘empirical’ data, education experts say there’s no cause to celebrate. They say Motshekga’s claim is fraught, if not flawed, and here’s why.

Measuring the quality of national education is notoriously complex and challenging, and when you start interrogating the data Motshekga used to assert improvements, the veracity of her claims collapses like a house of cards.

Using Matric results as a barometer for improvement is problematic because it only tracks those learners who actually write the exams, and not those who have dropped out. “The Matric pass rate is calculated as a percentage of students that are enrolled in Grade 12,” says Nicholas Spaull, a researcher in Stellenbosch University’s economics department who focuses on primary schooling in SA and Africa.

“Most drop-out takes place between Grade 10 and Grade 12. The students are pushed through the system until grade 10, and then schools realise that if they put these kids through, they are not going to pass Grade 12. The evidence suggests that the problems are rooted in primary school, but because there are no Matric-type exams in primary school, they proceed to higher grades. Getting low pass rates in Matric is problematic for schools, so they weed out these students. If you only look at half of a cohort – those reaching Matric – to see if the quality of education is improving or deteriorating over time, there is no indication of how the other 50% is doing,” adds Spaull.

The other half who are pushed out of the system make up the alarming statistics that are SA’s unemployed youth. Another worry is that schools that see learners struggling with Matric are also inclined to push these students into studying part-time. Part-time learners aren’t accounted for in the Grade 12 results.

Then there’s the matter of the glaring disparity in SA’s education system. “We basically have two school systems, and it is a misnomer to talk about one school system,” says Spaull, who explains that 20% of schools are largely functional and achieve adequate Matric scores, while the remaining 80% of schools are dysfunctional and get very low scores. These two systems are conflated and the functional schools buoy the results of the mass of dysfunctional schools.

But what about those Annual National Assessments (ANAs) which Motshekga was boasting about? The government lauds them as a useful barometer, but they’re just as problematic as the Matric results.

“We shouldn’t be using the annual results of 2011 and 2012 (ANAs) because they are not comparable,” says Spaull. “It appears that the 2012 tests were much easier than the 2011 ones, and we have a number of methodological concerns about the construction of the tests” he states.

Brahm Fleisch, of Wits’ Educational Leadership and Policy Studies centre, concurs that the ANAs can’t currently be used to get any real reflection of education quality. “There was an improvement between 2011 and 2012, but the tests were not comparable in that they were not done [during] the same periods,” says Fleisch, who adds that these assessment tests were done at different times of the year, which pretty much makes it like comparing apples with pears.

“The ANAs were supposed to have started in 2010, but the administration of the test never started in time, and so it was first done in February 2011. There clearly was improvement between 2011 and 2012, but can we really make claims on the basis of these tests? I would suspect that one would need to be cautious. The 2011 test was done in February, whereas the 2012 assessment was done in September. That’s obviously a huge difference because there are substantial gains made by kids in that number of months. To make claims about improvements about tests that were made at different times of the year must be done with great caution,” warns Fleisch.

Another ANAs issue is that the sample is so small one cannot distinguish a trend. “There is marginal improvement, but we are still waiting for the robust data to support it. A lot more work needs to be done before we can make a claim like the minister has done with some level of certainty. We need to wait until we have got more than just infinitesimal data.”

Because the ANAs are in their infancy, says Doron, there is the additional difficulty of teething problems. “The marking of the script is not nationally moderated. It is not done the way the Matric marking is done, which is standardised. Even if these problems didn’t exist you can’t draw conclusions from just one year – you have to wait for a trend to develop. We shouldn’t expect improvements to happen rapidly anyway,” he says.

“The department undermined their own technical credibility by publishing the 2012 ANA results in spite of major objections, even in the face of criticism by people on their own committee,” says Spaull. “A third of Grade 6 students are functionally illiterate, they cannot read a simple paragraph and extract meaning from it. Forty percent of Grade 6 students are functionally innumerate,” he adds, quoting from independent and international assessments, in which SA was included. “I can go on for ages about the shocking statistics emerging from many local and international assessments. The pieces of evidence together reveal the predicament we are in – there is an ongoing crisis in the quality of education in South Africa, yet few people are willing to treat it as such.”

From their side, Africa Check investigated the plausibility of Motshekga’s claim (“Our national strategy for improving literacy and numeracy has assisted in improving education quality”), only to find it was flawed and misleading. The education system is still failing this nation, and any claims to the contrary, based on the Matric results and the ANAs, are unfounded.

Back in Plein Street, Johannesburg, well-dressed young people who come from households where at least one parent has a job, come looking for jobs. They are aged between 18 and 24, and the Matric certificate that should help them gain entry to the employment market doesn’t mean much.

“The sad reality is that the chances these youngsters who have passed Matric, but who are functionally illiterate and innumerate, will ever get employed is very low. Statistics and our experience show that if learners don’t get employed during their first few years of leaving school, their chances of getting jobs later decline dramatically. As the years pass their opportunity of entering the work world just get lower and lower,” says Lulaway’s Freeman.

“There are jobs, but employers are looking for potential, and not being functionally literate or numerate disables job hunters from showing their potential. Numeracy and literacy is a massive problem. It’s horrifying to see the real levels, but it is something I witness first-hand every day.”

Education and unemployment are South Africa’s Catch-22. They’re twin dilemmas that are inextricably linked. And we have no hope of solving the unemployment crisis without making a very real and measurable advance in education. DM