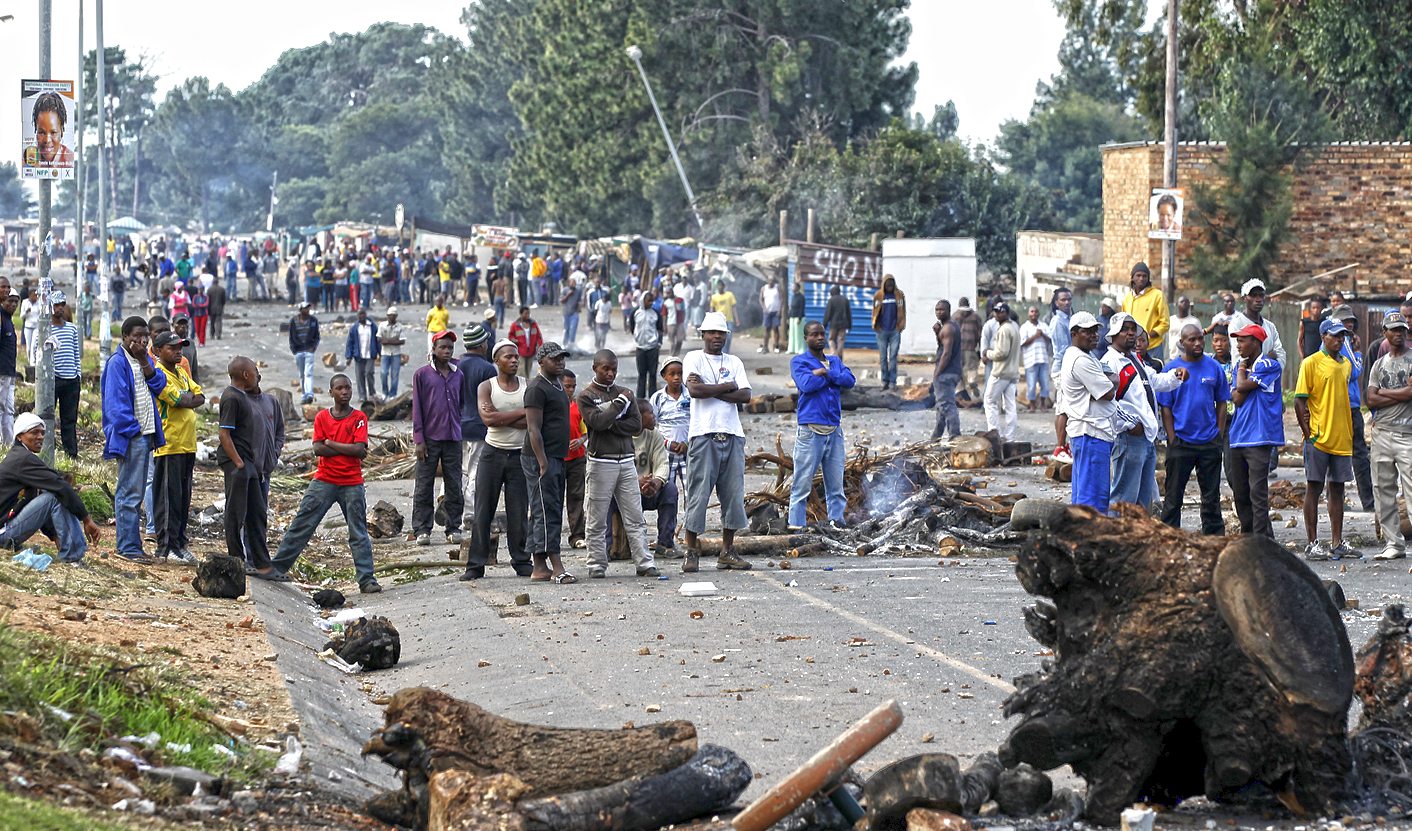 There was a time when South Africa’s negotiated political settlement and transition to democracy was a source of great pride and conflict zones around the world wanted to emulate our example of dialogue and forgiveness. That miracle is a distant memory. Nobody talks anymore. Violence and bullying are our primary methods of engagement, as was proved this week by the community rebellion in Sasolburg, the ANC’s handling of the controversial FNB advertisement and anyone else who dared step out of the prescribed line. By RANJENI MUNUSAMY.

In 2006, the township of Khutsong on the West Rand erupted in violence after the community rebelled against the area being incorporated into the North West province from Gauteng. The community rioted, blocked roads, petrol bombed people’s houses, destroyed municipal buildings, interrupted schooling and eventually resorted to court action to stop the Merafong municipality, which incorporates Khutsong, from being demarcated as part of the North West.

The community did so because the North West is poorer and has a bad track record of service delivery. The community wanted to remain in the better-resourced Gauteng as they believed they would have a better chance of accessing basic services. It was a desperate cry for help, expressed violently and in a self-defeating manner. Stopping children from going to school and destroying municipal buildings was, of course, further setting back the development of that community. But they thought there was no other way of getting their voices heard.

It worked, eventually. Almost three years after the riots began, government gave in and altered the Constitution so that the Merafong municipality was reincorporated into Gauteng.

The events at Khutsong set a dangerous precedent for how disgruntled, angry communities can get their way, particularly in an environment in which their elected representatives constantly turn a deaf ear to their cries and are disconnected from their constituency. Throughout the country, there are periodic violent upheavals and protest action as desperate and disgruntled people demand services, better wages or rebel against those in authority.

As members of the political elite enrich themselves at the trough of state resources and hide behind higher security walls, their ability to connect with those who elect them becomes progressively diminished. The more they submerge themselves in extravagance and become convinced of their superior status, the less they care about the communities drowning in poverty and frustration.

So from Marikana to De Doorns, ordinary people are resorting to extreme forms of violence and turn on anything and anyone vulnerable to draw attention to their grievances. The Free State town of Sasolburg is the latest area to be besieged by violent protests following a rebellion by the community at Zamdela township against a merger between the Sasolburg municipality, under which it currently falls, with the municipality of Parys. They believe the merger would lead to less service delivery and more corruption.

Of course, this is a symptom of a bigger problem of poor local government functionality and corruption, which is turning service delivery into a farce. The government and the ANC are patently aware of this, but watch from a distance as the streets are turned into battlefields.

The heroes of yesteryear are no longer willing, or able, personally communicate and negotiate with aggrieved communities. Though ANC leaders guided South Africa’s negotiated settlement by talking to the Apartheid enemy, they now ignore the pain and frustration of their own people.

As seen in Marikana, De Doorns and Sasolburg, the police are in most cases the government’s interface with communities, but are unable to contain and control the community anger, and end up aggravating the situation.

As history has shown repeatedly, violence begets violence. The communities’ bullying tactics are met with heavy-handed action from the police. Blood and tears are all too prevalent in our country as a result.

Sometimes the violence produces dividends, as it did in Marikana when rock drill operators received a salary increase to halt the wildcat strike. On Tuesday, Co-operative Governance and Traditional Affairs Minister Richard Baloyi announced that in the wake of the violence at Zamdela, the municipal merger had been stopped. Sometimes the communities get fatigued and suspend the riots until something triggers them off again. Sometimes the targets of the violence are sucked into the vortex of anger despite having nothing to do with those in authority.

In De Doorns and in Sasolburg, journalists have been targets of people’s rage, although they are there to tell the story of the frustrations and desperation of those communities. Mobs channel their anger onto whomever they can because they cannot reach those who could and should be listening to them.

But bullying is not restricted to mobs in townships and frustrated workers. There is another, sophisticated method of bullying which the ANC has prototyped to force detractors into submission. Over the years, ANC leaders have taken to publicly mocking and scorning those who differ with them on issues such as Aids treatment, crime, corruption and foreign policy.

Last year’s debacle over Brett Murray’s painting, The Spear, however, took the chauvinism and intolerance to a new low when the ANC and its allies bullied the City Press and the Goodman Gallery into removing the artwork from public view. Earlier this month, the ANC tried a similar tactic when it attacked Democratic Alliance parliamentary leader Lindiwe Mazibuko for questioning President Jacob Zuma’s suggestion to business leaders that they would be rewarded for supporting the ANC.

ANC spokesman Jackson Mthembu’s response was that Mazibuko’s criticism stemmed from her ignorance and naiveté about African traditions, claiming: “It is our tradition as Africans that if someone gives you something, in return you thank him/her and wish them prosperity and abundance.” Such a statement makes intellectual engagement on the issues impossible because it is intended to bully and belittle Mazibuko.

This week, the ANC employed the strategy again to bully First National Bank to withdraw television advertisements, which formed part of the bank’s “You Can Help” campaign. The videos featured young people speaking critically about the problems facing South Africa, including education, poverty, corruption and unemployment.

The ANC, supported by its women’s and youth league, as well as its ally the South African Communist Party (SACP), claimed the bank was running a “political” and “treasonous” campaign against the government. The SACP claimed the adverts were an agitation for “regime change” and that FNB was using children “as mercenaries in their war against government”. With such a volley of astounding allegations, the bank immediately buckled under pressure and canned many of the videos.

Although none of the statements made by the young people in the videos were false, for the bank to continue running the adverts would be foolhardy and, from a business perspective, suicidal. FNB cannot afford to have an antagonistic relationship with the ruling party if it intends operating successfully in South Africa.

Bullying is the new South African way. Nobody negotiates any longer. Dialogue is no longer the unique and miraculous South African formula for settling conflict, despite us exporting it to Ireland, the Great Lakes and Sudan to help negotiate resolutions in those countries.

It is inevitable that at some point, the leadership bullying and the community violence and anger will coincide. When that time comes, the consequences will be horrid. Marikana was a taste of what could happen in the event of this collision. On a bigger scale, our country will be terrifying for anyone. DM

Photo: Township residents stand near barricades during protests over the lack of housing, electricity and sanitary water supplies in Zandspruit, north of Johannesburg April 26, 2011. Police used rubber bullets to disperse the crowd and 16 people were arrested for public violence, according to local media reports. REUTERS/Siphiwe Sibeko