Farmworkers’ strike may be over – but everyone’s a loser 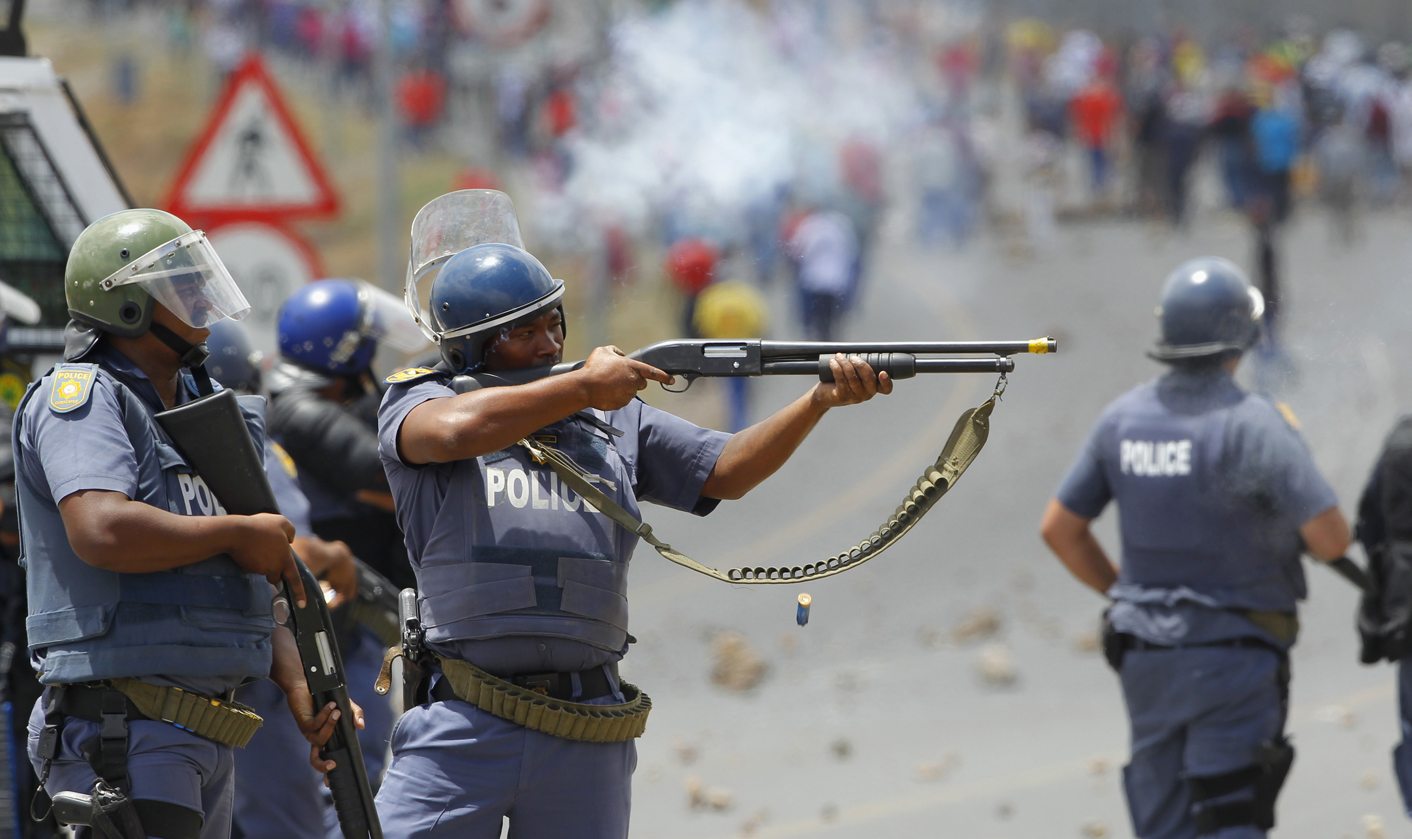 Cosatu says the Western Cape farmworkers’ strike is over. The consistently more militant union Bawusa appears to agree – albeit seemingly more reluctantly. Cosatu trumpets that the protest action has changed SA farming forever. But has anyone really won? REBECCA DAVIS tallies up the casualties of the last few months’ labour dispute.

Last Wednesday Cosatu said that the Western Cape farmworkers’ strike would be suspended for a week to give negotiations a chance, and to improve relations with farmers. With little evidence that much progress has been made in talks between farmers and workers, the strike should theoretically have begun again this Wednesday. But on Tuesday Cosatu announced that the strike was over. In a press statement on the matter, the trade union body explained that their motivations for calling off the strike were twofold: because striking workers needed to return to work to earn money to buy food, and because the strike was harming South African agriculture.

“We understand that even though the anger of workers makes them want to continue the strike, we have to consider the impact on children when there is no food in the house,” the statement read. “We are also mindful of the fact that these industries belong to the people of South Africa, and while we want to ruin bad farmers, we don’t want to ruin our industries.”

Cosatu presented the strike action of November 2012 and January 2013 as successful, however.  “The disputes, strikes and protests in the Western Cape farming communities have changed the face of agriculture forever,” they claimed.

In truth, while the action has certainly succeeded in drawing the eye of the world on to conditions on Cape farms, it’s hard to make a claim for such unequivocal success. The minimum wage for farmworkers will certainly rise from its current R69, but the unions have not succeeded in securing any firm commitment as to the level of the raise. It is virtually certain that the sectoral determination will not rise anywhere near to the R150 demanded, yet in communities like De Doorns, the figure of R150 is still invoked as the magic number.  When Labour Minister Mildred Oliphant announces the actual raise, at the start of March, she is likely to be met with much disappointment. Not, perhaps, by the union top dogs – but by the farmworkers on the ground who believed (and were led to believe) that R150 was a plausible target.

Nobody has emerged from the farmworkers’ strike smelling like roses. Farmers’ union Agri SA has come across as intransigent and remote, blind to the everyday realities of farmworker poverty. Cosatu has at various points revealed itself to be out of step with the demands of the actual workers, only a fraction of whom are actually unionised. Cosatu’s reluctance to point fingers at the Labour Ministry’s role in setting the sectoral minimum wage in the first place has been disingenuous, at best. Bawusa, the Bawsi Agricultural Workers Union of SA, has been compromised by rumours swirling about the character and motivations of its general secretary, Nosey Pieterse. Allegations that workers have been intimidated into staying away from work have also reflected poorly on strike leaders.

Politicians on either side of the spectrum have also been less than helpful. The mudslinging between the DA and the ANC, as to whose mess this was to clean up, served no purpose other than to make both parties look petty, self-serving, and critically low on empathy. Western Cape Premier Helen Zille has said and done little to refute the widespread perception among farmworkers that the DA is in cahoots with the farmers. The DA – and some farmers – may continue to mutter their claim that the protests were engineered by the ANC to destabilise the province. Nobody can dispute the fact that there is genuine anger among farmworkers about their salary and living conditions, however, and nobody can dispute the fact that a salary of R69 a day is ample cause for dissatisfaction.

But if the ANC thinks they got out of this scot-free, they are mistaken. The Daily Maverick spoke to numerous workers throughout the dispute who continually bemoaned the apparent indifference of President Jacob Zuma, and were perfectly aware of the role of the Labour Ministry in setting wages. I was earnestly entreated by a De Doorns man to give him Zuma’s personal cellphone number so that he could ring Zuma up and ask him to come to De Doorns to see what life was like there.

The South African police force has emerged looking trigger-happy and sometimes brutal, a mere six months after Marikana created that perception in the eyes of many. Three people have been killed and farmworkers all over the Western Cape bear the injuries of alleged beatings and rubber bullets. So, too, do some of their children. Reports of police storming into informal settlements at night to root out “trouble-makers” has left communities skittish, fragile and in some cases downright brutalised. When you spend time in the informal settlements of the affected areas it is clear that people have been left terrified. The mere sound of an approaching police van is enough to send many scuttling for cover. What the long-term implications of this are likely to be, in terms of community relations with police, is anyone’s guess – but it’s probably not positive.

Farmers have been lying low, so in some ways they have been curiously absent from, particularly, January’s action – at least in the eyes of the media. Many consider themselves to be unfairly tarnished by the actions of a few bad seeds. It is clear that there are some Western Cape farmers who treat their staff decently; these are also the only farmers who have been willing to speak to the media during this time. Nonetheless, there are few reports of the much-vaunted farm-by-farm negotiations between farmers and workers succeeding, and rumours have persisted of collusion between police and farmers and the intimidation of workers who have attempted to strike.

The protestors themselves have at certain points done themselves no favours either. Burning vineyards and packsheds was a sure-fire way to win the attention of politicians and journalists, but on the affected farms the result will be job losses for those who desperately need work. This is doubly poignant if those who carried out the criminal activities were not farmworkers, as has been claimed. Turning on the media in De Doorns was a quick route to losing public sympathy for their plight, as was the looting and stoning which happened elsewhere. The fact that public health facilities had to be closed because of concerns for the safety of medical staff also meant that rural people who needed vital ARVs and TB medication couldn’t receive them.

The media may as well take a look at themselves in this as well, and ask some difficult questions: Daily Maverick as much as any publication. Blocking off motorways and burning fields is effective as a protest action because it instantly guarantees media attention. Too often, it takes blazing tyres on a highway to get journalists to step inside the surrounding informal settlements and find out how people live. Then there’s the issue of what effect sustained media scrutiny on protests like these actually has. There is a certain self-fulfilling aspect to the constant media gaze in situations like these: in De Doorns, journalists lined up to wait for violence to erupt in front of them, and erupt it did. Of course, these stories need to be told: but perhaps the focus should be more on the underlying demands than the spectacle of protest itself.

Cosatu says “the mother of all strikes” will take place later this year nationally if South African agriculture doesn’t shape up. There may be more action yet in store for the Western Cape before that: Bawusa’s Nosey Pieterse said on Tuesday night that the union’s next “focus” would be the wine industry during their harvest time, and later, other fruit farmers. There are also rumours that Clanwilliam will see protests on Wednesday, regardless of what Cosatu and Bawusa may say about workers returning to work.

If the unions are right, this strike may be over for most farmworkers for now – but nothing much has been resolved. Three men are dead, millions of rands’ worth of damage has been done, and farmworkers will continue to receive very low pay, although it may be marginally higher. Awareness about pitiful farmworker salaries has been raised, but farmworkers are far from alone in this plight. At the heart of this messy saga remains a cluster of implacable South African problems – inequality, exploitation, the centuries-old battlefield for control of the land. DM

Photo: Police fire on demonstrators during a strike by farm workers at De Doorns on the N1 highway, linking Cape Town and Johannesburg, January 9, 2013. REUTERS/Mike Hutchings