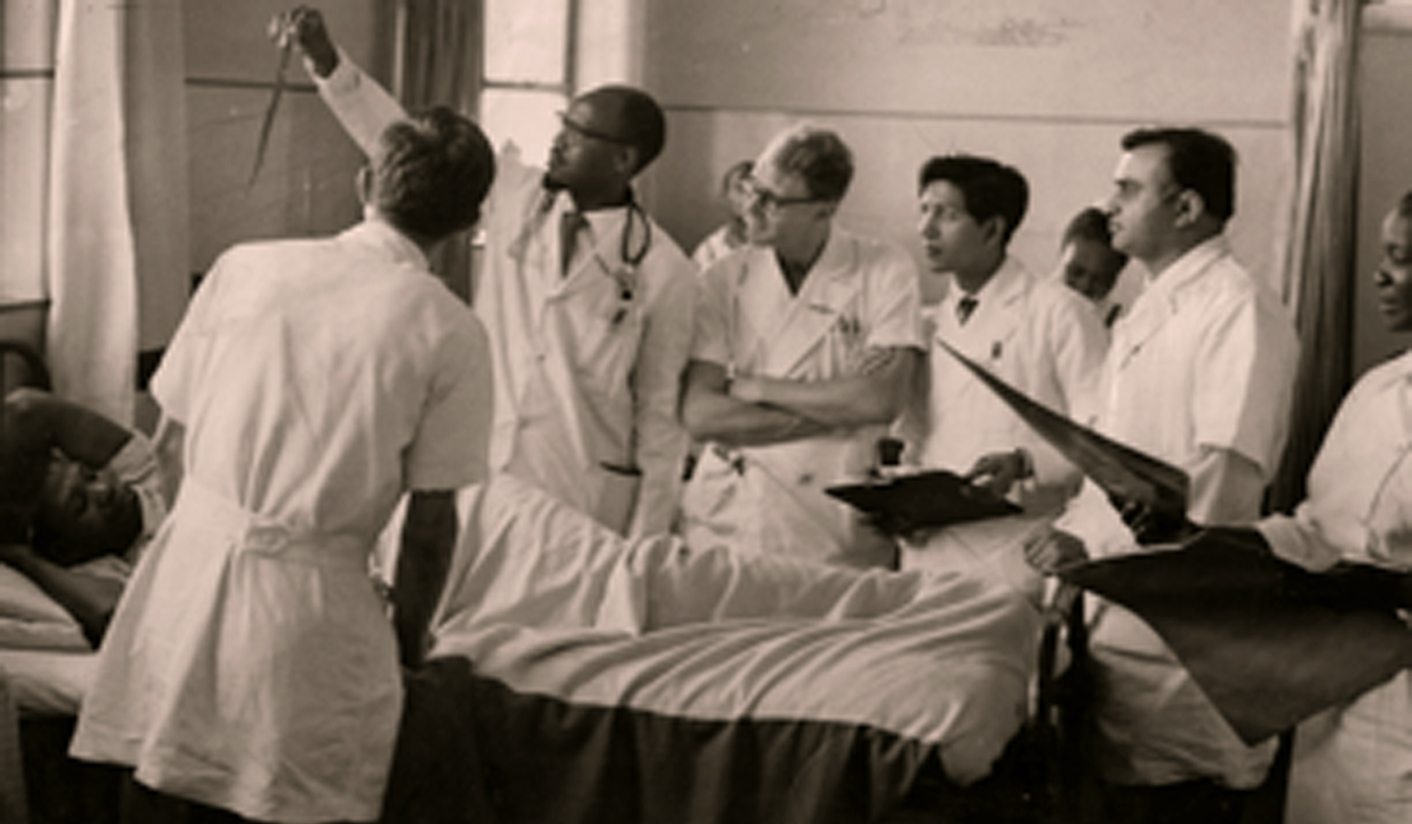 After thwarting several attempts by the Apartheid government to shut down the facility for its defiance of the Group Areas Act, the McCord Hospital in Durban has finally been defeated by money troubles and will be closing its doors in March. By KHADIJA PATEL.

The McCord Hospital in Durban is a 103-year-old institution; home to the country’s biggest HIV care and treatment programme. It is also one of KwaZulu-Natal’s largest hospitals, with 140 beds and 400 staff. Yet it is set to close its doors in March.

Last year, a cutback in international funding forced the hospital to close its HIV/Aids clinic and now, the government is also withholding funds to the semi-private hospital.

In a notice sent to staff last week, the hospital’s chief executive, Kevin Smith, wrote: “McCord has not received notification of an intention to renew this funding. As a result of the loss of this grant funding, McCord loses its licence to operate as a state-aided hospital and cannot afford to continue operating.”

KwaZulu-Natal’s provincial health department spokesman Sam Mkhwanazi told The Mercury that the financial assistance to the hospital (it had received an R89.3-million subsidy from the department last year) had been provided based on a specific business model. This model included an agreement that McCord would provide a service of training medical interns as well as treating HIV patients on behalf of the department, while the department provided laboratory services and medication.

Mkhwanazi said that the hospital had stopped providing these services last year “due to reduction of funding from other sources”, alluding to the US President’s Emergency Plan for AIDS Relief (PEPFAR) programme, of which McCord has been a beneficiary.

South Africa has received almost R25 billion from PEPFAR over the course of 10 years, to support HIV/Aids prevention, care and treatment. Last year, however, the Obama administration announced plans to cut funding for PEPFAR and scale up contributions to the Global Fund to Fight AIDS, tuberculosis and malaria instead.

As a consequence of the proposed changes, the combined funding for both programs has been significantly reduced by about US $220 million, and the Sinikithemba ARV clinic at McCord was forced to close.

Patrick Bond, director for the Centre for Civil Society at the University of KwaZulu-Natal, decried the closure of McCord as an indictment of both the South African and American governments.

“It’s really shocking… it reflects a combination of the absolute insensitivity of first the Obama and then the Zuma administrations,” he said. “Ironically, McCord’s was the highest profile of the AIDS clinics that people like Paul Farmer – a famous Harvard doctor – and Jim Yong Kim, now World Bank President, celebrated here in Durban through their Partners in Health network.”

Faith kaManzi, a young, HIV-positive woman who had been receiving antiretroviral (ARV) therapy at the Sinikithemba clinic, wrote in her column in the Africa Report last August: “My clinic, Sinikithemba in McCord’s, is closing down, and as much as there are local government clinics offering free ARVs, I can never get up at 4am to stand in a queue behind almost a 100 people, risking my life or possible rape by leaving for the clinic in the dark alone as a woman (every 26 seconds, a woman gets raped in South Africa). No thank you!”

And while Faith has resumed taking ARV medication since then, she has grown frail.

“I’m not well, but as far as ARVs are concerned, I decided to go to my local clinic in Cato Manor where I stay,” she said, adding that the HIV clinic she was now visiting was impressively well run.

“I wish all government clinics were run like HIV clinics,” she said.

Faith, who was among the 5,000 HIV patients being treated at the Sinikithemba clinic at McCord, has been transferred successfully to the public health system. Initial concerns that patients could get lost during the transition to other clinics or drop out of treatment and develop drug resistance appear to have been avoided. Public clinics around Durban have reported an influx of McCord patients and Faith herself says she’s met several former McCord patients at the Cato Manor clinic.

At a time of great confusion about the relationship between HIV and Aids and official policies of Aids denialism, McCord was able to draw on networks abroad to secure funding from the US for a landmark ARV programme. The leadership offered by McCord in the South African health services, however, far exceeds the establishment of its ARV clinic.

In their soon-to-be published book on the McCord hospital, ‘And May the Good Work Go on!’ Health Pioneers of KwaZulu-Natal, McCord Hospital, 1909-2009, Julie Parle, Catherine Burns and Vanessa Noble detail the “proud and unique” history of the hospital, popularly known until recently as McCord “Zulu” Hospital. Established as a Christian missionary hospital over a century ago, they point out that McCord Hospital was the only institution in South Africa to survive multiple attempts to remove an institution serving black people from a “white area”.

The story of the hospital’s history is also a narrative of a struggle to establish a hospital “for the Zulu people” in Durban. It is a lesson in the struggle for survival. McCord has faced closure several times previously. Under the Group Areas Act, Hendrik Verwoerd singled out McCord for his particular attention.

In their book, Parle, Burns and Noble dig up a February 1963 Post newspaper front page that asks, “Will McCord’s Die? For it’s the People’s Hospital They Can’t Kick Out”.

The authors say this report illustrates the extent to which McCord Hospital stood in defiance of the Group Areas Act, adding that this was a Durban Hospital that “had proved most racialist theory ALL WRONG”. Political and economic pressure against the hospital was, however, sustained; and by the early 1970s, the hospital faced the choice of closure or being moved to a Bantustan area – and, moreover, to turn away any patients who were not legally classified as Africans.

Yet somehow, through legal ingenuity and the tenacity of its management, the hospital survived. “The best option for me [has been] McCord,” Faith says wistfully.

She has just received treatment for an infection at Addington Hospital – a public hospital in Durban that is also due to be closed soon, albeit temporarily, for repairs. And though she has high praise for the way the public system has evolved to accommodate the roll-out of the ARV programme, she still clings to her preference of McCord. She says, “I know I sound like I feel like I’m better than others because I prefer McCord’s over the public hospital, but it was just much better for me.”

The closure of McCord is set to lead to the dispersal of patients across public healthcare centres in Durban. With the temporary closure of Addington Hospital also looming, a strain on already burdened public hospitals can well be anticipated. “We cannot have a situation where Addington is collapsing and McCord is closing at the same time. Who is going to absorb the crisis? McCord needs to stay open while Addington’s problems are attended to,” the South African Medical Association’s coastal branch president, Jacob Mphatswe, told The Mercury.

Last year, a study by Patient First – an organisation that engages citizens to monitor and track the compliance to core standards in 22 public hospitals in KZN – revealed that, while the patient queues have slightly improved in most of the public hospitals, the percentage of patients complaining of long queues has remained unacceptably high in others. In addition, patients are faced with severe difficulties travelling to and from hospitals. Faith narrates the experience of patients from the uMlazi township, who travel long distances before dawn to HIV/Aids clinics near the Durban city centre. For them, the experience of the public health system is arduous.

Meanwhile, her experience of the patient care itself is a reminder that as well as losing a rich history in the closure of McCord, the greatest and most immediate loss is for patients like her – who are losing their access to affordable and accessible healthcare. DM

Main photo: An undated photo of doctors on a ward round at McCord Zulu Hospital. (Photo courtesy of Julie Parle, Catherine Burns and Vanessa Noble)