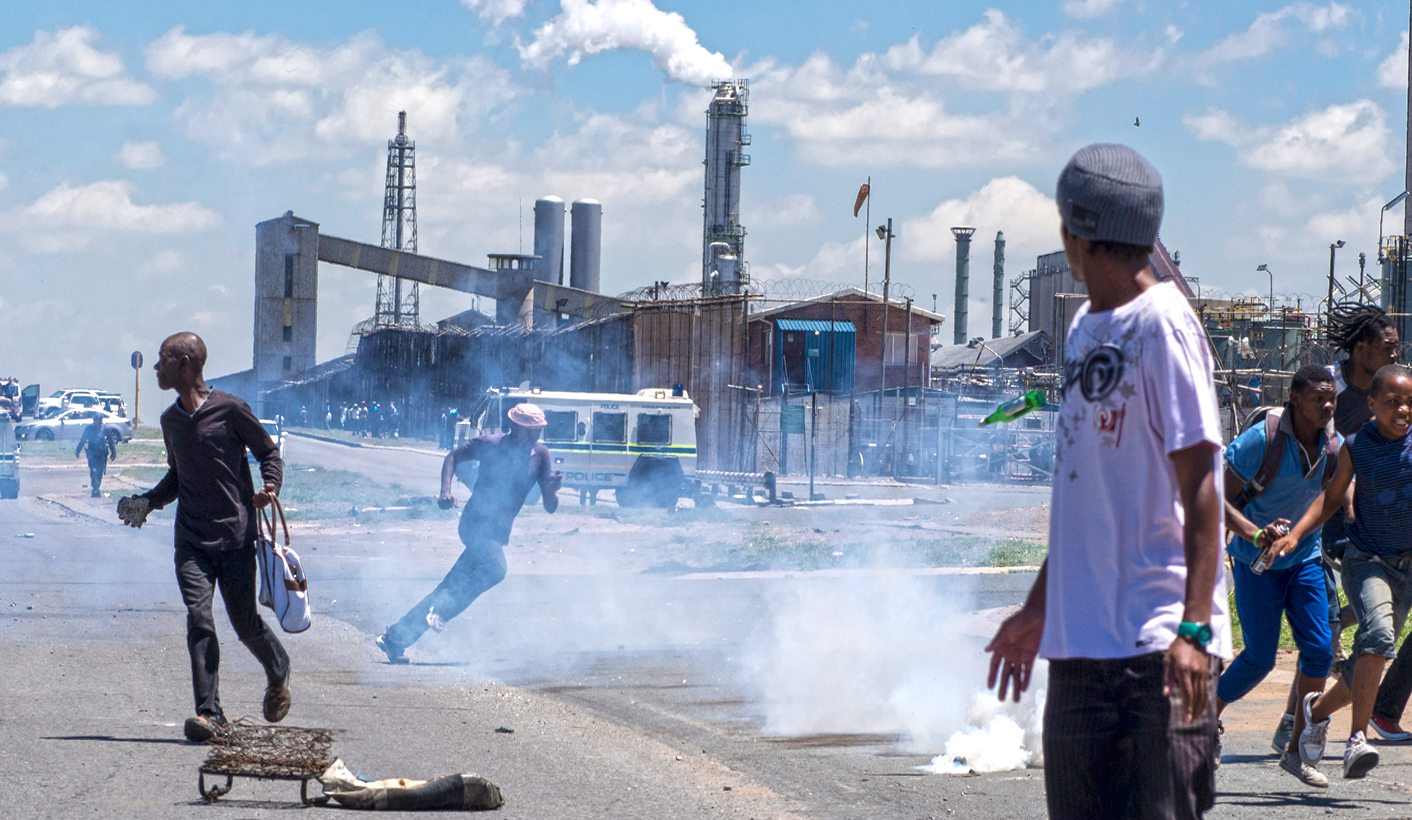 After two days of violent protests against plans to merge Sasolburg into the Ngwathe local municipality, Sasolburg’s black township, Zamdela, was quiet for a brief spell on Tuesday morning. The roads were littered with the burnt-out carcasses of trucks, bakkies, buses, and debris from concrete blocks to tree stumps. But when Cooperative Governance and Traditional Affairs Minister Richard Baloyi failed to address them, both the disgruntled elders and angry youngsters formed a deadly mob that streamed out of the stadium and into the township. What followed was mass looting, arson and a two-hour siege of the local police station. By GREG MARINOVICH & THAPELO LEKGOWA.

The crowd gathered at Moses Kotane Stadium at 10:00, believing that either Cooperative Governance and Traditional Affairs Minister Richard Baloyi, or Free State Premier Ace Magashule, would address them. The protestors, numbering over 5,000, accused Magashule of wanting to ruin Zamdela township for his own financial gain by merging Parys, a low-income area, into the municipality that governs Sasolburg, a relatively prosperous industrial area. By 11:00 the crowd was angry and marched out of the stadium. At its rear, the crowd was quiet, but the leading protestors were more aggressive, carrying sticks, stones and bricks, ready to use them. Police made a line at the edge of the township, across the road leading past the heavily fortified Sasolburg refinery. Here, the situation immediately escalated. Police started shooting teargas and rubber bullets as protestors threw rocks in the drawn-out battle.

The crowd started to stone passing vehicles and journalists. A number of journalists were stoned, beaten and threatened while many reporters have given accounts of their cars being damaged.

While the fight continued, the majority of the crowd left and marched to the police station. They encircled the station, trapping police inside. A local commander said by telephone that the police had barricaded themselves inside and retrieved their R5 assault rifles from the armoury. Police armoured vehicles sent to relieve them were unable to get through, officers on the outskirts of the township told the Daily Maverick.

Clashes with police continued across Sasolburg, but after two hours a unit of the Tactical Response Team arrived and managed to drive the protesters away from the Zamdela police station. At about 15:00, spent shells of rubber bullets could be seen on the ground around the station but there was no sign that live ammunition had been fired from outside the building.

Two people are reportedly dead after a private bakkie ferrying four injured residents tried to pass through police lines. The four people could be seen lying down, none of them responding to the urgent efforts of a friend crouched above them in the cramped canopy. The man, in his mid-20s, was seen pleading with the still body of a friend. He moved to another man who lay face down near the cab of the bakkie, who also did not respond. It is unconfirmed that any of these particular individuals is dead, but police say that one man died on the way to hospital. A man weeps as he tries to get shot friends to respond to him in the back of a van taking them to hospital after clashes with police. 22 January 2012, Zamdela, Sasolburg, Free State. Photo Greg Marinovich / Storytaxi.com

Police searched the driver’s backpack for looted items, and asked him in Sesotho about the injured men, “Are these the guys who were at the police station trying to kill the police?”  The scared driver’s response was, “We were just ordered to take these people to the hospital.”

The police reluctantly let the bakkie pass to the hospital. Officers were overheard saying, “Fix the dogs and then arrest them,” and then to the young driver, “Go you fucking dogs, go!”

A little later, a traffic officer was overheard discussing the police actions with an emergency worker, remarking that, “They are protecting white people, while they are busy shooting their own people.” He went on to say that he had heard that the police who had opened fire with live ammunition at the besieged Zamdela police station, were white police.

During the protests, looting and robbery spread across the township. Liquor worth more than R2 million was stolen from a single store, with some protestors appearing extremely drunk or hung-over. Petrol stations were looted and three ATMs ripped apart and robbed. A private house was set alight, as was the taxi operator office.

It is clear that this was more than just anger over yet another careless and undemocratic decision to move people from one municipality or province to another. Looted buildings and walls carried numerous examples of crude graffiti saying “Fuck Ace Magashule” and more restrained posters called for action. Residents the Daily Maverick spoke to, said Magashule has “dozens of relatives” employed in the Parys/Ngwathe municipality, which was, they said, broke.

One resident denied that the protests had anything to do with the alleged chicanery over delegates to the ANC’s conference in Mangaung at the end of last year. It was purely a matter of the demarcation, he claimed.

Yet the targets that the rioters could reach were initially the foreign-owned shops, where there was also the added attraction of looting. One such victim was Zimbabwean hair-salon owner Norlan Mangwadu. Surveying the soaked remains of  Letie’s Salon, which he and his sister opened four years ago, Mangwadu was quite phlegmatic, saying, “We’re going to start again.” The criminals among the protesters stole all their equipment, stock and the television. They destroyed the furniture. “The people who did this are people we live with everyday,” he added.

By nightfall, Magwadu and his sister had simply retreated from the scene, fearfully locking themselves in their home.

Once the crowd could not vent their grievances on a government official or politician, and thwarted in their plan to loot the “white” town of Sasolburg, the easiest targets of choice were the journalists, guilelessly moving among the crowd.

It would seem that the anger and easy violence of the crowd was inflamed by the cavalier approach of the state to their lives and wishes. Yet deeper down, there is a great anger among these economically disenfranchised people, an anger that the have-nots direct at the haves. Be it the barely-haves, such as industrious and prudent foreign business owners, or the middle-class journalists, who appear to revel in their right to swan into impoverished and frustrated communities when there is a good story afoot.

The final target of their anger harks back to the protests of the 1980s when puppet black municipalities imposed financial hardship on township residents. The crowd of several hundred belligerent protesters said they would burn the homes of local councillors and police officers who lived in the township. For the most part, local police were apprehensive about what would happen during the night.

“I would rather lose my job, but I will not let my family be endangered.  If anyone comes to my house I will shoot them and we will discuss the rest later,” one police officer was overheard saying to his two colleagues.

The councillors and their families had been evacuated earlier in the day.

Smoke billowed over the township in the afternoon from multiple fires. Police armoured Nyalas raced back and forth, and the sound of gunshots resounded throughout the township. Violence slowed as Baloyi toured the area in an armored vehicle, but the situation remained tense and the toll of the carnage was clear. The Daily Maverick saw a young woman who had been shot in the hip with a rubber bullet being piggybacked by another resident to get help. “The police shot me while I was in my yard, doing nothing. I hate the police!” she shouted. A woman who was shot by police shouts that she hates the police. 22 January 2012, Zamdela, Sasolburg, Free State. Photo Greg Marinovich / Storytaxi.com

Police were heard discussing rumours that Baloyi had unilaterally decided to retract the merger of Metsimaholo and Ngwathe municipalities. These rumours were later confirmed by the minister himself on the local radio station. “We have appealed to the leadership that the message must be carried out to the people. The leadership must tell the people that the process has been stopped,” Baloyi said.

Magashule, meanwhile, is yet to indicate whether he will meet with the protestors baying for his blood. DM

Main photo:  Protesting residents of Zamdela run from police teargas. The residents of Zamdela township rioted for three days to protest the the attempted demarcation of Sasolburg – a reasonably prosperous area due to Sasol and associated industries – into the municipality related to impoverished Parys. 22 January 2012, Zamdela, Sasolburg, Free State. Photo Greg Marinovich / Storytaxi.com