Can the NUM be fixed, bottom-up? 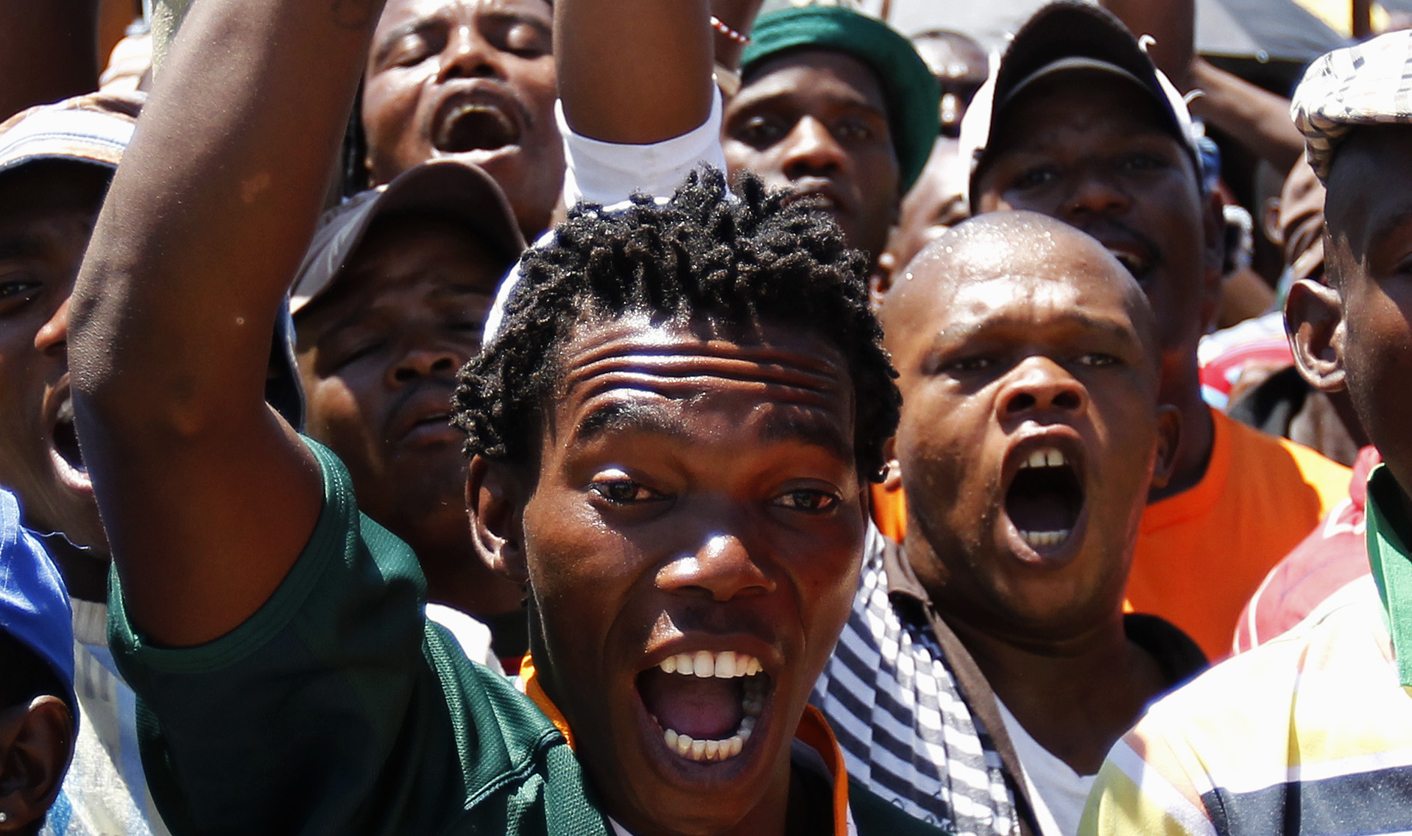 The aftershocks of the 2012 mining uprising are starting to be felt by workers throughout the industry. Amplats is about to implement massive job cuts. Harmony Gold has established who’s the boss. For the National Union of Mineworkers, it’s time to pick up the pieces. But can it regain its members by going back to union basics and getting it right in the shafts and hostels? By GREG NICOLSON.

In the introduction of the NUM’s secretariat report to its May 2012 national congress, members of the union remember how the union changed their lives. “In 1987 I was a mine security guard and we were badly treated. But the moment I joined the NUM, I had my rights as a worker and expressed my dissatisfaction against ill-treatment,” said Thabiso Tedeli. To lighten the mood, the report then features brighter moments from the life of miners.

It highlights the union’s proud history on its 30th anniversary, but soon moves to its challenges. In Rustenburg, says the report, the NUM saw unending divisions, violence, members ignoring their leadership, and slow responses to crises.

Then came Marikana, when the mining industry faced mass strikes and the NUM’s failures became so public.

The union now has to ask how to solve those problems: should it start in the shafts and hostels by getting its core responsibilities right?

That’s where the problems are most pointed. The NUM report found that some workers were vying for leadership positions simply for personal benefit, with little concern for their fellow workers: they want to be unionists for the money, to disrupt other leaders, or to get a better job after mining. “There has also been concern with the emergence of some leaders who do not uphold the truth. Simply put, they have a propensity to lie,” said the secretariat report. In the Rustenburg region, which saw strike after strike in 2012, the NUM saw “unending leadership tensions”. Elections turned violent, members had “low loyalty levels” and they turned against the NUM in their thousands and joined the rival Association of Mineworkers and Construction Union (Amcu).

Cosatu general secretary Zwelinzima Vavi, ever the helpful meddler when other leaders fail to join the dots, noted that it is becoming common for English-speaking and literate workers with more qualifications to be elected as shop stewards, regardless of whether they represent the workers. One third of Cosatu’s members are functionally illiterate but “they are not in the membership,” he said, at a press conference in December 2012, summing up the challenges ahead. “So what do you expect? Their issues will not be taken up vigorously… They find themselves sidelined by the union.”

Branch offices are now dominated by skilled workers more likely to sit at a desk than work down a shaft. “If we have a leadership that is so far removed from the realities of the working people then a danger may creep in that they do not take up the issues that do not reflect them directly because they have a comfort in the status quo,” said Vavi at Cosatu’s congress last year.

Miners, according to the general secretary, “toil in the most wretched, unhealthy and dangerous conditions, kilometers underground, for wages that come nowhere close to the value that their labour creates for their employers. The rock drill operators at the centre of the (Marikana) dispute perform a more dangerous, unhealthy and difficult job than anyone else in the world. They face death every time they go down the shafts.”

Low pay and unsafe conditions – no wonder union members turned on their local NUM leaders, accusing them of selling out, ignoring their complaints, and signing deals without wider consent, as happened when the NUM agreed to an 18% pay increase for rock drill operators at Impala Platinum last year, creating disgruntlement and sparking strikes.

NUM spokesman Lesiba Sheshoka told the Daily Maverick the union is currently reviewing what changes to make at the branch and shop steward level to address the problems. He wouldn’t go into detail, but on Sunday ANC secretary general and former NUM general secretary Gwede Mantashe had some advice for the union members. His tone was optimistic but laced with the reality of the situation: the NUM is under threat and actions must be taken to win back members.

Shop stewards need to take their members’ concerns seriously, no matter how big or small, said Mantashe. They must only sign what their members agree to and approve. They have to unite the workforce and if they want to protest they must do so peacefully. It’s “Introduction to Union Work 101” stuff, suggesting the NUM will be fine if the shop stewards just do their job.

It will not be so simple, however. Amcu has taken a chunk of the NUM’s membership in the last year and Amcu president Joseph Mathunjwa is offering a union that can focus on its members rather than the politics the NUM deals with. “A politician needs to be a politician; a businessman needs to be a businessman; a unionist needs to be a unionist,” he told the Daily Maverick on Monday. “We put ourselves in [the workers’] gumboots so to speak. So when we enter that boardroom we don’t pretend to be management.”

Whether it’s true in practice or not, Amcu is now a viable alternative for miners while the NUM has to face the realities of its own near-implosion. As Sakhela Buhlungu wrote in A Paradox to Victory, unionists within Cosatu and the Tripartite Alliance are doing much more than just union work and have great incentives (that have nothing to do with their fellow workers) to be elected.

The problems within the NUM are not confined to the shafts and branch offices but run through the union. If it goes back to basics – listening to members, getting mandates and acting on them – it may retain its strength. But changing the culture of branches requires changing the culture of the organisation; change that also needs a clear direction from the top.

For now, that’s unlikely. The NUM’s leaders kept their head in the sand (or focused on politics) during Marikana and the union is talking tough but not suggesting solutions on potential job losses in the mining industry.

At Mangaung, the union’s president, Senzi Zokwana, won a spot on the ANC’s national executive committee and with it comes the chance to push pro-labour policies and try to address some of the economic fundamentals behind inequality. But he is also in the awkward position of being a part of the ANC’s decisions. Whatever the party decides on labour broking, a youth wage scheme, e-tolls, or intervention in mining, Zokwana will be included and will have to stomach what comes his way, whether it benefits workers or not.

While NUM is under pressure, its leaders need to speak for their members and prove their commitment rather than be chastened. Some less idealistic miners might think Zokwana is priming himself for another job, but that’s nothing new at the NUM. DM

Photo: Miners on strike chant slogans as they wait for suspended ANC Youth League President Julius Malema to address them outside the Impala platinum mine in Rustenburg, 120 km (75 miles) northwest of Johannesburg February 28, 2012. South Africa’s National Union of Mineworkers (NUM) urged its members on Monday to accept an offer by Impala Platinum to rehire miners at its Rustenburg operation, the scene of a violent illegal strike that has pushed platinum prices higher. REUTERS/Siphiwe Sibeko