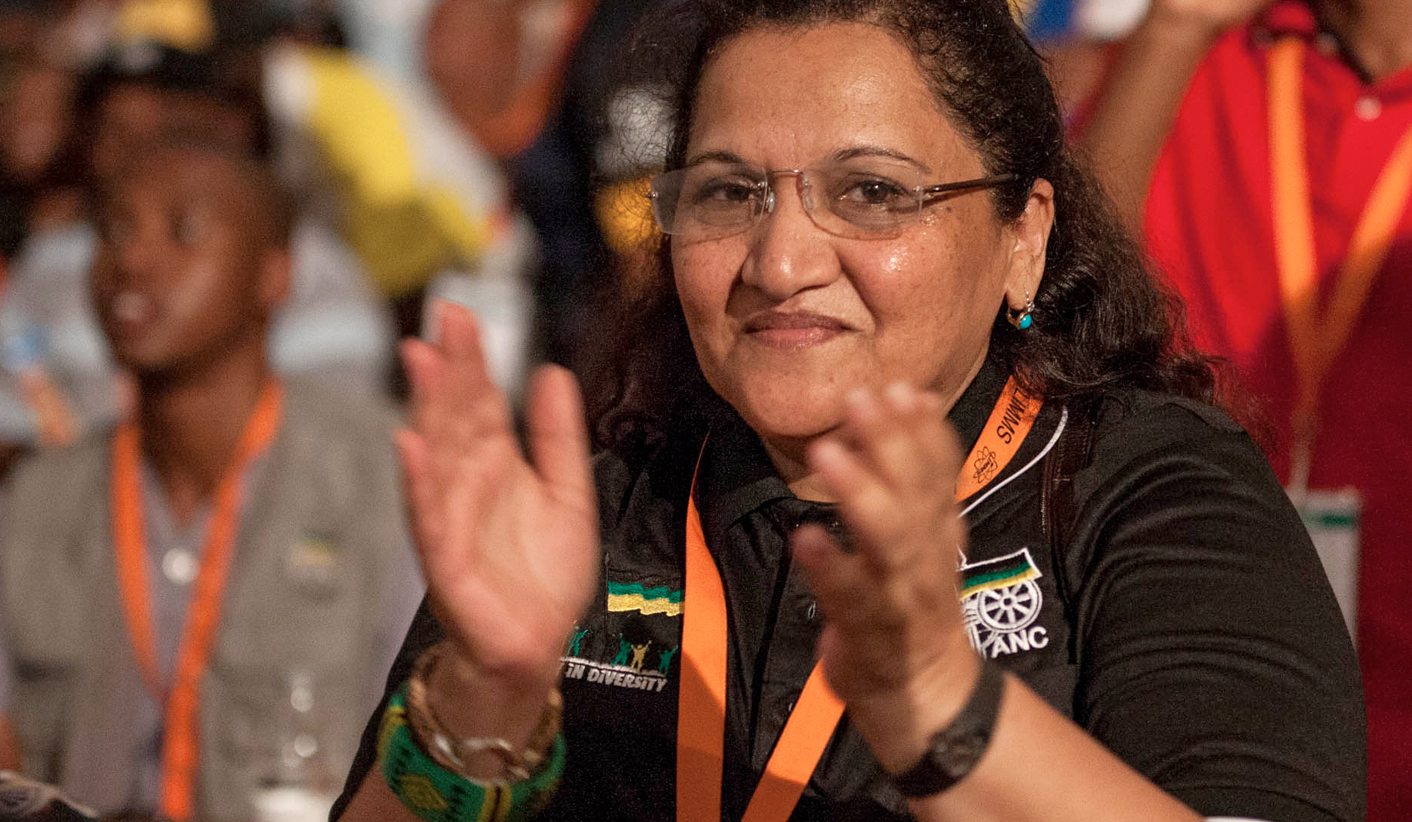 The term “counter-revolution” has become a euphemism in the ANC for anybody who does not think and act the way those in power do. From the opposition, to judges, the media, and even in their own ranks, the counter-revolutionary label is used to brand those who swim against the tide. It is also a weapon to cause alarm about some or other invisible threat to the party. Yet the biggest threat to the revolution is the ANC’s own conduct and contempt for its own constituency. By RANJENI MUNUSAMY.

The ANC’s newly elected deputy secretary general, Jessie Duarte, certainly earned her stripes this weekend. In order to be a senior office bearer of the party, you need to wield muscle and talk tough. Duarte, elected uncontested at the ANC’s 53rd national conference in Mangaung in December, has not been in the public eye after she quit the Presidency in a huff in 2010, following a fallout among senior officials.

Now she is back in the spotlight, assuming a fulltime position at the ANC headquarters as Gwede Mantashe’s deputy. On Saturday she addressed a mass rally in the Eastern Cape as part of the ANC’s 101st anniversary rally and, for no apparent reason, other than a possible threat from the Democratic Alliance to the ANC’s dominance in that province, she came out fighting, using the parlance of  the ANC.

According to the City Press, she said the ANC should not allow the country to be led by neo-colonialists who looked like they were revolutionaries.

“Let us be careful comrades, these neo-liberals and neo-colonialists are singing and dancing like we do, but we know that in their private meetings they want to take this country backwards,” Duarte said.

“Theirs is to protect the interests of the minority,” she said.

“Counter-revolutionary” was the term historically used to brand those who opposed the fight against Apartheid and the reversal of its legacy. Now it is a method of negative campaigning the ANC uses to demonise its opponents in all sectors of society.

In 2008, Mantashe caused a public storm when, during President Jacob Zuma’s corruption case, he was quoted as saying that Constitutional Court judges were part of “counter-revolutionary forces” preparing to “pounce on Zuma”.

In an interview with the Mail & Guardian in July 2008, Mantashe said his remarks stemmed from concerns over what appeared to be a concerted effort by “counter-revolutionary forces”, including the Constitutional Court and opposition parties.

After last year’s Marikana massacre, the ANC maintained a safe distance from the turbulence and trauma, in some ways playing down the enormity of the tragedy and its consequences. But Mantashe trundled out the “counter-revolutionary” label to condemn the involvement of, among others, expelled ANC Youth League president Julius Malema and the Association of Mineworkers and Construction Union (Amcu), which is challenging the dominance of the ANC-aligned National Union of Mineworkers (NUM) in the mining sector.

It seemed not to occur to him that both Malema and Amcu had occupied a vacuum at Marikana caused by deficiencies of the ANC and the NUM.

But nobody is able to employ the counter-revolution label as sweepingly as SACP general secretary Blade Nzimande does. It is a constant theme in his speeches and writings, used to attack “neoliberal forces” and the “anti-majoritarian liberal offensive”. Initially it was just the opposition, the media and analysts who bore the brunt, but the counter-revolutionaries now appear to include NGOs which challenge the ANC government and even Cosatu.

Speaking at last year’s Cosatu national congress, Nzimande said: “Liberals, as has always been their history, cherry-pick the battles they want to wage, and sometimes opportunistically want to be seen as friends of the working class. They will stand up against e-tolling in Gauteng, not because they really care about the working class, but in opposition to the ANC government… Whilst we accept that Cosatu may form tactical alliances with various formations at different points in time, caution must always be taken against who are our real friends.

“The more recent ideological offensive against our movement and revolution is that of a charge that there is an absence of leadership in society and an attempt to project our movement as being at sea, not knowing what to do… Our leadership and movement is not being judged on progress made in terms of commitments made, for instance, around our five priorities, but through a targeted attack on the movement as a whole, especially Cosatu and the ANC, with a particular focus on the president of the ANC and the republic, Comrade Jacob Zuma. The print media is actually at the centre and forefront of this offensive,” Nzimande said.

Addressing the closing session of the Mangaung conference, Nzimande said there was a “creeping counter-revolutionary threat to the deepening and consolidating [of] our democracy.”

“Such counter-revolutionary [sic] seeks to use the very same platforms we use to strengthen our democracy e.g. the current court challenges to this conference is part of this offensive,” Nzimande said, referring to the cases brought by ANC dissidents in the Free State and North West.

In all these statements blaming a whole range of people and institutions for the woes of the ruling party and branding them as counter-revolutionary, there seems to be little appreciation of what the ANC and its leaders themselves do to “counter the revolution”.

In the Sunday press just yesterday, there was irrefutable proof of how the ANC uses government and parastatal resources for crass expenditure and for the benefit of the politically connected. These scandals were not made up by counter-revolutionaries in the opposition or the media but admitted to by ministers in parliamentary replies.

After numerous scandals involving wanton and exorbitant expenditure by members of Cabinet on luxury cars, hotel stays, overseas travel and palatial homes, all at state expense, the ANC still seems not to dissuade overspending and extravagance in government. While the outcome of numerous investigations into renovations at Zuma’s private home at Nkandla are pending, a new scandal emerged on Sunday over the Department of Public Works spending nearly R65 million on renovations to the homes of ministers and deputy ministers.

The Sunday Times reported that Public Works Minister Thulas Nxesi admitted in a parliamentary response to an MP’s question that the renovation bills included R15 million spent on a Cape Town house allocated to Rural Development Minister Gugile Nkwinti, a R10.67 million overhaul to a house earmarked for use by deputy Transport Minister Lydia Chikunga, and almost R5 million on upgrades to a home allocated to Agriculture Minister Tina Joemat-Pettersson.

The City Press reported that three of the country’s biggest state-owned companies paid millions of rands to bankroll The New Age business breakfasts, hosted by Zuma’s close friends, the Gupta family, who own the newspaper.

Transnet forked out R17.5 million for 18 breakfast sessions; Eskom paid R7.2 million to sponsor six sessions and Telkom sponsored 12 business breakfasts to the tune of R12 million, the City Press revealed. The SABC broadcast The New Age breakfast briefings live at no cost to the organisers. The multi-million rand sponsorships were admitted to by Public Enterprises Minister Malusi Gigaba in response to a parliamentary question from the Democratic Alliance.

In all the cases of wanton expenditure revealed over the past few years, the ANC has never condemned such practices outright or disciplined its high-ranking members for blowing taxpayers’ money on their high-flying lifestyles, despite all these bringing the party into disrepute. These scandals reveal the ANC’s betrayal of the poor and the disadvantaged who they claim to still care about. They alienate the ANC from its heroic past of glorious and selfless struggle, and from its current priorities to fight poverty, unemployment and inequality. If anything, these practices promote inequality and show contempt for those who entrust the ANC with their vote.

While the ANC’s senior leaders keep warning of invisible bogeymen wanting to destroy the party and reverse the revolution, they conveniently disregard the conduct of their own.