How to dispose of a deposed dictator: The Mubarak dilem...

How to dispose of a deposed dictator: The Mubarak dilemma 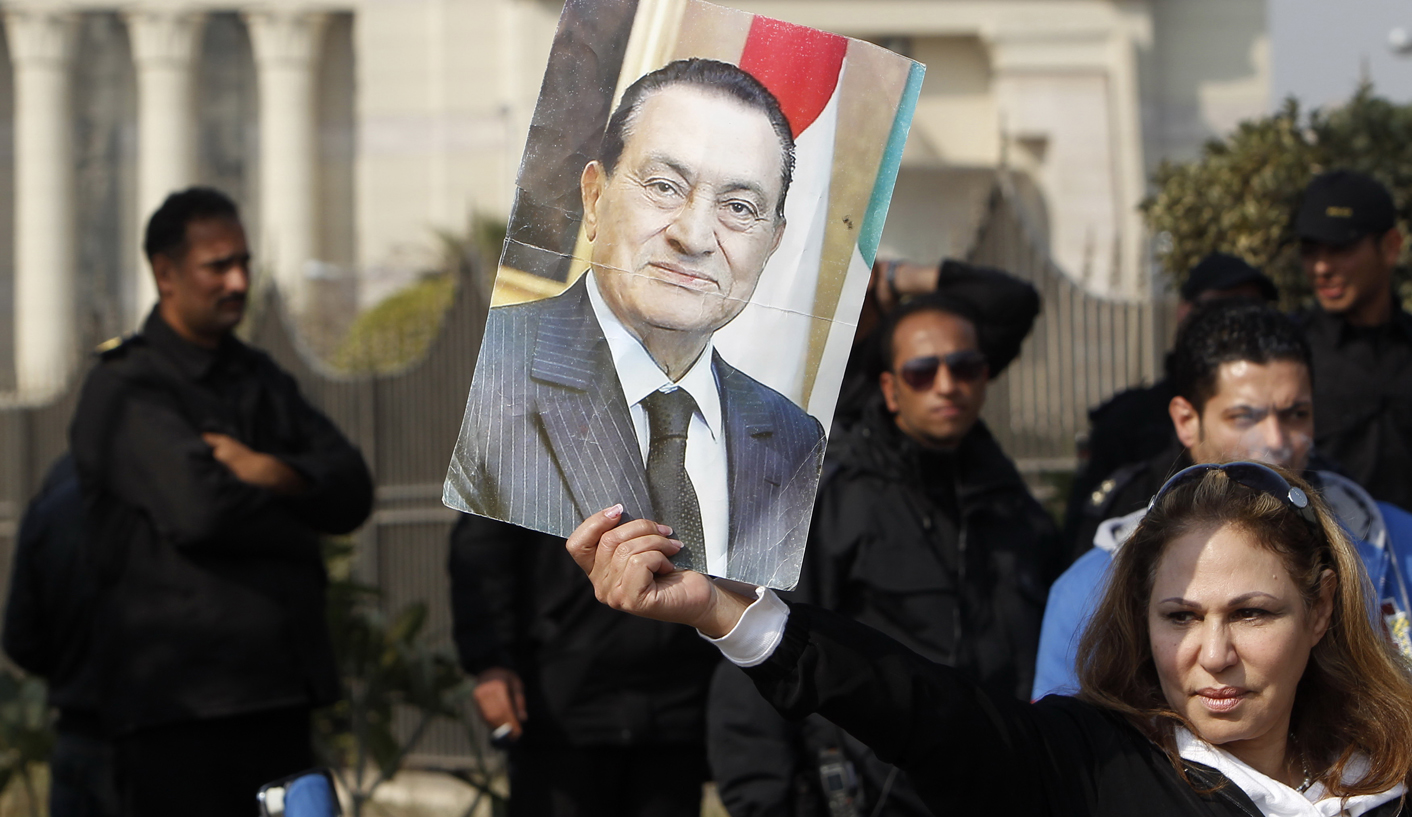 It’s been nearly two years since he was deposed, and still Egypt has no idea what to do with Hosni Mubarak. The old man – he’s 88 now, and increasingly frail – has perplexed Egyptian authorities who just can’t figure out how to punish him for his starring role in the oppression of the Egyptian people over nearly three decades. By SIMON ALLISON.

We all know by now that revolutions aren’t as straightforward as they’re supposed to be. We’ve watched Libya degenerate into chaos as rival militias compete for resources and attention. We’ve seen Tunisia struggle to figure out what direction it will take, as the economy tanks and unemployment soars. We’ve followed the tussle for power in Egypt between the army, the Muslim Brotherhood and the secular revolutionaries, a vicious and sometimes violent political bun-fight that has left the country with a half-hearted constitution and turned Tahrir Square into a near-permanent protest venue.

But we’ve also seen justice, or something approaching it. Zine Abidine Ben Ali is rotting in a compound somewhere in Saudi Arabia. Muammar Gaddafi, of course, is dead, his mutilated body left on display in a meat locker; he’s rotting underground somewhere.  And Hosni Mubarak is rotting in prison, convicted of corruption on a grand scale and of failing to prevent the deaths of protestors during the uprisings. Who can ever forget the images from Mubarak’s trial; Egypt’s modern-day pharaoh behind the bars of a metal prisoner’s cage?

Not so fast. While the images remain intact, Mubarak’s sentence doesn’t. In a shock reversal, Egypt’s top appeals court on Sunday overturned Mubarak’s conviction and declared a retrial. While their reasons have not been made explicit, it’s thought that the decision was caused by procedural irregularities during the trial and discrepancies in some of the evidence presented.

Mubarak’s lawyers are very pleased with themselves. “The previous ruling was unfair and illegal,” said defence attorney Yousry Abdelrazeq, speaking to the Los Angeles Times. “The case was just a mess and there was no evidence against Mubarak.” In fact, neither the defence nor the prosecution was happy with the previous ruling, and both had appealed to the higher court to have it overturned. The prosecution, however, had something rather different in mind: they wanted an even stronger conviction and a stiffer sentence.

With a bit of patience, prosecutors are likely get their wish. New video and eyewitness evidence that has been gathered, including the revelation that Mubarak watched a live video feed of the killing of protestors, means there’s a stronger case than ever against the former dictator.

So while justice should be served, eventually, politicians across the political spectrum will be dreading the retrial. Even though Mubarak will remain in prison for the duration, going through the whole process again is a headache that Egypt’s new and troubled government doesn’t need as it tries to address the many problems it has inherited from Mubarak’s regime.

“A retrial of Mubarak certainly has the potential to open old wounds of the uprising, particularly if it looks like Mubarak and his interior ministry aides will receive lighter sentences for the crimes,” commented GlobalPost’s Erin Cunningham. “…as President Mohamed Morsi consolidates power, and a new constitution enshrines the right of the military to try civilians, it feels to many like the revolution was for naught. That mix could prove explosive ahead of parliamentary elections in the coming months. And Egyptians have not yet abandoned protests and even violent street battles as a political tactic or way of venting political frustration.”

But Mubarak’s age and obvious ill-health might just work in his favour. “There is always a danger that Mubarak’s retrial will provoke sympathy rather than revulsion,” wrote veteran Middle East correspondent Robert Fisk for the Independent. “His supposed comas, his fluid in the lungs, his slips in the bathroom have all been meticulously recorded in the Cairo press. What do you expect to be the fate of an 84-year-old man? Egyptians are a forgiving people and, should Mubarak expire before he faces his judges yet again, no one will throw stones at his funeral.”

Either way, Egypt’s new government would prefer Mubarak out of the spotlight – he’s either going to stir up a lot of anger or cause people to put on those rose-tinted glasses and remember the good old days when Egypt was stable and the economy good (this was a mirage, of course, but seductive nonetheless).

The reality is that letting deposed dictators hang around at home in any capacity is a bad idea, no matter how much new governments wish to exact justice themselves. The Iraqi government learned this lesson: despite promising an elaborate show trial, it realised the quicker it disposed of Saddam Hussein the better, and sped him through the courts and into the hangman’s rope before anyone had time to protest.

Though death is the most certain way to finish off a dictator, exile is a pretty good option too, and the world is littered with vagrant tyrants who can’t return home. Ethiopia’s Mengistu Haile Mariam has been a guest of Robert Mugabe since 1991 when he was forced out of the presidential palace in Addis Ababa, while Ben Ali’s home in Saudi Arabia is said to be just a few kilometers from the villa that Ugandan strongman Idi Amin occupied until he died.

Unfortunately for Egypt, neither of these options is available when dealing with Mubarak. Exile is out of the question because judicial proceedings have already begun, and it would be humiliating for the government to turn their back on these. And death is not an option anymore because under Eygptian law, a sentence imposed in a retrial cannot be harsher than the one imposed in the original trial. As Mubarak was not given the death sentence the first time round, he cannot receive it now – unless, of course, it comes from the Grim Reaper himself, an outcome which might prove the most politically expedient of all. DM

Photo: A supporter of Egypt’s deposed president Hosni Mubarak holds up his picture outside the Maadi Armed Forces hospital, where Mubarak is currently being held, in Cairo January 13, 2013. Egypt ordered a retrial of Mubarak on Sunday after accepting an appeal against his life sentence, opening up an old wound in the painful transition from decades of authoritarian rule. The judge did not clarify the legal basis for the retrial, nor did he say when the hearings were likely to start. The exact state of Mubarak’s health is not clear, though last year some media reported that he was close to death. He was moved from prison to the military hospital in late December after breaking ribs in a fall. REUTERS/Mohamed Abd El Ghany.