Analysis: Measuring racial hatred, one murder at a time 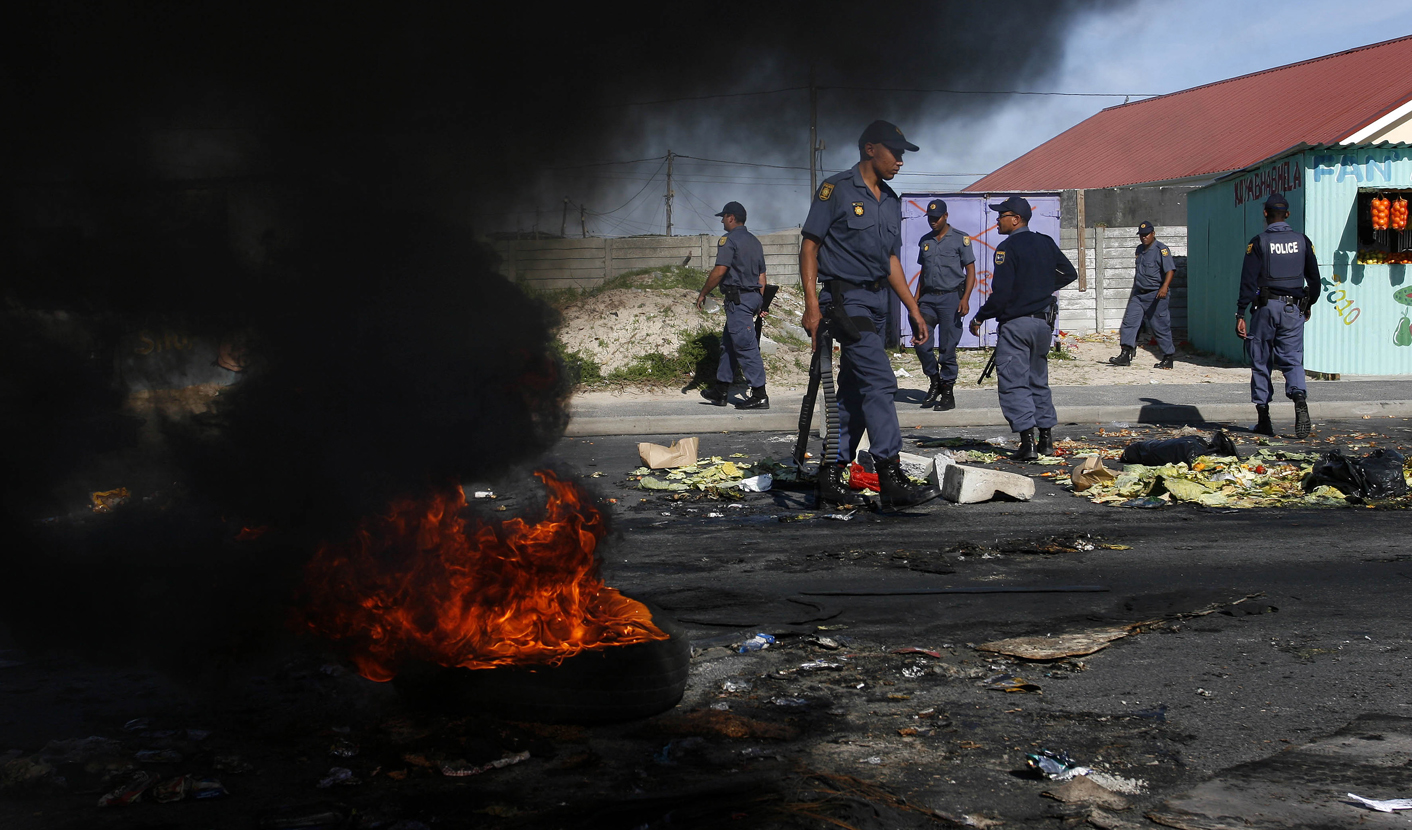 These days in the North West, the people of Skierlek are being asked to forgive and forget race-inspired killings that still wound the community five years after the fact. In Sandton, an elderly man is in ICU after being brutally beaten in a racist attack. And yet, despite the bloody violence regularly meted out by bigots, South Africa still doesn’t have hate crime legislation. By MANDY DE WAAL.

It was late afternoon on Monday 14 January 2008 when a youth called Johan Nel, dressed in camouflage fatigues, walked down a dirt road in an informal settlement in the North West and randomly started shooting at people with a hunting rifle. Spitting racist invective, Nel would fire hate into the community called Skierlek near Swartruggens. The rapid staccato would claim four lives – 31-year-old Annah Moiphitli and her three-month-old baby Elizabeth; 10-year-old Enoch Tshepo Motshelanoka, and 37-year-old Sivuyile Peyi.

These days, five years after the murders, the local government is asking the people of Skierlek to forgive and forget, as part of a commemoration week that will run until 20 January. “The people of Kgetleng Local Municipality (which governs the Skierlek settlement) have come a long way since the shooting. From the fear of walking alongside fellow white people and the fear of just leaving our homes to just go buy a loaf of bread. The families have also come a long way in their recovery process from this unfortunate incident: although they can’t bring their loved ones back, they have come to terms with their losses,” Kgetleng Rivier Municipality Mayor, Kim Medupe, told journalists at a media junket to promote the event.

Also on the agenda is an Anti-Racism Summit at Swartruggens Hoërskool on Thursday 17 January 2013. The local municipality says that the commemoration is “very important, especially in (a) country that is still healing from the wounds of Apartheid”.

The traumatic impact of a hate crime is significant and not limited to the individual(s) affected by violence motivated by prejudice. Studies show that victims of hate crimes suffer consistently higher levels of psychological trauma that require specialist intervention. Because hate crimes are motivated by bigotry, the post-traumatic aftermath of an attack can permeate a social group or community. This given, can the people of Skierlik be expected to forgive and forget at a time when racism is on the rise?

South Africa has been a democracy for 18 years, and the nation’s transformation is heralded globally as a model for peaceful change, but the lived reality is starkly different from the picture of rainbow nation. A survey by the SA Reconciliation Barometer late last year showed that despite the fact that Apartheid was legally abolished close on two decades ago, we remain a country divided, a nation largely unable to forge relationships across racial lines.

The 2012 Reconciliation Barometer revealed that less than a third (27.4%) of locals interacted with a person of another race “always or often, on ordinary weekdays”. A quarter (25.9%) did this “sometimes” and close on half (43.5%) of those surveyed never or rarely spoke to someone of another race.

The survey indicates that contact and socialisation levels between races increased between 2004 and 2008. However in recent years this trend has changed. “The survey, which has been conducted since 2003, shows that between 2004 and 2008, contact and socialisation levels between races increased, but this has flatlined in the past few years. Certainly, latent and overt stereotypes, fear or trepidation about others, and even naked racism may have contributed to static levels of interaction and the slow pace at which social bonds are being forged between South Africans of different race groups,” the report states.

It is unlikely to improve if the racial furore that opened 2013 is anything to go by. The year 2012 ended with “umlungus” reaching for their tablets at their resorts of choice in large numbers to elicit a national outcry in response to President Jacob Zuma’s statement that it was “un-African” to own a pet.

Opined Schutte: “I have decided to start the New Year with a letter to you all. It is a letter that implores you to wake up and smell Africa with a fresh white nose,” in a diatribe that dictated to whites how they should think, act and deal with issues of race, class and identity. The letter caused a media flurry, and soon thousands of responses started flooding social networks, a high percentage of them extremely racist and misogynistic.

“Oh, just come right out and say what you really mean ya cowardly B****. Dear White people, just DIE! You deserve every attack, robbery, murder and rape that blacks bestow on you,” one blog commentator wrote.

“Should I spend the rest of my life on my knees begging forgiveness for things that happened before I was born? When can I stop begging, or should I die on my knees?” asked another.

Other comments included: “Stop encouraging the genocide of white people in Africa”; “It has always been the females of the white races that are determined to destroy white males, and through that the race”; “Lady!!! You are one sick woman”; and “A distastefully divisive fat slut with a huge chip on her shoulder.”

Black consciousness campaigners Athi-Nangamso Esther Nkopo and Andile Mngxitama weighed into the battle, and called Schutte’s epistle typical of an “anti-racism industry” forged by guilty white liberals that is characterised by an apologetic acknowledgement of history without redress. Before February had opened its door, writing angry missives about race had become a franchise, and online forums were becoming a war zone.

And then it happened. A young, white male allegedly picked up a golf club and bludgeoned an elderly black employee of Woodmead’s World of Golf to within an inch of his life. The attack was so severe that sixty-year-old Nathan Maluleke had to be treated in ICU at a Sandton hospital.

Back in Skierlek, the reconciliation celebrations continue and were kicked off with visits to gravesites of the victims of the race-hate shooting and a series of performances by the community took place. “A journey of a million kilometres begins with a single step on the path towards reconciliation,” a government spokesperson said in an attempt to drive locals to participate and added that the events would help the community “come together”. Encouraging participation in this event has been challenging. “It has not been easy bringing people of different races together since that fateful day. When we initially called community meetings, white folk in the area were reluctant to attend,” said Medupe, the mayor.

Alex Ndlovu, a survivor of the Skierlik shootings, told Sowetan that that in his case forgiveness was not possible. “I was shot and could have easily been killed. A three-month-old baby and her mother were killed, and for what?” Ndlovu asked. “I find it very difficult to forgive someone who went out to kill us for no reason at all. Even during his court appearances, he would look at us and smirk. That made me very angry,” Ndlovu added.

To date South Africa doesn’t have any legislative framework or policies that specifically deal with hate crimes. This means that hate crimes are not officially recognised by SA’s law enforcement agencies or the judiciary, and there is no tracking of data or analysis of how and why these events happen, and what can be done to prevent them.

But this could change, as following intense lobbying from activists over the past few years, the Department of Justice is now looking at developing specific policies to deal with hate crimes, which could extend to legislation to deal with the same. Whether it is xenophobic hatred, the correctional rape of lesbians, murderous attacks on gay men or racial brutality, South Africa could soon officially recognise prejudicial hate-based violence as an important first step in stopping the plague that terrorises our entire society.

The new laws may not stop another Skierlek-like shooting from happening again, but the message will be clear: there’s no place for racial hatred in South Africa. DM