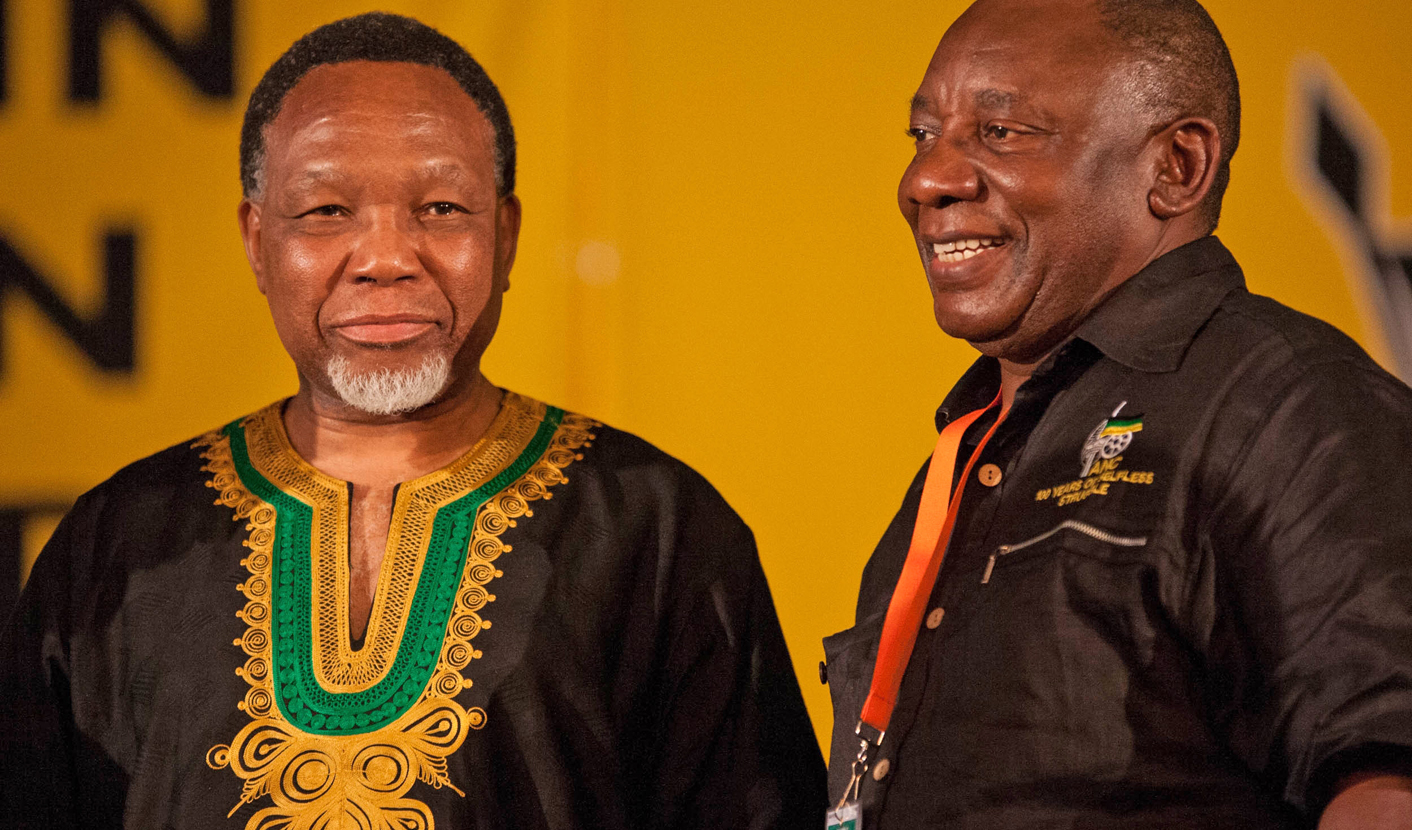 In the past week, South Africa caught a glimpse of an ANC leadership formula that might actually work. Cyril Ramaphosa, the ANC’s new deputy president, came out to play, and President Jacob Zuma delivered a big speech without bothering too much with the spadework. The National Development Plan is now to be rolled out as the centrepiece of government policy. But it needs a champion. And yet, rather strangely, Zuma intends to keep his deputies in the wrong places, even as the solution, as exemplified in the last week, is obvious. By RANJENI MUNUSAMY.

President Jacob Zuma was out of the country last week, attending the inauguration of Ghana’s new president John Dramani Mahama and then a Southern African Development Community meeting in Tanzania. Deputy President Kgalema Motlanthe was acting president in Zuma’s absence. He had exactly one public engagement during the week, visiting the Pholosho Secondary School in Alexandra on the opening day of the school year.

Meanwhile, in KwaZulu-Natal, Cyril Ramaphosa was finding his feet as an active politician again on a mobilisation campaign during a week of celebrations for the ANC’s 101st anniversary. He was the talk of the town as he charmed businesspeople, taxi commuters, ANC cadres and the media contingent tailing him.

On Saturday all three were on stage, together with the new ANC national executive committee (NEC), at the party’s anniversary rally at Kings Park Stadium. It was all very genial; everyone hugging, singing and dancing together. But it was, of course, Zuma’s time to shine as victor from the Mangaung battle and ANC president for another five-year term, before his adoring home crowd in KwaZulu-Natal.

The headline item on the programme was Zuma’s speech – which is actually the statement of the NEC, read by the president. Perhaps it was Zuma’s confidence, having secured a second term and shaken off his detractors in spectacular fashion at Mangaung, or being on home turf, but his delivery was marginally better than previous marathon speeches. He also seemed to own what he was saying rather than his usual somewhat disjointed manner.

While the ANC had been advocating for “radical” policy change to deal with unemployment, poverty and inequality, this was not reflected in the decisions taken at Mangaung. Zuma said on Saturday “monopoly domination of the economy” was an obstacle to the goals of economic transformation, growth and development.

“Decisive action is required to thoroughly and urgently transform the economic patterns of the present in order to realise our vision for the future. Given the realities in our country, we opted for a mixed economy where public, private, cooperative and other forms of social ownership complement each other in an integrated way. Within this mixed economy, we re-affirm the active and interventionist role of the state in ensuring economic development. It must be a state that has the capacity to intervene in the economy to lead development,” he said.

What this means in reality is difficult to ascertain without any specifics spelled out. However, it would seem that future planning and policy development would hinge completely on the National Development Plan (NDP), which was adopted in full at Mangaung. While the NDP had a cool reception at the ANC’s policy conference last June and at the Cosatu conference in September, the balance of forces at the ANC national conference ensured that it had a smooth passage at Mangaung. The ANC’s 8 January statement leaned heavily on the NDP.

“The plan sets out various methods to tackle unemployment, poverty, inequality and other challenges facing our country. We urge all South Africans to unite behind the National Development Plan, to drive its implementation and to work with our government to eradicate poverty, reduce unemployment and eliminate inequality by 2030,” Zuma said.

The challenge for the ANC and government now is for the NDP not to fall flat in the implementation phase, as so many programmes do due to lack of will or capacity in the public service. National Planning Minister Trevor Manuel is the person charged with pioneering the plan, but he seems to be running out of steam.

Manuel’s decision to decline to serve on the ANC NEC means he is out of the decision-making circle in the ruling party, and this lessens his leverage to implement the NDP as it is meant to be. It could also mean that Manuel intends retiring from the Cabinet at the next election. Therefore someone else needs to be charged with the project – someone with intimate knowledge of the plan from development stage, who holds a senior position in the ANC to led political weight to it and who has clout in the business sector to ensure private sector support. It also needs someone with new energy and who wants to re-establish his political worth.

One person fits the bill.

In his roadshow http://www.citypress.co.za/politics/a-fisher-of-comrades/ last week, Ramaphosa, the deputy chairman of the National Planning Commission, was doing a hard sell on the plan. He credited Zuma with initiating the commission and said the NDP would be the president’s legacy to the nation.

As one of its architects, Ramaphosa already knows the plan inside out and is passionate about it. He is the most obvious person to champion it. Zuma can still claim credit for it, but Ramaphosa can give it wings.

But Zuma seems to have other ideas about what role he wants Ramaphosa to play. In an interview with SABC television on Sunday night, Zuma said he wanted Ramaphosa to spend his time on ANC work and that he was “not going to be running between government and the ANC”.

He said he already had a deputy president in government and therefore wanted Ramaphosa to be spending a lot more time at Luthuli House (the ANC headquarters). While not giving any specifics, Zuma said Ramaphosa should be dealing with national and provincial ANC issues and would be working on cadre development.

In a rather curious statement, Zuma said Ramaphosa was “not elected because we needed somebody” but to “enhance the top six”.

Zuma’s understanding of what Ramaphosa should be doing means that the new party deputy president would be duplicating the work of the secretary general. That kind of deployment would drown Ramaphosa, as he would essentially be mediating disputes in ANC structures all over the country, and getting in Gwede Mantashe’s hair.

Zuma’s plan also means that Motlanthe stays on in a thankless job as his ceremonial deputy in the state, sitting through parliamentary debates waiting for the next 18 months to pass till he can escape his deployment. He seems excited about the decision he, Zuma and Ramaphosa took in Mangaung for him to head the ANC’s political education programme, as this has been his desire all along. With the older generations passing and the institutional memory being lost, political education is sorely needed in the ANC. Younger generations are introducing alien cultures which has resulted in the ANC losing its values and knowledge base.

The most obvious way to maximise on the strengths of his deputies and allow them to pursue their passions would therefore be for Zuma to rearrange their deployments. Ramaphosa should champion the NDP and Motlanthe should be allowed to do what he has always wanted, head political education in the ANC as a veteran. Ramaphosa would have to be phased into government and Motlanthe out of it for them to fulfil their roles properly.

Ramaphosa could be dispatched to Cabinet in much the same way Motlanthe was in 2008 after the Polokwane conference, except he would have a real function instead of a watchdog role. Zuma in the meantime can continue being the supreme leader over the party and state, while others do the spadework and plug the holes in his leadership.

The ANC NEC meets again this Thursday and Friday to elect a national working committee (they postponed doing so in Durban last Friday) and to prepare for a lekgotla which will flesh out the ANC programme for the year based on the 8 January statement. Presumably they would also get down to slotting people into roles that suit their strengths and characters.

The last thing the ANC and the country needs is two top sitting ducks with much to give waiting for the next election before they can fly. DM