Fred Turner, the man behind the Egg McMuffin and Chicken McNuggets, now cooking in the McKitchen in the sky 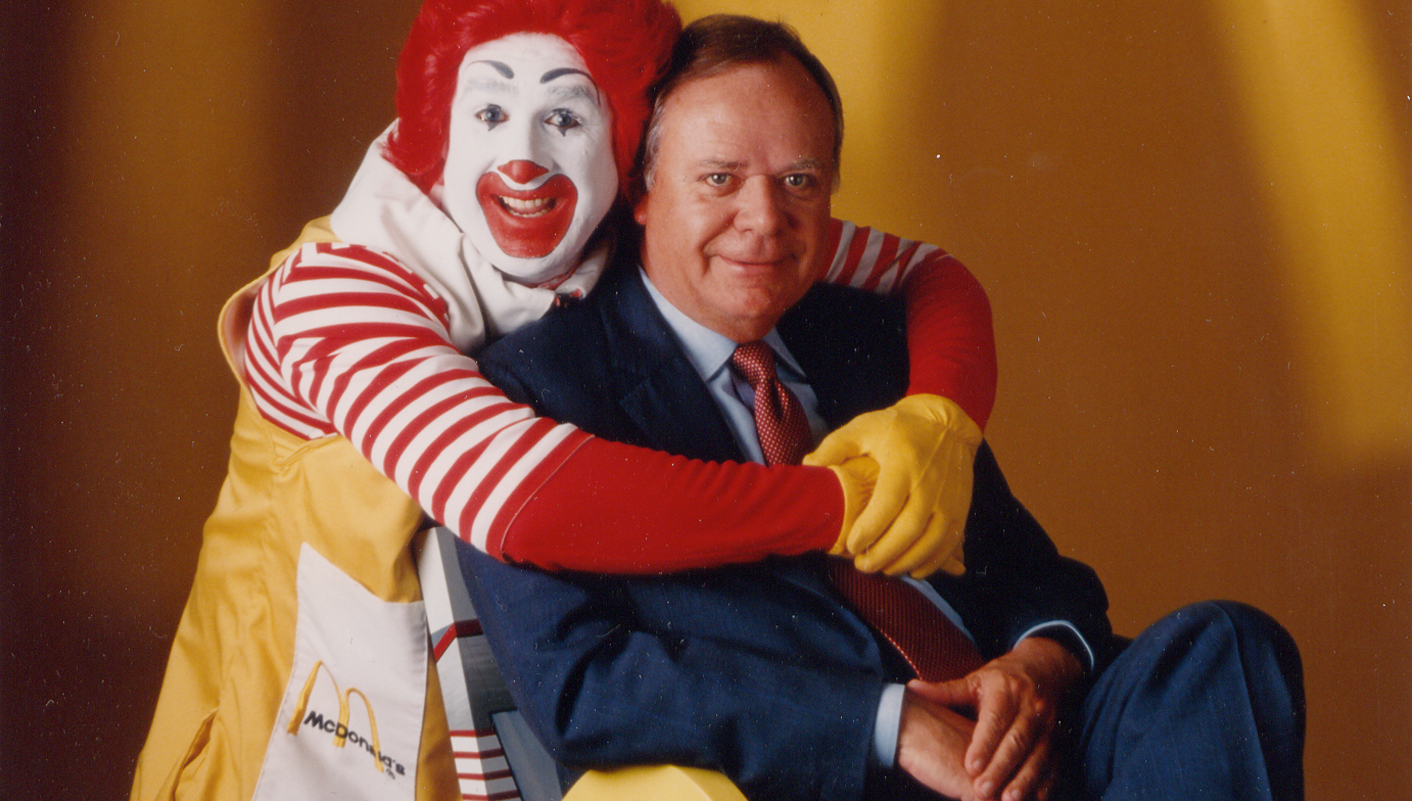 And before you even try to suggest that his soul deserves a perhaps eternal tour of duty in the nether regions of hell’s kitchen, just remember that millions and millions and millions of people find great comfort in the knowledge that the Golden Arches will always deliver precisely the same, err, gastronomic result, time after time, after time. J BROOKS SPECTOR tries to get ahead of the herd in his stampede for a degree honoris causa in Hamburgerology.

Back in September 2001, the writer and his wife were in Frankfurt Airport, waiting for a connecting flight to Johannesburg, outward bound from Washington, DC. As things had worked out, during our two-month break in the US, we had just spent virtually our last bits of ready cash, dollars or euros, and had just about maxed out our credit cards, and then, in Frankfurt, we suddenly had to purchase two new cages made to precise German specs so we could ship our two pet cats on to South Africa.

But the connecting flight was delayed, and as the hours stretched on, stomachs began to rumble. And so, eventually, there was no choice. The writer was off on an expedition, wandering through the airport to find something we could purchase with our final remaining euro coins and whatever miscellaneous small denomination US currency we had been able to dig out of forgotten side pockets and the depths of my wife’s purse. Suddenly, those oh-so-familiar golden arches (miniaturised so as not to disturb the design standards of the airport) beckoned. Now, if there is one thing everyone knows, those golden arches symbolise a universally consistent taste. Even before you have a single bit of McDonald’s food in hand, its taste and texture is already known – immutable, unchanging and identical, anywhere. And it is reassuring for that.

Our remaining currency was just enough to purchase two beverages and a couple of special Frankfurt Airport HasenfefferBurgers – for what seemed to be an early Oktoberfest commemorative meal from Mickey D’s. Well, okay, the writer’s knowledge of German was,  and remains, fairly rudimentary; limited primarily to classical music terminology or World War II movie commands like “Raus, Raus!”, “Mach schnell”, “Arbeit macht frei”. So off we went, back to our spot in the transit lounge with our last meal in Germany. It only became clear after biting into the curiously greyish meat with the ever so slightly gamy taste that this hamburger owed more to Bugs Bunny than anything else on the McDonald’s menu.

The thing of it is, we have all, all of us, all around the world, become totally clued into that guaranteed consistency from a McDonald’s that one’s taste buds already know what things will taste like – even before biting into them. Whether one is consuming them along Highway 202 in Pennsylvania, at Tokyo’s Ginza 4-Chome branch or on Orchard Road in Singapore, it is McDonald’s repetitive sameness that is the satisfying but guilty pleasure – unless the franchise holder has bootlegged in some ground Oryctolagus cuniculus, in deference to a local taste preference. (And yes, the writer is also aware that McDonald’s in India has yet to make the move to beef, this time in respect for local religious scruples.)

If McDonald’s got its start with Richard and Maurice McDonald’s “Speedee Service System” at their San Bernadino, California take-away burger joint in the early 1950s; and if it began its virtually untrammelled growth into the global behemoth of the food service industry under Ray Kroc’s tutelage; to a considerable degree what and how it served its products to its millions of customers took on their definitive shapes from the guidance of Fred L Turner, a man who passed away on Monday, 8 January at the age of 80.

Although Turner was largely unknown to most of the public outside the food industry, he was the key to the company’s menu and its management system. Joining in 1956, he was one of the earliest employees brought into the company by Ray Kroc (they were university buddies at Drake University), and Turner eventually rose to become the company’s CEO before retiring. Rising through the ranks, he became vice president for operations in 1958, president and chief administrative officer in 1968, and then chief executive in 1974, a position he held until 1987. He replaced Kroc as chairman in 1977 and then became senior chairman after Kroc died. Under Turner’s guidance, McDonald’s expanded its operations to over 31,000 outlets in 118 countries. Turner was the architect of the company’s “quality, service and cleanliness” mantra, an approach that locked in the company’s worldwide reputation as a welcoming, family-friendly destination. Along with everything else, Turner was a co-founder and life trustee of the Ronald McDonald House Charities, the institution that provides crucial support for families of critically ill children.
In his contributions to a distinctive American fast food cuisine, Turner was the creative father for the Egg McMuffin, Chicken McNuggets, the Happy Meal (that special bane of parents with small children who will always argue over who gets which toy) – and the Big Mac’s “Secret Sauce”.

Of course people have been making bacon and egg sandwiches for years, and a really oleaginous version of that item is a staple of South African takeaways and padkos. Turner’s particular genius seems to have been to switch sausage for bacon, add the cheese and then put the whole thing on an English muffin so it held together, rather than disintegrating into a shapeless, soggy mass before it could be finished. The sausage made it easier to chew on the run. After limited experiments, in 1975 the company put the Egg McMuffin on its national menu; breakfast sales soon rocketed and they never looked back again.

Then there was Chicken McNuggets. After the company had failed to turn the trick with any form of fried chicken, Turner’s flash of inspiration was to shape macerated, deboned chicken meat (hopefully) into little pellets and deep fat fry them so people could nibble them like a snack food or a side of French fries – and with all those different spicy, tangy, sweet and syrupy sauces. Generations of small children have happily scarfed down buckets of these nuggets – even finicky eaters.

But perhaps Turner’s piece de resistance was the original “Secret Sauce” he helped to develop for the Big Mac – that Russian dressing-like goo that makes a Big Mac a Big Mac. Without it, it’s just like anybody else’s big sandwich with two hamburger patties and some chopped salads, pickles and cheese. The story goes, that as the years went by, according to Big Mac-ian connoisseurs, the sauce had begun to lose its uniqueness, its zip, and its savoir-faire. Turner wasn’t able to remember everything in the recipe by himself, but, together with the original contractor who had first made it, they recreated the original composition of the sauce and with that intervention returned the Big Mac back to its place in the pantheon of fast food inventions.

Turner made one more enduring contribution, both to McDonald’s and to the fast food industry as a whole, his creation of Hamburger University. Really. Actually, the point of this was both stunningly simple and effective. By systematising the processes of running a McDonald’s restaurant for a would-be manager or franchise owner, Turner created a curriculum that could be learned and applied without the iffier trial and error learning process that still applies to most restaurant operations. Hamburger U became something like cross-breeding an intensive hands-on apprenticeship and military cook’s school together with a compact business management programme – with real money riding on a successful outcome.

Turner founded Hamburger University in the basement of a McDonald’s in Elk Grove Village, Illinois back in 1961. The first class brought together 15 students. Since that time, more than 80,000 restaurant managers, mid-managers and owner-operators have gone through the programme, which now instructs more than 5,000 students a year.

The Hamburger U campus at the company’s corporate headquarters was named after Turner in 2004. There are now Hamburger U facilities in Sydney, Munich, London, Tokyo, Sao Paulo, and Beijing to train a universe of McDonald’s managers worldwide. Graduates now receive “Bachelor of Hamburgerology” degrees upon successful completion of the programme. Really.

It is ridiculously easy to sneer at McDonald’s food, and decry its baleful impact on cuisines around the world, but as anyone who has wandered around Tokyo, Paris, Beijing or Moscow already knows, people line up everywhere to eat the foods that always deliver the exact same gastronomic result, time after time, even after billions and billions have been made and sold.

As proof, the writer offers this final vignette and tribute to Fred Turner. Some 35 years ago, the writer and his wife had just arrived in Singapore when the first McDonald’s on that island had been open for less than a week. There were mobs trying to get a Big Mac or two – and most of them were clearly not Americans desperate for a burger fix from home. Instead, they were local Singaporeans eager for a McDonald’s nosh.

As we waited to buy our hamburgers, a Filet-o-Fish, a Big Mac, jumbo fries and soft drinks, standing in front of us was an diminutive Malay grandmother, wearing her formal kain kebaya sarong and short-waisted blouse, smiling from ear to ear the moment she took possession of a bulging bag of McDonald’s hamburgers she could share with her grandchildren. Case closed. DM