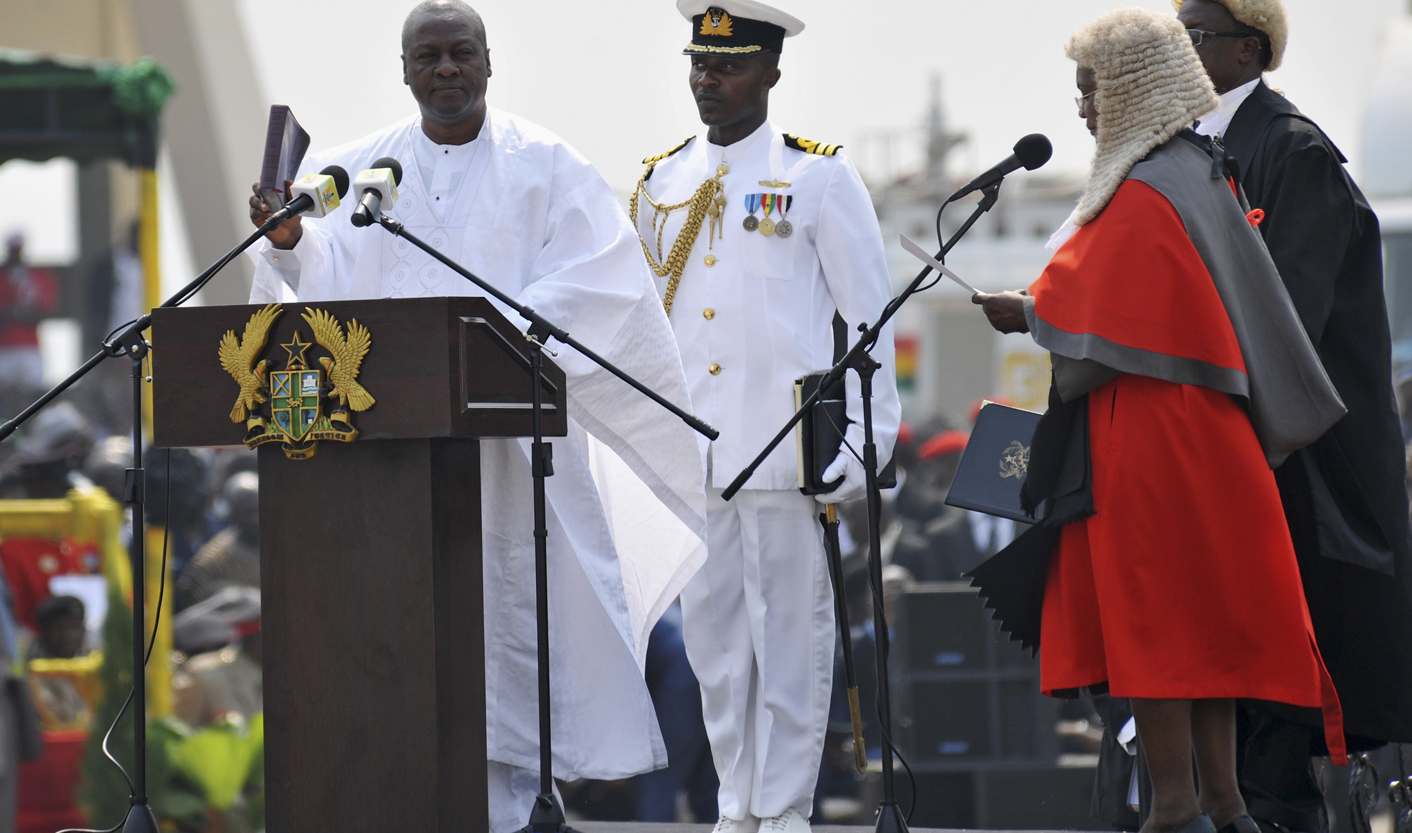 Ghanaian President John Dramani Mahama was sworn in again in a colourful ceremony in Accra on Monday. The new president was relieved to see a few friendly faces in the crowd, and gave an upbeat if not exactly inspiring speech. Ghana, he says, has a lot of work still to do – but is more than capable of doing it. By SIMON ALLISON.

At Accra’s imposing, majestic Independence Square on Monday, Ghana’s newly-elected President John Dramani Mahama addressed thousands of supporters and visiting dignitaries in a speech which was meant to set the tone for his presidency. A little earlier, Mahama, dressed in flowing white robes and with Bible firmly in hand, had been sworn in again as president.

Although Mahama is technically the incumbent, the unusual circumstances of his ascent to the top job – he took over in July 2012 after John Atta Mills died unexpectedly in office – means that this is the first opportunity he has to stamp his authority on the country, and the first time he’s been given the popular mandate to do so.

Even before he said a word, however, he would have been greatly reassured by the presence of a few important faces in the crowd. Continental powerhouses Nigeria and South Africa were both represented at the highest level, with Presidents Jacob Zuma and Goodluck Jonathan in attendance, while African Union chair and Benin president Thomas Yayi Boni was also there, conferring on Mahama’s new government all the international legitimacy it could need.

Not that Mahama is in need of international legitimacy. His election victory in the polls in December was narrow but convincing, and wholeheartedly approved by a range of international observer missions. Domestically, however, the new president is in a more difficult position as the defeated National Patriotic Party (NPP) has refused to accept the election results, and is fighting the issue through the courts. Although their challenge looks likely to fail, the NPP ordered their members to boycott Mahama’s inauguration, arguing – not unreasonably – that to participate in the showpiece event would undermine their cause.

Mahama also faced some dissent from within his own party in the run-up to the election, with highly influential former president Jerry John Rawlings opting to support his wife’s breakaway party over the party that Rawlings himself founded.

Nevertheless, Rawlings was there at Mahama’s inauguration, putting aside – at least symbolically – the high-profile differences between the two. And attending from the ranks of the opposition NPP, in direct violation of the boycott and despite his house being picketed by irate party members, was former president John Kufuor. Kufuor dismissed critics of his decision to attend as just “following [their] emotions,” and urged his party to focus on the court proceedings rather than worrying about the inauguration ceremony.

The presence of both former presidents should have done wonders for Mahama’s confidence ahead of his inauguration speech; court battles aside, they provide his administration with the domestic legitimacy it needs far more than international recognition.

In the speech itself, Mahama seemed to tacitly recognise this, ignoring foreign policy completely in favour of outlining his vision of where Ghana is going and how it will get there. “There is no denying the fact that in the past 55 years Ghana has made tremendous gains, but there is also no denying the fact that Ghana is still a young country and every young country goes through its share of instability and difficulty as it struggles to find the direction toward permanence,” he said. He promised to create jobs and build infrastructure, to invest in agriculture and find lasting solutions to the problems around providing power, water and sanitation.

In a minor betrayal of his socialist roots, Mahama stressed the ability of each individual to make change. “Complacency and frustration can entice us into believing that we are insignificant players stuck somehow in the background of a bigger picture, or that we are incapable of making a difference. But history itself has proven that nothing could be further from the truth.”

For history, Mahama tellingly referenced the legend of Tetteh Quarshie. Quarshie was a young blacksmith in the late nineteenth century, who left Accra to work on an island that now belongs to Equatorial Guinea. On his return home, he smuggled a few cocoa pods back with him. The pods didn’t grow well in Accra, so he traveled away from the coast and tried again. This time, they flourished, and so began Ghana’s long and lucrative history with cocoa. The country is the second largest producer of cocoa in the world, while West Africa with its cocoa-friendly climate produces some 75% of the world’s cocoa.

But Quarshie’s legacy – at least as far as Mahama is concerned – is not that Dairy Milk you promised to give up at New Year’s. His actions (assuming the legend is completely true, which for the purposes of political point-making it is) single-handedly rescued his country’s stagnant economy and altered its destiny, forcing Ghana to modernise and pushing it into the next level of development. This is relevant now because Ghana is on the brink of a similar century-defining, economy-revolutionising development: the full-scale production of significant off-shore oil reserves. How Ghana handles its new oil money will likely determine the course of its next century, just like cocoa determined – at least in part – the last century.

As Ghana’s first oil president, Mahama will set the tone of the engagement between Ghanaian politicians and oil. The significance of this is perhaps why this election was so bitterly fought, and continues to be so (not that Mahama mentioned oil once in his speech; the subtle Quarshie metaphor was as close as he came to addressing the issue).

“This is our country. This is our moment; Ghana’s time, once again, for greatness,” concluded Mahama at the end of the 90-minute ceremony. Let’s hope he’s right. DM

Photo: Ghanaian President John Dramani Mahama (L) takes the oath during his inauguration ceremony at the Independence Square in Accra January 7, 2013. Ghana’s opposition boycotted the inauguration of President Mahama on Monday, ignoring his appeals to end a dispute over last month’s election in the West African state seen as a model democracy in the coup-prone region. REUTERS/Stringer