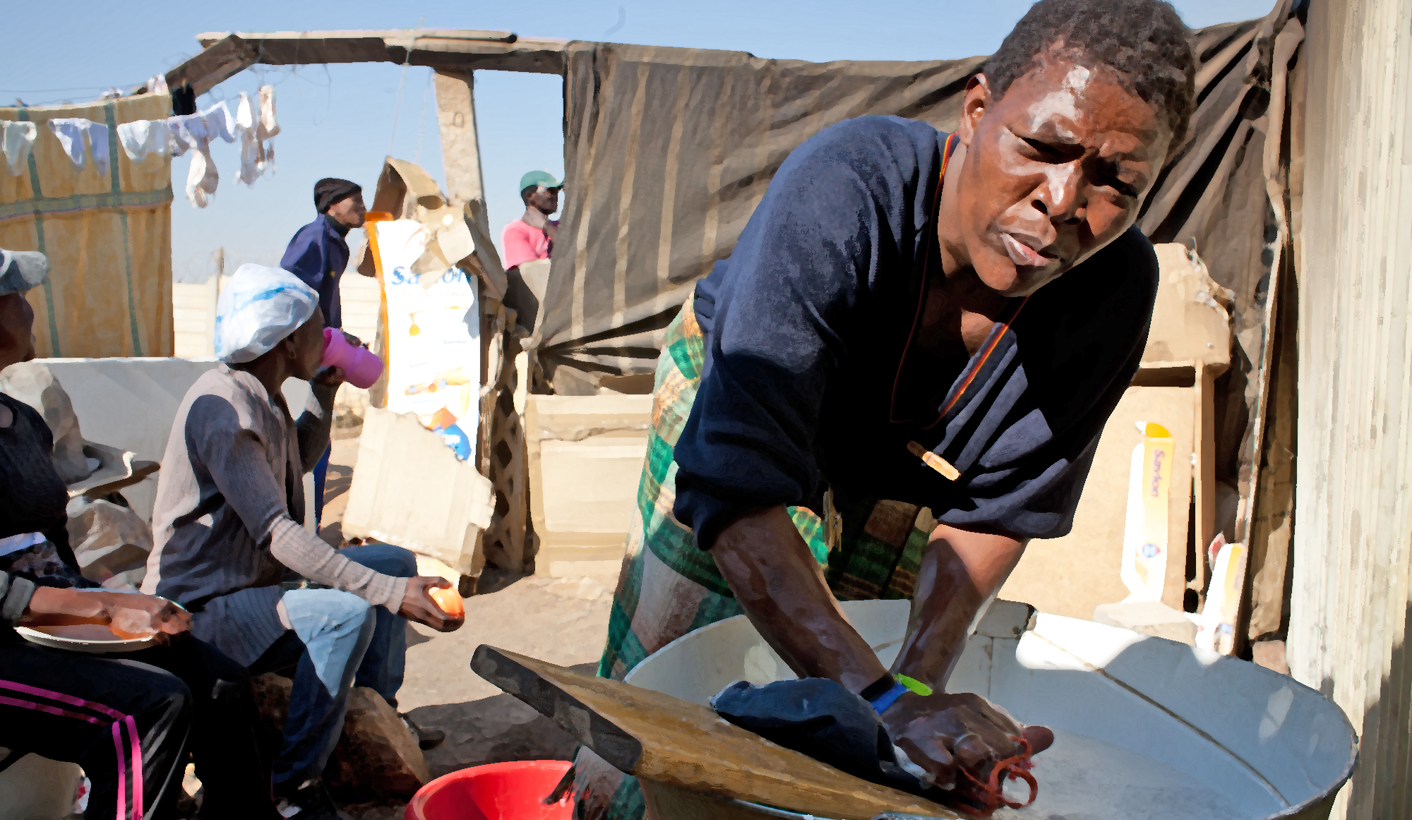 As the new year gets underway, I remember those who lost or fought for their dignity in 2012. Despite the advent of democracy, dehumanisation and indignity remain systemic and widespread. If 2013 is going to usher in new solutions, we have to stop turning our heads from the harsh reality of many South African citizens.By GREG NICOLSON.

Cindy Dubazane walked across the road alongside burnt-out tires. “We don’t trust him,” she said, while then-Gauteng MEC Humphrey Mmemezi insulted protestors from Zandspruit informal settlement. Twelve hours after they blockaded Beyers Naude Drive, he was responding to their memorandum. Mmemezi told them they were criminals and foreigners and he wouldn’t work with their leaders. “You can’t tell me everyone here is a criminal,” said Cindy.

Just out of her teens and completing matric, Cindy came from a family involved in community organisation. In jeans, boots and a jacket, her face with subtle makeup, she looked like any other girl at the nearby Northgate mall. But she had grown up in the squatter camp. “I’m studying for matric by candlelight. I don’t want my kids to also be studying by candlelight,” she said on that June day. Like other residents, she wanted Zandspruit’s streets, running with fetid water, fixed. She wanted a house instead of a shack. “We have a right to these services and we have to do something to get them.”

After Mmemezi left and when police finally tried to break up the crowd, the stone throwing continued. On the receiving end of rubber bullets and teargas, some protesters retreated into the shopping centre car park. There they looted two stores – the PEP clothing and the liquor store. The next day, once cars could finally pass, weaving between concrete bins, broken bricks and piles of ash, Cindy overlooked the damage. She said it wasn’t right that the protest descended into illegal acts, but when youth are so desperate, with no hope of change, this is what happens.

That weekend, at her brother’s 21st birthday party, Cindy was stabbed and died on the way to hospital.

Her mother, Thobile Dubazane, was bereaved but stayed involved in local politics through the South African National Civic Organisation (Sanco). When, months later, Daily Sun published a story on mob justice in the area and continued to give Zandspruit attention to correct its initial story, police appeared under pressure and rounded up Sanco leaders. The Tactical Response Team came for Thobile and a male officer forced her to get changed in front of him. “He told me to dress like I was going to a beauty contest… I was humiliated,” she told me at the time. They bruised her with the barrels of their R5s before locking her up and then releasing her uncharged.

Ayanda Ndandaa’s trouble with the police started when they evicted him from his Johannesburg flat. The 39-year-old’s year ended on the streets of Johannesburg, living under a bridge without his possessions. Around 40 people were left homeless when a new building owner wanted them out. The families moved to the middle of a nearby road. They had no direct access to electricity, sanitation services or running water. “HOMELESS HELPLESS” someone had chalked on a concrete pole. Like countless families I met in 2012, they had nowhere to go and no one to help.

Working through 2012, the stories of dignity lost or denied, dehumanisation, and disrespect for life were as common as the political reports leading up to the ANC’s Mangaung conference. These are just a few that stuck with me. But we were reminded of the living conditions of workers and the state’s response to protests through the Marikana massacre and farm workers’ strike. Rapists shared videos of their acts. We know police abused their positions and abused those in custody. People stood on the curb clutching their belongings after being forcefully evicted from their homes. Children continued to use bucket toilets at schools. Reports of racism rolled on. Again and again, we were reminded of communities stuck in squalor.

Democracy has hammered away at the system of oppression that denied a majority of South Africans their dignity while protecting white power and wealth. It’s given many people the faith that their children cannot only imagine a better future but have the ability to achieve their dreams. But for others, dignity remains the dream.

What is to be done? In his Nobel Peace Prize acceptance speech, Chief Albert Luthuli spoke of the resilience of South Africans. “The people of South Africa have never been a docile lot, least of all the African people. We have a long tradition of struggle for our national rights, reaching back to the very beginnings of white settlement and conquest 300 years ago. Our history is one of opposition to domination, of protest and refusal to tyranny.”

He mentioned Shaka, Hintsa, Moshoeshoe, and those who first migrated to Southern Africa. “They endured it all. They settled in these parts of Africa to build a future worthwhile for us, their offspring. While the social and political conditions have changed and the problems we face are different, we too – their progeny – find ourselves facing a situation where we have to struggle for our very survival as human beings. Although methods of protest may differ from time to time, the universal human strivings for liberty remain unchanged.”

The social and political conditions have changed again and the categories of oppositions have been blurred. The government is democratically elected and while the ANC has its failings, it is not tyrannical. But the struggle for dignity and rights continues.

Before defining the form of this new, yet ongoing, struggle, we have to challenge the blithe disregard for indignity. While South African families live under a bridge in downtown Joburg, many of us drive or walk past more moved by the song on the radio than the plight of our fellow human beings. If no one spares a thought for the young girl on her period under the bridge with nowhere to change her pad; if no one considers the emasculated man who feels he can’t provide for his family and has to relieve himself in public around the corner; if no one thinks of the pregnant woman who will go into labour on the street, what chance is there of working on a solution?

What next? The government has a long-term plan to steer the country and reduce poverty and inequality, but the current leadership has not shown the concern or ability to meet effects of these crises are having on individuals and communities. Some civil society organisations are fighting injustice, but they are too few and too stretched.

Perhaps what we need in 2013 is mass mobilisation against the indignities plaguing society. It could shift public discourse and force the state to change its approach to some of the problems in the complex web of injustice.

This year, citizens who work, love their families, pay taxes and have hopes for a better future will feel reduced as human beings. Their basic rights will be violated and lives will be taken for less than it costs to fill up a tank of petrol. Survival will be their main concern and dreams will feel abstract and unachievable. For 2013, I wonder who will be de-sensitised and who will empathise. And I wonder who will overcome despair and do something about the challenges. DM