Riches in niches: U.S. cops, in-flight movies may be model for Panasonic survival 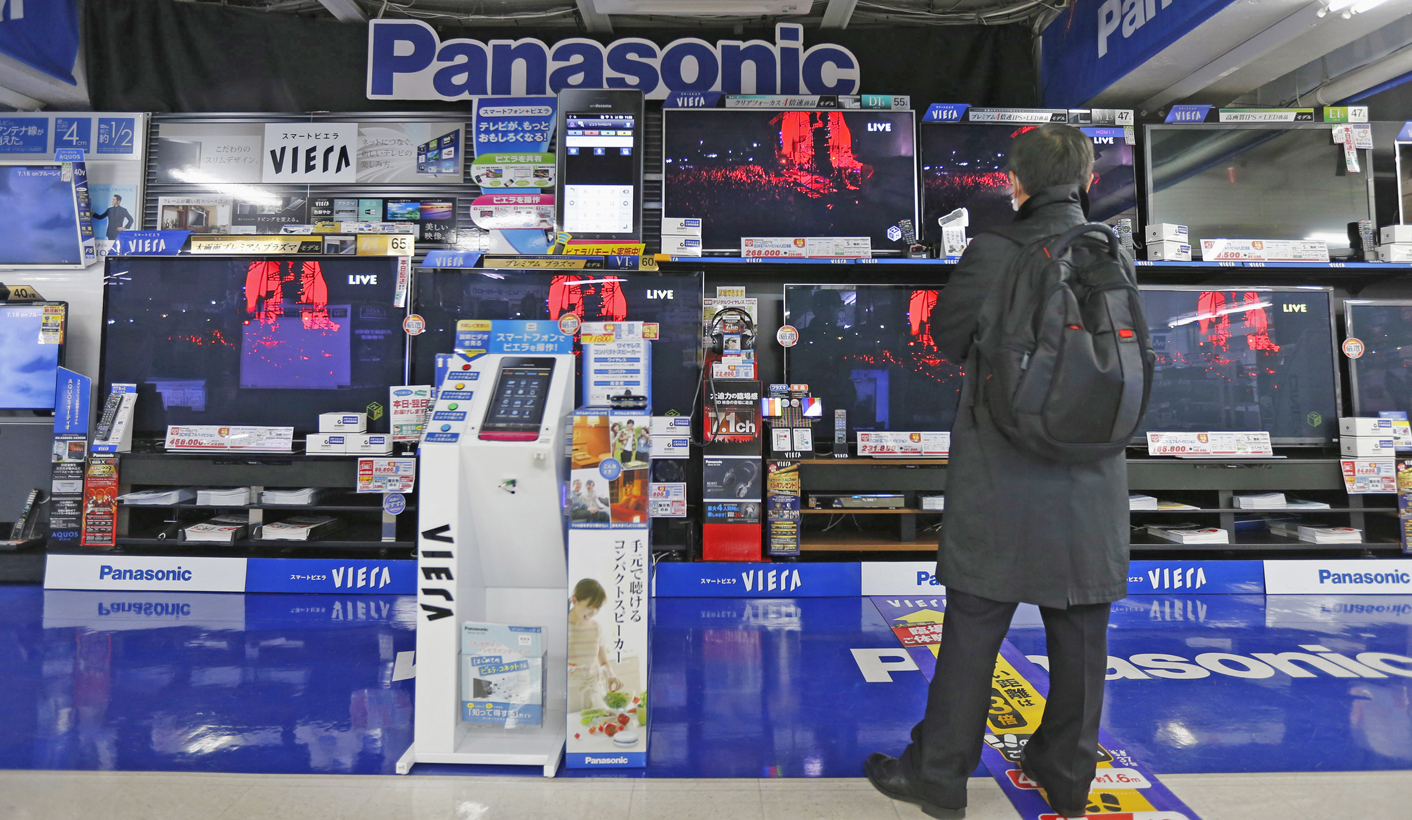 Panasonic Corp's answer to the brutal onslaught on its TV sales may be in a product the Japanese firm launched 17 years ago and which is a must-have for U.S. police cars. By Tim Kelly and Reiji Murai.

Two thirds of the 420,000 patrol cars in the United States are equipped with the company’s rugged Toughbook computers, and Panasonic chief Kazuhiro Tsuga sees the niche product as a model for how the sprawling conglomerate can make money beyond a gadget mass market increasingly dominated by Samsung Electronics and Apple Inc.

“What we need are businesses that earn, and they don’t necessarily have to have big sales,” Tsuga told reporters after his appointment as company president was approved in June.

Panasonic, Sony Corp and Sharp Corp have been hit hard by South Korean-made TVs, Blu-ray players and mobiles and Apple tablets that threaten to wipe out Japan as a global consumer electronics hub. The Toughbook, sold only to businesses and governments, was conceived as a response to the type of profit sapping competition that is now roiling TVs.

“At the time, we were losing in personal computers to Compaq and IBM,” said Hide Harada, who heads the Toughbook unit from the group’s headquarters in Osaka, western Japan. IBM later sold its laptop business to China’s Lenovo Group and Compaq was absorbed by Hewlett Packard.

“It was a guerilla strategy,” Harada said, recalling the Toughbook’s launch in 1996. Panasonic’s promotion campaign included driving jeeps over its computers, dropping them on the ground and dousing them with coffee on morning TV shows.

At rival Sony, too, signs of a niche strategy are emerging in a battle with Apple and South Korean brands that are making gains from a weaker won currency. Combining technologies from several divisions – from projectors to video cameras and headphones – Sony’s 3D Viewer head-mounted visor gives users the feel they are sitting in the middle of a 500-seat movie theater.

The target audience, says product manager Hideki Mori, are those consumers looking to immerse themselves in computer graphics and high quality movies. “Demand has been greater than anticipated,” he said, declining to give specific sales numbers.

The two Japanese firms will show off their wares at this week’s annual CES consumer electronics show in Las Vegas, an event usually dominated by prototypes for next-generation TV technology. Tsuga is due to deliver the event’s keynote speech.

In the past, the Japanese have showcased ultra high-definition 4K televisions, while Samsung and LG Electronics Inc have displayed their ultra-thin OLED (organic light-emitting diode) screens. But, at a price tag likely 10 times that of conventional LCD screens, consumers will take a while to make the generational leap.

Meanwhile, losses at Panasonic, Sony and Sharp mount up. Panasonic has predicted a net loss of $8.9 billion in the year to end-March, while Sharp, which has been bailed out by banks, expects an annual loss of $5.24 billion. Helped by asset sales, Sony should eke out a small profit.

Japan’s share of the flat panel TV market has shrunk by around a quarter in the past two years, to around 31 percent, according to the Japan Electronics and Information Technology Industries Association. Amid a prolonged strong yen squeeze , the industry lobby expects Japan’s share of the DVD and Blu-ray disc player market to have dropped to around half last year from nearly two-thirds in 2010. Just 8 of every 100 mobile phones sold globally are now Japanese. Manufacturers have shifted TV production overseas, with output in Japan now less than a tenth of what it was two years ago.

Tsuga, who acknowledges Panasonic is a “loser” in consumer electronics, has warned his business units they will be closed or sold if they fail to match Toughbook’s success, giving each two years to deliver at least a 5 percent operating margin.

Any niche-winning strategy that takes his company away from mass market products means Tsuga will need fewer workers, investors say. Panasonic is Japan’s biggest commercial employer with a workforce of more than 300,000. It plans to axe 10,000 jobs in the year to March on top of the 36,000 that were cut in the previous year. More big cuts in Japan, where major lay-offs are uncommon and severance packages expensive, won’t be easy, said Yuuki Sakurai, CEO at Fukoku Capital Management in Tokyo, which manages assets worth $18.4 billion, but doesn’t own Panasonic stock.

“It’s like trying to chase the course of a battleship. If they want to become a light cruiser or destroyer, they’ll have to lose employees,” Sakurai said.

Workers Panasonic will likely keep are those in Kobe in western Japan who build the Toughbook PCs – a category defined by a U.S. military quality benchmark that serves as a de facto global standard. Its market share is on a par with Apple’s in tablets, with most U.S. police departments willing to pay as much as $3,000 for the rugged laptops which can withstand bumpy high-speed chases and other rigours of street policing.

“They have been near bullet-proof. We had a patrol car catch fire and after all the heat, smoke and water dissipated the computer continued to function,” said Bill Richards, logistics commander for the Tucson police in Arizona, whose force owns close to 650 Toughbooks that connect patrol cars with dispatchers, license records and other police databases.

Other customers include the New York Police Department, California Highway Patrol, Brazilian Military Police and British and U.S. military, which use them on unmanned aerial drones.

“Panasonic is the bellwether, the most recognized brand. The Toughbook is almost synonymous with rugged notebooks,” said David Krebs, a vice president at VDC Research.

While margins in the global PC market are getting slimmer – research firm IHS iSuppli sees annual sales growth of around 7 percent over the next four years from about 216 million PCs last year – the premium-price, fatter margin, rugged PC niche is seen growing by around 10 percent a year to nearly 1.2 million computers by 2016, according to VDC Research.

At the Kobe factory, Toughbooks are put through their paces: hosed down to test water resistance, baked to 50 degrees Celsius, chilled to minus 20 degrees and dropped on their tops, bottoms, sides and corners.

Harada describes it as an analog edge in digital products.

“Whoever makes them, the insides of a computer are pretty much the same. It’s the mechanical side that makes us different,” he explained.

The creators of Sony’s 3D Viewer, too, are looking for mechanical appeal as much as electronic prowess. A second, redesigned model, which is now on sale in Japan, is 25 percent lighter at 330 grams, has a better grip and gives users the option of headphones or earplugs, said Mori. “We want to make it lighter,” he added, noting engineers are looking to slim down the heaviest component, the lenses.

While Sony keeps chasing consumers, Panasonic is pursuing a business-to-business niche market model that Tsuga has put at the heart of his revival plan. High on Harada’s target list for the Toughbook are Japanese police forces, which don’t yet buy the computers.

There are no plans, he said, to make cheaper mass market models – which could protect some jobs in the group.

“We aren’t going to put it in Best Buy or Walmart. I don’t think it would turn out well.” DM