L.A. confessional: Is Armstrong about to come clean? 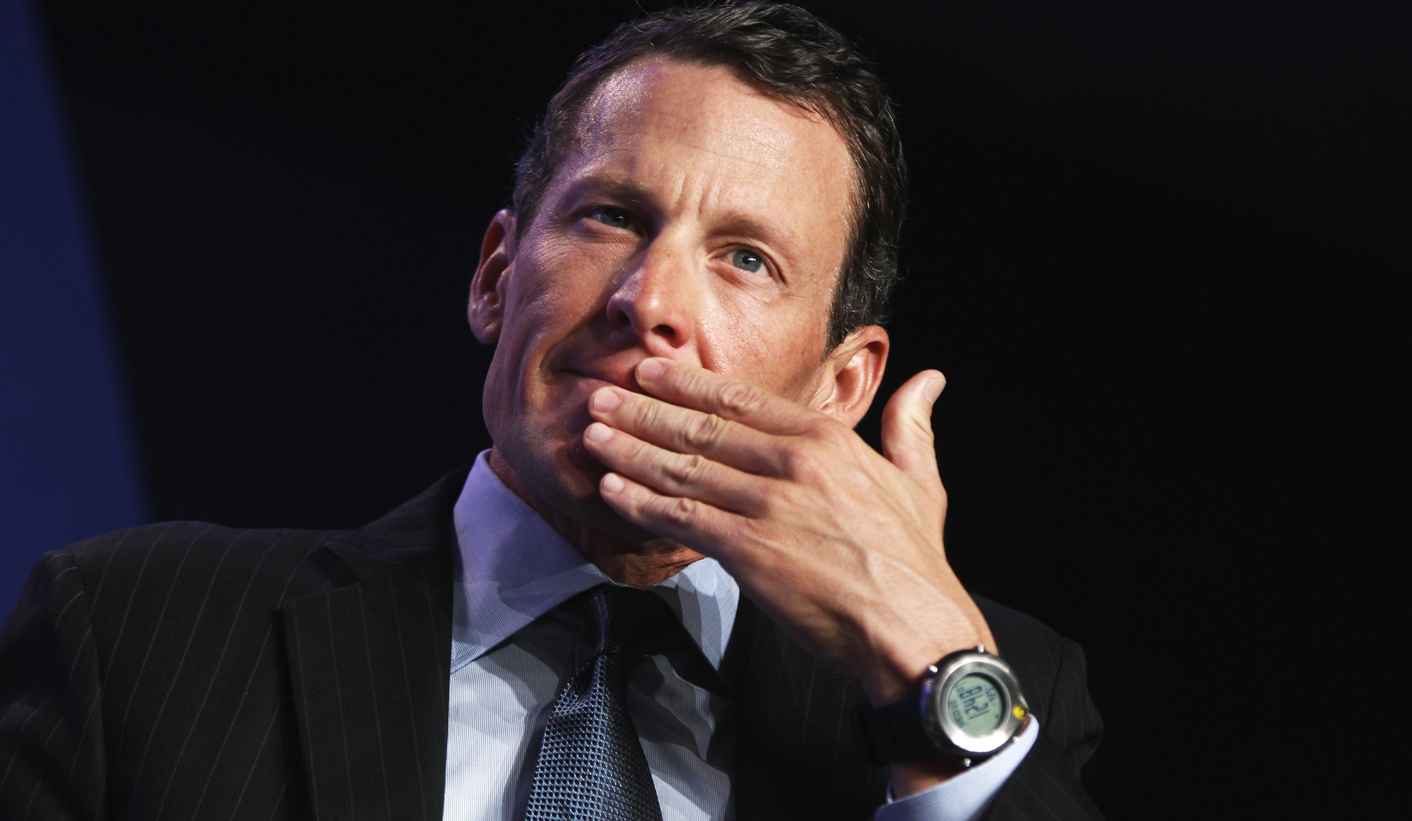 South Africans were this week once again reminded that cycling is a deadly sport. The death of 25-year-old mountain biking luminary Burry Stander, killed in KwaZulu-Natal by a minibus taxi, has sent the sport into one of its periodic tailspins. Just as the news of Stander’s death was breaking, the New York Times reported that Lance Armstrong might be maneuvering to come clean. The two incidents are related – to a surprising degree.  By RICHARD POPLAK.

One of the less salutary facts to emerge from the United States Anti-Doping Agency’s 1000-page so-called “Reasoned Decision” document, which minutely detailed the doping conspiracy that defined Lance Armstrong’s sporting career, is just how little regard is paid to the lives of young cyclists. No other sport places athletes in more physical peril – not NFL football, not MMA cage fighting, nothing.

And yet, 21-year-old boys paid to fling themselves down mountains at 120km an hour were cajoled into injecting themselves with high-tech cancer drugs in order to hand water bottles to multimillionaire superstars. This is a disgrace that the cycling community has yet to come to terms with. The sport needs some moral closure – and the only person who can provide it is somewhat reluctant to do so.

One of the reasons that sporting agencies exist is to protect professional athletes from making terrible decisions. After the deaths of Roland Ratzenberger and Ayrton Senna in 1994, Formula One racing – as corrupt and sleazy a sporting body as any – made sure that safety standards were increased, and that drivers’ lives were no longer disposable. Not one F1 driver has died in a race since.

When the young Belgian Wouter Weylandt died after a crash in the 2011 Giro d’Italia, it was just another day on the bicycle. The International Cycling Union (UCI), made not one single safety alteration, all but guaranteeing that there will be more deaths in Grand Tours to come. “Quite frankly, on the level of athletes putting their safety on the line for a sport, the American macho sports like football and other typical ‘guy sports’ are a joke,” said Jonathan Vaughters, Garmin-Sharp’s manager. “The perception is that bicycle racing is cute and fun and, ‘look at all the pretty coloured jerseys going down that mountain pass,’ but it’s an unbelievably brutal and dangerous sport with no margin for error.”

Exactly. Which is why it would be nice if young pros like Weylandt, who compete in the most dangerous sport in the world at the best of times, weren’t pressured into taking dangerous performance enhancing drugs – word on the street is that methamphetamines are currently in vogue in cycling circles. That can only properly happen when there is some closure to the biggest sporting controversy of all time –that of Lance Armstrong, and his legacy as a drug cheat.

Shortly before a New York Times story titled “In Reversal, Armstrong Is Said to Weigh Admitting Drug Use” broke on 4 January, those who follow cycling closely noticed that something was afoot in Lanceland. On 2 January, Armstrong Tweeted a link to a blog belonging to a photographer named Graham Watson. Watson doesn’t have much of a profile in cycling circles, and the piece treats our protagonist as gently as he could ever hope for:

“[I]f Lance did what he’s been accused of doing, then that’s his issue to deal with. All I do know is he’s not the manipulative ‘bully’ certain members of the media have tried to portray him as in their tabloid stories. He was ambitious, ruthless, highly talented, tough, he knew how to lead his teammates and intimidate his rivals to make sure he won. But is he any different from a president, an army general, a corporate leader of industry, a career politician, or any other sporting great?”

So far, business as usual. But keeping in mind that Armstrong’s Tweet seemed designed as an endorsement, the following paragraph raised some eyebrows:

“Outright angels do not win a Tour de France. That is the domain of the most talented, hard, driven, ruthless and selfish riders. Lance did what he had to do to win, and he clearly did it very well. If he cheated, he cheated the other cheats of that era, even if by doing so he also cheated an adoring public. He didn’t kill anyone along the way, and as a father of five, he’s no child molester either. For me, his punishment outweighs the alleged crimes, for a lifetime ban from all sports seems quite draconian in this day and age … The pureness of sport is worth protecting. Except that its very spirit encourages cheating, for at the upper echelons there’s too much fame and fortune that comes with such a pure and simple thing as winning.”

In other words, Watson is another Armstrong apologist. But embedded in all the sophistry and non-sequiturs is a tacit acknowledgment of the fact that Armstrong doped. For Lance himself to have shared this article represented a shift in tactics.

Two days later, we learned through some carefully protected sources that Armstrong had taken time out of his busy Tweeting schedule to tell friends and anti-doping cops that he is considering going public with an admission. In order to do so and stay out of prison, Armstrong and his lawyer Tim Herman – who probably has a monthly retainer that matches the annual GDP of Rwanda – would have to do some fancy footwork.

First, there is the not inconsiderable issue of Britain’s The Sunday Times suing him for $1.5 million, after he won $500,000 in the libel case that resulted from the paper publishing extracts of L.A. Confidentiel: Les Secrets de Lance Armstrong. The Texas-based insurance company SCA also expects $12 million, after Armstrong and Co. sued it for withholding bonus payouts in 2005, and were forced to settle for $7.5 million. Those, and other suits that will follow a confession like brush fires, will need to be paid up from Armstrong’s reported $125 million war chest – a lot of dough, but by no means a bottomless well. (See: Herman, Tim.)

Then, Armstrong has to consider the very real possibility of doing some hard time. There is the federal whistleblower case, in which Armstrong and several other conspirators are accused of defrauding the US government by allowing doping on the legendary Postal Service team. According to the New York Times piece, Armstrong has sniffed out both Travis Tygart of USADA, and David Harmon, director general of the World Anti-Doping Agency. Both Tygart and Harmon are after bigger fish than even Armstrong – the drug pushers and producers that he worked with so closely. An admission would necessarily include him ratting out his co-conspirators, and the tantalising possibility that UCI heads Pat McQuaid, and the much-loathed honorary president Hein Verbruggen, would be accused of accepting payment from Armstrong for their silence regarding a positive drug test in 2000.

An Armstrong admission could bring the whole UCI tumbling down, and with stand-up ex-champions like the American Greg LeMond waiting to pick up the pieces, it could mean some real changes for the sport. The pressure to confess probably comes from well-healed Livestrong donors, who know the value of a well-placed confession, and understand the American public’s almost poignant willingness to forgive a star his worst transgressions.

What’s more, and brace yourself for the sheer chutzpah – Armstrong wants to get back to the business of racing. He was doing splendidly in triathlons before his lifetime ban was invoked, and there is no doubt that even without the benefits of the world’s best drug cheat programme, he could do some damage to the established pecking order. This would undeniably be good for multi-sport’s profile, and could bring in bigger endorsements and broadcast deals, especially after Armstrong weeps in Oprah’s arms on live television.

It would be some years before a chastened Armstrong was allowed to compete again, assuming the USADA revokes his lifetime ban after all. It’s a carrot that they need to dangle, because if the sport is to become safer and cleaner, it must be wrested from the hands of McQuaid and company, and handed over to someone like LeMond. Only then can parents consider allowing their kids anywhere near a competitive bike race.

Armstrong’s admission won’t bring Burry Stander back. It won’t bring Wouter Weylandt back, and it won’t bring back the half-dozen professional cyclists who are killed on the roads every year. But it will usher in an era of respect for the bodies of these young athletes, and era in which cycling’s organisational agency acts with moral clarity and decisiveness.

The sport is dangerous enough, and the likes of Travis Tygart can’t protect us from speeding taxis. But if cyclists learn to care about themselves, perhaps others will follow suit. And future generations will be safe from both vehicular homicide, and the likes of Lance Armstrong, a sociopathic drug cheat who used callow young men to feed his insatiable hunger to win at all costs. DM