Daily Maverick’s SA Persons of the Year: The victims of Marikana 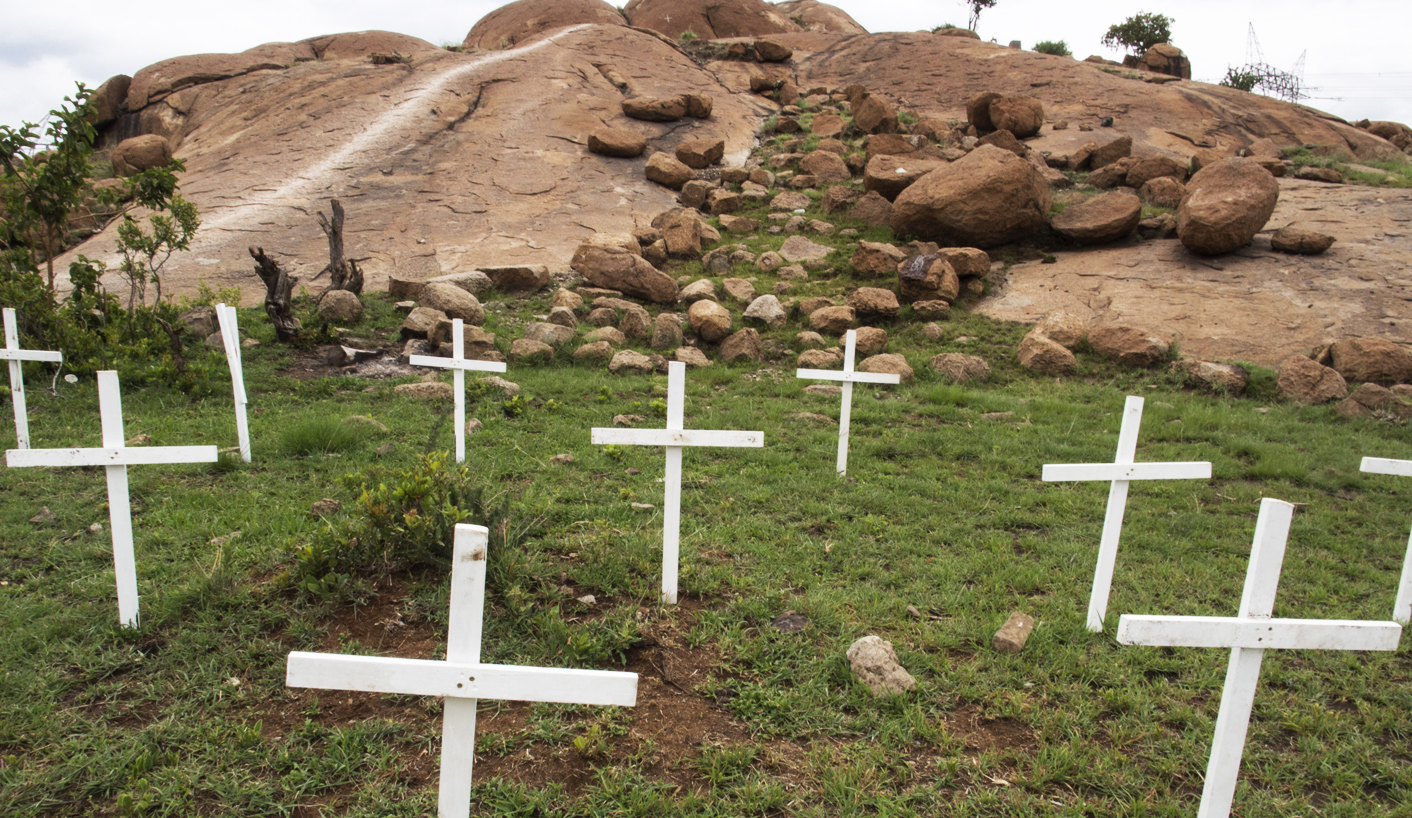 If South Africa had to be personified in 2012, it could be a school child in a rural school in Limpopo without essential learning material. It could be an ANC member fighting to be among the privileged few in Mangaung who will determine our destiny. It could be Nelson Mandela: sick, frail and too weary to say what ails him. But South Africa is best personified by what came to define 2012 as the year of disgrace: the dead of Marikana, all 47 of them who died brutal, violent deaths. They represent our collective shame in the year that was 2012. By RANJENI MUNUSAMY.

“The era of procrastination, of half-measures, of soothing and baffling expedients, of delays is coming to its close. In its place we are entering a period of consequences.”

Winston Churchill spoke these words in the House of Commons in November 1936 in the aftermath of Germany’s reoccupation of the Rhineland. All Britain had to do at the time was commit to provide diplomatic support for a French counterattack to prompt a German retreat. Britain did not make the commitment. The consequences are now a matter of world history.

We have entered our own period of consequences.

A dithering government, a political set more interested in the accumulation and retention of wealth and power than the lives and welfare of their people, a nation with a violent past caught up in a waiting game for progress that is not coming, millions of desperate and disillusioned people with no way out of their lives of despair.

A dangerous nexus, a toxic mix waiting to combust.

Rage and turmoil have been boiling over in communities across the country for years, unheeded as the battle for political power continues to hog centre stage. Most fatefully, it is the shocking failure of leadership at all layers of society that has roused a sense of desperation, and with it, rebellion.

Marikana became the first major consequence. It was the consequence of lesser humans realising that they have nobody but themselves to rely on to escape their hopeless lives and subhuman working and living conditions. And so they revolted in an extraordinary wildcat strike that held a major multinational mining company hostage, threatening profits and privilege. The workers went to war with their union, with their company Lonmin and with their way of life. They did so in some awful ways: they killed people, they threatened the safety of others, and they bit the hand that fed them the scraps they survived on.

For that, 34 of the workers paid the ultimate price. They were slaughtered in cold blood by the protectors of our society. Seventy-eight others were injured and 270 workers were held in custody for the deaths of their fellow workers, also by the upholders of law and order. Many of them were tortured and harassed by the police.

In a bizarre attempt at explaining or justifying the slaughter, it has been proffered that these were thugs, armed with lethal weapons intent on killing others. And the action against them therefore needed to be commensurate – concomitant in Cyril Ramaphosa’s parlance.

An eye for an eye became 34 miners’ lives for that of two policemen. Such is the imbalance of the value of human life in a country which holds up the pretence that we all have the same right to life.

Some feel the workers should not be mourned; that they deserved to die like they lived, in indignity. Some, like National Police Commissioner Riah Phiyega, go as far as laughing at the grief of the widows. Some feel that only some among the dead are victims – the policemen, the security guards, the National Union of Mineworkers leader Daluvuyo Bongo or the ANC councillor Paulina Masuhlo.

But all 47 people who died at Marikana lost their lives due to a multiple failure of the institutions around them – the unions, Lonmin, the police, the government, the ANC and civil society. They became players in a web of iniquity where human life was counter-posed against the price of a precious metal. Platinum proved to be the more valuable commodity.

Perhaps the commission of inquiry into the massacre will provide some of the answers as to what prompted the collision of circumstances that led to the now unforgettable images of mineworkers falling into the dust in a fusillade from a wall of heavily armed policemen. But it can never undo the horror and brutality that has ripped the fabric of our society, or heal the open wounds of the tormented community of Marikana. They remain there, living on the scene of the crime, haunted and anguished daily by the injustice of the events that played out.

“We might not be educated, but we understand politics… and in politics people do not die as they did in Marikana.” These are the words of “Bhele” Tholakele Dlunga, a survivor of the massacre and police torture, and a face of the tragedy of Marikana. Bhele, like many other people living in Marikana, is horrendously scarred but understands that what happened to him and friends and co-workers is not normal.

It really isn’t. And yet South Africa is willing to leave them behind, to mourn, to be witnesses to the brutality visited on them, and to go back to their sub-human lives.

We are now at the furthest point from where Nelson Mandela left his nation when he went into retirement. We have turned on each other and we fail to feel each other’s pain. And we are willing to leave our fellow citizens face down in the dust of the prized platinum belt, their blood spilt in vain.

It is the ultimate betrayal of the legacy of our founding father, who taught us how love, reconcile and forgive. We are desperately trying to hold on to him, willing him to stay with us, and yet we are nothing of what he wanted us to be.

In 2012, our school children who did not get textbooks and who received a sub-standard education were failed. The country became enraptured by a circus around a painting of President Jacob Zuma with his genitals exposed. The ANC and alliance leaders took to the streets to have it banned, yet the same set of people were subdued during the agony of Marikana.

The eyes of the world turned to us as the mining and farming industries erupted, causing our economy to convulse. We faced international ratings downgrades and harsh scrutiny from the international media. The ANC reached its centenary and went to war with itself in a high-stakes power battle.

But Marikana was the seminal event of 2012 and post-democracy South Africa. It is the end of the innocence and the start of a period of consequences. We will never be the same. The 47 victims of Marikana will forever be a reminder of this.

Photo:  The miners of Lonmin erected 36 crosses at Thaba, or the Koppie. to represent the 34 miners killed by police on August 16th, 2012, and the other two crosses represent the two parents who died on hearing of their sons’ deaths in the massacre. Marikana, North West Province, South Africa, Dec 1, 2012. (Greg Marinovich)