Winnie, the missing Soweto youths and the NPA 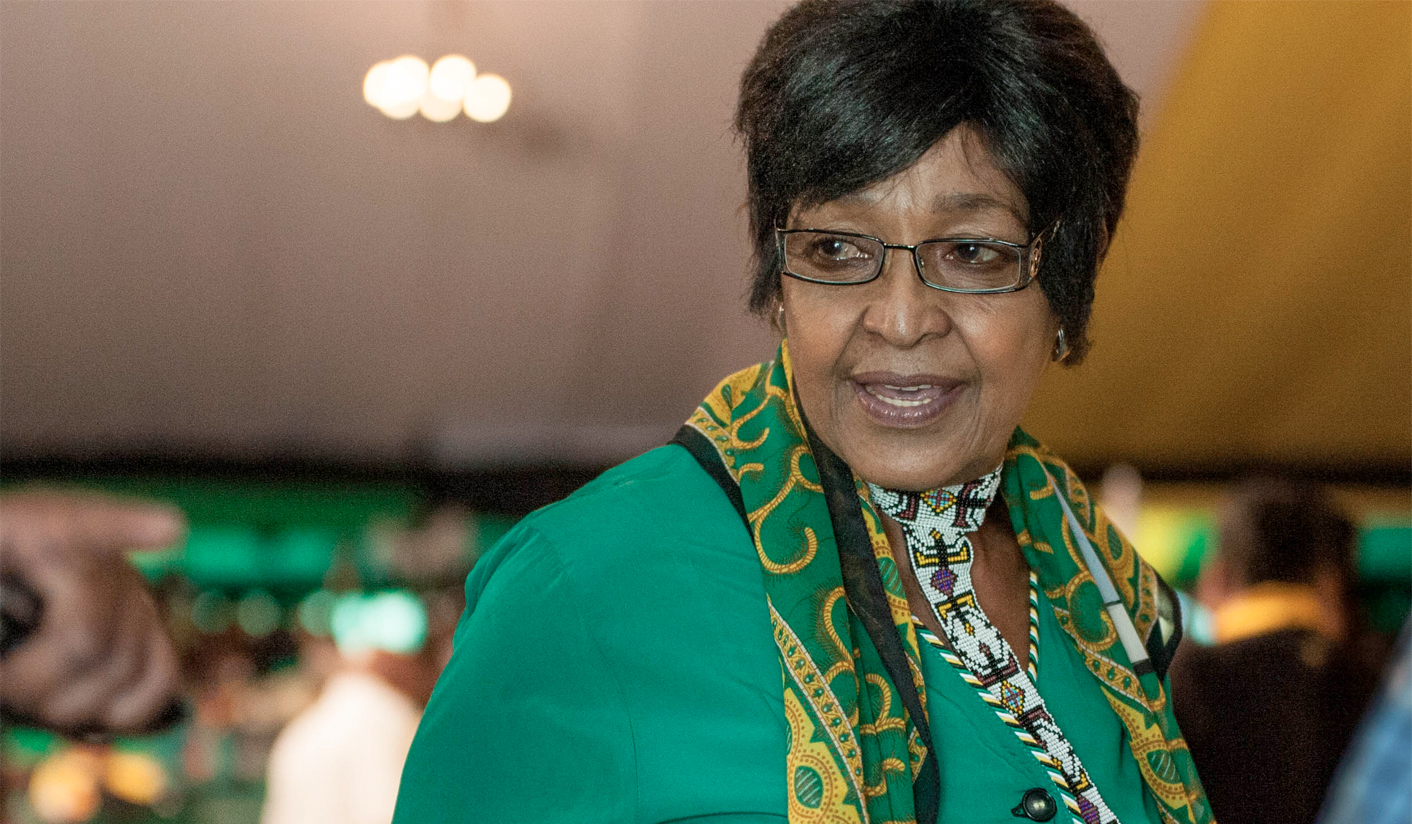 A British journalist researching a book on the Mandela United Football Club has come forward with some significant claims about the disappearance of two youths linked to Winnie Madikizela-Mandela in the late 80s. He alleges on the basis of reports from the families that the National Prosecuting Authority has found the bodies of Lolo Sono and Siboniso Tshabalala and plans to exhume them in January. By REBECCA DAVIS.

Fred Bridgland is a veteran foreign correspondent who has spent more than three decades covering African affairs for, among others, Reuters. He was responsible for exposing South Africa’s secret invasion of Angola at a time when official reports denied that South Africa had any troops in Angola at all, and he subsequently wrote a book about the Angolan war, The War for Africa. Bridgland is thus no stranger to sensational scoops, and when he brought the Scottish Sunday Herald newspaper his claims about the re-opening of a murder case linked to Winnie Madikizela-Mandela this weekend, he was given the the front page.

Bridgland has said that he finds it bemusing that the South African media never followed up on some of the incidents around the Mandela United Football Club in the late 1980s. Perhaps this was partly to do with a lack of sources willing to talk: it seems clear that there were people who held information, but were too frightened to reveal it. Bridgland has had two major sources for this current scoop. One is Caroline Sono, a Soweto priest who was the stepmother of disappeared youth Lolo Sono, with whom Bridgland has built up a relationship of trust over many years. But the source who got him into the material in the first place is Katiza Cebekhulu, who Bridgland describes as “the key missing witness from Mrs Mandela’s Stompie trial”.

Emailing the Daily Maverick from Edinburgh, Bridgland explained: “I first smelled something fishy when so many of the witnesses at Mrs Mandela’s trial for kidnapping and assaulting Stompie Moeketsi [also known as Stompie Seipei] went missing.” With what he calls “a mixture of luck and journalistic nous”, Bridgland managed to track down Cebekhulu to a Zambian prison, where Bridgland claims “he had been put without charge or trial by President Kenneth Kaunda at the request of the top ANC leadership, including Nelson Mandela, according to Kaunda when I interviewed him with a BBC TV team.”

Cebekhulu now lives in Britain, where he wrote the 50,000-word story of his life after learning to read and write English. “He asked me to help him knock it into publishable shape,” explained Bridgland, who agreed on the condition that he find “what happened to as many other people who suffered at the hands of Mrs Mandela and her Football Club and tell their stories, because no one in the South African media seemed to have bothered.” The subsequent book, Katiza’s Journey, was criticised at the TRC for factual inaccuracies, something Bridgland contests. Nonetheless, it was the telling of Cebekhulu’s story that led Bridgland to investigate the other mysteries around the Mandela United Football Club.

A TRC investigation into Mandela’s football team published in 1998 provides a useful history of events (http://kaganof.com/kagablog/2008/01/09/special-investigation-into-the-mandela-united-football-club/). The Mandela United Football Club (MUFC) was formed in 1986 after Winnie Madikizela-Mandela helped resolve an internal conflict within the Orlando West branch of the Soweto Youth Congress. Some of the football team members subsequently moved into the outbuildings of Madikizela-Mandela’s home in Orlando West. Over the next few years, however, tensions escalated between the MUFC and the community to the extent that the Mandela house was burned down in 1988.

Madikizela-Mandela and a number of MUFC members found new premises, but the tensions continued. In February 1989, the Mass Democratic Movement released a statement slamming the behaviour of MUFC: “The recent conflict in the community had centred largely around the conduct of her so-called football club, which has been widely condemned by the community. In particular, we are outraged by the reign of terror that the team have been associated with. Not only is Mrs Mandela associated with the team, in fact, the team is her own creation.”

The TRC report found that between August 1988 and the end of February 1989, “the residents and associates of the Mandela household, including Ms Madikizela-Mandela herself, were implicated directly or indirectly in a range of incidents – including assaults and abduction, and the murder and attempted murder of at least a dozen individuals”. The most high-profile case among these was the murder of 14 year-old Stompie Seipei. In 1991, Madikizela-Mandela was convicted of kidnapping and being an accessory to assault in the Seipei case, and received a six-year jail term which was reduced to a fine and a two-year suspended sentence on appeal.

But the case with which Fred Bridgland is concerned at the moment involves the disappearance of Lolo Sono and Sibuniso Tshabalala, who were last seen in Madikizela-Mandela’s Soweto home in November 1988. Sono and Tshabalala had been at the home of Jerry Vusi Richardson, the MUFC “chief coach”, on 9 November, when a police SWAT team raided it. Sono and Tshabalala watched the police raid take place, and their presence at the home seems to be what led to their subsequently being labelled as spies. Three days later, Sono disappeared.

When Sono’s father Nicodemus (who has recently passed away) testified before the TRC in 1997, he said that four days later, Winnie Madikizela-Mandela and members of the MUFC arrived at Sono’s home bearing his son at gunpoint, and demanded that Nicodemus hand over documents. Nicodemus said that it was clear his son had been badly beaten. Lolo managed to tell his father that he had gone to Madikizela-Mandela’s home freely because he wanted to join the armed struggle. Lolo was then taken away again by Madikizela-Mandela and her entourage and never seen again. The later testimony of MUFC members to the TRC matched that of Nicodemus Sono, with one saying that he had heard Madikizela-Mandela ordering that Lolo be killed.

Nomsa Tshabalala, mother of Lolo’s friend Sibusiso, told the TRC that her son went to Madikizela-Mandela’s house the following day to try to find out what had happened to Lolo. Tshabalala testified that she received one phone call from her son, saying he was at the house with Lolo, before the phone went dead.

In his application to the TRC for amnesty, Richardson made a statement that he had killed Sono, and that another MUFC member had killed Tshabalala, with both youths kept for several days at Madikizela-Mandela’s house with their hands and feet bound. But Bridgland points out that it would have been impossible for Richardson to have killed Sono, because Richardson (a police informer) was in detention at the time of his disappearance.

The TRC concluded that “Madikizela-Mandela must accept responsibility for the disappearance of Lolo Sono and Sibusiso Tshabalala”. But the families of the victims have never considered this sufficient redress. Caroline Sono, Lolo’s stepmother, told Bridgland that “There seems to be no justice in this world, because once the TRC was over and we had given our evidence, nobody in power contacted us. Winnie seems untouchable.”

But now the families may have been given new hope. Bridgland reports that the families have been told by the NPA that the bodies of the two youths have been identified and will be exhumed in January. Family members say they have already been DNA-tested to facilitate a forensic autopsy.

The plot thickens, however. The NPA did not respond to the Daily Maverick’s queries on the subject, but spokesman Makhosini Nkosi told the Daily Dispatch that possible burial sites were being examined “on the basis of recently obtained information”, but denied that a positive identification of a particular burial site had been confirmed. Nkosi also said that it was “standard practice” for the Missing Persons Task Team to take DNA from family members of missing individuals in case their remains turned up. He said that if an exhumation was planned, the media would be notified.

But the family members’ account to Bridgland suggested an alternative, more sinister version of events. Lolo Sono’s mother Dorothy told Bridgland that the NPA had informed them that “Because the ANC are still busy with this Mangaung thing, they said that we must wait until January next year.” Caroline Sono, Lolo’s stepmother, also told Bridgland that the NPA had warned the parents not to say anything publically about the exhumation plan.

Bridgland says it is not up to him, as a foreigner, to speculate about why the NPA would insist that the parents remain silent. But he is fairly certain as to how Winnie Madikizela-Mandela will respond to any new allegations against her. “At the TRC [Madikizela-Mandela] was asked if everyone was lying about her. Yes, she replied,” he said. “I have no doubt that that is how she will reply to any allegations now made against her by South Africans. I am making no allegations personally or calling for prosecution. I prefer to let the facts stand for themselves.” DM

The city of Johannesburg on a tight deadline to approve budget

Play it safe: Keeping our distance from the elderly could be saving their lives

Centre for Analytics and Behavioural Change
Save 7 mins