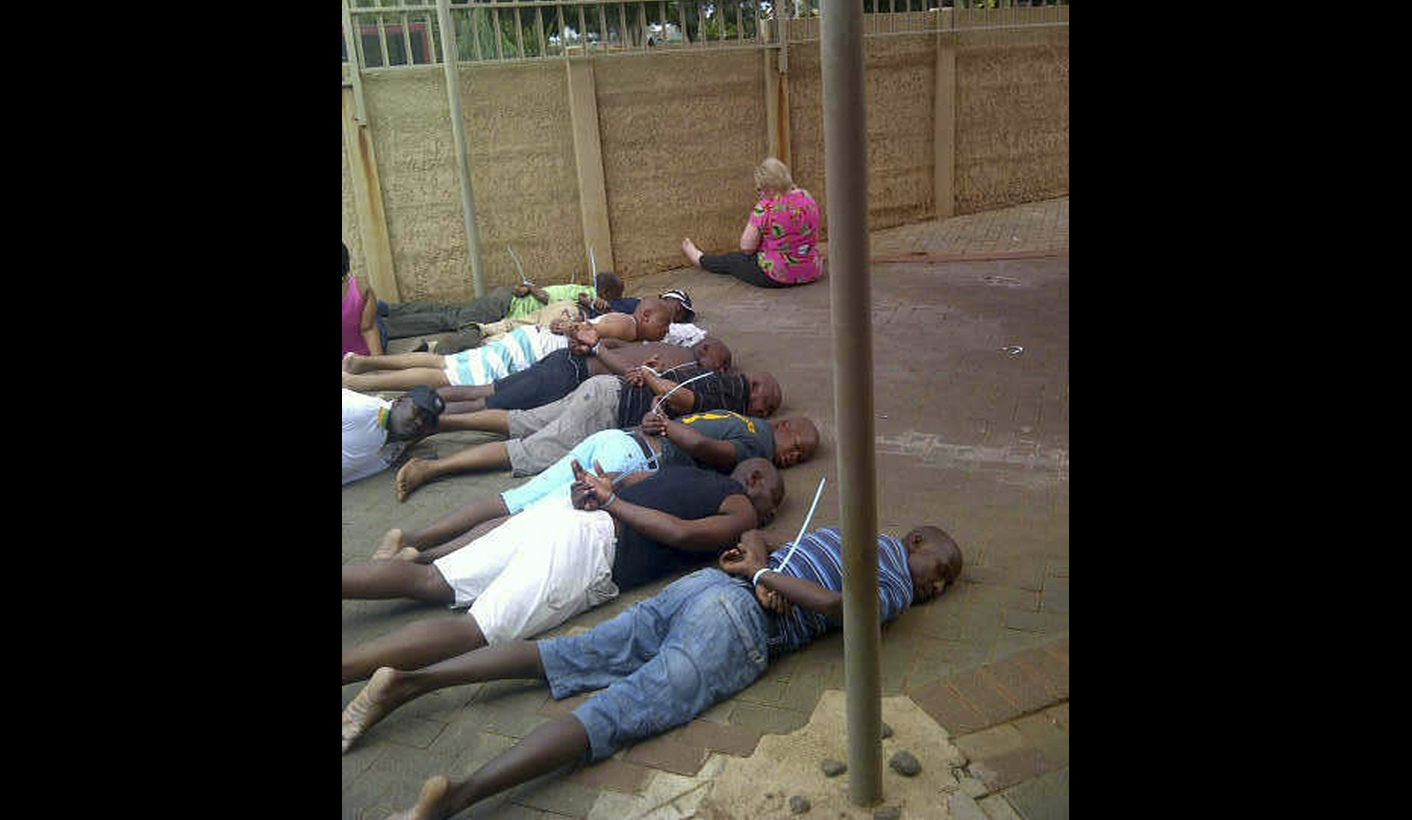 A group of ANC delegates from North West told NewsFire they were illegally detained and beaten by police, and that their accommodation in Bloemfontein was searched without a warrant. These delegates are aligned with the ‘Forces of Change’ faction of the party and were denied accreditation at the beginning of the ANC’s elective conference in Mangaung. By GREG MARINOVICH and THAPELO LEKGOWA/NewsFire.

According to the group, police arrived at their house in Bloemfontein on Wednesday afternoon. Police were allowed onto the property, yet proceeded to kick down the door to the house and search it. Police claimed to be looking for “weapons and heavy weapons”, but found nothing.

In the course of the raid, the people in the house were told by police to strip off their shirts and were then taken outside and forced to lie on the ground, where their hands were bound behind their backs with cable ties. One person, too scared to allow NewsFire to use his name, claims that he was kicked in the mouth by police.

A resident at the delegates’ house said that this raid followed a raid on Monday in which police without a warrant wanted to search the house and cars for weapons, which the delegates allowed. Nothing was found.

Volksblad, a Bloemfontein newspaper, reported on the Monday raid earlier in the week, saying that a group of ANC delegates were targeted by heavily armed police looking for weapons.

Delegates detained in Wednesday’s raid told NewsFire that the raid was conducted by regular South African Police Service (SAPS) officers accompanied by men in camouflage uniform and wearing balaclavas. The only police unit known to wear camouflage uniform is the Strategic Task Force, an elite unit of less than a hundred members countrywide, who undergo rigorous training akin to the military reconnaissance unit.

The delegates from the North West are aligned with the ‘Forces of Change’ faction of the ANC who are opposed to President Jacob Zuma’s second term as ANC president, and believe they are being persecuted for supporting Zuma’s opponent Deputy President Kgalema Motlanthe.

The ANC in the North West is split between pro- and anti-Zuma factions. The faction supporting Zuma is led by Supra Mahumapelo, the provincial chairperson. The faction against Zuma is led by Kabelo Mataboge, the provincial secretary who survived an attempted assassination a few weeks ago. Mataboge, representing 700 disgruntled North West ANC members, led an unsuccessful legal challenge to obtain an interdict preventing provincial delegates from attending the national conference in Mangaung, on the basis that the nomination processes had been unlawful.

During the North West provincial delegate nomination process, Mataboge claims that he was locked in a room to prevent his participation. Last week, he was suspended from the ANC and on Sunday evicted from the national conference venue in Mangaung. The grounds for his suspension remain unclear, but he believes it was motivated by his vocal support of Zuma’s opponent Kgalema Motlanthe as well as his high-profile involvement in the legal challenge.

Police were approached for comment, but had not responded by the time of publication. DM