ANC’s conflict with the South African Council of Churches: The Origin 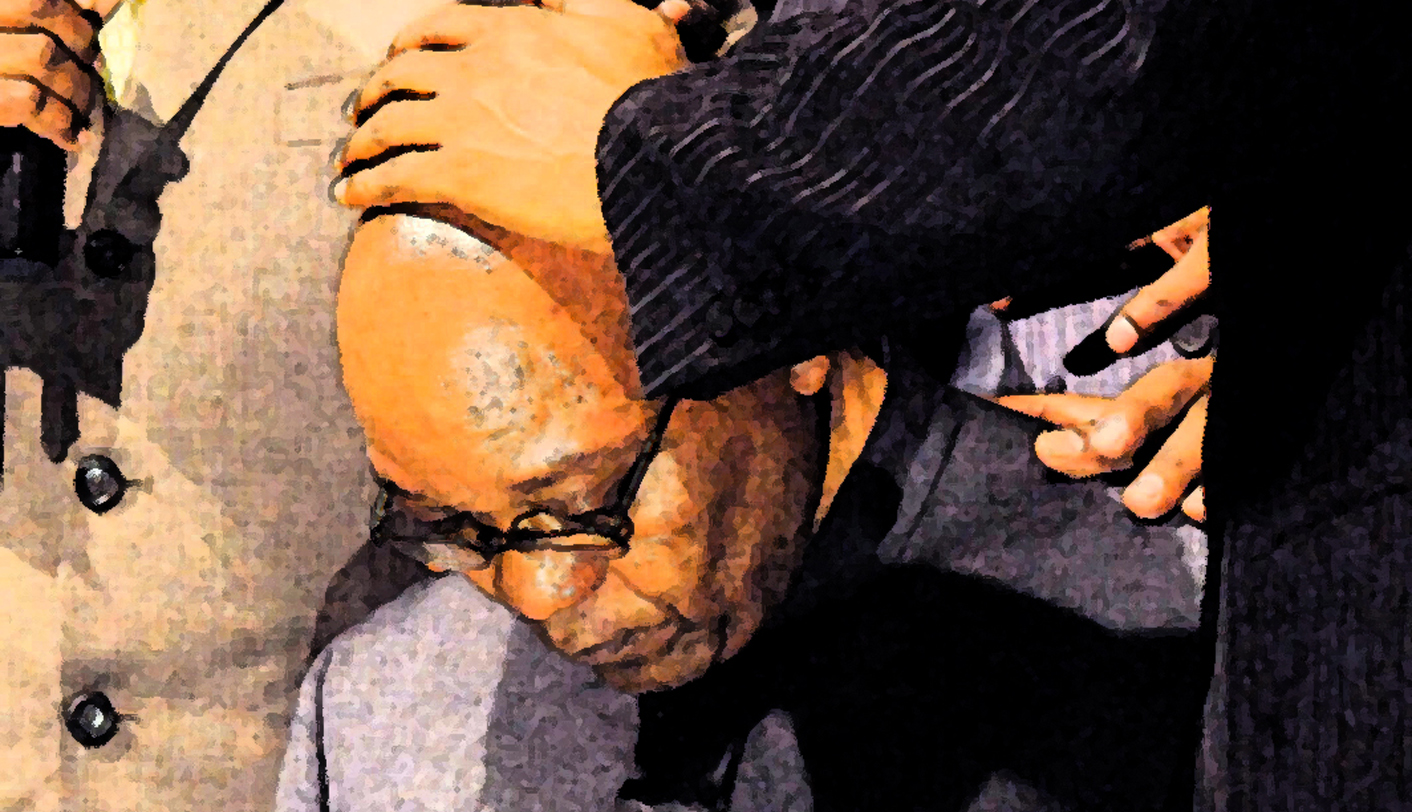 A bitter war of words has erupted between traditional church leaders and the ANC, mere days before Mangaung. It isn’t the first time they faced off, and it won’t be the last. Jacob Zumu jilted the South African Council of Churches and Kairos Southern Africa a while back in favour of a more conservative, charismatic and Pentecostal alliance. Zuma’s spiritual kinship is with those religious friends who don’t criticise his politics. By MANDY DE WAAL.

When Gwede Mantashe on Tuesday gave those “vitriolic” local clerics what for, he didn’t hold back. Still, the word “mischievous” was expected, because it’s the standard ANC catchall that seems to go with every Mantashe finger wagging.

“We don’t want bishops to be mudslinging with the ANC, because if that begins, there will not be any difference — we will look the same,” the ruling party’s general secretary was reported to have said at an impromptu media conference, and added: “Somebody who taught me some politics, said to me, if you are delivering the post in the streets and a dog comes out to bite you, don’t go on your knees as well and bite it. You stand up and beat it on your feet so the people can see that a dog is biting a person. That is the appeal we are making; we must not all be relegated to crawling on our knees.”

Earlier, Anglican Archbishop Thabo Makgoba of the Church Leaders Consultation, Bishop Joe Seoka of the SA Council of Churches, Rev Moss Nthla of The Evangelical Alliance of SA and the Rev Edwin Arrison of Kairos SA had penned a lengthy letter to Jacob Zuma, in which they warned that the country was at a crisis point, and was sliding into a state of “moral decay”.

“Some political leaders are working hard and doing their best to serve the people, and for this we are grateful. But we believe too many are self-serving and arrogant. We ask you: do you not understand that many of your words and actions are leading many South Africans towards cynicism and away from hope? And do you not understand that you are setting yourselves up against the arc of history, which is always bent towards hope?” the four clerics wrote.

“Do you also not understand that lack of decisive action, where [the] waste of public resources has been revealed, leads to a culture of impunity and immunity where the poorest once again become the main victims of bad governance? To reverse what is happening, we urge you to recognise the loss of hope and the growth of cynicism and anger, of which Marikana and now De Doorns are massive signals,” the letter reads.

And then comes one of the most telling paragraphs in the missive addressed to Zuma: “We urge you to exercise the authority and power you have with the grace with which it was bestowed on you, addressing and repenting of corruption and self-service. Abuse of power is irresponsible, and you need to know that as people entrusted with power from above, you are held doubly culpable for such abuse.”

In his response, Mantashe may as well have told the religious leaders to keep their noses out of government business. “ANC members go to church; they are social beings, they are economic beings, and they can be influenced there,” the ANC general secretary said.

This is not the first stand-off between these religious leaders and the ruling party. In June 2009, Zuma was speaking in Mpumalanga when he said: “God expects us to rule this country because we are the only organisation which was blessed by pastors when it was formed. It is even blessed in Heaven. That is why we will rule until Jesus comes back. We should not allow anyone to govern our city when we are ruling the country.”

The traditional religious leaders reacted, with Anglican Archbishop Thabo Makgoba calling the President’s claims anachronistic and dangerous. The ANC said that the SACC didn’t understand the context the president was using, while Zuma benefactors and allies, the Friends of Jacob Zuma Trust, accused the SACC of trying to “privatise” Jesus and turn Christianity into a cult.

The massive irony is that in the run-up to Polokwane, Zuma had met with religious leaders and had been to places of worship in all of SA’s provinces, and his statement was part of a celebratory tour to thank locals for voting him into power after his bruising pre-Polokwane battles. But in lobbying for religious support before the general election, Zuma was very cunning about which Christians he got into bed with.

“There is no doubt that under the leadership of Jacob Zuma, there has been a shift in ANC allegiances to the more Pentecostal, Evangelical, Charismatic and African independent churches. This is a very broad range of churches, but they are characterised by being more conservative generally, and many of them fall under the alliance that Ray McCauley is involved with, while the African Independent Churches would have their own organising institutions,” said Professor Gerald West of the University of KwaZulu-Natal’s school of religion and theology.

McCauley helped found the National Religious Leaders’ Forum shortly after Zuma took office in 2009, and one of the religious body’s first moves was to lobby for the abolition of laws that offended the churches’ more conservative sensibilities, like laws legalising abortion and same sex marriage. The forum’s hand strengthened shortly afterwards, when it merged with the National Interfaith Leadership Council to form the National Interfaith Council of South Africa (NICSA). The organisation includes representation from mainstream and charismatic religious churches, as well as from African indigenous churches, the Jewish, Muslim, Pentecostal and Hindu faiths.

But tensions started to fester under the Mbeki regime, because government at the time tried to co-opt the SACC, to ensure it didn’t speak out against the state, and goaded the more traditional church leaders to stand in solidarity with the state. “I think the SACC became increasingly uncomfortable with what they saw as an attempt to silence them,” West explained.

The relationship between the SACC, Kairos and Zuma brought dramatic changes because the incumbent president snubbed these religious leaders in favour of the more conservative, charismatic and African independent churches. “Under the leadership of Jacob Zuma, the SACC has felt somewhat spurned; they felt neglected. They felt that their traditional engagement with the state was minimised, so part of their reaction is out of a sense of frustration that they are being ignored,” West said. “Zuma started courting the more conservative Christian traditions; largely, I think, because these are the sectors of religion that don’t take the state on (criticise government) in structural terms,” he added.

How these religious bodies view their role in society is a key point in the schism between the state and the SACC/Kairos, and largely defines the two religious camps. The churches in Zuma’s camp focus on personal salvation or the religion of the individual, while the SACC and Kairos go beyond the personal to issues of the collective. “This is the key point – the emphasis of the mainline churches, in theological language, has not only been personal sin, but also structural sin. Apartheid was seen as structural sin – it wasn’t just bad people, it was a structure that was bad. That is why the World Alliance of Reformed Churches called Apartheid a heresy; it was a structural sin, a structural evil,” West explained.

Traditional churches have a history of dealing with structural issues, although not all churches followed this route. The likes of Bishop Desmond Tutu, the late Bishop Trevor Huddleston and Reverend Frank Chikane were clerics who were courageous and active anti-Apartheid activists. The spirit of this watchdog role, and crusading against ‘sinful state structures’ is very clearly defined in a Kairos Document penned in 1985, entitled The Challenge to the church: A Theological Comment on the Political Crisis in South Africa.

“The Kairos document was very clear about this in that it made a distinction between prophetic theology (theology which dealt with the structural dimension of evil and sin) and church theology (that which dealt with the original or personal sin). I would say that where we have shifted since liberation, is that the strongest forms of Christianity in South Africa today are what the Kairos document would call church theology – they are most comfortable dealing with the personal or the individual, and they don’t speak stridently into the political and the economic,” West added.

The Evangelical, Pentecostal, charismatic churches and new forms of Christianity evident in inner city ‘store-front churches’ imported from Africa, focus strongly on the personal. “I would say even within those churches, there has been a waning of what the Kairos document would call the prophetic. So even these churches would mostly emphasise the individual: personal sin, personal failing, and personal corruption becomes the emphasis rather than structures that allow individuals to be corrupt,” West said.

A case in point is the manner in which the National Interfaith Leaders’ Council dealt with Zuma’s affair with Sonoco Khoza, the daughter of soccer luminary Irwin Khoza. The religious council urged South Africans to forgive Zuma. “We accept the public outrage that you cannot undermine. But it is important that we call on South Africans to look at bigger issues that confront the country. Our different faiths teach us that once the person does the confessing, as the President has, we must do the absolving. There is no limit to forgiveness. In terms of the Bible you have to forgive 70 x 70 and it is that basis from which we come,” a spokesman for the council said.

And that is why Mantashe was so furious with those “mischievous” clerics who dared to stick their noses into the government’s business, and to speak out against the president and the ruling party mere days before Mangaung. Couldn’t they take a leaf out of the good charismatic’s book, keep mum and make them selves useful by passing around the collection tray? DM