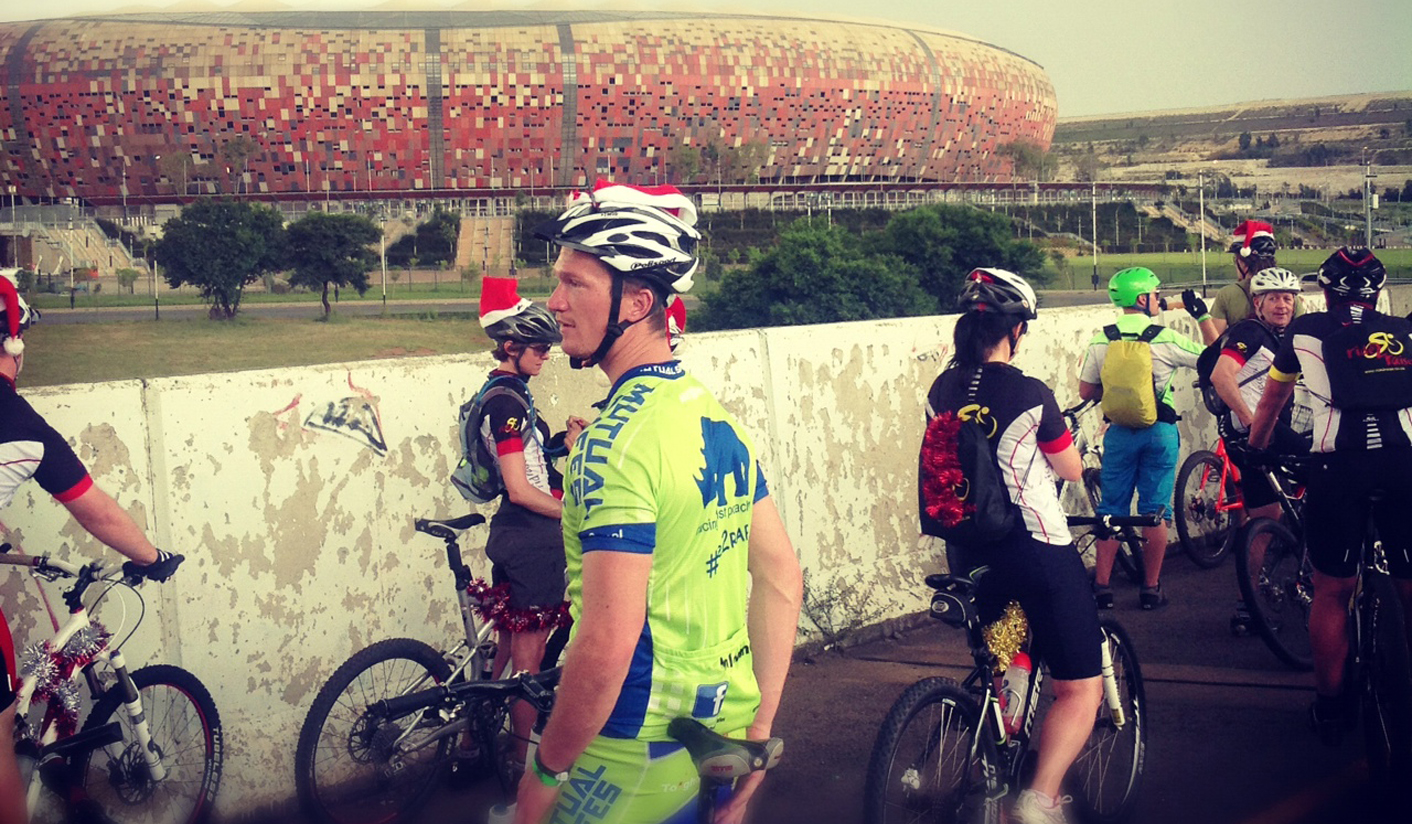 On Sunday, the streets of southern Johannesburg were besieged by people in funny hats on bicycles. Here’s why. By RICHARD POPLAK.

So begins the silly season. Perhaps it was the fellow in the lime-green skintight onesie, or the girls with angel wings, or portly fellow in the Santa hat overworking his mountain bike frame. Whatever it was, the message was clear: Manguang, then eggnog. The year is done. Photo: This will never fly

I should explain. The first annual Ride2Raise Bara Christmas ride just unfolded in southern Johannesburg and Soweto on Sunday, and involved about 250 cyclists, many of whom piloted the dreaded single speed – the urban hipster’s preferred mode of transport. (Full disclosure: I have one.) The idea behind the event was to raise dough for, and deliver toys to, kids currently toughing it out in the Chris Hani Baragwanath Hospital’s burn ward. So people gathered, strapped toys to their backs, and prepared to ride from Braamfontein into Soweto, with the promise of beer and meat at the other end.

Photo: Where are the reindeer?

The principle behind the ride was to align it with the Critical Mass movement, a global cycling phenomenon that began in San Francisco and quickly spread to cities all over the world. They take place on the last Friday of every month, and often involve tens of thousands of people. In San Fran, it’s not uncommon to see participants wearing nothing more than a grin. There is no charge. Everyone is invited. The idea is to reclaim public space – that is, roadways – that have traditionally been denied to forms of transportation other than the car. Critical Mass has been rolling for 20 years; Joburg has had one for about a year.

Photo: The tinsel is for show

There is no doubt that Jozi could use a primer on sharing the road, especially because most of us will be pedaling or skateboarding our way to the office – should there be an office –in 20 years or so. I know, I know – that sounds so much like your hippy uncle Moonbeam sounding off at a wedding after rolling half a kilo of Durban Poison in a table cloth and getting the neighbourhood high. But bookmark this page, drop me a tweet or whatever in 2032, and let me know if I’m wrong.

Photo: Kitchener’s in Braamfontein, where carbohydrate based beverages come from

But the Jozi Critical Mass always had a different spin, so to speak.  Original chief facilitator James Happe pointed out that the local iteration, which boasted 20 or so cyclists and a rollerblader its first time out, is more about reuniting a much maligned downtown with a terrified populace, and making it plain that although Johannesburg faces innumerable challenges, it needn’t face them abandoned by those in the best position to contribute.

Photo: The teddy bear is an aftermarket accessory

The Bara Christmas Ride was organised in consort with the local Critical Mass people, but the focus on charity was something of a new spin. (The funny costumes, however, weren’t.) Still, the ethos remained. This was about charting a course from town into Soweto which, I needn’t point out, is not on the Momentum 94.7 route. This version of Critical Mass was about creating a bridge over a cultural gulf.

Photo: Ready or not…

So at 14:00 sharp, off we went, backed up by a motorcycle motorcade, and a guy with an iPod and amplifier hooked up to a trailer on his mountain bike. His playlist brought to mind a frat party in 1992, and reminded one of how much truly atrocious music Phil Collins recorded before he mercifully disappeared. Through Braamfontein, we rode, and south towards Soccer City.

Photo: Where Bafana Bafana are unlikely to ever score another goal

We drifted, slowly – very, very slowly – through parts of Johannesburg that are not exactly bike friendly. Most of the locals were friendly, but I’d be lying if I said there wasn’t a little frustration here and there. It’s Sunday, and drunk drivers have their next bar to hit. I get it. I do.

Photo: Just in case we forgot what country we were riding through

Our first stop was Chris Hani Baragwanath Hospital, and the Johnson & Johnson burn ward. There we dropped off our goody bag of toys for the kids, and paused for unearned Cokes and water. The pace was a blistering 12km an hour, and by this time we had collectively burned about 60 calories. A workout this wasn’t, but the objective was reached – huzzahs all round.

Then, because the participants were predominantly white, it made sense to acquire a sanitised dose of Soweto culture, delivered via the over-grilled chisanyama at Chaf’s Pozi, where possibly more Germans have eaten than locals. By this time, the rain was coming down with a ferocity that reminded me of the old Yiddish saying, roughly translated as: No good deed goes unpunished. A massive drop in temperature implied hypothermia, but cycling is a tough sport, and we knew that going in.

And then we rolled slowly back to Johannesburg, a few injuries, but no casualties. Another Critical Mass event successfully concluded, Johannesburg a little more like San Francisco, and our bikes considerably dirtier. But the Raise2Ride folks can congratulate themselves for a job well done. Lots of cash poured into Bara, and a klatch of happy kids who, when they are one day behind the wheel of their own vehicles, may think twice about slaying a cyclist. DM