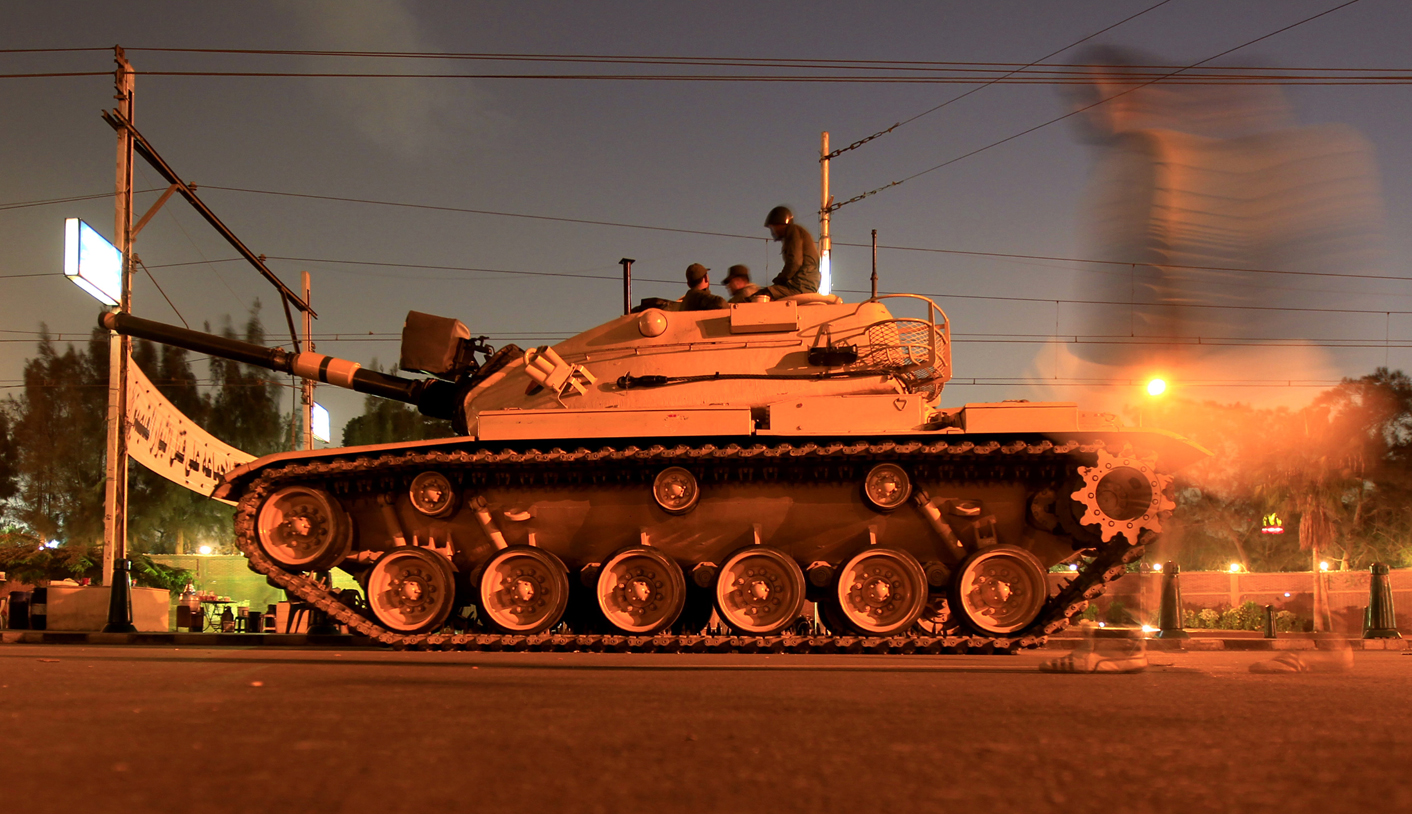 Egypt's Islamist president has given the army temporary power to arrest civilians during a constitutional referendum he is determined to push through despite the risk of bloodshed between his supporters and opponents accusing him of a power grab. By Alistair Lyon and Marwa Awad.

The elite Republican Guard has yet to use force to keep protesters away from the palace, which it ringed with tanks, barbed wire and concrete barricades after last week’s violence.

Mursi, bruised by calls for his downfall, has rescinded a Nov. 22 decree giving him wide powers but is going ahead with a referendum on Saturday on a constitution seen by his supporters as a triumph for democracy and by many liberals as a betrayal.

A decree issued by Mursi late on Sunday gives the armed forces the power to arrest civilians and refer them to prosecutors until the announcement of the results of the referendum, which the protesters want cancelled.

Despite its limited nature, the edict will revive memories of Hosni Mubarak’s emergency law, also introduced as a temporary expedient, under which military or state security courts tried thousands of political dissidents and Islamist militants.

But a military source stressed that the measure introduced by a civilian government would have a short shelf-life.

“The latest law giving the armed forces the right to arrest anyone involved in illegal actions such as burning buildings or damaging public sites is to ensure security during the referendum only,” the military source said.

“The armed forces will work within a legal framework to secure the referendum and will return (to barracks) as soon as the referendum is over,” Ali said.

Protests and violence have racked Egypt since Mursi decreed himself extraordinary powers he said were needed to speed up a troubled transition since Mubarak’s fall 22 months ago.

The Muslim Brotherhood has voiced anger at the Interior Ministry’s failure to prevent protesters setting fire to its headquarters in Cairo and 28 of its offices elsewhere.

Critics say the draft law puts Egypt in a religious straitjacket. Whatever the outcome of the referendum, the crisis has polarised the country and presages more instability at a time when Mursi is trying to steady a fragile economy.

On Monday, he suspended planned tax increases only hours after the measures had been formally decreed, casting doubts on the government’s ability to push through tough economic reforms that form part of a proposed $4.8 billion IMF loan agreement.

Rejecting the referendum plan, opposition groups have called for mass protests on Tuesday, saying Mursi’s eagerness to push the constitution through could lead to “violent confrontation”.

Islamists have urged their followers to turn out “in millions” the same day in a show of support for the president and for a referendum they feel sure of winning with their loyal base and perhaps with the votes of Egyptians weary of turmoil.

The opposition National Salvation Front, led by liberals such as Mohamed ElBaradei and Amr Moussa, as well as leftist firebrand Hamdeen Sabahy, has yet to call directly for a boycott of the referendum or to urge their supporters to vote “no”.

Instead it is contesting the legitimacy of the vote and of the whole process by which the constitution was drafted in an Islamist-led assembly from which their representatives withdrew.

The opposition says the document fails to embrace the diversity of 83 million Egyptians, a tenth of whom are Christians, and invites Muslim clerics to influence lawmaking.

But debate over the details has largely given way to noisy street protests and megaphone politics, keeping Egypt off balance and ill-equipped to deal with a looming economic crisis.

Mursi issued another decree on Saturday to supersede his Nov. 22 measure putting his own decisions beyond legal challenge until a new constitution and parliament are in place.

While he gave up extra powers as a sop to his opponents, the decisions already taken under them, such as the dismissal of a prosecutor-general appointed by Mubarak, remain intact.

Lamia Kamel, a spokeswoman for former Arab League chief Moussa, said the opposition factions were still discussing whether to boycott the referendum or call for a “no” vote.

“Both paths are unwelcome because they really don’t want the referendum at all,” she said, but predicted a clearer opposition line if the plebiscite went ahead as planned.

A spokeswoman for ElBaradei, former head of the U.N. nuclear watchdog, said: “We do not acknowledge the referendum. The aim is to change the decision and postpone it.”

Mahmoud Ghozlan, the Muslim Brotherhood’s spokesman, said the opposition could stage protests, but should keep the peace.

“They are free to boycott, participate or say no, they can do what they want. The important thing is that it remains in a peaceful context to preserve the country’s safety and security.”

The army stepped into the conflict on Saturday, telling all sides to resolve their disputes via dialogue and warning that it would not allow Egypt to enter a “dark tunnel”.

A military source said the declaration read on state media did not herald a move by the army to retake control of Egypt, which it relinquished in June after managing the transition from Mubarak’s 30 years of military-backed one-man rule.

The draft constitution sets up a national defence council, in which generals will form a majority, and gives civilians some scrutiny over the army – although not enough for critics.

In August Mursi stripped the generals of sweeping powers they had grabbed when he was elected two months earlier, but has since repeatedly paid tribute to the military in public.

So far the army and police have taken a relatively passive role in the protests roiling the most populous Arab nation. DM

Photo: A man walks past an army tank from the republican guard in front of the presidential palace in Cairo December 10, 2012. Egypt’s Islamist President Mohamed Mursi has given the army temporary power to arrest civilians during a constitutional referendum he is determined to push through despite the risk of bloodshed between his supporters and opponents accusing him of a power grab. REUTERS/Mohamed Abd El Ghany